Trump’s own defense secretary has warned that this blind defense of Israel harms U.S. security.

On Wednesday, a U.N. agency published a report noting that “Israel has established an apartheid regime that dominates the Palestinian people as a whole.” Yesterday, the author of that report, who has served as executive secretary of the United Nations Economic and Social Commission for Western Asia (UNESCWA) since 2010, Rima Khalef, resigned after the Trump administration, working in conjunction with Israel, pressured the U.N. secretary-general to demand that she withdraw the report.

Khalef, a Jordanian national who has served in multiple high government positions, refused the demand to repudiate her own report, instead choosing to resign. The report — which was co-authored by the Jewish American Princeton professor and former U.N. official Richard Falk, a longtime critic of Israeli occupation — has now been removed from the UNESCWA website.

What makes this event most remarkable is how unremarkable the report’s conclusion is: It’s a point that a former Israeli prime minister — as well as Trump’s own defense secretary — has made unequivocally. Back in 2010, Ehud Barak, Israel’s former prime minister and its most decorated soldier, explicitly warned that Israel was on a path to what he called a permanent “apartheid” state. As he put it: “As long as in this territory west of the Jordan river there is only one political entity called Israel it is going to be either non-Jewish, or non-democratic. If this bloc of millions of ­Palestinians cannot vote, that will be an apartheid state.” 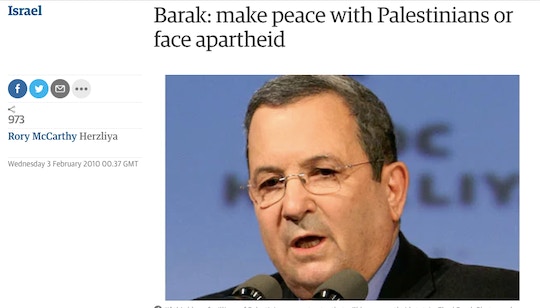 Seven years later, Israel is indisputably committed to exactly that outcome. Many of its key ministers do not even support a two-state solution. Israeli expansion of illegal settlements continues unabated. Palestinians are further away than ever from full political rights, or even enjoying the right of democratic self-determination. As Barak himself pointed out, this is the very definition of apartheid.

Yet now, thanks to the Trump administration’s self-destructive devotion to Israeli interests — an odd posture for a president who ran on a platform of “Putting America First” — it is impermissible for U.N. officials to note this reality lest Israel be offended. In its report on the ouster of Khalef, CNN was surprisingly blunt about what this all means:

Memo to critics of Israel inside the U.N. system: Prepare to pay a price. … The U.S. under Trump has made it quite clear it will defend Israel perhaps more than all other countries at the U.N.

Early on his campaign, Trump issued controversial positions about Israel, including his statement that the U.S. should be “neutral” in the Israel-Palestine conflict and his proclaiming his immunity to AIPAC influence. But, as I noted last July, once he secured the nomination, he quickly switched to the standard pro-Israel line, beginning with his Jared Kushner-written AIPAC speech, and then went even beyond U.S. orthodoxy on Israel by explicitly endorsing expansion of Israeli settlements.

Since his inauguration, all signs indicate Trump will be an inflammatory fanatic when it comes to U.S. support for Israeli aggression, even at the expense of U.S. interests. He nominated a pro-settlement extremist to be his ambassador to Israel. He has repeatedly suggested that his son-in-law Kushner, whose family has long supported extremist settlements, will be his key envoy in the region. And he even appeared to abandon the long-standing U.S. rhetorical commitment to a two-state solution (a commitment it long ago abandoned in action), before his administration re-affirmed it.

What makes all of this most extraordinary is that Trump’s own Pentagon chief has previously warned that exactly this kind of mentality — defending Israeli aggression and expansion — is directly harmful to the U.S. At the Aspen Security Forum in 2013, Gen. James Mattis said:

I paid a military security price every day as the commander of CentCom because the Americans were seen as biased in support of Israel, and that moderates all the moderate Arabs who want to be with us, because they can’t come out publicly in support of people who don’t show respect for the Arab Palestinians.

Indeed, people charged with anti-U.S. terrorism frequently cite U.S. support for Israeli aggression as a key grievance. Moreover, Mattis “called the current situation in Israel ‘unsustainable’ and blamed the settlements for harming prospects for peace.” Most ironically of all, Mattis “called it a choice between giving up the idea of a Jewish state or becoming an apartheid state” — exactly the point the Trump administration is now trying to make unutterable at the U.N. Trump convinced millions of people to vote for him by promising to prioritize American interests over those of other nations. Yet what Trump is doing at the U.N., and in the Middle East more broadly, is exactly the opposite. He is empowering exactly the ideologues who have long venerated a defense of the Israeli government over all other considerations — not just the human and political rights of Palestinians but also the concrete security interests of the U.S.