Simply notifying people of drone strikes — and the lives they take — was previously deemed “excessively objectionable or crude.” 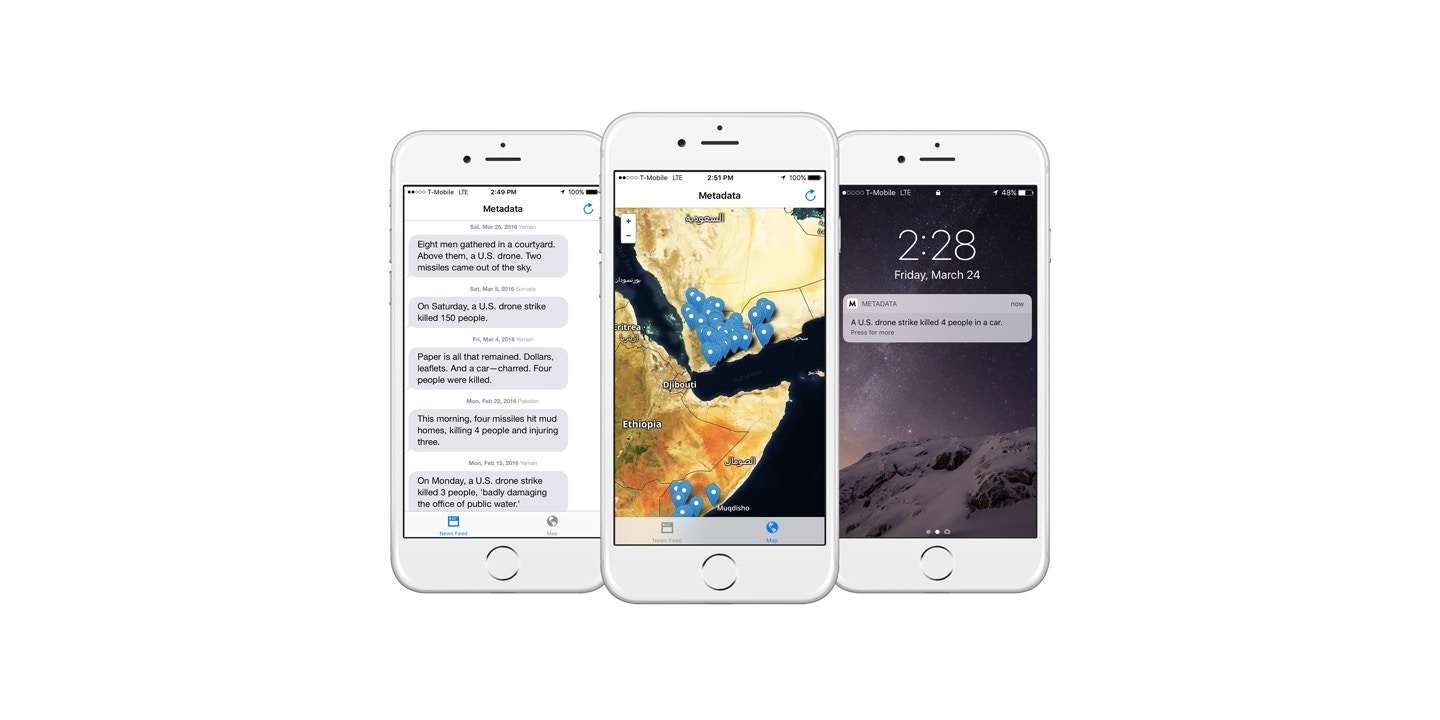 Five years ago, I made a simple iPhone app. It would send you a push notification every time a U.S. drone strike was reported in the news.

Over the years, I would occasionally resubmit the app, changing its name from Drones+ to Metadata+. I was curious to see if Apple might change its mind. The app didn’t include graphic images or video of any kind — it simply aggregated news about covert war.

At its core was a question: do we want to be as connected to our foreign policy as we are to our smartphones? My hypothesis was no. Americans don’t care about the drone war because it is largely hidden from view.

In 2014, after five rejections, Apple accepted the app. It remained in the App Store for about a year. According to Apple’s internal statistics, Metadata+ was downloaded by more than 50,000 people.

But the following September, Apple decided to delete the app entirely. They claimed that the content, once again, was “excessively objectionable or crude.”

Well, Apple’s position has evolved. Today, after 12 attempts, the Metadata app is back in the App Store. Wreckage of a vehicle in which Mullah Mansour was allegedly traveling after it was hit by U.S. drone on May 22, 2016, in Balochistan, Pakistan.

As an artist who works with data, I think the story of this app is about more than a petty conflict with Apple. It is about what can be seen — or obscured — about the geography of our covert wars.

For the past 15 years, journalists on the ground in Yemen, Pakistan, and Somalia have worked hard to uncover the contours of U.S. drone attacks — in some cases at their own peril. Filmmakers, academics, and attorneys have done important work documenting their ghastly aftermath. Websites like The Intercept have published whistleblower exposés about how the covert drone program clicks together.

But buried in the details is a difficult truth: no one really knows who most of these missiles are killing.

Because the particulars of the drone wars are scant, we only have ‘metadata’ about most of these strikes — perhaps a date, the name of a province, maybe a body count. Absent documentary evidence or first-person testimony, there isn’t much narrative to speak of.

The name ‘Metadata’ has a double meaning: the app both contains metadata about English-language news reports, and it refers to the basis on which most drone strikes are carried out. (As Gen. Michael Hayden famously said, “we kill people based on metadata.”)

Smartphones have connected us more intimately to all sorts of data. As Amitava Kumar put it recently, “The internet delivers ugly fragments of report and rumor throughout the day, and with them a sense of nearly constant intimacy with violence.” Yet information about drone strikes — in Apple’s universe — had somehow been deemed beyond the pale.

What would it mean to be more connected to our wars? Might our phones allow us to think more constellationally?

With a president who plans to lift the Obama-era constraints on drone strikes even further, declaring parts of Yemen and Somalia as “areas of active hostilities,” I’m glad that Apple has decided to stop blocking a news app.

If anything about the app is “excessively objectionable or crude,” perhaps it’s the airstrikes themselves.

Apple has removed Metadata from the App Store.