The latest attack in London shows, once again, that actual terrorists tend not to fit the anti-Muslim stereotypes that Islam-bashers propagate.

What do you think of when you hear the word “terrorist”? Big beards and brown skins? Turban-wearing Muslim migrants from the Middle East? Refugees maybe?

Yet according to a report from the New America Foundation, “every jihadist who conducted a lethal attack inside the United States since 9/11 was a citizen or legal resident.” A recent study in Britain, which last week endured its worst terrorist atrocity since 2005, revealed that more than two out of three “Islamism-inspired” terrorist offenses were carried out by individuals “who were either born or raised in the UK.”

The common stereotype of the Middle Eastern, Muslim-born terrorist is not just lazy and inaccurate, but easy fodder for the anti-immigrant, anti-Islam far right. Consider the swift reaction of White House official Sebastian Gorka to the horrific terror attack in London last week. “The war is real,” he told Fox News while the bodies of the victims were still warm, “and that’s why executive orders like President Trump’s travel moratorium are so important.”

Sorry, what? The 52-year-old perpetrator of the London attack, Khalid Masood, was born and brought up in the UK and would not have been affected in the slightest by a travel ban on Muslims from the Middle East. He was neither a refugee nor an immigrant. He was not of Middle Eastern origin either, and he was not even a Muslim for the vast majority of his life. Born to a white mother and black father as Adrian Elms, and raised as Adrian Ajao, he is believed to have converted to Islam in prison in 2003 and had a well-documented history of criminality prior to mowing down innocent pedestrians on Westminster Bridge, and stabbing a police officer outside the Houses of Parliament, last Thursday afternoon. 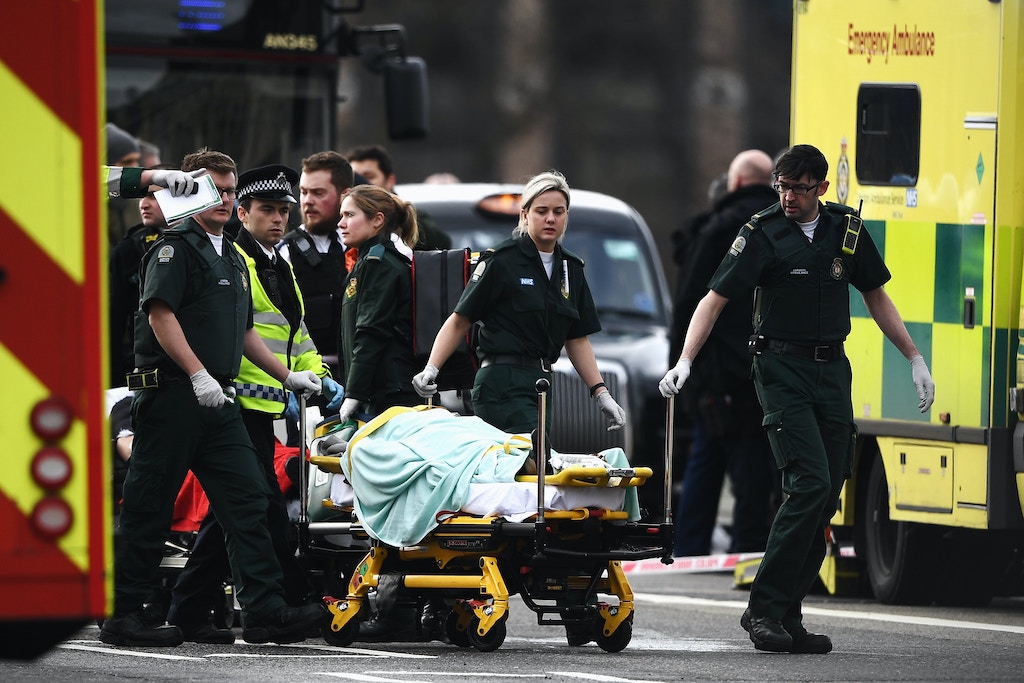 A member of the public is treated by emergency services near Westminster Bridge and the Houses of Parliament on March 22, 2017 in London.

Does it sound like I am trying to excuse or exculpate Islam and Muslims from responsibility for his heinous crime? You bet I am. And why shouldn’t I?

After all, was the Islamic faith at fault for Ajao’s first conviction, for criminal damage, in 1983 when he was aged 18? Was it the Prophet Muhammad who instructed him to deal drugs in his teens? Was it the Quran that inspired the drunken Ajao to slash a man across the face in 2000, leaving him needing more than 20 stitches? Was Ajao engaged in jihad when he stabbed a man in the nose in 2003, leaving him in need of cosmetic surgery?

No, no, no and no. Later, as Khalid Masood, he may have been radicalized by violent Islamists in a UK prison or by Salafi jihadists while visiting Saudi Arabia — we simply do not know and may never know — but what we can be sure of is that his violent tendencies and anti-social behavior long predated his conversion to Islam, “radical” or otherwise. As even the conservative British academic, and Christian blogger, Adrian Hilton conceded, “Adrian Elms was a violent Christian before he became Muslim terrorist Khalid Masood… Islam didn’t make him an evil bastard; he was already a nasty piece of work.”

As with other Muslim converts who have turned to terror, such as Canadian Aaron Driver and Texan John Georgelas, as well as the born-again types, such as the Kouachi brothers in Paris and the Tsarnaev brothers in Boston, a distorted, simplistic and politicized form of Islam may have provided Masood with a ready-made justification for his violence, but I doubt it was the main motivation. While politicians and pundits obsess over the role played by political ideology — Islamism — or religious faith — Islam — they conveniently if irresponsibly avert their gaze from other, perhaps more crucial factors. There is the role of social networks and family ties; issues of identity and belonging; a sense of persecution; mental illness; socio-economic grievances; moral outrage over conflict and torture; a craving for glory and purpose, action and adventure. These have proved to be much better predictors of terrorist tendencies than religion and, specifically, religiosity.

The headquarters of Britain’s MI6 intelligence agency in London in 2007.

Don’t take my (Muslim) word for it. In 2008, a leaked report by researchers for MI5, Britain’s domestic intelligence agency, found that “far from being religious zealots, a large number of those involved in terrorism do not practise their faith regularly,” according to the Guardian’s Alan Travis, who obtained, revealed and reported on the classified document, which is based on “hundreds of case studies” by the security service.

“They are mostly British nationals, not illegal immigrants and, far from being Islamist fundamentalists, most are religious novices,” wrote Travis, after reading the report, adding: “Very few have been brought up in strongly religious households, and there is a higher than average proportion of converts. Some are involved in drug-taking, drinking alcohol and visiting prostitutes.”

And the report had this as a kicker: “MI5 says there is evidence that a well-established religious identity actually protects against violent radicalisation.”

Over the past decade since the MI5 research was first leaked, more and more studies have challenged the conventional and lazy wisdom on the role of religion in the radicalization process. In recent years, I have spoken with a range of leading experts — anthropologist Scott Atran, psychiatrist Marc Sageman, historian Lydia Wilson — all of whom have interviewed “jihadi” terrorists, from the battlefields of Iraq to the prison cells of the United States, and all of whom agree that faith, Islamic or otherwise, is not the key driver of this latest wave of global terror.

“Terrorism is really political violence, first and foremost,” Sageman told me last year. Atran, when I interviewed him for my Al Jazeera English show in 2015, said, “If you dialogue with these people, if you look at how they actually move into ‘jihad’ … there is very little discussion of religion.”

Yet every major terrorist attack in the West is followed by a very public “discussion of religion.” How Islamic is ISIS? Does Islam require a reformation? Do Muslims pose a threat to liberal values? Should Western countries ban immigration from Muslim-majority countries? The streets are empty near Big Ben on the day following a terror attack outside parliament in London in 2017.

In fact, these days, members of the ‘Blame Islam’ crowd don’t even try and hide their evident glee when a terrorist attack occurs. They assume that the attacker’s Muslim name in and of itself is a vindication of their anti-Muslim bigotry. Their claim that “Islam is the problem” has now gone mainstream: it has a committed supporter in the White House, if not in Downing Street. The absence of clear and empirical evidence for their spurious theory of radicalization does not seem to bother them in the slightest. That most terrorists are “religious novices” and a “diverse collection of individuals, fitting no single demographic profile, nor do they all follow a typical pathway to violent extremism,” to quote MI5, is ignored or downplayed.

What was it Einstein once joked? “If the facts don’t fit the theory, change the facts.” Or deploy “alternative” ones, maybe. Such an approach makes sense if your aim is to demonize Islam and Muslims, no matter the cost. But if your aim is to prevent the next attack, this excessive focus on faith, on belief, on ideology — in defiance of the evidence and the experts — is a dangerous distraction. The terrorists may want to try and legitimize their violence by cynically appealing to Islamic motifs or doctrines, but there is no reason the rest of us should help them do it.

Top photo: An armed police officer stands guard near Westminster Bridge and the Houses of Parliament on March 22, 2017 in London after an attack.