At the height of the foreclosure crisis in 2009-10, Larry Summers broke promises to help homeowners while ignoring Wall Street’s criminality. As head of Barack Obama’s National Economic Council during 2009 and 2010 at the height of the foreclosure crisis, Larry Summers broke many promises to help homeowners while simultaneously dismissing Wall Street’s criminality. Now, after the Obama administration has left power and Summers has no ability to influence anything, he finds himself “disturbed” that settlements for mortgage misconduct are full of lies. Those of us who screamed exactly this for years, when Summers might have been able to do something about it, are less than amused.

In Wednesday’s Washington Post, Summers writes about a “large systematic overstatement” of the burden actually felt by banks in various mortgage settlements. Typically with these settlements, the Justice Department announces a headline dollar amount that the media uncritically prints in their headlines. But that number bears no relation to reality.

Indeed, large amounts of the settlements are directed for “consumer relief,” which banks have been from the beginning adept at gaming. Financial writer Yves Smith coined the phrase “bullshit to cash ratio” to describe the relationship between actual hard-dollar fines for banks and these noncash consumer relief measures.

Summers highlights an agreement last April, where Goldman Sachs needed to supply $1.8 billion in consumer relief to homeowners to settle claims that they swindled investors with mortgage-backed securities. But Goldman Sachs didn’t own any mortgages. So it bought distressed mortgages in bulk on the open market, for as low as 50 cents on the dollar. Then it modified the balance to, say, 60 cents on the dollar, satisfying the consumer relief while earning profit.

In other words, Obama’s Justice Department sentenced Goldman Sachs to make money. A more recent Deutsche Bank settlement allowed the bank to invest in hedge funds that do the same purchase-and-modify loan scheme, getting credit for $4.1 billion in consumer relief simply from the investment. Deutsche Bank is even looking to earn credit for consumer relief by indirectly funding new subprime loans, also a moneymaking activity. This is like sentencing a bank robber to open a lemonade stand.

“While there may have been some encouragement to principle (sic) reduction through these settlements,” Summers writes, “neither the cost to banks nor the incremental benefit to consumers is remotely comparable to the consumer relief figures advertised by both the DoJ and the banks.”

Larry Summers should be the last person expressing outrage about any of this. It was his indifference to the suffering of homeowners after the financial crash that led to this fake justice-by-settlement scheme. 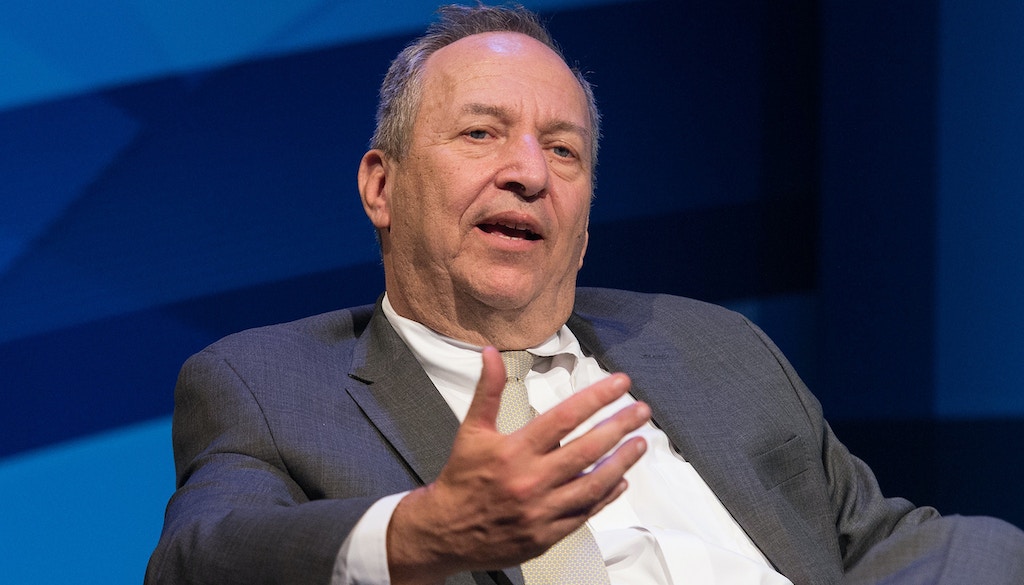 Former U.S. treasury secretary Larry Summers speaks during a discussion at the IMF/WB Spring Meetings in Washington, on April 16, 2015.

The week before Obama took office in 2009, when the incoming White House wanted the second half of the TARP bailout money released, Summers wrote a letter to Congress promising that “the Obama administration will commit substantial resources of $50-100B to a sweeping effort to address the foreclosure crisis.” He added that “we will implement smart, aggressive policies to reduce the number of preventable foreclosures by helping to reduce mortgage payments for economically stressed but responsible homeowners, while also reforming our bankruptcy laws.”

None of this happened. The ballyhooed $100 billion investment in mortgage mitigation ended up spending only $21 billion, and worse, was manipulated into a predatory lending program by mortgage servicers who had financial incentives to foreclose. The reform to bankruptcy laws Summers touted in his letter, which would have allowed judges to modify home mortgages, was something he actively opposed after Obama’s inauguration. Rep. Zoe Lofgren, D-Calif., publicly alleged that Summers “was not supportive of this,” and that he expressed doubts in private meetings.

Summers tries to separate himself from the Justice Department’s lies by saying, “Because of DOJ independence, my work in the White House gave me no window into specific cases.” But that’s completely untrue. When it was discovered that mortgage companies were using false documents to execute foreclosures, in violation of numerous legal statutes, Summers dismissed it.

As I reported in my book Chain of Title, Summers convened a presidential-level meeting about foreclosure fraud, and assured Obama that it represented no systemic threat to the economy. When Elizabeth Warren, then an assistant to the president, disagreed, laying out how it was a cover-up of a larger crime that deeply damaged homeowners, Summers made sure that Warren never showed up to subsequent meetings with the president.

The ignorance of the importance of this issue led directly to the Justice Department’s 2012 foreclosure fraud settlement, which uses the same obfuscation Summers laments in his editorial. That “$25 billion” settlement only cost banks $5 billion in hard dollars, the rest going to “consumer relief.” One million principal reductions were promised in this settlement; in the end, they went to just 83,000 homeowners, and banks paid much of the penalty with someone else’s money.

The very scheme that Goldman Sachs and Deutsche Bank are using to profit off of modifying home loans was something advocates for stronger intervention in the foreclosure crisis were pleading with the Obama administration to undertake when Summers worked there. The government could have bought up distressed loans and modified them to prevent foreclosures, something accomplished during the Great Depression through the Home Owner’s Loan Corporation (HOLC). One million loans were purchased and modified to keep people in their homes back then, and when the program ended in the early 1950s, it had turned a small profit.

But Summers recommended nothing of the sort, turning instead to failed programs that put hardly a dent in a crisis that saw over 9.3 million American families lose their homes. And he ignored the potential leverage policymakers would have had for better outcomes for homeowners when mortgage companies were caught with massive legal exposure.

This same person now laments the public relations strategies Obama’s Justice Department used to pretend they got tough on banks, when he’s completely implicated in the policies that ruined homeowners and let banks skate. This fits a typical dynamic for Summers, waiting until he has no power to reverse himself on policies he endorsed when in power.

You would think someone who failed so utterly on this score would be ashamed to opine on anything related to foreclosures. But shame is a rare commodity in Larry Summers’s Washington.

Still, while it’s galling that Summers waited until Obama left office to criticize his Justice Department over this, he at least honestly explained his perspective to Elizabeth Warren when she entered government:

He teed it up this way: I had a choice. I could be an insider or I could be an outsider. Outsiders can say whatever they want. But people on the inside don’t listen to them. Insiders, however, get lots of access and a chance to push their ideas. People — powerful people — listen to what they have to say. But insiders also understand one unbreakable rule: They don’t criticize other insiders.