Supporting savage dictators is not new for the United States. Trump just makes it harder to hide.

Egypt’s hideous tyrant, President Abdel Fattah el-Sisi, is in the U.S. to visit the White House on Monday and this is how the New York Times’s Paul Krugman depicted this event:

Another morning in Trump's America https://t.co/04xgTskZYP

Krugman believes — or at least wants his Democratic followers to believe — that supporting and praising savage despotism in Egypt is a new development that only happens in “Trump’s America.” The Washington Post’s neoconservative columnist Jackson Diehl this morning encouraged Post readers to believe in the same fairy tale, complaining in his column about the “ugly scene” of a “love-in” between Trump and “the most repressive dictator in Egypt’s modern history.”

What neither Krugman nor Diehl ever once mentions — either because they’re unaware of it or want to conceal it from their readers — is that the U.S. has been supporting, funding, and arming the Sisi tyranny for years under the Obama administration. In March 2015, as Sisi’s human rights abuses intensified, Obama personally told the Egyptian tyrant in a call the good news that he was lifting a ban “on the delivery of F-16 aircraft, Harpoon missiles, and M1A1 tank kits” and — in the words of the White House — “also advised President al-Sisi that he will continue to request an annual $1.3 billion in military assistance for Egypt.” In 2015, the official Twitter account of the U.S. Embassy celebrated the delivery of fighter jets to the Sisi regime and even encouraged people to watch a video of them majestically flying over Cairo:

Prior to Sisi, the U.S. — under Obama and multiple administrations before that — spent decades propping up the most savage tyranny in Egypt in the form of funds and weapons to Hosni Mubarak. Recall Hillary Clinton’s 2009 proclamation that “I really consider President and Mrs. Mubarak to be friends of my family,” while Obama ensured that the flow of money and weapons to Mubarak never ceased. In sum, aggressive support for savage despotism in Egypt is long-standing U.S. policy — not, as Krugman and Diehl want people to believe, some sort of new Trumpian innovation. As Mona Eltahawy put it in the New York Times last week: “Five American administrations, Democratic and Republican, supported the Mubarak regime.”

While it’s true, as Eltahawy notes, that Sisi had not been invited to the White House until now, the U.S. has hardly been shy about lavishing the tyrant with all forms of support. In 2014, as Sisi was crushing dissent and the state was issuing mass death sentences, Secretary of State John Kerry flew to Cairo to meet Sisi and publicly praised him — the leader of a military coup — for “transitioning to democracy.” Indeed, the year earlier, Kerry praised the Sisi-led military coup against Egypt’s first elected president, depicting it as an attempt to protect democracy. 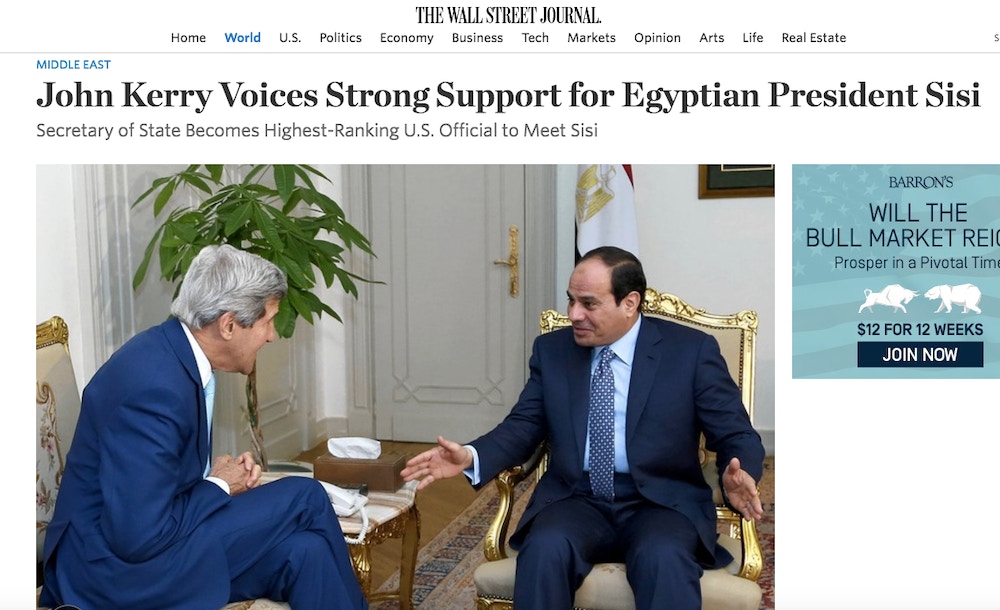 Obama himself — beyond sending him weapons and funds — has openly met with Sisi, as the top photograph of the two leaders in 2014 in New York shows. And during the same time, the Clintons met with him as well, producing this photograph: 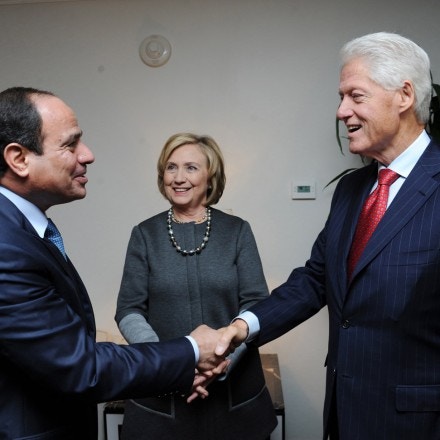 What Trump is achieving by opening the White House doors to Sisi is not ushering in a new policy but rather clarifying and illuminating a very old one. This Trumpian effect — unmasking in all its naked ugliness what D.C. mavens prefer to keep hidden — is visible in multiple other areas.

Exactly the same thing happened last week when Trump’s secretary of state, Rex Tillerson, announced that the U.S. would no longer condition transfers of arms to the regime in Bahrain on human rights improvements. The outrage over this announcement utterly masked the fact that Obama continued to lavish the same Bahraini regime with all sorts of weapons and other forms of support even as it imprisoned dissidents and violently crushed protests. Just compare the reaction of one Obama speechwriter to Tillerson’s announcement to the actual reality of his boss’s conduct: There are, of course, instances where Trump is imposing genuinely new destructive policies, such as his deportation crackdown, increased civilian massacres, and the rollback of vital regulations. But in the case of Egypt and Bahrain, the only new aspect of Trump’s conduct is that it’s more candid and revealing: rather than deceitfully feign concern for human rights while arming and propping up the world’s worst tyrants — as Obama and his predecessors did — Trump is dispensing with the pretense. The reason so many D.C. mavens like Diehl are so upset with Trump isn’t because they hate his policies but rather despise his inability and/or unwillingness to prettify what the U.S. does in the world.

One could argue that even the pretense of human rights concerns is preferable to dispensing with it altogether since that at least allows the potential for progress. But nobody who looks at Egypt or Bahrain — to say nothing of Saudi Arabia — could possibly argue with a straight face that the U.S. has succeeded in improving human rights in those countries by strengthening their tyrannies and arming their despots.

The real target of this rhetorical human rights pretense — this propaganda designed to prettify U.S. action — is not the oppressed people living under the thumb of those U.S.-supported dictators but rather Americans themselves. It’s all designed to allow U.S. citizens to believe the myth that their country stands for Freedom and Democracy in the world and shuns tyrants like Putin or the Iranian mullahs, even though propping up the planet’s most savage dictators has long been, and continues to be, central to U.S. policy. The beloved-in-Washington Henry Kissinger built his career on this mentality and is loved because of it, not despite it.

The destructive effect of this propaganda was perhaps never so visible as it was during the Arab Spring. U.S. media outlets covered the Tahrir Square demonstrations as though the U.S. were on the side of the heroic protesters while barely ever mentioning that the tyrant they were fighting was a close U.S. ally for decades. The tear gas canisters Mubarak used against those protesters literally bore “Made in the USA” logos. But the pretty rhetoric about Freedom and Democracy masked the ugly reality about what the U.S. government had actually been doing in Egypt and so many other countries around the world.

A key asset for U.S. imperialism is the ability of U.S. presidents to put a pretty, pleasant face on heinous actions. Recall the 2010 CIA memo explaining that the key to stopping anti-war sentiment in Europe — particularly growing opposition to the war in Afghanistan — was to exploit Obama’s popularity there to make the war seem prettier and more attractive to Europeans.

To see how the propaganda works, just look at this morning’s New York Times, which frets in its headline: “In a Shift, Trump Will Move Egypt’s Rights Record to the Sidelines.” Yet the same New York Times in 2015 made clear that while Obama officials were spouting pretty human rights rhetoric in public about Egypt, the Obama policy was also that Sisi’s human rights abuses would not stop U.S. support:

Trump’s support for Sisi, a true monster, deserves all the condemnation it gets. But anyone who depicts any of this as something new or aberrational for the U.S. — Krugman: “Another morning in Trump’s America” — is either ignorant or dishonest. Embracing the world’s worst tyrants is and has long been a key prong of U.S. foreign policy. Trump, through a combination of ineptitude and a willingness to openly endorse authoritarianism, just makes all of this less hidden, less deniable.

And that’s the reason so many in Washington — who never met a pro-U.S. dictator they weren’t willing to arm and fund — are so upset by all this. Sisi isn’t someone you invite over to your house for dinner; he’s someone you send money and weapons to in secret after you give your pretty speeches in front of American flags about human rights and freedom. What Trump is violating is not any Washington principles or ethics but Washington propaganda tactics.