Assad Suggests Chemical Attack Was “a Play” Staged by Al Qaeda and the U.S.

Since the start of the uprising against Assad’s rule, the Syrian government has claimed, without evidence, that all images of its own brutality are fake. Bashar al-Assad, the Syrian president, suggested in an interview broadcast on Thursday that social media evidence of a deadly chemical weapons attack on a rebel-held town in northern Syria last week was fake. The images that shocked the world, he said, were most likely of “a play,” staged by Islamist rebels affiliated with both Al Qaeda and the United States.

Speaking to the French news agency AFP in English, Assad first noted that the town of Khan Sheikhoun, where the mass poisoning took place, “is under the control of Al Nusra Front, which is a branch of Al Qaeda — so the only information the world has had till this moment is published by Al Qaeda.”

“No one has any other information,” he added, ignoring the first-hand accounts of the attack’s aftermath from two photographers working for AFP and civil defense workers who are not militants. “We don’t know if the whole pictures or video that we’ve been seeing are true, or fabricated,” the Syrian president insisted.

Assad also claimed that the air attack on the town carried out that day by his forces took place hours after the first images appeared on social networks of civilians suffering the effects of exposure to a nerve agent. A spokesman for the Russian ministry of defense first suggested last week that the Syrian raid on the town had come later in the day, but Major General Igor Konashenkov also claimed that the nerve agent was dispersed by a Syrian jet’s accidental strike on a rebel store of chemical weapons.

In Assad’s account, his forces played no role at all in the chemical exposure that reportedly killed more than 80 men, women, and children.

Asked directly what happened that day, the Syrian president then followed the lead of his Russian ally, President Vladimir Putin, by suggesting that the whole thing was most likely a “fabrication.”

“Our impression,” Assad replied, is “that the West, mainly the United States, is hand-in-glove with the terrorists. They fabricated the whole story in order to have a pretext for the attack.”

“It wasn’t attack because of what happened in Khan Sheikhoun,” Assad said of the American missile strike on a Syrian airbase, “it’s one event.”

“It’s a stage one — the play that we saw on the social networking and on TV, the propaganda — and the stage two — the military attack,” he added. “That’s what we believe is happening, because it’s only a few days, two days, 48 hours, between the play and the attack.”

Assad offered no evidence at all to support his theory, but that is not new.

Since the very first days of the uprising against Assad’s rule in 2011 — when peaceful protests were met with deadly violence — the outside world has been forced to rely to an unusual degree on information gleaned from the Facebook, Twitter, and YouTube accounts of opposition activists for any evidence of what was happening in Syria.

But that was largely the result of an intentional strategy by Assad’s government, which made it almost impossible for foreign correspondents to report freely from inside the country, and then contested the reliability of social media evidence from opposition activists it sought to tarnish as Islamic extremists.

Then, once Assad’s forces shattered the protest movement and gave momentum to an armed insurgency by actual Islamic extremists, the kidnapping and execution of journalists by the jihadists made reporting from the country very dangerous.

The resulting haze of uncertainty around many of the war’s events, and suspicion that Assad’s forces have also kidnapped foreign reporters, has dovetailed perfectly with his government’s strategy of claiming that all evidence of brutality by its forces is fake.

What makes it difficult at times to refute the Syrian government’s blanket denials and conspiracy theories is that there are very few truly non-partisan sources of information for outside observers to rely on.

To take the example of what’s known about the attack in Khan Sheikhoun, Assad’s claim that “the only information” indicating chemical weapons were used was “published by Al Qaeda,” is untrue, but most of the witnesses to the horrible aftermath do indeed want to see him deposed.

That includes one of the two AFP photographers who documented the suffering of the victims in heart-breaking detail. 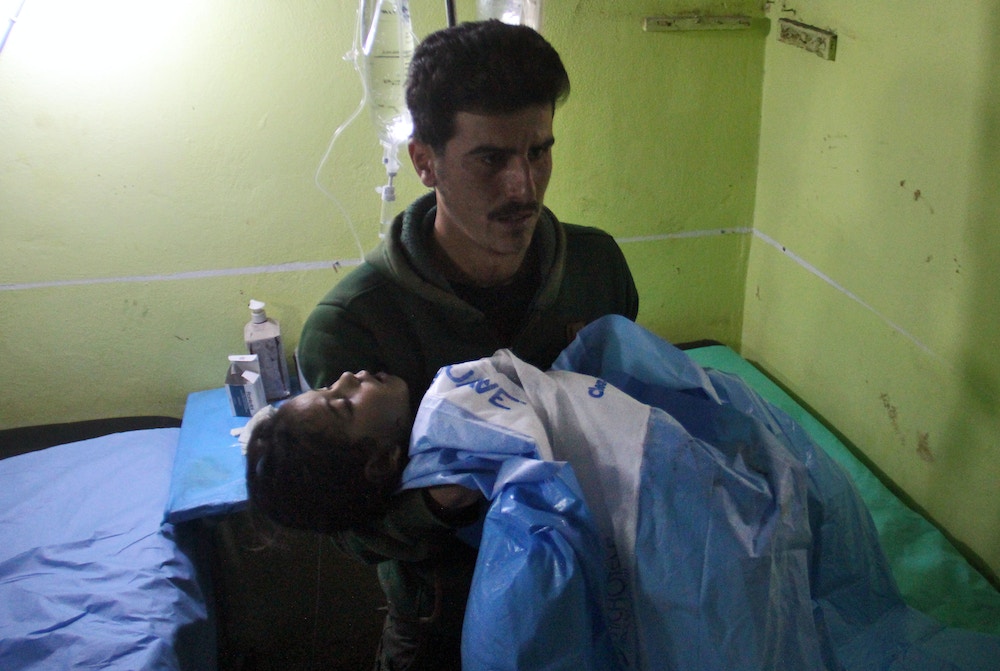 A father carried his daughter’s body from a hospital in Khan Sheikhun, Syria last week, after she was killed by exposure to a nerve agent following a government air strike.

Omar Haj-Kadour, who took devastating images of a father holding his dead daughter, has a reputation for accurate reporting, but he also identifies himself on Instagram as a “Media activist – Photographer,” and on Facebook as one of the “coordinators of the revolution in the city of Binnish.”

Five days after the attack, he posted a photograph on Twitter of protesters, including children, holding up signs and flags right beside what activists identified as the impact crater of the chemical-laden explosive dropped on Khan Sheikhoun.

Another key witness to last week’s attack in Khan Sheikhoun, a British doctor named Shajul Islam, is a volunteer medic in northern Syria, who left behind his career at the National Health Service to lend his support to anti-Assad rebels in 2012.

Do u still doubt that #Sarin is being used on us? Non-reactive pinpoint pupils! We have samples. Will anyone care!? Who will stop it?#Syria pic.twitter.com/WmhDZgLVA6

After Islam recorded video of the victims and spoke to NBC News on the day of the attack, his credibility was called into question by a Lebanese journalist, Jenan Moussa.

Moussa reminded her Twitter followers that the doctor was suspected on having played a role in the kidnapping of an English photojournalist, John Cantlie, in 2012, and was arrested and charged when he returned home to Britain that year.

I cant believe NBC interviewed this guy. Talk to Syrian doctors. This guy was involved in kidnapping 2 journalists https://t.co/UgDkYyrL3U https://t.co/1jypPijYf5

While the doctor was acquitted the following year, his trial was cut short because the main witness, Cantlie himself, had failed to show up to testify against him. It subsequently emerged that Cantlie was absent because he had returned to Syria to make a film about his captivity and was then kidnapped again, along with the American journalist James Foley.

While Islam maintains that he played no role in Cantlie’s first kidnapping, apart from treating him for a gunshot wound inflicted by his jihadist captors, the doctor’s history was seized upon after the attacks by Assad’s supporters, including the Russian embassy in London, who wanted to discredit his testimony.

That pretty much says it all – evidence on “Assad crimes” supplied by a committed jihadist (not even a doctor) pic.twitter.com/BfPyH3zd4z

Even though the doctor’s witness account appears genuine, and his assessment that a nerve agent was used was born out by subsequent testing, rumors about his past have made it easier for Assad supporters to dismiss his testimony out of hand.

In a brief interview with The Intercept, conducted online, the doctor confirmed that he “did treat John,” but shared a link to a video interview in which he denied any role in the kidnapping.

That interview was conducted by one of the few foreign journalists embedded with the rebels in northern Syria, Bilal Abdul Kareem, a former stand-up comedian from New York who converted to Islam.

As Abdul Kareem told the New York Times last month, he is not entirely non-partisan himself. As a Muslim, he sees his role as giving the various participants in the rebellion against Assad, including aid workers like the British doctor, and Islamist factions, including Al Qaeda, a way to explain themselves to Western audiences.

On the day of the attack in Khan Sheikhoun, Abdul Kareem produced a report on the effort to save those exposed to the nerve agent featuring the doctor’s own harrowing footage.