Jean Luc Mélenchon’s supporters argue: “To beat Trump it would have been necessary to support Sanders. Let’s not make the same mistake!” 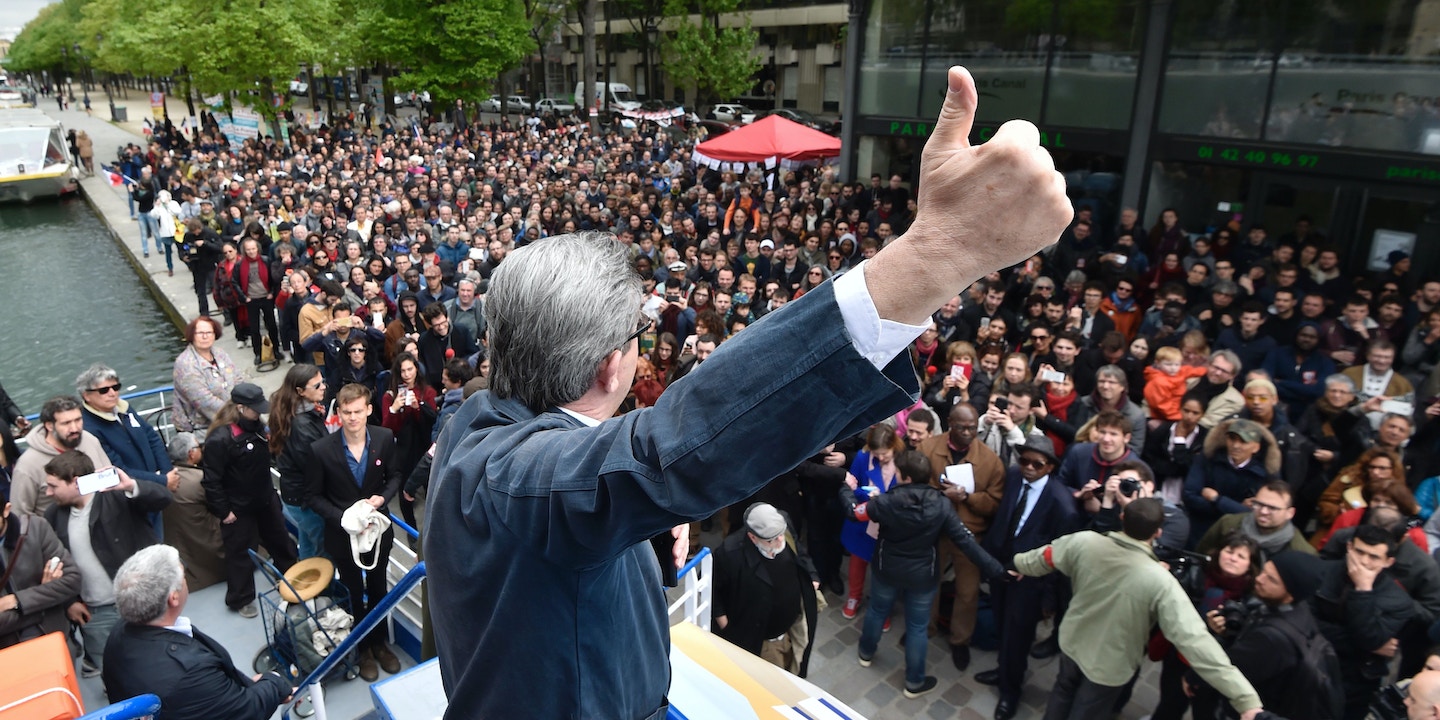 Jean-Luc Mélenchon, an insurgent left-wing candidate for France’s presidency, is surging. His candidacy, organized under the newly-established party La France Insoumise (“Unsubmissive France”) has gone from a quixotic bid to a viable challenge in just a few months.

Railing against growing economic inequality, participation in foreign wars, and political corruption, Mélenchon has skyrocketed in the polls from distant fourth to within a hair’s breadth of the frontrunners. (This rise has been accompanied by the release of a web-based video game called “Fiscal Kombat” where Mélenchon fights corrupt politicians and bankers.)

The Financial Times demonstrated his surge through an aggregation of French national opinion polls: Because no candidate is expected to get a majority of the vote, the national election on April 23 is, for all practical purposes, an elimination round. The top two vote-getters will then compete in a run-off on May 7. So in order to win the presidency, Mélenchon has to oust either centrist Emmanuel Macron or far-right Marine Le Pen, both of whom are running slightly ahead of him and conservative François Fillon.

Many have drawn comparisons between Mélenchon and Bernie Sanders. Raquel Garrido, a spokesperson for Mélenchon’s campaign, told Jacobin Magazine in early April that, like Sanders, Mélenchon is embracing a populist platform that seeks to speak to every portion of society, not just the traditional left.

“I think we are similar to Bernie Sanders in that way, who rarely spoke about ‘the Left,’ but about the people against the 1 percent or the billionaire class,” she said.

Mélenchon’s supporters have circulated a meme on social media comparing Le Pen to Trump and Macron to Clinton. “To beat Trump it would have been necessary to support Sanders,” it reads. “Let’s not make the same mistake!” But there is a major difference between Sanders and Mélenchon. The American chose to run within an existing political party, while the Frenchman seeks to compete against them. That’s why, unlike Sanders, Mélenchon is still in the running at this late stage, as the voters are souring on the candidates of the far-right and co-opted center.

Prior to announcing his bid for the White House, Sanders had to choose between running as an independent, as he did in his Senate races in Vermont, or within the Democratic Party. He openly struggled with that choice in an interview in March of 2014 with The Nation. “There is today more and more alienation from the Republican and Democratic parties than we have seen in the modern history of this country. … In that sense, running outside the two-party system can be a positive politically,” he noted.

“On the other hand,” he went on, “given the nature of the political system, given the nature of media in America, it would be much more difficult to get adequate coverage from the mainstream media running outside of the two-party system. It would certainly be very hard if not impossible to get into debates. It would require building an entire political infrastructure outside of the two-party system: to get on the ballot, to do all the things that would be required for a serious campaign.”

For those same reasons, when Sanders lost the Democratic presidential primary to Hillary Clinton, he chose not to keep running as an independent, even though he had long argued that he had a much better chance of beating Donald Trump than Clinton had.

If it was easier in the U.S. to run outside the two-party system, Sanders could more easily have run as a third-party candidate, and conceivably could have made an argument as election day approached that Clinton would have been the “spoiler” — the candidate draining votes from him, rather than the other way around.

Mélenchon is probably looking at the ruling Socialist Party candidate Benoît Hamon — polling at eight percent — and wondering if Hamon’s voters will prevent him from going to the second round of voting. Mélenchon was once a junior minister in the the Socialist Party, which is France’s version of the Democrats. But as the Socialists moved towards neoliberalism, he left the party and for a long time was in the political wilderness. When he announced last year that he would be challenging the mainstream parties in France’s presidential election, he was considered a non-factor.

Mélenchon is not only an advocate for left-wing policies like higher taxation, but also for remaking the French political system itself.

There are many ways countries elect their national parliaments, but they can be roughly grouped into two categories. There’s the system that the United States, Canada, the United Kingdom, and a few other countries use, which is based on apportioning seats by single-member constituencies. Each district is winner-takes-all, so theoretically one party could win 51 percent of the vote in every district, and 100 percent of the parliament. That creates a powerful inducement for gerrymandering — and it also makes it particularly hard for new parties to get a toehold. In practice, this leads to domination of the political system by just a few parties, with voters typically cluster into two parties, both vying to top the other one.

The alternative is called proportional representation (PR). Under a PR system, the electorate casts its votes nationwide for whatever political party they choose, and then seats are distributed by percentage. You don’t have to win the majority of votes in any one geographically-bound district to enter the parliament. This allows for the rapid growth of minority parties, and more political diversity. So, for instance, in PR-using Israel, there are 10 political parties in the Knesset. PR-using Sweden has eight parties represented.

Justin Trudeau, Canada’s Liberal Prime Minister, won election in 2015 with a promise to shift Canada towards a proportional system (a promise he soon turned his back on). Canada’s The Globe & Mail made a video explaining how PR would work:

France, unlike most other countries in Europe, elects it parliament from geographical districts, like the U.S. and U.K. This leads to gerrymandering and a stunted political system where it is very difficult to form new political parties.

So for instance, in the 2012 French legislative elections, the radical Left Front got 23 percent of the national popular vote, but just 2 percent of the seats in the Assembly.

Mélenchon wants to change that.

He is calling for a constitutional convention and a transition to a full proportional representation system (both Le Pen and Hamon have voiced support for shifting to PR as well). France is currently in its “Fifth Republic,” a form of constitutional system established in 1958; Mélenchon wants to establish the “Sixth Republic,” by shifting to proportional representation and making other changes to the government’s structure.

Bernie Sanders spoke of a “political revolution,” but made his project moving the Democratic Party in a more populist direction. Mélenchon, on the other hand, believes that the big changes necessary in French society can only come by displacing the current political parties.

Speaking of the state of the current political parties in France to Jacobin, Mélenchon spokesperson Garrido was blunt. “They will die together with the Fifth Republic,” she said. “They are organized to hold power within the Fifth Republic. There will be a new political terrain. The idea is not to recompose or repair the damaged parties of the Fifth Republic, but to allow new instruments to organize.”

What would an American version of Mélenchon’s plan for French democracy look like?

It’s impossible to know exactly what would result from, for instance, converting the U.S. Congress into a proportional system. But we do know that the current system is far from popular, while also very hard to dislodge. In 2016, members of the U.S. House had a 97 percent re-election rate; and yet the latest Gallup poll puts Congress’s approval rating at 24 percent.

A shift like the one Mélenchon is proposing in France would also require Constitutional changes, which are very difficult to implement. But the same could be said for many of the ideas Sanders ran on, like a Constitutional amendment to overturn Citizens United.

Both Mélenchon and Sanders understand that the ideas circulated in political discussion should not be limited to what can be immediately implemented — and that introducing and advocating for radical ideas is one way to move the center of political gravity. After all, there was a time when being a democratic socialist, like Sanders is, would banish you from national politics. Today, he is the most popular serving politician in America.

And big changes often come where you least expect them. Just ask the people of Maine. The sleepy state, not known for its radicalism, was the first in America to adopt a ranked-choice voting system after a referendum in November 2016. Under this system, voters will now be able to rank their preferences among various candidates and parties, rather than simply casting one vote for each office. If no candidate receives a majority of first-preference votes, then second-preferences are accounted for, and so on, until one candidate has a majority. It’s not a proportional system, but it’s a step towards empowering minority parties and breaking up the traditional two-party monopoly.

Perhaps America is growing a little unsubmissive as well.