The sweetheart deal could privatize thousands of facilities and management jobs at colleges, prisons, and other public buildings. 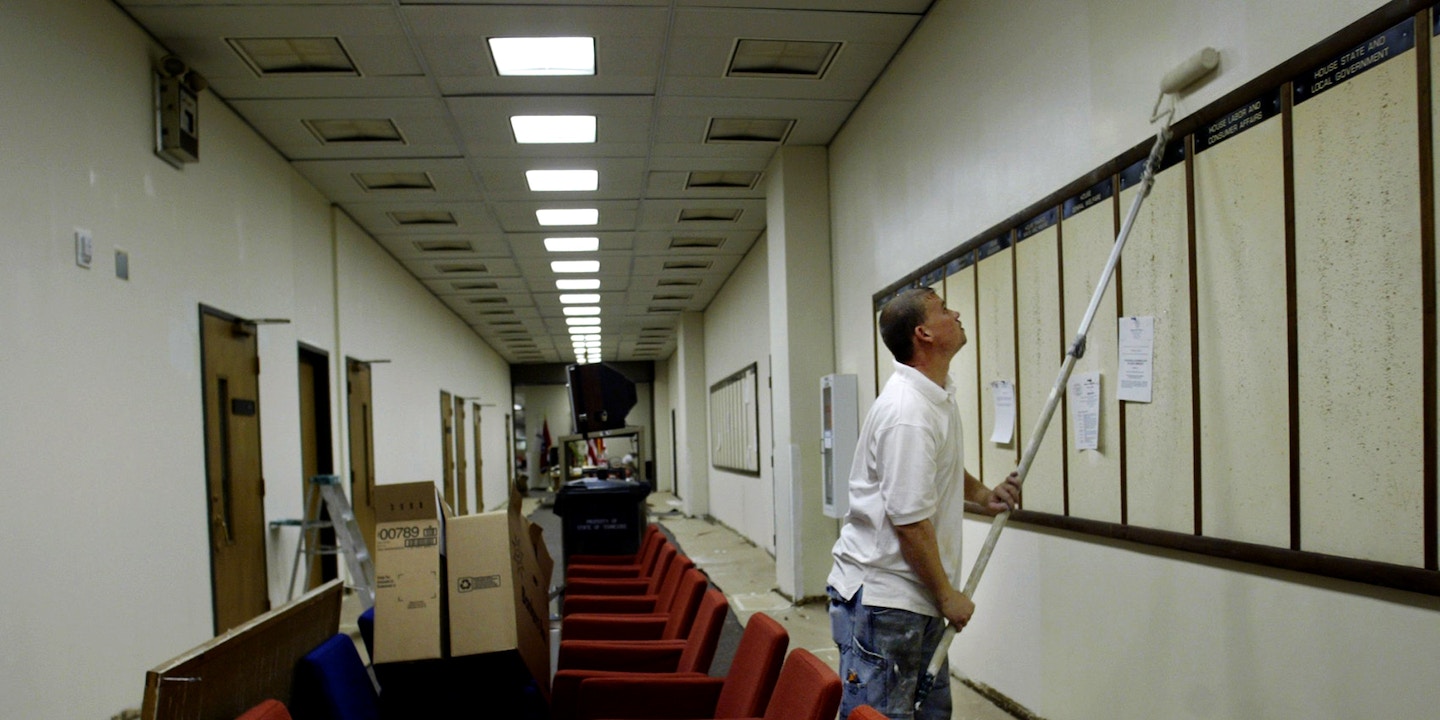 Tennessee’s state government has inked a sweetheart deal with a company linked to the state’s billionaire governor to privatize thousands of facilities and management jobs at colleges, prisons, and other public buildings.

It’s being touted by some officials in other states as a model for the nation.

The $330 million, five-year contract covers custodial services, groundskeeping, and repair and maintenance work. Government officials say that each public facility can choose to only partially comply, or opt out, keeping their employees on the public payroll. “If they’re happy with business as usual, there’s nothing to do,” said Michelle Martin, a spokeswoman for the office that issued the contract.

But Gov. Bill Haslam has been adamant about the need to outsource state jobs. And any facility considering outsourcing will no longer be able to seek quotes from a variety of bidders. Their only choice, according to a master contract signed last Friday, will be to hire Jones Lang LaSalle (JLL), the world’s largest facilities management firm. Under a process called “vested outsourcing,” JLL actually helped write the contract.

The United Campus Workers union (UCW) estimates that 10,000 workers could be affected, from janitors and electricians to middle-management accountants and clerical staff. At newly-outsourced facilities, state workers would have to re-apply for jobs and face additional screening. While Tennessee has promised that workers’ total benefits would not be reduced, the union is skeptical. “It creates a volatile and unpredictable environment,” said Thomas Walker, communications director for UCW. “It’s kind of this private sector business philosophy that they are using Tennessee to experiment on.”

“Governor Haslam’s secretive outsourcing plan has all the hallmarks of a corporate takeover of government,” said Donald Cohen of In The Public Interest, an anti-privatization group. “Government is too important to be used as a marketing tool for corporations that want control of public services.”

The outsourcing drive started several years ago. Haslam, the richest U.S. elected official not named Donald Trump, began in 2013 by privatizing facilities management in 10 percent of the state’s 7,500 buildings, including Legislative Plaza in Nashville, to JLL. The state claims $26 million in savings from that initiative between 2014 and 2016. But Walker said that cost breakdowns have never been provided to the state comptroller. He added that service quality “instantly collapsed” at the state capitol. “People talk about the flickering light bulb in their office,” he said. JLL has received critical reviews in audits of its facilities management in Tennessee, though spokeswoman Michelle Martin cited 98 percent internal satisfaction ratings for JLL services.

The choice of JLL was notable because Haslam disclosed while running for governor that he had a major investment in the company. The governor put the JLL investment into a blind trust upon entering office.

JLL also receives significant contracts from the state for consulting. It has advised the state on decommissioning state buildings and leasing new office space (including its own facilities), earning at least $3.7 million. Another $1 million consulting contract went to studying facilities management at all state buildings — precisely the activity JLL now means to take over. One state audit cited this conflict of interest as problematic.

An August 2015 “request for information” laid out the latest outsourcing expansion, encompassing virtually every job at a state-run facility. State representatives and private companies, including JLL, developed the scope of the final contract in confidential meetings.

“It’s a significant change in how procurement operates,” said Melanie Barron of UCW. “Normally, the state would say ‘This is what we need, you come and bid on it.’ Companies are now helping tell the state what they need.”

This new “vested outsourcing” concept was championed by two adjunct professors at the University of Tennessee-Knoxville’s business school, one of whom, industry consultant Mike Ledyard, now works as the “director of facilities management outsourcing” for the state’s uniquely named Office of Customer Focused Government. Consultants specializing in outsourcing have been paid $612,000 a year by the state of Tennessee. Ledyard is the highest-paid employee in Tennessee government.

State officials maintain the procurement process they used dates back to the 1950s, and described vested outsourcing as merely workshops for the state to learn industry best practices.

In a survey of five campuses, JLL estimated that it could save Tennessee between 12 and 19 percent for four of them (the fifth, the Tennessee School for the Blind, would have cost the state more money). But the company provided no detailed analysis of how those numbers were derived. Democratic state legislator Lee Harris called the numbers “made up” and “arbitrary.”

Technically, the savings aren’t supposed to come at a cost to workers. The state, which claims that only 3,000 workers would be impacted as opposed to 10,000, stressed that “the welfare of current facilities management employees” was the top priority of the contract. The contract also promises no reduction to an employee’s “Total Equitable Compensation,” which includes salary, health insurance, retirement benefits, and education assistance.

However, the request for proposal says that “no current qualified and productive facilities management employees will be unemployed” as a result of outsourcing. That seemingly subjective standard gets applied through background checks, skills verifications, and drug testing, something not currently asked of state workers. Other potential loopholes distinguish between “regular” and “non-regular” employees, and allow JLL to transfer workers up to 50 miles away from their existing employment locations.

“What we anticipate is for there to be reduction in state payroll,” said Melanie Barron of UCW. In addition, Barron said, attrition since the outsourcing process began two years ago has already led to lower staffing levels, which are being used as a baseline for the new employer. “They’ll intentionally understaff,” she said.

And new workers will not be treated the same as older ones. Tom Anderson, a warehouse buyer at the University of Tennessee-Knoxville, and a past president of UCW, explained that when food services on college campuses were outsourced to private employer Aramark several years ago, it created a “hostile two-tiered work environment,” with the holdover workers getting higher pay for the same jobs as the new ones. “The ground-level managers have a financial incentive to get people off the books,” Anderson said. “There are many tactics to get people to leave.”

UCW cites other “absurdly favorable” terms in the JLL contract. For example, the state assumes the cost of sales tax on any goods and services provided by or procured by JLL. The contract can also be expanded to cover county or municipal government, including K-12 schools, and can be rewritten at any time if expenses exceed the approved budget, according to UCW.

The state asserts that savings would arise from economies of scale, like bulk purchasing for supplies and materials and by removing the need for sub-contractors. “If more sign up you’re spreading fixed costs more, bringing costs down,” said state spokeswoman Martin.

Critics argue the state has put their thumb on the scale to encourage sign-on, particularly at college campuses, which comprise close to two-thirds of all state facilities. Under legislation passed last year, Governor Haslam created new governing boards for four-year colleges like the University of Memphis, East Tennessee State, and Middle Tennessee State. Haslam “appointed every single person on the board,” said Walker, the union spokesman.

Separately, Haslam has put pressure on colleges to justify their budgets, while cutting state support to the university system by hundreds of millions of dollars. Terry Cowles, head of the Office of Customer Focused Government, reportedly told campus officials in March that they needed to decide whether to opt in to outsourcing by May 1, though the state later denied that.

University of Tennessee facilities managers have called Haslam’s plan a “disaster.” State workers have protested with banner drops and demonstrations, using the hashtag #TNisNOTforsale. Students and faculty appear to oppose the idea as well. A public comment period generated thousands of statements of opposition. “We don’t get complaints, we get compliments,” said Tom Anderson, the facilities worker at UT-Knoxville. “We have universal support from faculty and student groups.”

Even the heavily Republican state legislature has expressed concern about the lack of oversight of the JLL contract. Forty-two state lawmakers recently asked the Office of Customer Focused Government to halt the outsourcing until the legislature could study the implications. Seventeen elected officials called for an economic impact statement on areas affected, but have yet to receive a response from the state. Two bills to increase legislative oversight have been introduced, but the governor announced his opposition to them for “philosophical reasons.”

On a campus tour last week, Cowles got an earful from students about the lack of transparency and Haslam’s ties to JLL. “We’re trying to be as transparent as we can,” Cowles told students, while admitting that the state hasn’t spoken to any campus workers in particular about the contract.

But Cowles has been speaking to other states about adopting the outsourcing concept. “Last count, there’s about 15 of them that are really interested in seeing what’s transpiring here,” he told students. The National Association of State Chief Administrators, a non-profit association of state officials, is holding a May 3 symposium in Nashville on the Tennessee outsourcing plan. The state is providing speakers for the event, according to David Roberson of the Department of General Services.

One of the event sponsors is JLL.