North Korea Wants to Convince the World It Can Nuke Hawaii. Donald Trump Is Happy to Oblige.

The Trump administration’s rhetoric suggests North Korea is on the verge of striking the U.S. In fact, its long-range missile tests keep failing. U.S. officials have repeatedly (and falsely) claimed that North Korea is on the verge of having the capability to carry out a nuclear strike on U.S. soil. And the Trump White House has done little to tamp down media speculation about nuclear war, perhaps because the hype plays to its advantage.

In fact, President Trump’s rhetorical brinksmanship has some resemblance to the governing style of Kim Jong-un, the North Korean dictator whom Trump recently called “a pretty smart cookie.” A population that feels threatened by mass violence tends to line up behind its protector. Exaggerated beliefs about North Korea’s nuclear capabilities serve to justify America’s own provocations. These include Foal Eagle, a military exercise carried out on North Korea’s doorstep by U.S. and South Korean forces every spring since 2002.

The North Korean missile that’s drawn the most speculation is called the KN-08. It has only been tested twice. Both tests ended in failure. Nevertheless, NBC has offered advice on what Americans should do in case of a nuclear strike. Fox News reported on Hawaii’s “emergency attack plans.” Trump himself tweeted that North Korea is in the “final stages” of developing a nuclear weapon that could hit the United States. Adm. Harry B. Harris Jr., the head of Pacific Command, told Congress last week that “Kim Jong-un is clearly in a position to threaten Hawaii today.” Those who watched the full hearing know that Harris also said that current missile defense systems are “sufficient.” But you wouldn’t know it from the headlines:

There is a problem with this scenario. The North Korean missiles that are theoretically capable of reaching Hawaii do not work. Nor do many other key components of the country’s arsenal. Last Friday, two days after Harris’s warning, North Korea tried to launch a medium-range ballistic missile. It was not mounted with a nuclear warhead — it’s unclear whether North Korea is actually capable of mounting a working nuclear bomb onto a working missile. The missile flew 22 miles, never leaving North Korean airspace, before exploding into harmless pieces. An earlier April test failed just after liftoff. North Korea’s last halfway successful test, in March, got four medium-range Scud missiles to the Sea of Japan, but “no new capabilities were demonstrated,” according to one expert analyst. A fourth test of a single Scud missile, in early April, “spun out of control after going only a fraction of its range,” according to an anonymous official quoted by Reuters.

“North Korea’s launch-failure rate has been extraordinary high” since the Obama administration stepped up cyberwar efforts in 2014, the New York Times noted. Trump has dodged the question of whether a secret U.S. cyber campaign against North Korea might be responsible for the latest test failures, though he has claimed that Obama was “outplayed” in his dealings with Pyongyang.

Trump’s attempts to stoke U.S. fears about North Korea’s nuclear capabilities began during the transition, with this tweet:

Propaganda from the North Korean government is far more aggressive, promising the destruction of U.S. cities:

The North Koreans want to sell the world on the idea that they’re a serious threat. Not six months or six years from now, but today. The U.S. media has been eager to take this end-of-the-world meme one step further, drawing comparisons to the Cuban missile crisis and suggesting that the face-off between Trump and Kim has the world teetering on the brink of apocalypse. This terrifying narrative certainly drives traffic: But there is little evidence to suggest it is true.

This week, with the threat of war firmly established, Trump backed off. He even suggested that he might meet with Kim. “I would be honored,” he told Bloomberg on Monday. “I’m telling you under the right circumstances I would meet with him. We have breaking news.”

War on Monday, peace on Tuesday, with the news cycle dominated by the president’s ever-shifting whims.

On Korea, Trump’s manipulation of the media serves to conceal how little difference there is between his policy and the so-called “failed policies” of his predecessors. Underneath his tough talk, Trump’s approach appears identical to Obama’s — use sanctions and diplomatic pressure to prod North Korea to the negotiating table, even as a covert cyber campaign undermines Pyongyang’s capabilities. “There’s been a lot of bluster and declarations, giving the appearance that we have a new sheriff in town,” Prof. Richard Samuels, who directs MIT’s Center for International Studies, told me. “In fact, it looks like the old policy of strategic patience may still be in place.”

We’ve been here before. Consider this statement: “North Korean technicians are reportedly in the final stages of fueling a long-range ballistic missile that some experts estimate can deliver a deadly payload to the United States.” This was the first sentence of a Washington Post op-ed written by William Perry and Ashton Carter, two former secretaries of defense. Their words echoed Trump’s tweet: The final stages.

But that op-ed was published more than 10 years ago, in 2006. Perry and Carter were writing about a missile called the Taepodong. Today, North Korea experts are still speculating about the possibility that the Taepodong could be deployed in an emergency, although they caution that “such a weapon would represent more of a political statement than an operational capability since it would suffer from significant problems.” Compare that to what Perry and Carter wrote for popular consumption in 2006, and one might be persuaded that North Korea’s nuclear program is running backward.

Of course, it is true that North Korea could kill hundreds of thousands of people in Tokyo and Seoul with short-range missiles and artillery. That has always been the case, going back decades. And another North Korean missile, the Musudan, was successfully tested last year after five consecutive failures. The Musudan flew 250 miles, but the sharp launch angle suggests the potential for greater range. Kim’s regime has successfully tested land-based nuclear bombs and has rapidly accelerated the rate of ballistic missile tests. Whether or not he could succeed in detonating a missile-mounted nuclear warhead over Japan or South Korea is unknown; the possibility is too catastrophic to be ignored.

These facts aren’t enough for Trump. Having won the presidency as an America-first isolationist who denigrated U.S. alliances and misrepresented his own position on the Iraq War, the prospect of Seoul and Tokyo in flames was insufficient. He had to put Honolulu and Seattle into play as well.

Another example of symbiosis between Trump’s vague warnings and the media’s hair-trigger alarmism took place over the weekend, when CNN published this map, misrepresenting a possible future threat as a clear and present danger: 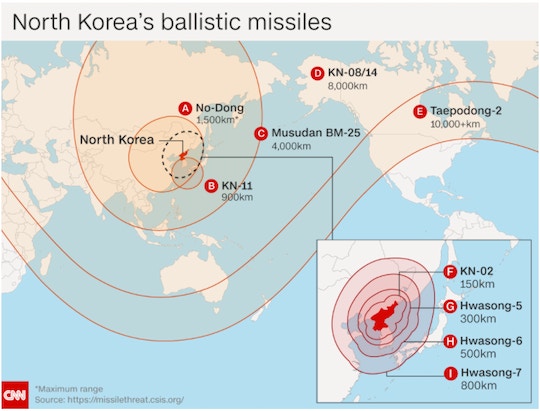 The New York Times was slightly more restrained. They used a dotted line and qualified the threat as “potential.” Last week, I spoke with a congressional staff member who has drilled down into what we actually know about the KN-08 and a variant, the KN-14. “What’s the timeline?” said the staff member, who asked not to be identified when discussing intelligence matters. “That’s the million-dollar question. Is it 2020? Is it earlier? Among the intelligence community, there are differing estimates. Some folks think it’s a question of months. Others say it’s a three- or four-year time frame. The big thing that’s missing in the debate is that North Korea has never successfully tested an ICBM [long-range ballistic missile]. The question is what we can do to stop that from happening. A lot of folks don’t think pre-emptive strikes are the way.”

It’s the intelligence community’s job to be pessimistic. The more that the CIA and NSA know about the KN-08, the KN-14, and other low-probability threats, the easier it will be for the U.S. to protect the Korean peninsula without going to war. But there’s a difference between making hard-nosed threat assessments and inflating them to drum up the prestige of an insecure leader. That’s not the art of the deal. That’s the art of dictatorship.