How Much Does a Politician Cost? A Groundbreaking Study Reveals the Influence of Money in Politics.

Many academics claim, against all odds, that money doesn’t matter in politics. Now we can see exactly what it costs to buy a congressional vote. 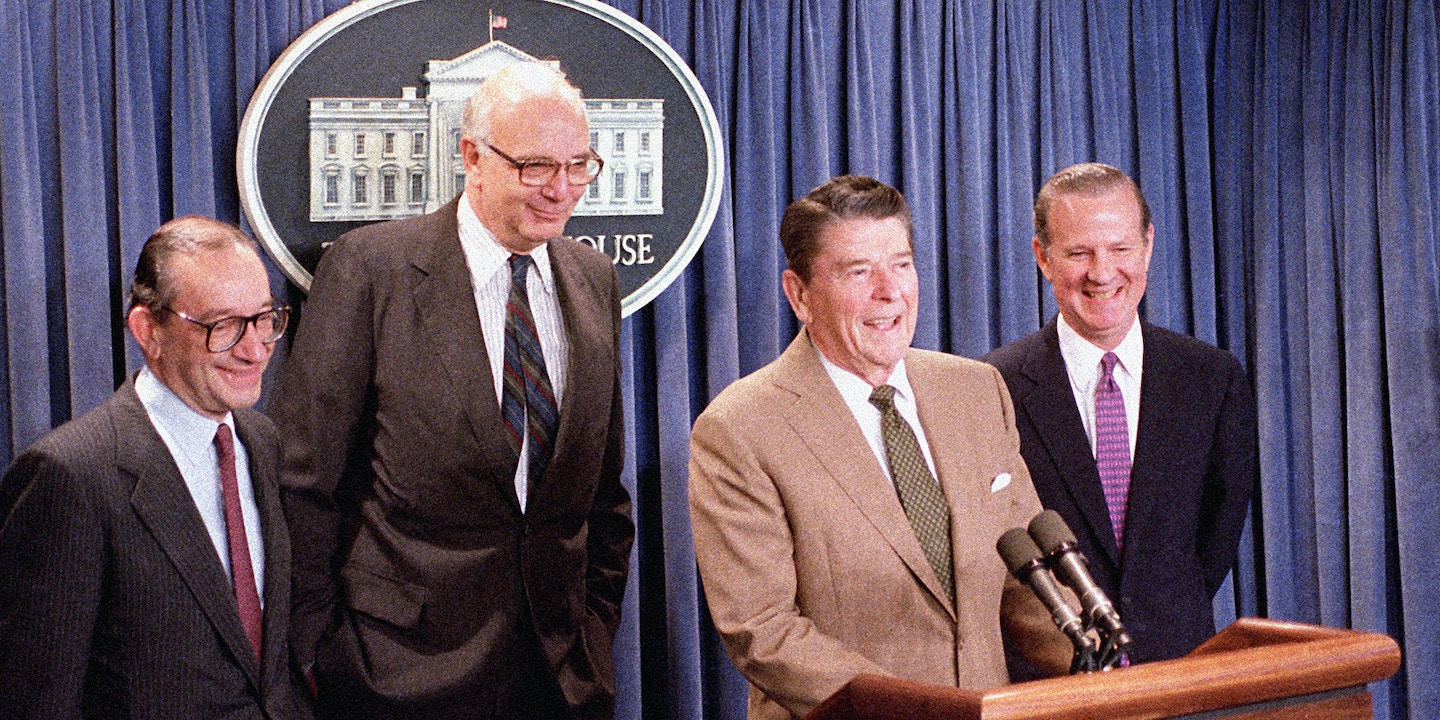 An ingenious new Roosevelt Institute study on the influence of money on politics begins with an incredible story about how the world actually works:

In the spring of 1987, Paul Volcker’s second term as chair of the Federal Reserve was running out. Volcker had first been appointed by Jimmy Carter in 1979, and was willing to stay for another four years if President Reagan asked. While Volcker had used high interest rates to engineer a crushing recession at the start of Reagan’s first term, he then allowed the economy to expand rapidly just in time to carry Reagan to a landslide reelection in 1984.

Yet Reagan wanted to replace him. Why?

The study’s authors, Thomas Ferguson, Paul Jorgensen, and Jie Chen, report that they learned the answer from a participant in the key White House meeting on Volcker’s fate.

The main opposition to reappointing Volcker came from Reagan’s treasury secretary James Baker. As the study puts it, Baker did not like Volcker’s “skepticism about financial deregulation,” specifically his opposition to attempts to repeal the Glass-Steagall Act.

Glass-Steagall, passed at the beginning of Franklin D. Roosevelt’s presidency in the depths of the Great Depression, separated commercial and investment banking. Allowing banks to combine the two activities had created enormous conflicts of interests and incentivized manic recklessness that helped cause 1929’s financial Armageddon.

But banks had loathed Glass-Steagall ever since, because the fewer economy-destroying risks they could take, the lower their profits. By 1987 they were making progress in their long war to push Congress to repeal it. And while Fed chairs of course can’t vote themselves, many politicians take their cues from them on complex financial issues.

According to the Roosevelt study, that was why Volcker had to go:

Baker’s [explanation for why Volcker should not be reappointed] was startlingly direct: Possible repeal of Glass-Steagall was the signature issue used by investment bankers, led by then-Goldman Sachs executive Robert Rubin, to raise money for the Democratic Party from their cohorts on Wall Street. Getting rid of Glass-Steagall, Baker explained, would alter the balance of power between the two major parties by depriving the Democrats of a central revenue stream.

So Volcker was replaced by Alan Greenspan, who gleefully supported the elimination of Glass-Steagall in 1999 — as did Robert Rubin, who became treasury secretary under Bill Clinton. Coincidentally or not, within a decade Wall Street had inflated the biggest bubble in world history in an attempt at mass suicide, saved only by trillions of dollars of government support. They were too big to fail, while millions of regular Americans turned out to be just the right size to fail.

As horrifying as this tale is, few normal people would be surprised by any of it. A 2015 New York Times poll found that 87 percent of Americans believe the campaign finance system either needs “fundamental changes” or should be “completely rebuilt.” Politicians themselves will tell you that their world is ruled by money. And the super-wealthy obviously believe money translates into power, since they continue pouring it into politics.

Strangely, almost the only human beings who think that money doesn’t warp politics are academic political scientists who study it. The Roosevelt study quotes a previous paper summarizing the “scholarly consensus” as being that “candidate spending has very modest to negligible causal effects on candidate vote shares.”

The Roosevelt authors go to extraordinary lengths to demonstrate to their colleagues that the sky is, in fact, blue. The study uses all the tools of academic scholarship in impressively creative ways, and will convince anyone who can be convinced by rationality and evidence.

First of all, the study explains, “exceptions, additions, and loopholes have proliferated around the rules governing legal contributions and expenditures. Congress has many times enacted rules that appeared to close off gushing torrents of money while in fact opening new ones.” The system is now “worthy of Gogol: a maze of bureaucratic spending and expenditures” that are exceedingly difficult to track.

The Roosevelt authors went to the effort of capturing as much of it as possible — and found that academic examinations of this subject miss as much as 50 percent of the money being spent on elections.

It’s also tough to legitimately measure how money could translate into congressional votes. Legislation often is thwarted by small numbers of politicians in committees, too few to create a good data set. In the Senate, few votes are ever taken, with most of the action going on beneath the surface. And there’s a continuous churn of elected officials, making it hard to find an inflection point in the decisions of any one individual.

The Roosevelt study therefore focuses on an issue where politicians were repeatedly forced to go on the record — House votes on the Dodd-Frank financial reform bill — and Democratic representatives who were representing the same district over several terms and would seemingly have little reason to change their minds.

Dodd-Frank was passed in 2010. After the GOP took control of the House in the midterm elections that year, representatives voted five times from 2013 to 2015 to weaken key provisions of the law in ways that big banks desperately desired.

There would be no discernible legitimate reason for Democratic representatives who’d supported Dodd-Frank to begin with to later defect from their party and vote along with Wall Street. Many did, however.

Why? Well, no one can say what was in their hearts, at least until we hear from someone like James Baker. But what the Roosevelt study demonstrates is that “for every $100,000 that Democratic representatives received from finance, the odds they would break with their party’s majority support for the Dodd-Frank legislation increased by 13.9 percent. Democratic representatives who voted in favor of finance often received $200,000-$300,000 from that sector, which raised the odds of switching by 25-40 percent.”

Intriguingly, Democratic representatives leaving the House after the 2014 elections were particularly likely to support Wall Street against Dodd-Frank. In an interview, Ferguson characterized their votes as “applications for employment.”

For most people, the Roosevelt study — which is genuinely fascinating and, unusually for an academic paper, worth reading just for the quality of its writing — will confirm what they already sensed. Ferguson said he hopes it will also help “end the discussion” in academia on whether money matters in politics.

But while it should do that in a rational world, this is likely over-optimistic. Consider the fact that, no matter what the real world evidence has shown, academic economists continue pumping out studies about the desperate importance of cutting the taxes of billionaires. H.L. Menken explained that phenomenon almost 100 years ago:

To what extent is political economy, as professors expound and practice it, a free science, in the sense that mathematics and physiology are free sciences?

… When one comes to the faculty of political economy one finds that freedom as plainly conditioned, though perhaps not as openly, as in the faculty of theology. And for a plain reason. Political economy, so to speak, hits the employers of the professors where they live. It deals, not with ideas that affect those employers only occasionally or only indirectly or only as ideas, but with ideas that have an imminent and continuous influence upon their personal welfare and security, and that affect profoundly the very foundations of that social and economic structure upon which their whole existence is based. It is, in brief, the science of the ways and means whereby they have come to such estate, and maintain themselves in such estate, that they are able to hire and boss professors.

Likewise, those who hire and boss professors of political science love to hear that money makes no difference in politics. And no matter how hard academics like Ferguson, Jorgensen, and Chen work, and how much real world evidence they pile up, many other professors will likely continue making that case indefinitely.

Top photo: President Ronald Reagan announces the appointment of Alan Greenspan, left, as his choice to replace Paul Volcker, center, as chairman of the Federal Reserve Board at a White House briefing, accompanied by Secretary of Treasury, right, James A. Baker III, on June 2, 1987.