There Are No “Macron Leaks” in France. Politically Motivated Hacking Is Not Whistleblowing.

A disinformation campaign aimed at boosting Marine Le Pen by spreading rumors about her rival, Emmanuel Macron, appears to have started in the United States. 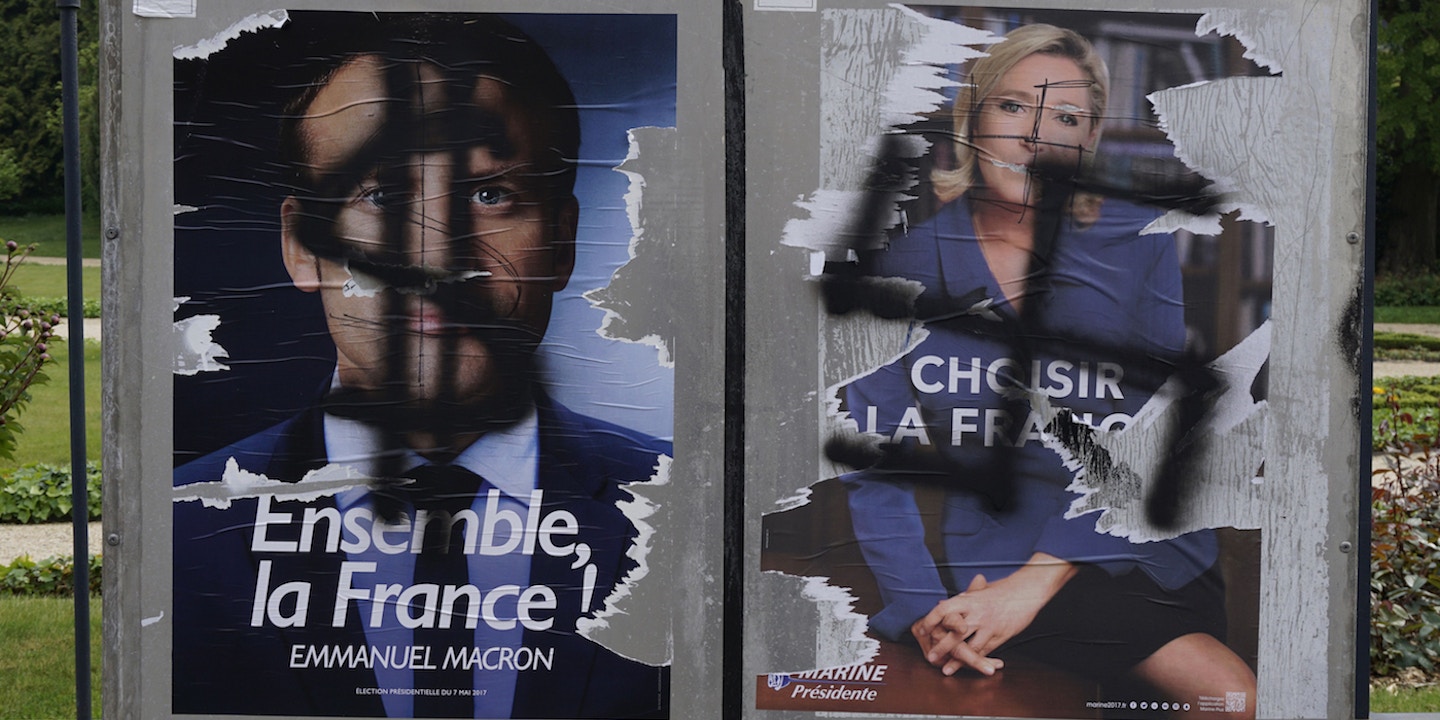 Here’s some news for the alt-right activists in the United States behind a disinformation campaign aimed at getting Marine Le Pen elected president of France by spreading rumors about her opponent, Emmanuel Macron: The French do not much like having their intelligence insulted by Americans.

Funniest part of #MacronLeaks is the US alt-right, who can't read French, spending time on misinterpreting mundane documents.

That theme was repeated again and again in France on Saturday, in response to reports that a trove of hacked documents — nine gigabytes of memos and emails stolen from Macron aides and posted online Friday night, just before a legally imposed blackout on statements from candidates took effect — was first publicized on social networks by pro-Trump propagandists.

According to Nicolas Vanderbiest, a Belgian academic who studies social networks, the hacked documents only began to attract attention after they were linked to on Twitter by Jack Posobiec, a Trump supporter who added the misleading hashtag, #MacronLeaks.

That tag, which falsely suggested that the hacked documents had been leaked by a public-spirited whistleblower, rather than stolen by Macron’s political opponents, and contained evidence of wrongdoing, instead of what appears to be mainly a collection of mundane campaign memos, was soon used by a more influential account, WikiLeaks.

#MacronLeaks: A significant leak. It is not economically feasible to fabricate the whole. We are now checking parts. https://t.co/wLemQiYHT2

As Vanderbiest demonstrated in graphics that chart how awareness of the hacked documents spread across Twitter, a series of tweets from WikiLeaks drew much more attention to the trove — and helped validate it in the minds of many followers of the transparency organization, some of whom wrongly assumed that WikiLeaks was the original source for publishing the documents.

Even as WikiLeaks helped spread news of the hack, the group’s French lawyer, Juan Branco, wrote that the “MacronLeaks” dump “disgusts me.”

“What are we playing at?” asked Branco, who is running for a seat in Parliament next month as a candidate of Jean-Luc Mélenchon’s France Insoumise party.

Instead of important revelations, an initial review of the documents circulating under the MacronLeaks tag by Julien Cadot, a journalist for the site Numerama, suggested that they “seem to be utterly banal.”

“There are briefing notes, bills, loans for amounts that are not excessive,” Cadot explained, along with “strictly personal and private exchanges — personal notes on rain and good weather, a confirmation email on the publication of a novel, the reservation of a table between friends.”

The point of the dump, then, appears to be less about providing real evidence to back up the rumors and innuendo Marine Le Pen’s supporters have been spreading about Macron for months, and more a way to reinforce the fact-free speculation the candidate herself engaged in during a televised debate this week — that her rival, a former investment banker, might be hiding something that would discredit him, like an offshore account.

That was certainly the message Le Pen’s influential deputy, Florian Philippot, attempted to drive home on Twitter, where he asked rhetorically, “Will #Macronleaks teach us something that investigative journalism has deliberately silenced?”

That seemed unlikely, however, given the timing of the release — which came just before French media outlets were forced to observe a ban on reporting for the campaign’s final weekend, meaning that any revelations of real significance would not be broadcast outside the echo chambers of social networks and non-French outlets.

According to initial reviews of the documents, the hacked documents also seem to have been stolen nearly two weeks ago. The decision not to release them until it was too late for journalists to dig through them for dirt on Macron strongly suggests that the hackers, at least, had not come across anything incriminating.

Not that the lack of evidence stopped alt-right activists like Posobiec — who previously played a central role in pushing the viral conspiracy theory that Hilary Clinton’s aides were using the code word “pizza” in emails to refer to child sex slaves — from trying to claim that the hacked documents were damaging to Macron.

5% of #MacronGate users account for 40% of tweets. The most prolific tweeted 1668X/24 hrs?faster than one RT per min, all day with no sleep.

As Alberto Nardelli of BuzzFeed noted, Posobiec even falsely claimed that a mundane document showing that Macron’s campaign had taken out financial insurance was a suspiciously “huge new life insurance policy” taken out by the candidate.

While Macron’s campaign confirmed that some of the documents were genuine, they claimed that the trove also contained forgeries. Among the hacked documents examined by security researchers, some did appear to be obvious fakes — like one receipt for illegal drugs, supposedly ordered by an elderly French politician who used Bitcoin to make his purchase and asked for the drugs to shipped to him under his own name at his parliamentary office.

Bad fakes mixed in too: an old French politician using bitcoin to have drugs shipped to the parliament building? lol (HT @IEPgrenoble) pic.twitter.com/VbwjjsBFG0

Other researchers reported that the metadata of some documents revealed that they had been edited on computers using Russian-language characters.

That fueled widespread speculation that the hacked documents might have been stolen and released by Russian intelligence agents to promote Le Pen, who had a friendly meeting with President Vladimir Putin in March and has borrowed 9.4 million euros from a Russian bank to fund her campaign.

Deleted tweet of France's ambassador in DC: "To be expected. Last chance offensive in favor of a candidate favored by a foreign government" pic.twitter.com/spU7nbp6vy

One Russian paper calls Emmanuel Macron a "psycopath"; another says he has "bulging fish eyes". It's clear who Moscow's backing in this race pic.twitter.com/NoV2f7IqyZ

Russia has a lot riding on Marine Le Pen's candidacy. How far would they go to help her win? https://t.co/EkZ3262Sko

“What I get from this clumsy initiative is that it reveals just how much these people think of us as imbeciles,” the blogger Jean-Marc Lafon wrote on Twitter. “You can’t love France and be convinced that the French people are fools,” he added. “You can be a patriot and have a brain.”

As Nicolas Vanderbiest, the Belgian researcher, noted, earlier this week Posobiec and a network of followers and bots were also responsible for spreading an obviously forged document that they insisted was evidence that Macron had evaded French taxes by opening a secret bank account in the Bahamas. In that case, Posobiec had used the English-language hashtag #MacronGate, which, as Samuel Laurent of Le Monde noted, betrayed the fact that it did not originate in the French-speaking world.

Even though that fake “proof” of a secret Macron account was debunked in the French media, it continued to spread on social networks, successfully confusing some voters, who were also exposed to other forgeries shared by activists from Le Pen’s National Front.

Taken together, the effort to spread forged documents and the late release of genuine material hacked from Macron’s campaign, disguised as a “leak,” might be evidence of an intentional disinformation campaign, aimed at misleading voters into thinking real evidence of malfeasance by Macron had been provided to the media but was being suppressed.