Why Donald Trump Is Scared of Sally Yates

Yates is expected, in testimony Monday, to contradict the White House’s narrative on Michael Flynn’s contacts with Russia. 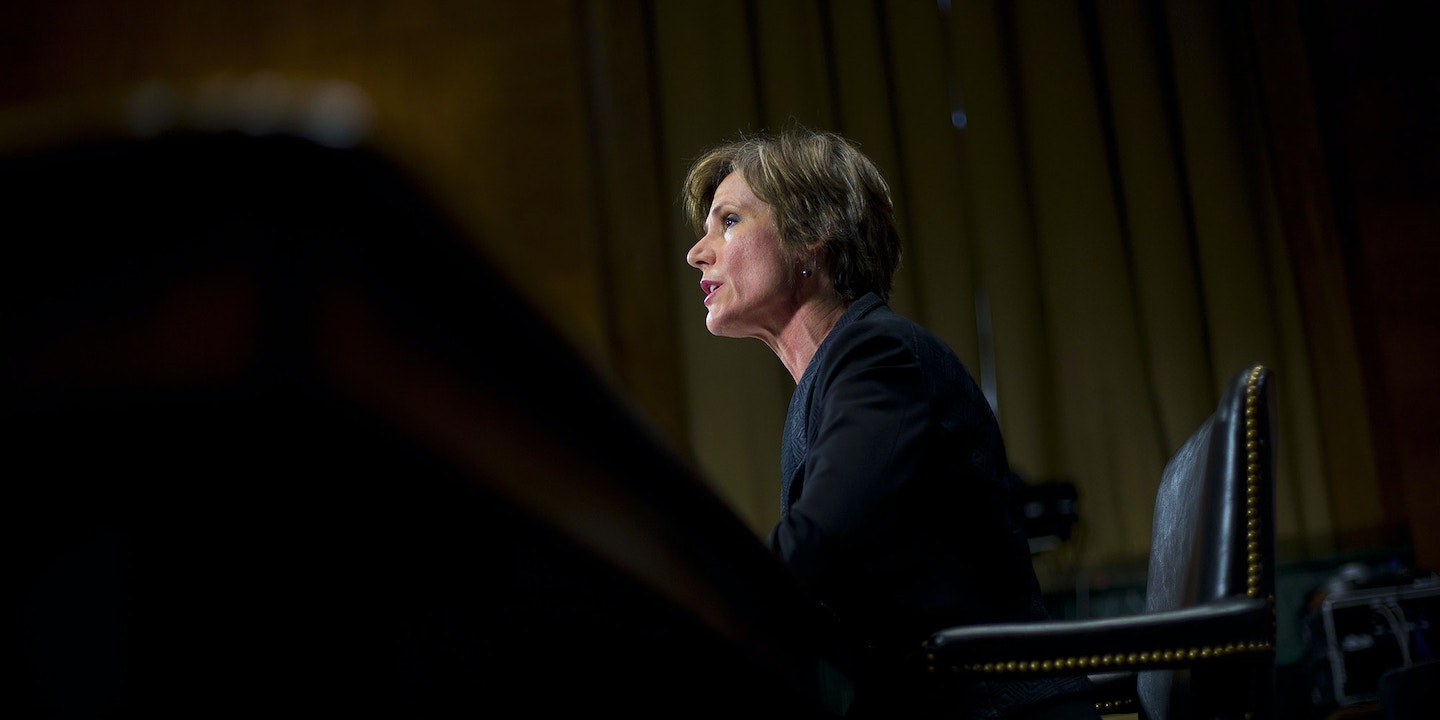 Sally Yates, who led the Department of Justice during President Trump’s first days in office, is scheduled to testify on Monday afternoon before a subcommittee of the Senate Judiciary Committee. Yates’s testimony is expected to contradict what the Trump White House has said about Michael Flynn, the former national security adviser, and the extent of his contacts with the Russian government.

If President Trump respected the separation of powers, he’d leave Congress alone and let the lawmakers ask Yates whatever questions they want to ask. Instead, just before 8 o’clock this morning, he tweeted this:

General Flynn was given the highest security clearance by the Obama Administration - but the Fake News seldom likes talking about that.

Less than half an hour later, came this:

It should be “counsel,” not “council,” as Trump apparently realized, making that correction two hours later. But the president’s inability to spell correctly is a quibble compared to his ignorance of Civics 101.

One of the main reasons we have congressional committees is to act as a check on the powers of the executive branch. It isn’t the president’s place to interfere with congressional proceedings by using his electronic bully pulpit to propose his own questions and impugn the credibility of witnesses. After all, he has plenty of his own investigative toys to play with. If he thinks that classified information has been leaked, he can call Jeff Sessions, the current attorney general. If he wants the public to know the full story of Michael Flynn, he can order the declassification of Flynn’s personnel records as well as records of Flynn’s reportedly extensive contacts with Sergey Kislyak, the Russian ambassador.

Instead, Trump has decided to disrespect the independence of a separate branch of government. This isn’t the first time he’s taken such an approach. In March, he tweeted this in the midst of FBI Director Jim Comey’s testimony to the House Intelligence Committee:

Trump’s claim was a lie — neither the NSA nor the FBI has reached any such conclusion. Comey was on Capitol Hill to give Congress and the public urgently sought answers about Russia’s role in the 2016 election. Instead, the FBI director was forced to waste valuable bandwidth fact-checking the president in real time.

Yates had been scheduled to testify in an open hearing before the House Intelligence Committee in March. That hearing was abruptly called off by the committee’s chairman, Rep. Devin Nunes, who did not consult his fellow committee members and later recused himself from the committee’s Russia probe. In a letter, Yates’s lawyers said that the administration had tried to forbid her from testifying, claiming that her warnings about Flynn were “client confidences.” Sean Spicer, the White House press secretary, denied Trump had stood in Yates’s way. “I hope she testifies,” he said on March 28. “I look forward to it.”

The title of today’s Senate hearing is “Russian Interference in the 2016 United States Election.” It may wind up being another case of presidential interference in congressional business. If Trump insists on interposing himself between Congress and its search for the facts, Congress should consider appointing a special prosecutor to make sure the job gets done.