Given that Trump is so fond of calling unflattering reports “fake news,” that he chose not to do so appears to be a tacit admission that this story is true. 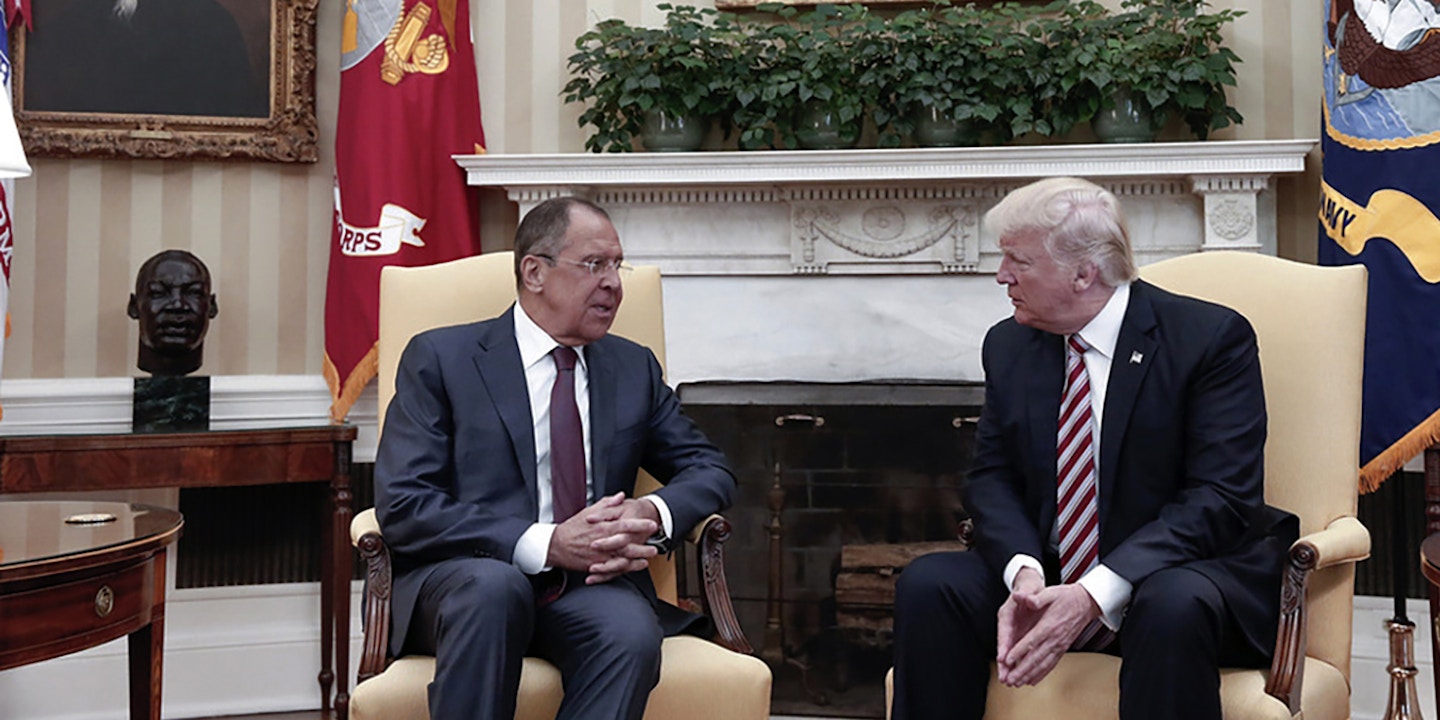 Twelve hours after his national security adviser called a Washington Post report that he had shared highly classified information with Russia “false,” President Donald Trump chose not to do so, arguing instead that his office gives him “the absolute right” to share “facts pertaining to terrorism and airline flight safety” with even an adversary.

In two unusually restrained and carefully worded tweets posted Tuesday morning, Trump seemed to admit that he had, as The Post reported, described “details of an Islamic State terrorist threat related to the use of laptop computers on aircraft,” in his Oval Office meeting last week with Russia’s foreign minister, Sergey Lavrov, and ambassador to Washington, Sergey Kislyak.

As President I wanted to share with Russia (at an openly scheduled W.H. meeting) which I have the absolute right to do, facts pertaining....

...to terrorism and airline flight safety. Humanitarian reasons, plus I want Russia to greatly step up their fight against ISIS & terrorism.

Given that Trump is usually so fond of tweeting allegations of “fake news” in response to unflattering reports, that he did not do so in this case appears to be a tacit admission that he did share intelligence on militants in Syria with the Russians and that, as The Post reported, currently serving United States officials are aware that he did.

Rather than contest the accuracy of the report, Trump focused on the fact that, as president, he has the legal authority to declassify information and so cannot be prosecuted for sharing secrets with Russia, as any other government official could be. He also tried to cast it as a generous and wise move.

Since the U.S. government recently barred the use of laptops on board flights from the Middle East because of a reported Islamic State plot, however, it is unclear how Trump could have tried to help Russia unless he did share some previously unreported detail.

While the White House argued later in the morning that Trump’s statement was not an admission that he had shared classified information, an official with knowledge of the exchange told The Post that he had. According to the official, Trump made the perhaps inadvertent revelation while boasting about what he knew of a reported Islamic State plot to use a laptop to bomb a commercial flight to the U.S. An excerpt from the reported Trump monologue — “I get great intel. I have people brief me on great intel every day” — certainly sounds like something the deeply insecure commander-in-chief would say, as several observers noted.

Trump is a childish braggart, not a deliberate traitor. Which means that he is perfectly capable of leaking again.

"Excuse me, where's the lobby?"

"I don't know but here is some classified information on ISIS" pic.twitter.com/CzLOqtVil9

One European nation allied with the U.S. told The Associated Press that the possibility that Trump might share sensitive information obtained by them without their permission could lead them to stop passing on news of threats obtained in the future.

European official tells @AP their country might stop sharing intel with US if Trump gave classified info to Russian diplomats.

The episode also cast new light on Trump’s repeated assertions on the campaign trail that Hillary Clinton was unfit to govern because she had forwarded emails containing classified information to State Department aides so they could print them out for her.

... here's a look at candidate @realdonaldtrump's past comments about @hillaryclinton and how she handled classified information. pic.twitter.com/cFgepMtUps

The president’s decision to abandon the “fake news” defense also appeared to undermine his national security adviser, Lt. Gen. H. R. McMaster, who told reporters Monday night, “I was in the room, it didn’t happen.”

As the Washington Post blogger Aaron Blake pointed out, McMaster’s statement focused on denying things that The Post had not reported — that Trump had discussed intelligence sources or methods directly with the Russians or had disclosed military operations that were not already publicly known.

The national security adviser pointedly did not deny central aspects of The Post’s reporting — that U.S. officials were alarmed that Trump had divulged “aspects of the threat that the United States learned only through the espionage capabilities of” an allied nation, which had not given permission for its intelligence to be shared with Russia, and “revealed the city in the Islamic State’s territory where the U.S. intelligence partner detected the threat,” which could help Russia identify the source of the intelligence and possibly disrupt it in support of the Syrian government.

As Barton Gellman, a former Washington Post correspondent, pointed out, the fact that the newspaper was asked by government officials not to reveal details of the plot divulged by Trump strongly suggests that their report was accurate.

How to tell @gregpmiller and @GregJaffe have it right: They know *which* details Trump told Lavrov. Officials asked WP not to publish them. pic.twitter.com/J1CrVSNTVV

Trump’s admission that he did share information with the Russian diplomats — at an Oval Office meeting only a Russian news agency was allowed to photograph — also contradicted Maria Zakharova, the Russian foreign minister’s spokeswoman, who accused The Post of publishing “fake” information as part of a plot to undermine Trump by tying him to Russia. (Zakharova is the Russian official who said recently that, to understand what is really happening in the United States, “You have to talk to the Jews,” instead of reading American newspapers.)

Trump’s contradiction of the Russian spokeswoman also appeared to catch his biggest boosters, the cast of “Fox and Friends,” by surprise, as the historian Keven Kruse noted.

President Trump: It Did Happen pic.twitter.com/bZDOGjfkJK

There was some sign, too, that the episode could be eroding Trump’s support among Republicans in Congress. Representative Mike Gallagher, a Wisconsin Republican who previously served as a Marine intelligence officer in Iraq, called on the White House to provide the House and Senate intelligence committees, which are investigating Trump’s ties to Russia, with a transcript of the president’s conversation with the Russian foreign minister.

For the purpose of transparency, the White House should share a transcript of the meeting with the House and Senate intelligence committees.

As an intelligence officer by training, I know firsthand the life and death implications of safeguarding classified information.

Our allies and partners must have the utmost confidence that sensitive information they share with us will not be disclosed.

The Post’s report that such a transcript does exist also added to speculation that meetings in the Oval Office are, indeed, recorded, as Trump had hinted in a tweet threatening the fired FBI director James Comey last week.

Until the Admin provides the unedited transcript, American ppl will rightly doubt if POTUS can handle our nation’s most closely kept secrets

Later in the day, the national security adviser, Lt. Gen. H. R. McMaster, refused to deny that Trump had revealed classified information. He also offered reporters the less than reassuring fact that “the president wasn’t even aware of where this information came from; he wasn’t briefed on the source and method of the information either.”

BREAKING: NSA McMaster: “The president wasn’t even aware of where this information came from." https://t.co/zewlw83osz