Instead of fading into obscurity, John Guandolo has leveraged his status as a former FBI agent into a lucrative career training law enforcement. A former FBI agent with a penchant for spreading anti-Muslim conspiracy theories trained a senior U.S. marshal, five federal contractors, and five National Guard members at a three-day event in Louisiana, according to documents obtained by The Intercept through a Freedom of Information request.

John Guandolo, a prominent figure in what has become a cottage industry of ex-national security professionals exploiting fear of terrorism for cash, ran the March training on behalf of his firm, Understanding the Threat. Guandolo was paid $12,500 for the seminar, sponsored by the Rapides Parish District Attorney’s Office in Alexandria, which promised to show how “jihadis” operate in the United States, why understanding sharia is important to law enforcement agents, and how to “find and research jihadi organizations and leaders” in local communities. At a previous event, Guandolo labeled a local Muslim community leader as a religious extremist with no proof.

The documents obtained by The Intercept underscore how federal law enforcement and members of the military continue to frequent anti-Muslim trainings, despite past attempts to stop Islamophobic instructors from teaching soldiers and federal officers. Advocates have long expressed concern that such events encourage racial profiling and further corrode trust between government agencies and Muslim communities already weary of surveillance and infiltration by informants. They say these trainings are particularly troublesome at a time of rising anti-Muslim sentiment — sentiment that has been blessed by members of the Trump administration.

“Under no circumstances should federal law enforcement agents gain credit for attending anti-Muslim trainings, or be under the impression that it could be a legitimate part of their duties,” said Lindsay Schubiner, senior program manager at the Center for New Community, a Chicago-based group that tracks anti-Muslim trainings, referring to the continuing education credits often required of law enforcement officers. “Federal law enforcement agencies have to clearly send the message to their agents that anti-Muslim bigotry is unacceptable and that anti-Muslim conspiracy theories that Guandolo promotes should not be driving the implementation of federal law.”

Guandolo, a former FBI counterterrorism agent, resigned from the bureau in 2008 while he was being investigated by the FBI for affairs with female agents. The following year, he confirmed to the FBI that he had a sexual relationship with a key witness in a corruption case against a Democratic lawmaker in Louisiana.

But instead of fading into obscurity, Guandolo has leveraged his status as a former FBI agent into a lucrative career. Guandolo has made tens of thousands of dollars in recent years giving dozens of law enforcement trainings, many of them taxpayer funded. Sheriffs’ departments or police associations that put on conferences for local law enforcement sponsor most of Guandolo’s events. But the trainings are usually open to federal agents as well.

Guandolo has said that all American Muslim groups share the “same ideology as ISIS” and that President Obama committed “treason” by working with Muslim groups to combat terrorism. He has also called for the majority of mosques in the U.S. to be shut down and for the arrest of leaders of the Council on American-Islamic Relations, the nation’s largest Muslim American civil rights group.

Guandolo and the Rapides Parish District Attorney’s Office did not return The Intercept’s requests for comment. 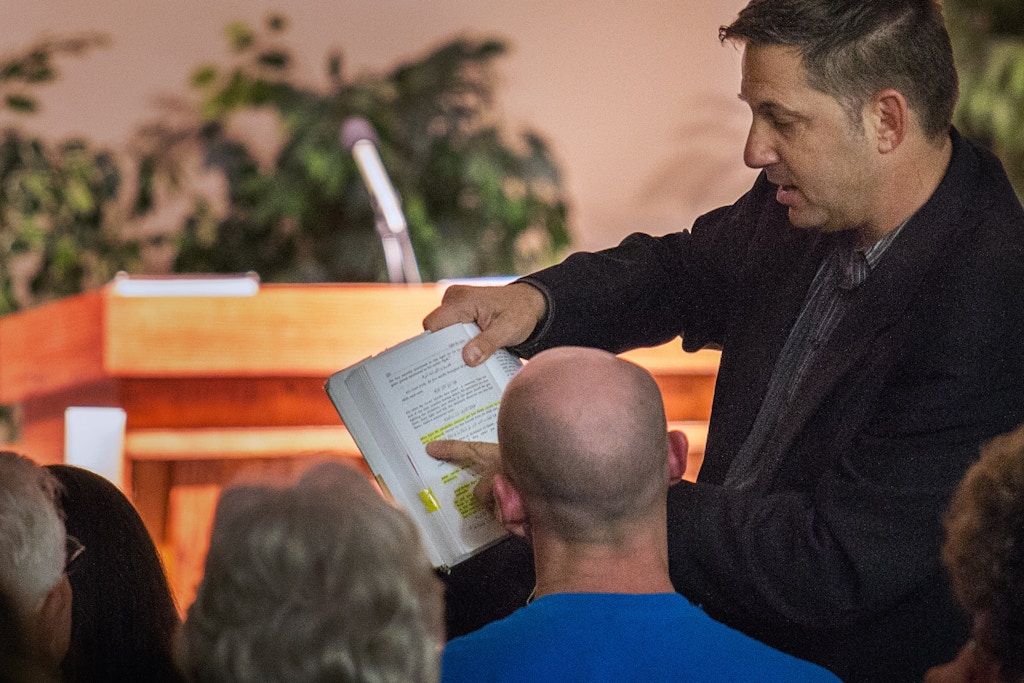 The Louisiana seminar was one of nine trainings Guandolo has given in 2017 alone. He is scheduled to give two more in June, according to the Center for New Community. Sign-in sheets for the Alexandria training obtained by The Intercept indicate that officers from nearly two dozen state and local law enforcement agencies attended, in addition to the federal employees and contractors.

Bernard McLaughlin, a mediator and former U.S. Army colonel who attended the seminar, said the training could prove especially useful for local law enforcement officers. “They don’t get taught a course on Islam or domestic terror or how radicals may plan attacks,” McLaughlin told The Intercept. “So you have to look at an introductory training just to get people oriented so they have a better understanding of Islam, what it is and what its proponents are.”

However, as critics of Guandolo have pointed out, he does not speak Arabic — the original language of the Quran — and has no scholarly expertise in Islam.

The most senior federal officer who attended the Alexandria seminar was Drew Koschny, chief inspector of the U.S. Marshals Service and deputy assistant director of Interpol Washington, the U.S. branch of the global police force Interpol.

U.S. Marshals are required to get approval from the Marshals Service before attending external trainings. But for the Guandolo training, Koschny “accepted the invitation and attended the event without completing the required USMS request for external training; therefore, the training course was not vetted and approved by the USMS,” said Drew Wade, a U.S. Marshals spokesperson. “Mr. Koschny felt the training would support his work at Interpol. He was not aware of any views attributed to individuals conducting the training.”

Four employees of Centerra, a security contractor that guards government facilities across the country, also went to the training. Three of the Centerra employees were listed in the documents as working for the Department of Energy. Another federal contractor who works for Fluor Federal Petroleum, the sole company guarding the U.S. government’s Strategic Petroleum Reserve, attended the training. The Department of Energy, Centerra, and Fluor did not respond to The Intercept’s requests for comment.

“It is very commonplace, and very typical for us as a statewide organization, to get invited to attend and participate in training that is being conducted by any number of our various partner agencies,” Col. Ed Bush, a spokesperson for the Louisiana National Guard, told The Intercept. “The fact that we attended this training is a best practice for us, and whenever possible we always try to have representation at these training events, just for our own situational awareness and to maintain those partnerships that are key to our ability to respond as a state.” He added: “Attendance isn’t an endorsement.”

This was not the first time members of the military attended a Guandolo class. In an email obtained by The Intercept through a separate public records request, Guandolo told a local detective planning an upcoming training that Department of Defense employees had signed up for his February 2014 event in Culpeper County, Virginia. And in July 2011, he gave a guest lecture at the Joint Forces Staff College to a class for captains, colonels, and commanders. In that class, Guandolo used material that justified the Crusades and claimed that Muslims were enemies of the West and commanded to hate Jews and Christians.

After Wired exposed that class and other anti-Muslim material given to FBI agents, the Obama administration ordered government agencies to review their counterterrorism trainings. The FBI purged hundreds of anti-Muslim documents from its training material. The “Understanding the Jihadi Threat” event at the Warroad Baptist Church in Warroad, Minn., Oct. 17, 2016.

But the problem of anti-Muslim counterterrorism training persists. The documents related to Guandolo’s seminar in Louisiana suggest that federal government workers have attended locally sponsored anti-Muslim events with little oversight.

And the problem isn’t limited to Guandolo. In March, CAIR asked the U.S. Air Force to cut its ties with Patrick Dunleavy, an instructor who lectures at the United States Air Force Special Operations School in Florida. Dunleavy has written that the values of religious freedom and free speech are “contrary to the moral code of Islam” and that “to many Muslim parents, visions of violence and death” are the future they aspire to.

“It doesn’t look like this is an area where the federal government is doing its job and ensuring that its employees don’t participate in bigoted trainings,” said Farhana Khera, the executive director of Muslim Advocates.

In 2011, Khera secured a commitment from John Brennan, then President Obama’s counterterrorism adviser, to create an interagency task force to ensure that law enforcement training material was not biased. But in 2014, after The Intercept published a document showing anti-Muslim bias in National Security Agency training documents, Muslim Advocates and dozens of other organizations called on the Obama administration to go beyond that task force. They asked the administration to be more transparent about how pervasive anti-Muslim trainings were and to ensure that the officials responsible were disciplined and the participants in those trainings were retrained. It is unclear if the Obama administration took any of those steps.

While biased trainings for federal employees are not a new issue, civil rights groups say they are especially disturbing in light of the election of Donald Trump, who has brought anti-Muslim activists like White House strategist Steve Bannon — who hosted Guandolo on his Breitbart radio show — into the halls of power.

“It’s even more troubling today because we now have a president and senior members of his administration who traffic in anti-Muslim bigotry,” said Khera. “So our concern is that you have the senior most official in the U.S. government giving a wink-wink, nod-nod to exactly this kind of bigotry.”