Donald Trump’s War on Journalism Has Begun. But Journalists Are Not His Main Target.

Government officials who leak information are the ultimate targets of Trump’s assault on journalism. There is no constitutional right to tell the truth to reporters. Wars are rarely announced in advance, but President Trump provided an abundance of warning about his intention to wage an assault on journalism. During the election campaign, he called journalists an “enemy of the people” and described media organizations he didn’t like as “fake news.” You can pretty much draw a direct line between his words and the actions we’ve seen lately — which include journalists physically prevented from asking questions of officials, arrested when trying to do so, and in a now-famous example from Montana, body-slammed to the ground by a Republican candidate who didn’t want to discuss his party’s position on healthcare.

This is most likely a prelude. From virtually the moment Trump took the oath of office, a deluge of irritating leaks has poured forth about, for instance, his private complaints against senior aides and his late night habits when he is upstairs at the White House without a tweet-blocking retinue of aides. Matters of crucial substance have also been leaked, such as his own disclosure of highly classified information to Russia’s foreign minister, and his obstruction-of-justice-worthy request to James Comey that the FBI restrain its investigation of Michael Flynn. Just a few days ago, there was another leak that wasn’t even Trump-centric, disclosing information about the British investigation into the suicide bombing in Manchester.

“These leaks have been going on for a long time, and my administration will get to the bottom of this,” Trump warned in a statement on Thursday. “The leaks of sensitive information pose a grave threat to our national security. I am asking the Department of Justice and other relevant agencies to launch a complete review of this matter, and if appropriate, the culprit should be prosecuted to the fullest extent of the law.”

Trump is known for his post-thinking bluster but here he means what he suggests about indictments. Of course he’s using national security as a fig leaf to obscure his principal concern about the damage to his own image, which is being shredded. He is taking advantage of the unfortunate groundwork laid by his predecessor, Barack Obama, who oversaw an unprecedented crackdown on the press by deploying the draconian Espionage Act against leakers. Far worse is almost certainly coming from Trump. One of the recent leaks that embarrassed him revealed, ironically, his demand to Comey that the FBI put journalists in jail if they refuse to disclose their sources. 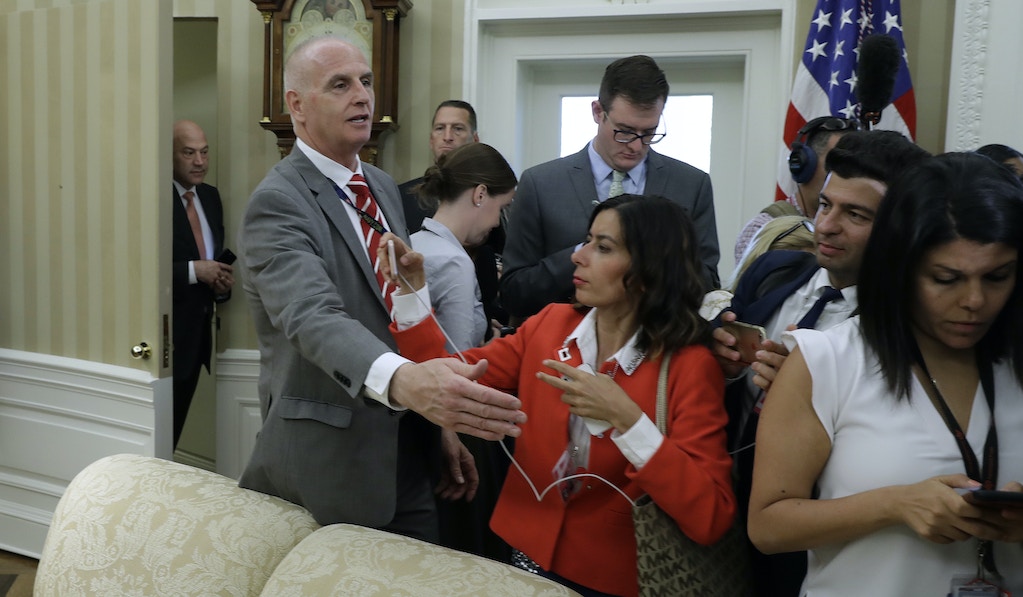 Director of Oval Office Operations Keith Schiller escorts reporters out of the Oval Office of the White House in Washington, Tuesday, May 16, 2017, during President Donald Trump’s meeting with Turkish President Recep Tayyip Erdogan.

Journalists are not the real target of Trump’s war on journalism, however. We are the highly-visible collateral damage, the broken glasses on the bruised body of free expression. The true targets – the people whom the Trump administration most wants to punish and silence – are the government officials who provide us with the news for our stories. The First Amendment protects journalists but not their sources; there is no constitutional right to tell journalists the truth.

These people, our sources, are incredibly vulnerable, lacking in most cases the financial and legal resources that are available to most journalists. When journalists are threatened by the government, there is a ready-made community to defend them, including advocacy groups that will rise to their aid, and a social network of colleagues who will stand by their side. A government official who leaks to a journalist has almost none of that. Instead of gaining the support of co-workers when punishment is threatened, the likeliest outcome is ostracism, because everyone else fears for their job. If you are a journalist and the government goes after you, the odds are quite good that your employer will strongly support you, but a government leaker faces the opposite predicament – their employer is the one attacking them.

Financial ruin usually comes next. I have written about several of the most notable Espionage Act prosecutions in recent years, including the case of Stephen Kim, a State Department diplomat accused of disclosing classified information to a journalist. (The information about North Korea, according to a State Department official quoted in court documents, was “a nothing burger.”) Facing the possibility of more than a decade in prison if he was convicted by a jury, Kim agreed to a plea deal and a sentence of 13 months. The case drained his finances as well as his relatives’, and he often considered killing himself. “Everything was just a blur,” he told me. “I compare it to losing all five senses at the same time. You don’t see anything, you don’t smell anything, you don’t hear anything. Nothing. That’s the only way I can describe it.” 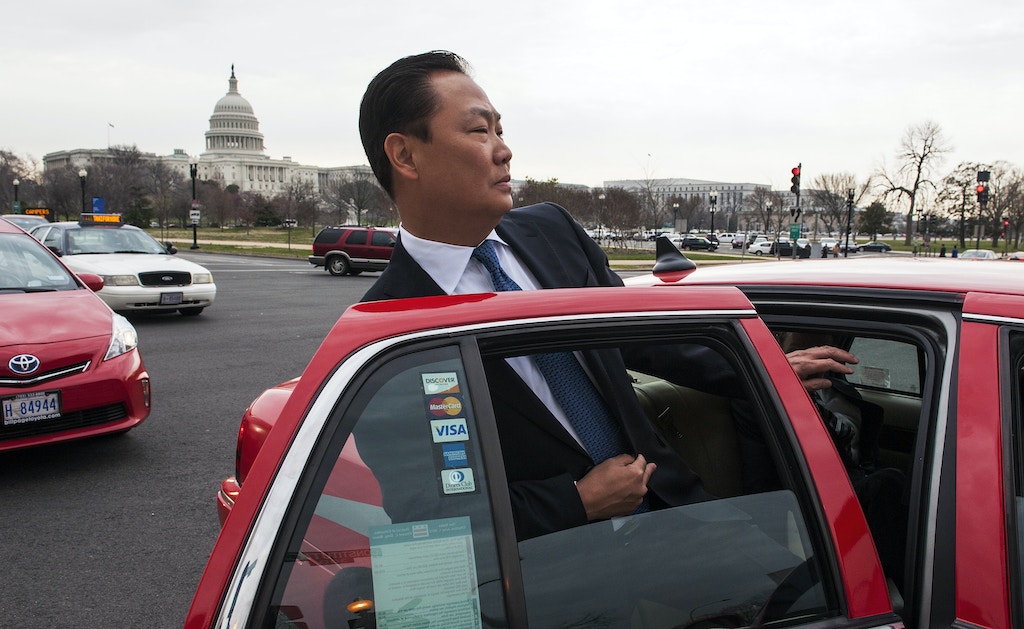 Stephen Kim, a former State Department expert on North Korea, leaves federal court in Washington on April 2, 2014 after a judge sentenced him to 13 months in prison for passing classified information to a journalist.

Here’s a bit of what I wrote about his ordeal:

After devoting more than a decade of his life to preventing North Korea from building a nuclear arsenal, he was now accused of helping Pyongyang. How could he live with the stain of what his government accused him of doing? Espionage. What could he say to his young son? To his elderly parents? “Every single day, I thought about killing myself,” Kim said. He went online to find out how many sleeping pills or Tylenol he would need to swallow to end his life. He considered jumping in front of a train, because that would be quick. He made plans for letting people know he had committed suicide, deciding that he would send a note to a friend and explain that it should be opened on a certain day; inside he would place his house and car keys. “It’s a ruthless calculus — you don’t think like a normal person,” Kim told me. “I’m not proud of it, but I’m not ashamed of it, either. Why should I be? Have you gone through what I have?”

Outcomes vary, but none are enviable. Edward Snowden, who leaked a trove of documents from the National Security Agency, has been able to avoid prison by gaining political refuge in Russia. He fled because if you are indicted under the Espionage Act, as he was, you are not allowed to present a public-interest defense — meaning, you are not allowed to justify the crime of leaking by arguing it was done to disclose to the public even greater crimes the government was committing. Chelsea Manning, who as an Army soldier leaked thousands of documents that disclosed U.S. war crimes, was sentenced to 35 years in prison, though she is now free after serving seven years and receiving a pardon from Obama as he left office.

Today’s leakers can expect no mercy from the incensed Trump administration, which is stacked, no surprise, with a murderers’ row of First Amendment antagonists, leading off with Trump. Next to him, there is Attorney General Jeff Sessions, who said, when asked in March if there would be indictments, “We’ve never seen this kind of leaking. It’s almost as if people think they have a right to violate the law, and this has got to end, and probably it will take some convictions to put an end to it.”

His number two at the Department of Justice, Rod Rosenstein, was the driving force behind the prosecution last year of Gen. James Cartwright, who pleaded guilty to lying to the FBI about leaking to reporters (Cartwright was later pardoned by Obama and did not go to prison). In a sentencing memo, Rosenstein painted a stark picture, writing that “the need for deterrence is strong. Every day across the United States government, individuals are entrusted with highly sensitive classified information. They must understand that disclosing such information to persons not authorized to receive it has severe consequences.”

For Trump, who himself has disclosed a surprising amount of sensitive intelligence, the national security argument is window dressing. The leaks he truly despises are the ones that embarrass him personally. This points to a key problem of leak crackdowns: a large amount of information is classified mainly because it would embarrass the government if made public. Senior officials routinely exaggerate the national security repercussions and brush aside the benefits to our society. But even former Defense Secretary Robert Gates has acknowledged, for instance, that the consequences of Manning’s leak were “fairly modest.”

Nonetheless, Trump’s war on journalism is moving ahead. The resistance to it should not be modest.

Top photo: Reporters near the West Wing of The White House in Washington on May, 15, 2017, following news reports that President Trump revealed classified information to visiting Russian officials.