Jeremy Corbyn spent much of the day mocking Prime Minister Theresa May for refusing to appear alongside him at a televised debate on Wednesday night. 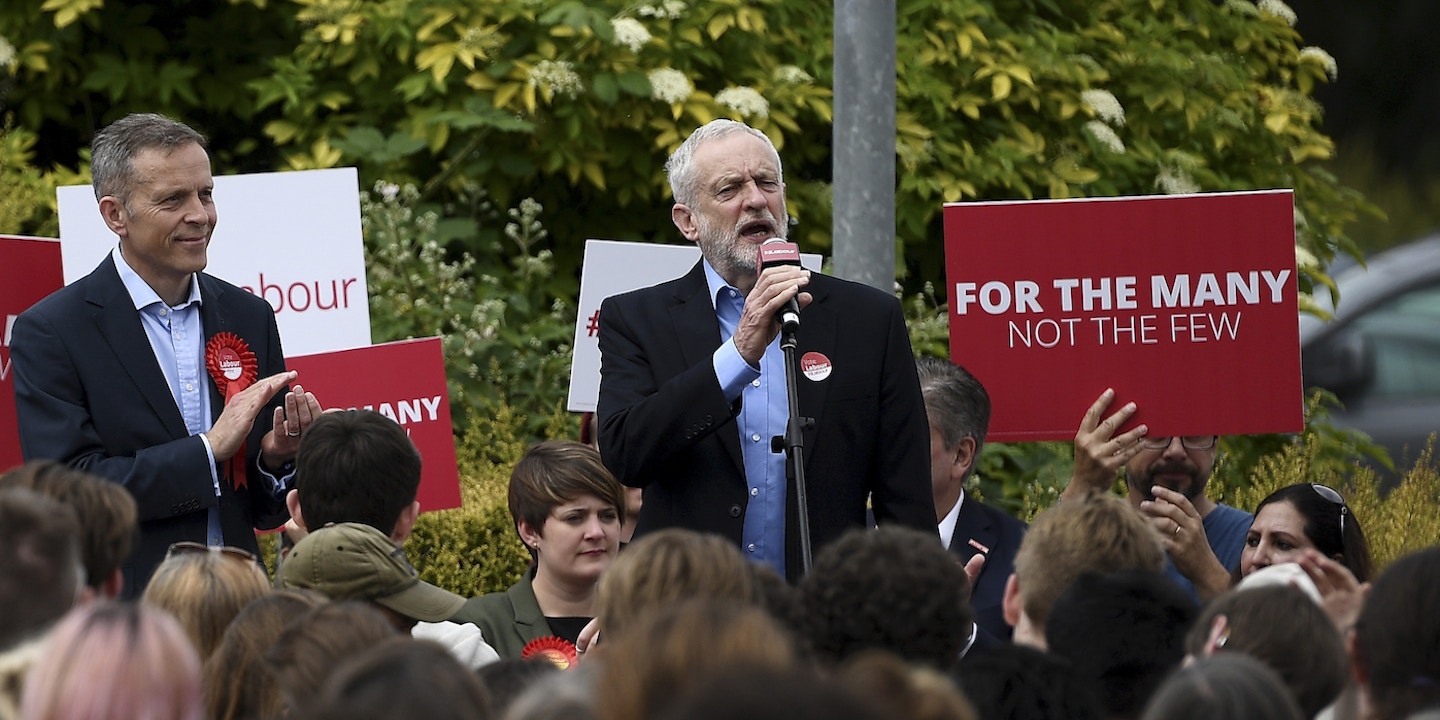 After a dramatic tightening in the polls ahead of next week’s general election in the United Kingdom, and a series of nervous performances by Prime Minister Theresa May, the opposition leader, Jeremy Corbyn, spent much of the day mocking his rival for refusing to even attend a televised debate on Wednesday night.

At tonight's #BBCdebate I'll set out our vision of a Britain #ForTheMany. Will @Theresa_May come & defend her record of working for the few? pic.twitter.com/OCFgWQsbWY

Corbyn, the left-wing Labour Party leader, had initially intended to skip the debate himself, since the Conservative prime minister would not be present, but, buoyed by new polling that shows his party closing on the Conservatives and an assured performance in a televised forum earlier in the week, he changed course and tried to goad May into joining him.

.@Theresa_May come & debate me. Any time. Any place. Britain deserves to see the only two people who could be the next Prime Minister debate pic.twitter.com/hM6wK9e32B

As Corbyn noted, the prime minister had agreed to participate in the televised town hall hosted by Channel 4 News and Sky on Monday, but only on the condition that she not be on stage at the same time as her rival.

When May was asked about her decision to send Amber Rudd, the outgoing home secretary, to understudy for her in a debate with Corbyn and leaders of the other parties, she laughed nervously — as she tends to when put on the spot — before suggesting that debates were trivial compared to the important work of preparing for imminent negotiations with the European Union over Britain’s exit. That response was quickly turned into a viral ad by Corbyn.

Britain deserves to see a debate between the two candidates for Prime Minister. Refusing to join tonight's #BBCdebate is a sign of weakness. pic.twitter.com/nsTjv12kS6

May’s critics were quick to note that if she does see electoral politics as a distraction from the important work of trying to keep Brexit from imploding the British economy, it seems reasonable to ask why she chose to dissolve Parliament and force this election in the first place.

May’s decision to avoid the debate stage makes sense given how underwhelming she was in this week’s televised town hall — during which some audience members openly laughed at her — but it is a dramatic reversal from the “presidential style” campaign her advisers initially charted for her, in which her supposedly clear advantage over Corbyn as a plausible prime minister was supposed to be the main focus. Prime Minister Theresa May’s re-election campaign has been so focused on herself that her party’s name is not featured on the bus she tours the country in.

While polling continues to show May’s Conservative Party ahead in the national popular vote, albeit by as little as three percentage points in some recent surveys, the British Parliament is elected not on that basis but in 650 head-to-head contests for seats, which can vary widely from the overall share achieved by the leading parties.

One new seat-by-seat analysis, released on Tuesday by the polling firm YouGov, suggests that May’s gamble in calling an early election could backfire dramatically — with her party remaining the largest one in the new Parliament but losing up to 20 seats and no longer holding the majority necessary to form a government on its own.

That result would produce what is known as a hung Parliament, in which no party would have the undisputed right to form a government on its own, making it necessary to broker some sort of coalition, like the Conservative alliance with the Liberal Democrats that ruled from 2010 to 2015. At this moment, however, with the Liberal Democrats still reeling from the damage that coalition did to their party, and horrified by the Conservative-led plans for Brexit, such an arrangement seems unlikely. A breakdown of seats along the median line of the YouGov projection could even make it impossible for any plausible coalition to command a majority, making yet another general election necessary.

The ensuing chaos would probably be fatal for May, given that she previously had a secure majority that would have allowed her to rule until 2020, after the Brexit negotiations were concluded, but was seduced into forcing an early election by the widespread belief that Labour was so weak under Corbyn’s leadership that a Conservative landslide was inevitable.

Stephan Shakespeare, YouGov’s chief executive, cautioned that his firm’s model, which points to the possibility of a hung Parliament, also includes enough “leeway” that the Conservatives could still end up with as many as 345 seats when the votes are counted on June 8, giving May the increased majority she expected.

One of May’s senior advisers, Jim Messina, who was Barack Obama’s campaign manager in 2012, derided the YouGov projection later on Wednesday.

Spent the day laughing at yet another stupid poll from .@yougov. Hey .@benleet do you want to bet for charity? I'll take the over.

While polls suggest that Corbyn is unlikely to appeal to a wide enough swath of the British electorate to win a majority of seats for Labour, his popularity with meme-creating younger voters — energized by a more progressive platform than the centrists who led the party before him — could yet deny May the majority she expected at the campaign’s outset.

As Nate Silver points out, one reason for the wide variation in what British pollsters expect to happen is that their models disagree on the question of what the electorate will look like.

The HuffPost average shows Conservatives only 3 points ahead. Those adjustments make a huge difference for some polls. pic.twitter.com/l4toi3Ys75

If, as in past elections, older voters go to the polls in far larger numbers than the young, the Conservatives could still win a comfortable majority.

This poll would be a 3% Tory lead but it turns into 12% because of weighting predicted turnout by age and class at the last election. https://t.co/GYLVWgBEB5

It remains possible, however, that Corbyn’s supporters are right to guess that enthusiasm for him could produce a spike in turnout from younger voters, meaning that expectations could still be upended next Thursday.