The British prime minister refused to meet those impacted by the London fire, unlike the opposition leader Jeremy Corbyn, who comforted grieving survivors. As families of those still missing appealed for help in finding their loved ones, Prime Minister Theresa May visited the scene of a deadly fire at Grenfell Tower in Kensington, West London, on Thursday, but declined to meet survivors.

BBC reporting that, during her visit, Theresa May did not meet any of the survivors of #GrenfellTower for "security reasons"

Feeling genuinely angry that Theresa May would go to the scene of a disaster like Grenfell and choose not to speak to residents.

Strange world when Adele has visited the Grenfell Tower site and met with residents but Theresa May hasn't.

Theresa May has just "privately visited" #GrenfellTower She didn't meet residents or media, but was quite happy to get a photo-op out of it. pic.twitter.com/vbS46mYxt3

May, whose new chief of staff has been accused of failing to implement the recommendations of a fire safety review that might have prevented the tragedy, also refused to permit journalists to accompany her during a briefing by firefighters.

That shielded her from uncomfortable questions — about her own role in “radical reforms” that saved money but cut the number of firefighters by 10,000 nationwide — and made for a striking contrast with a visit by Jeremy Corbyn, the leader of the opposition Labour Party, who spent an emotional half hour with residents and relatives of the victims. 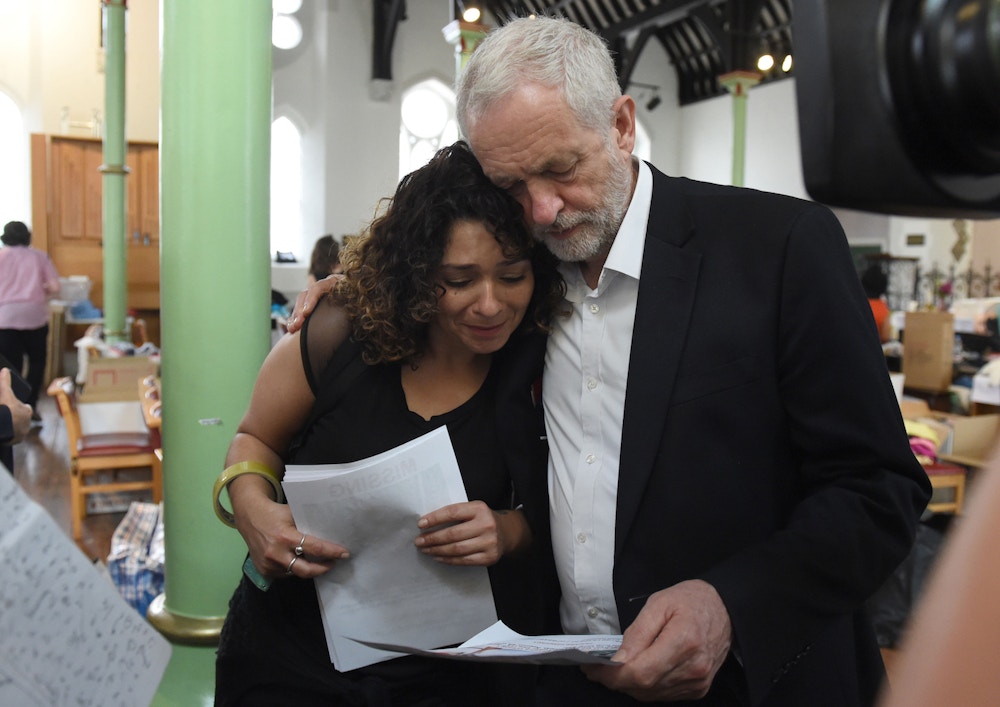 At St. Clement’s Church in West London on Thursday, Jeremy Corbyn hugged a woman searching for a missing girl who was in Grenfell Tower when a deadly fire broke out early on Wednesday.

At one stage, Corbyn hugged a distraught woman who handed him a poster of Jessica Urbano, a missing 12-year-old girl last heard from in a phone call to her mother from the 20th floor of the tower early Wednesday morning.

My niece Jessica is still missing #GrenfellFire we are searching hospitals and not been given any news please have her in your prayers pic.twitter.com/mHpL0U8wHO

Corbyn also promised residents that he would make sure those responsible for failing to prevent the fire were held accountable. Although the confirmed death toll reached 17 on Thursday, many more residents are missing and the structure is not yet safe enough for recovery teams to search it completely.

Contrast this with Theresa May's cowardly hiding. We need real leadership to get to the bottom of this tragedy pic.twitter.com/EGSA3P2eur

Distraught woman resident tells Jeremy Corbyn: "Theresa May was here but she didn't speak to any of us. She was s**t."

The Labour leader was accompanied by Emma Dent Coad, who was narrowly elected to Parliament last week to represent Kensington, the country’s richest constituency. Dent Coad told The Guardian on Thursday that “this fire was entirely preventable,” if only the Conservative-led local council had listened to the repeated warnings of fire safety lapses put in writing by residents.

She also suggested that the council, which is responsible for public housing blocs in the area, like Grenfell Tower, was at fault for not ensuring that a new facade, of aluminum rain-screen cladding added to the outside of the building recently to improve its appearance, did not pose a fire risk.

While some defenders of May and her party tried to argue that the tragedy was not a political matter, her housing ministry failed to follow advice to retrofit old housing towers with sprinklers following an investigation into a 2009 fire that killed six people.

"There is *nothing* more political than the allocation of public resources."

Experts have suggested that the cladding might have acted like an exterior chimney, allowing a fire in one apartment to sweep up the outside and engulf the whole 24-story building.

“There is no way fire should spread that quickly on a newly refurbished building” - architect and broadcaster @MrGeorgeClarke #GrenfellTower pic.twitter.com/hiCEzHT97Z

Dent Coad added that the neglect of fire safety at Grenfell Tower appeared to be part of a wider lack of care for the area’s less working class and poor residents. “We have a very rich council which spent 26 million pounds repaving Exhibition Road for tourists at the same time as it was closing nurseries, pruning youth clubs, closing older people’s lunch clubs, not investing in social care.”

Anger at the prime minister’s decision to hide from those impacted by the fire came as new polling revealed that her net favorability rating had plunged from +10 percent in April, when she called an early general election, to -34 percent.

Theresa May's net favourability score plummets to -34 - about the level Corbyn was on in November https://t.co/F42LapVcLL pic.twitter.com/3FlQ5w0S5c

According to the pollsters at YouGov, May’s personal popularity has plummeted by 29 points in the past two weeks. That period coincided with a terrorist attack in London — which focused attention on May’s role in cuts to the police force — and the prime minister’s decision to cling to power by forming an alliance with Northern Ireland’s ultraconservative Democratic Unionist Party.

"They're justifiably angry and I share their anger" - @SadiqKhan talks to Sky News after meeting many affected by the #GrenfellTower fire pic.twitter.com/d0zNvXZ3fM

The mayor also insisted that a public inquiry into the disaster May promised had to be completed quickly, given that so many other Londoners live in high-rise buildings that need to be made safe.

Khan’s predecessor, Boris Johnson, came in for plenty of abuse on social networks for his part in reducing the number of fire stations in the capital during his time in office.

My thoughts and prayers are with everyone caught up in the horrific towerblock fire in London.

Do you know what's better than thoughts and prayers? A properly funded fire department https://t.co/A3PRbKuRpb

As Mayor of London, you told an Assembly member querying your claim that fire service cuts somehow 'improved' the service to "get stuffed". https://t.co/7jTB3H0lKp

Top photo: Prime Minister Theresa May speaks to Dany Cotton, commissioner of the London Fire Brigade, with members of the fire service as she visits Grenfell Tower on June 15, 2017, in London.