Donald Trump interrupted a phone call to Ireland’s new leader to ask a “beautiful” Irish reporter where she was from, and praise her “nice smile.” 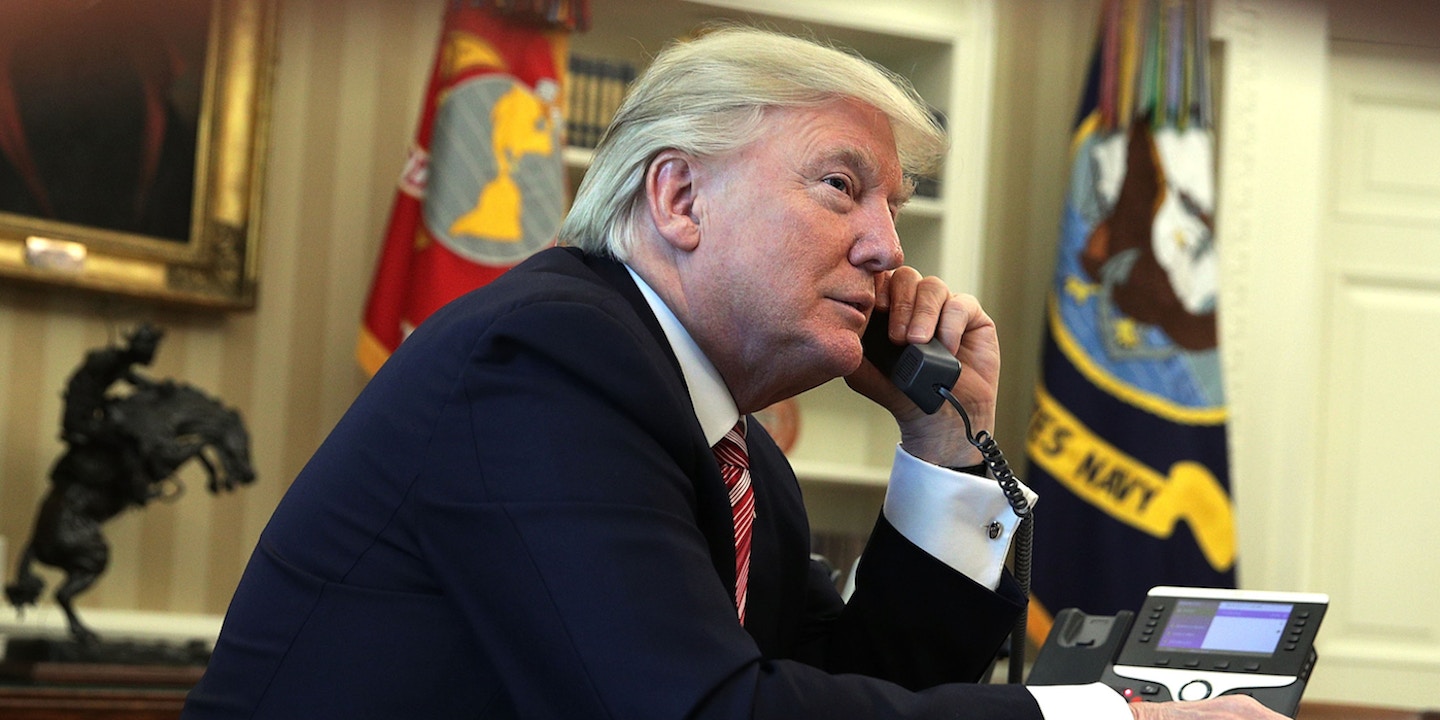 Demonstrating once again that official business will not deter him from his mission to make America creepy again, Donald Trump interrupted a phone call to Ireland’s new leader on Tuesday to ask a “beautiful” Irish reporter where she was from, summon her over to his desk, and praise her “nice smile.”

Video of the bizarre moment when President @realDonaldTrump called me over during his call with Taoiseach @campaignforLeo Varadkar. @rtenews pic.twitter.com/TMl2SFQaji

The reporter, Caitriona Perry, shared video of what she called “the bizarre moment” Trump singled her out during his phone conversation with Leo Varadkar, Ireland’s new taoiseach, or prime minister.

Perry’s employer, the Irish state broadcaster RTE, passed the moment off as light-hearted fun, captioning her own video of the encounter on Facebook as evidence that she got “the Presidential Seal of Approval from Donald Trump.”

Perry’s video shows that Gary Cohn, the director of Trump’s National Economic Council, and Dina Powell, a deputy national security adviser, laughed as the president told Varadkar that Perry “has a nice smile on her face, so I bet she treats you well.”

Many viewers of the clip, however, found it deeply uncomfortable to watch, with some describing it as a textbook example of workplace harassment.

That moment when the president of the US treats an international reporter like a goddamn pageant contestant. pic.twitter.com/fOXzXxrzlJ

A professional journalist is told by Trump "she has a nice smile on her face." How long are women supposed to put up with this crap? https://t.co/Cmhwvw6kkM

Good on Caitriona Perry for keeping her dignity and professionalism intact, but why are more people not finding this insanely creepy? https://t.co/qIfbJDSMAX

its almost like we elected a self professed sexual predator ?

We apologize that our president is a weird, inappropriate creep.

We apologize for this demented buffoon caveman, the admitted sexual predator, and are working on the problem. Please forgive us.

It's hell to be objectified. When POTUS has no fear of doing that surrounded by cameras... I'm so sorry. Your success is more than a smile.

Indeed, Trump’s behavior does seem to meet the definition of sexual harassment posted online by the U.S. Equal Employment Opportunity Commission, which says that “unwelcome sexual advances,” or “verbal or physical harassment of a sexual nature… is illegal when it is so frequent or severe that it creates a hostile or offensive work environment.” Such behavior is an offense, the commission makes clear, even when carried out by “someone who is not an employee of the employer, such as a client or customer.”

It is impossible to know what motivated Trump to pause his congratulatory call to Varadkar for such a display, but reporters in the room noted that the start of the call was delayed, as the real estate heir in the Oval Office was forced to wait on hold for more than 90 seconds before Ireland’s leader took the call.

@campaignforleo left Donald Trump on hold for 90 seconds ... I've never been prouder of a Taoiseach ???

Trump then began the call by turning to his favorite subject: electoral victories. “Congratulations on your great victory,” Trump told Varadkar. “That was a great victory that you had.”

Trump, whose own great victory in America’s electoral college came despite getting 2.9 million fewer votes than Hillary Clinton, was perhaps unaware of the irony that Varadkar became Ireland’s premier last month without any popular mandate. He was appointed leader of the governing Fine Gael party thanks to the quirks of its own electoral college system — which declared him the winner because overwhelming support from his fellow members of parliament, acting as super-delegates, cancelled out an embarrassing loss, by 30 percentage points, in a ballot of party members.

Varadkar, a 38-year-old doctor who is openly gay, and Ireland’s first leader to be the son of an immigrant, said on Wednesday that he did not intend to slight the president by keeping him waiting.

Although Varadkar is known for his conservative politics, he made no secret of his doubts about Trump’s fitness for office last summer, when he was asked on Irish radio to comment on the Republican’s race against Clinton. “Hillary actually isn’t a great debater, but she’s not crazy, so I imagine she would win those debates against Trump quite solidly,” Varadkar told RTE after the Republican convention last July.