A Russian lawyer invited to Trump Tower on June 9, 2016, was accompanied by a Russian-American lobbyist working to repeal sanctions on Russian officials. The latest revelation about the Trump campaign’s secret meeting with Natalia Veselnitskaya on June 9, 2016, is that the Russian lawyer was accompanied to Trump Tower that day by Rinat Akhmetshin, a Russian-American lobbyist who was working to repeal sanctions on Russian officials implicated in human rights abuses.

The presence of the lobbyist, and his rumored ties to Russian intelligence, undercut claims of transparency by Donald Trump Jr. who somehow failed to mention it in any of his accounts of the meeting, which was also attended by his father’s campaign chairman at the time, Paul Manafort, and Jared Kushner, whose legal team disclosed it to the FBI recently.

But the fact that Akhmetshin was granted an audience with senior campaign officials could be another indication that Russian attempts to help elect Donald Trump president of the United States might have been part of a broader effort to get sanctions lifted without acceding to American pressure to make democratic reforms at home or withdraw support from separatist rebels in Ukraine.

After email correspondence setting up the meeting was leaked to the New York Times this week, the president’s son admitted that he had agreed to it because a Russian business partner had passed on word that a senior Kremlin official wanted to help the Trump campaign by providing intelligence on Hillary Clinton.

He denied, however, that the Russian who came to the meeting, Veselnitskaya, brought any dirt on Clinton with her from Moscow.

Instead, both Donald Trump Jr. and Veselnitskaya now maintain, the lawyer came to Trump Tower to speak to the Trump campaign about her quest to repeal the Magnitsky Law, a measure passed by Congress in 2012 that set up a mechanism to sanction foreign official involved in rights abuses. After the law was passed, the Obama Administration sanctioned Russians connected to the death of Sergei Magnitsky, a lawyer who died in custody in 2009 after accusing officials of embezzling $230 million in proceeds from a tax fraud scheme. The younger Trump’s initial claim that the meeting was just about the stalled adoption of Russian children by American families is related to the Magnitsky because Russia imposed a ban on such adoptions in retaliation for those sanctions.

According to a complaint filed with the Justice Department last year by lawyers for Magnitsky’s former employer, the American investor William Browder, Akhmetshin had been working for Veselnitskaya to undercut the Magnitsky Law.

The same complaint also accused Akhmetshin of being “a former member of the Russian military intelligence services,” an accusation the lobbyist denied in an email to Radio Free Europe/Radio Liberty last year. However, Steve LeVine, a former New York Times investigative journalist who first used Akhmetshin as a source two decades ago, reported in Axios on Friday that in 1998, the lobbyist “openly described his years as an officer in the Soviet GRU, the military intelligence arm, serving in Afghanistan.”

In an interview with NBC News earlier this week, Veselnitskaya had insisted that her work was completely unconnected to the Russian government, and was instead motivated by humanitarian concern for the orphans deprived of a chance to find new homes with American families.

That contention would appear to be undermined by the fact that Veselnitskaya apparently came to the meeting at Trump Tower that day directly from a court appearance in Lower Manhattan, where she had been defending the firm of a Russian client accused by the federal government of money laundering in a scheme to hide some of the proceeds from the tax fraud uncovered by Magnitsky before his death. (An email to Donald Trump Jr. asking to delay the meeting until 4 p.m. on June 9 said that Veselnitskaya would be “in court until 3.” Her client’s firm, Prevezon Holdings, was scheduled to appear before the 2nd Circuit Court of Appeals that same day.)

The federal government dropped plans to take the Prevezon Holdings case to trial in May of this year, two months after President Trump fired Preet Bharara, the United States Attorney for the Southern District of New York, who had filed the charges. Veselnitskaya’s client’s firm agreed to pay $5,896,333.65 to settle out of court, with no admission of wrongdoing.

One of Veselnitskaya’s former colleagues, however, told The Intercept that her claim to have been working against the Magnitsky Law independently of the Russian government was untrue. According to her ex-colleague, who would only agree to speak on background, Veselnitskaya made no secret of the fact that she was in frequent contact with a senior Kremlin official, Russia’s Prosecutor General Yuri Chaika, during her work on the legal case.

Early Saturday morning in Moscow, The Wall Street Journal published a new interview with Veselnitskaya in which she admitted that she had coordinated her work to undermine the sanctions law with the Russian prosecutor’s office, including Prosecutor General Chaika. “I personally know the general prosecutor,” Veselnitskaya told The Journal. “In the course of my investigations, I shared information with him.”

Veselnitskaya also acknowledged to the newspaper that, at the time of her meeting in Trump Tower, she was representing Aras and Emin Agalarov, property developers who paid $20 million to stage the 2013 Miss Universe pageant in Moscow in conjunction with the American who then owned it, Donald Trump.

Her connection to both Chaika and the Agalarovs seems to explain how Veselnitskaya ended up at Trump Tower. The email exchange setting up the meeting began with a message sent to Donald Trump Jr. by Rob Goldstone, a publicist who works for the Agalarovs, in which he said that Aras Agalarov had been told by Russia’s senior law enforcement official, Chaika, that the Kremlin was eager to share Russian intelligence on Clinton with the Trump campaign.

Although Aras Agalarov tried to maintain that he barely knew Goldstone after the emails were made public this week, the publicist has worked for the family for years, as evidenced by images of him on the Instagram page of Agalarov’s wife Irina, during the 2013 pageant in Moscow, and a number of photographs he uploaded to his own Facebook page showing Agalarov’s son, Emin, with members of the Trump family, including Donald and Ivanka. 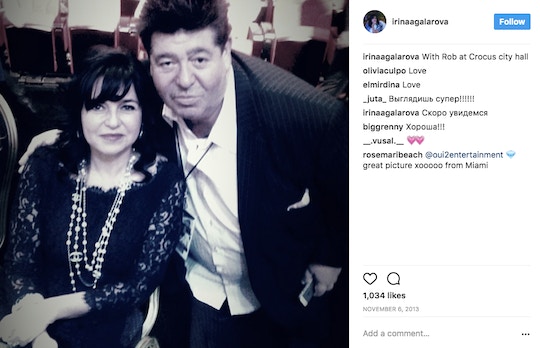 A screenshot from the Instagram page of Irina Agalarova, the wife of Donald Trump’s Russian business partner Aras Agalarov, showing her with Rob Goldstone, a British publicist, before the 2013 Miss Universe pageant in Moscow. A screenshot from the Facebook page of Rob Goldstone, a British publicist, showing his client, Emin Agalarov, with Donald and Ivanka Trump in 2014.

Chaika would also seem to have a personal interest in undoing the sanctions regime set in place by the Magnitsky Law, since, The New York Times reported in 2013, the U.S. government had “a list of 280 Russians compiled by Mr. Magnitsky’s family for possible sanctions, including senior officials like Yuri Y. Chaika, the country’s general prosecutor.”

Four days after they attended that meeting at Trump Tower, Veselnitskaya and Akhmetshin were in Washington to continue their campaign against the sanctions legislation, first by screening a documentary attacking Magnitsky himself, and then having dinner with Dana Rohrabacher, a Republican congressman from California who has worked to undercut the law.

The following day, both Veselnitskaya and Akhmetshin were seen at a House Foreign Affairs Committee hearing on Russia when Rohrabacher spoke in favor of closer relations with Russia.

Veselnitskaya, wearing a tan dress and frequently staring at her phone, sat directly behind Michael McFaul, the Obama administration’s former ambassador to Russia, and Akhmetshin was photographed at the side of the room. The day after that hearing, on June 15, 2016, the hacker who called himself Guccifer 2.0 posted opposition research and donor documents stolen from the servers of the Democratic National Committee. The U.S. intelligence community later concluded that hackers working for Russian intelligence were behind the theft of those documents and emails provided to WikiLeaks that served to undercut the Clinton campaign.