With a Michigan City Fighting Back, DHS Pushes a Controversial Deportation Forward

Lourdes Salazar-Bautista has been in the United States for 20 years. Her community is fighting to keep her. Lourdes Salazar-Bautista of Ann Arbor speaks at a press conference on ICE policies in Michigan on July 8, 2017.

In the face of intense community opposition, immigration officials are vowing to push ahead with plans to deport a 20-year Ann Arbor, Michigan, resident.

Immigration and Customs Enforcement has ordered Lourdes Salazar-Bautista, 49, to leave the country by August 2. The local community and elected officials have rallied in support of the mother of three, but ICE spokesperson Khaalid Walls told The Intercept that the agency will not back down.

“In a current exercise of discretion, the agency has allowed her to remain free from custody while timely finalizing her departure plans,” Walls wrote in a statement. “ICE focuses its enforcement resources on individuals who pose a threat to national security, public safety, and border security. However, as Secretary Kelly has made clear, ICE will not exempt classes or categories of removable aliens from potential enforcement. All of those in violation of the immigration laws may be subject to immigration arrest, detention, and, if found removable by final order, removal from the United States.”

“I’m not a threat to this country,” said Salazar-Bautista, choking back tears during a vigil at St. Mary Student Parish in Ann Arbor on Tuesday evening, broadcast on Facebook live. “I want to have a chance to continue guiding [my children] and educating them so they can reach the future, since I come from a very humble environment, I wasn’t able to reach.”

Salazar-Bautista immigrated to the United States in 1997. An immigration judge ordered her deportation in absentia in 1998. She says she never received the notices from the immigration court regarding her deportation, and she continued to live her life, raising her children and performing odd jobs — cooking, cleaning, and ironing for people in her community — until ICE picked her up in 2010. She was detained for 23 days, she said in the speech in Ann Arbor, and was released on the condition that her husband return to Mexico and that she check in annually with the immigration agency.

Immigration officials have routinely granted Salazar-Bautista a stay of removal since then, she says. But a new president was in office when she checked in with ICE in March, and she became one of many immigrants nationwide targeted for deportation after years of being considered low priorities for removal by the Obama administration. 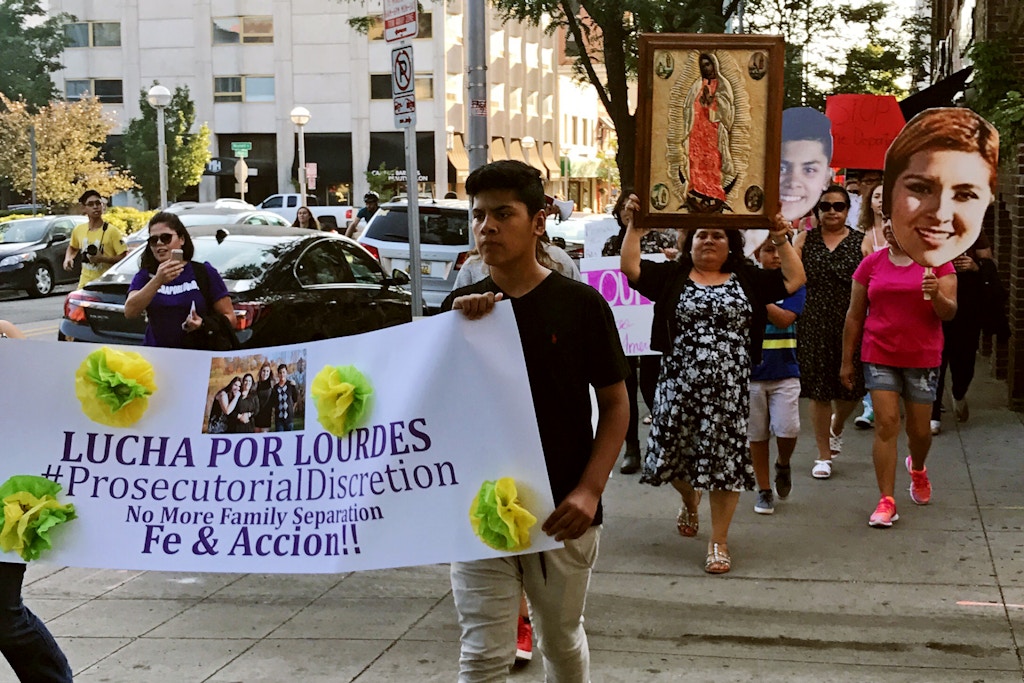 Protesters marched through the streets, demanding that Lourdes Salazar-Bautista’s deportation be stayed, in Ann Arbor, Mich., on July 18, 2017.

The president has broad authority over immigration enforcement efforts to remove individuals present in the country without legal status. Citing the Department of Homeland Security’s finite resources, President Barack Obama’s administration set priorities for removal in a 2014 memo. Former DHS Secretary Jeh Johnson laid out a three-part hierarchy, prioritizing the removal of national security threats, serious convicted criminals, and recent border crossers. The administration also listed factors to be considered for the exercise of prosecutorial discretion (a decision not to take action against an otherwise removable person), including strong community ties and length of time in the country.

That meant that immigration officials did not prioritize deporting people like Salazar-Bautista, who had no criminal history, contributed to her community, and had three American children. As such, ICE routinely granted stays of removal, temporary postponements that prevent DHS from executing a deportation.

In one of his first steps toward dismantling Obama’s legacy, President Donald Trump issued a January executive order on “enhancing public safety in the interior of the United States.” That document and a subsequent memo from DHS Secretary John Kelly explaining the directive rescinded all previous policy related to removal priorities. In effect, the White House chose to target a much broader group of unauthorized immigrants for removal and granted individual ICE agents with broad discretion over apprehending individuals suspected of being in violation of immigration law.

In other words, the new DHS enforcement guidelines make anyone present in the U.S. illegally equally fair game for deportation, including those charged, but not yet convicted, of “any criminal offense,” and those like Salazar-Bautista with final orders of removal.

“If they keep saying the focus is on the bad guys, the bad hombres, that’s not really the way it’s playing out,” she said. “The people who definitely feel at risk now are those with U.S. citizen kids, with families, with businesses. It’s really changed the level of fear.”

Salazar-Bautista bought one-way tickets to Mexico for herself and her children for August 1, according to Luz Meza, an organizer of the Ann Arbor campaign to support her, called Lucha Por Lourdes. Salazar-Bautista’s lawyer, David Newman, presented the tickets to ICE on Wednesday to show her intent to comply with the order, even as they continue to ask Detroit ICE Director Rebecca Adducci to stay the removal, Meza told The Intercept.

“Please, if someone can talk against these authorities to be able to get a change not just for me, for so many people who are in the same situation as I am,” Salazar-Bautista said in a Facebook video recording of the Tuesday vigil, acknowledging that her case is one of many.

The southeast Michigan immigrant community, like many across the country, is feeling the burn of the recent changes in immigration enforcement, Meza said.

“We’ve seen a lot of raids that are separating families and causing emotional harm to children,” she added. “We think in the long run this is going to have a very terrible impact on the kids who will grow up without their parents here.”

The case has become a rallying cry for local activists and elected officials at odds with the Trump administration’s immigration policies.

As of Friday, more than 8,000 people had signed a petition asking the Detroit ICE field office to stop the deportation. The Ann Arbor City Council on Monday unanimously passed a resolution asking ICE to stay Salazar-Bautista’s deportation, describing her as a “lawful, positive, contributing resident and taxpayer of Ann Arbor for close to 20 years.”

“Lourdes’s threatened deportation is a breach of faith and a disgrace,” said Ann Arbor Mayor Christopher Taylor on Tuesday in a speech delivered at a rally and broadcast on Facebook. “It won’t protect American jobs. All it will do is devastate an already separated family and impoverish a community that values her.”

Michigan delivered its electoral college votes to Trump, as he edged out Clinton by just over 10,000 votes. Clinton, however, annihilated Trump in the liberal enclave of Ann Arbor, outpacing him by nearly three to one.