Jeff Sessions Promises to Crack Down on Leaks, Threatening to Subpoena Reporters

“Sessions’s comments seem intended to have a chilling effect on journalism,” said Peter Sterne of the Freedom of the Press Foundation. 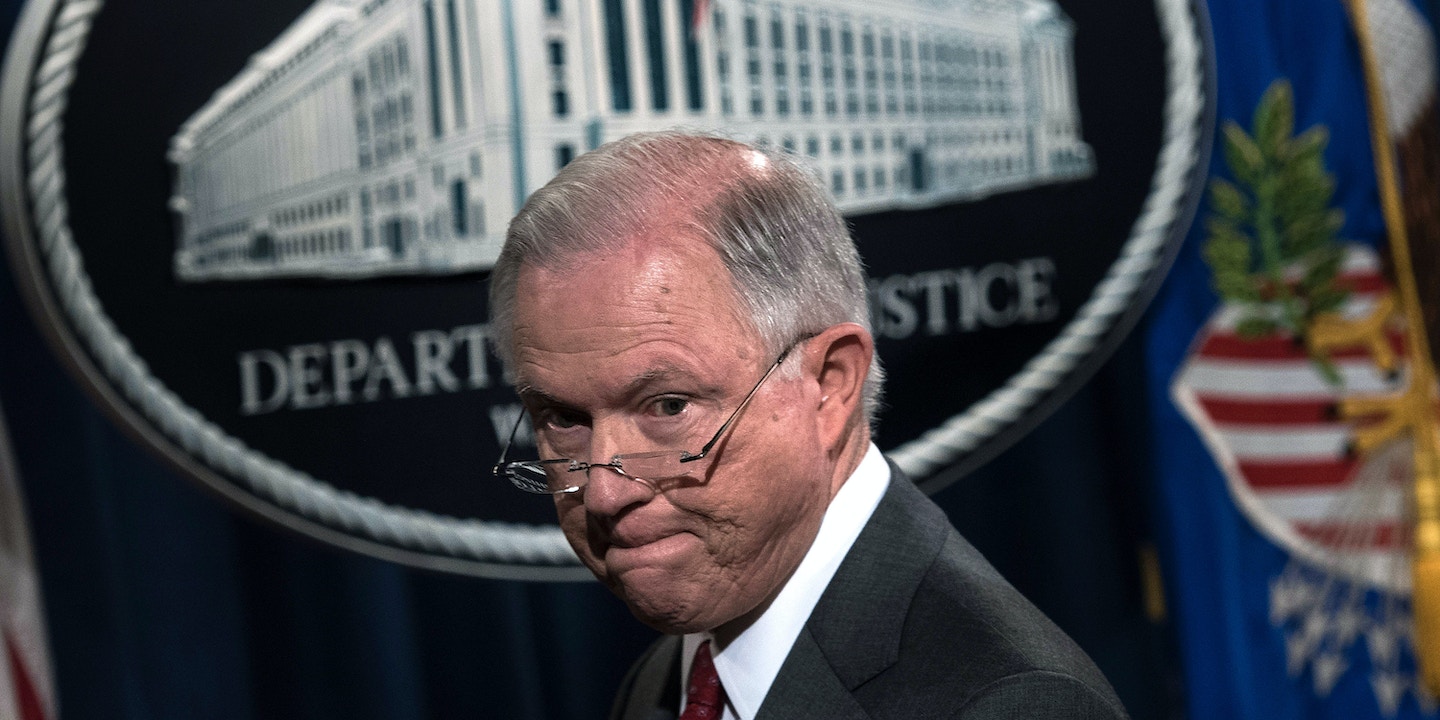 Attorney General Jeff Sessions announced a dramatic escalation in the U.S. government’s crackdown on leaks on Friday, threatening to subpoena news organizations for information about their sources even more frequently than the Obama administration.

Sessions said that the Justice Department was reviewing Obama-era policies that set limits on its ability to subpoena journalists.

“We respect the important role that the press plays, and will give them respect, but it is not unlimited,” said Sessions. “They cannot place lives at risk with impunity. We must balance the press’s role with protecting our national security, and the lives of those that serve in the intelligence community, the armed forces, and all law-abiding Americans.”

“The Department of Justice is explicitly threatening to haul journalists before grand juries and force them to testify about their confidential sources or face jail time,” said Peter Sterne, a senior reporter at the Freedom of the Press Foundation. “Sessions’s comments seem intended to have a chilling effect on journalism, by making reporters and their sources think twice before publishing information that the government does not like.”

“Our founders understood that democracy depends on an informed citizenry, and leaders can’t be trusted to disclose vital information that reflects poorly on themselves,” said Ben Wizner, a First Amendment lawyer with the ACLU, in a statement. “These first months of the Trump administration dramatically illustrate that point. Can anyone seriously argue that our country would be better off if the public received all of its information through official channels alone?”

Under Obama, subpoenas for information from journalists also alarmed press freedom advocates, who worried they could have a significant chilling effect on journalists’ ability to communicate with sources.

After the Associated Press reported on a failed Al Qaeda plot in Yemen, the Obama administration ordered sweeping subpoenas for an AP journalist’s phone records. And the Obama administration waged a six-year legal battle against New York Times investigative reporter James Risen, trying to force him to testify against a source before dropping the request at the last minute.

Risen would later write in the New York Times that “If Donald J. Trump decides as president to throw a whistle-blower in jail for trying to talk to a reporter, or gets the F.B.I. to spy on a journalist, he will have one man to thank for bequeathing him such expansive power: Barack Obama.”

“Referrals for investigations of classified leaks to the Department of Justice from our intelligence agencies have exploded,” said Sessions. “In the first six months of this administration, the Department of Justice has already received nearly as many criminal referrals involving unauthorized disclosures of classified information as we received in the previous three years combined.”

Sessions stated that the Justice Department had nearly tripled the number of active leak investigations it was conducting since the new administration took over in January.

Throughout American history and until the presidency of George W. Bush, criminal prosecutions for leaking classified information to the press were very rare. (The first one did not take place until the Eisenhower administration.) But they became much more common under President Obama, who waged an unprecedented crackdown on whistleblowers and leaks of classified information to the press. Obama used the World War I-era Espionage Act to prosecute leakers more than all of his predecessors combined, and dramatically built up the Justice Department’s infrastructure for going after people who shared information with the press.

Nevertheless, Sessions initiated a review of leak investigations when taking office, and said Friday that it found “too few referrals, too few investigations, with insufficient resources dedicated to them.”

Sessions announced that he was directing Deputy Attorney General Rod Rosenstein and FBI Director Christopher Wray to oversee all active leak investigations, and “actively monitor the progress of each and every case.”

Sessions did not take questions, and walked out of the press conference while members of the media shouted questions.

Top Photo: U.S. Attorney General Jeff Sessions speaks at the U.S. Department of Justice during an announcement about leaking of classified information on Aug. 4, 2017 in Washington.