Trump’s Opioid Commission Had Some Stunningly Good Recommendations. He Ignored Them for 80s Drug War Nostalgia. 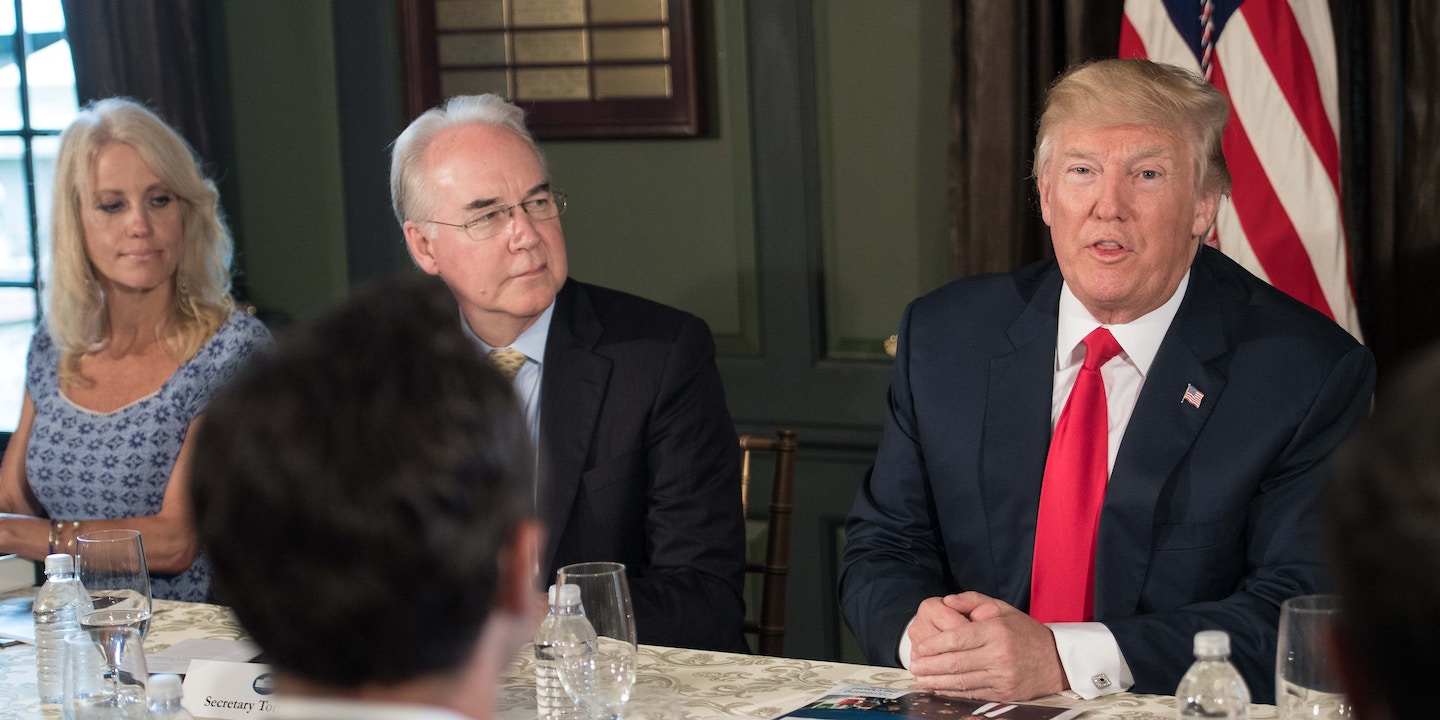 The Trump administration will not declare a public health emergency on the opioid epidemic, dismissing the top recommendation his own blue-ribbon commission called for a week ago. The commission argued such a declaration was critical to unlock emergency funding and expand treatment.

Health and Human Services Secretary Tom Price said at a Tuesday news conference that public health emergencies have traditionally been limited to specific areas of the country, like after Hurricane Sandy. “We believe … that the resources that we need, or the focus that we need to bring to bear to the opioid crisis at this point can be addressed without the declaration of an emergency,” Price said.

Some experts might react to Trump declining to invoke an emergency with a sigh of relief; lots of mischief could be accomplished with such expanded powers. But in remarks at a hastily arranged “major briefing,” the president seemed to respond to an epidemic that took more than 33,000 lives in 2015 (numbers that could be underreported, according to a new study) with a time warp to the failed policies of the 1980s.

“The best way to prevent drug addiction and overdose is to prevent people from abusing drugs in the first place,” Trump said from his golf club in Bedminster, New Jersey. “So if we can keep them from going on and maybe by talking to youth and telling them: ‘No good, really bad for you in every way.’”

If you were reminded of Nancy Reagan’s cameo on Diff’rent Strokes, you’re not alone. But “Just Say No” didn’t work as a policy 35 years ago — teenagers in programs, such as DARE, were as likely to use drugs as those who weren’t. It also initiated the school-to-prison pipeline with the creation of “drug-free schools” and other policies of overcriminalization. And it’s particularly useless for an opioid epidemic where adolescents age 12-17 represent a little more than one-tenth of those affected.

Even if a “Just Say No” policy could reduce to zero the number of new people who initiate heroin use, that would still leave a massive population of people living with substance use disorders, all of them at risk of overdose and death.

But the only other strategy Trump mentioned to fight opioid abuse was also a throwback: the tough-on-crime policies of the war on drugs. He lamented a decrease in federal drug prosecutions under former President Barack Obama, and lower sentences for dealers “that poison our communities.” He vowed “strong law enforcement” and to get “very, very tough” on the southern border and China, “where much of this comes in.”

This aligns with tough-on-crime policies endorsed by Attorney General Jeff Sessions. While Trump’s opioid commission did propose interdicting the entry of deadly fentanyl from China, this represented just one of their dozens of interim recommendations — none of which the president cited. Instead, he fell back on the drug war, which led to zooming incarceration rates and no letup in drug use during the Reagan years and beyond.

While Trump’s abstinence and supply-side approach would do nothing for the already-addicted population, his commission put forward some shockingly reasonable suggestions. The best that can be hoped for, perhaps, is that Trump won’t get around to reading the report, and will just ask that it be implemented.

Even without the emergency declaration, at least one of the commission’s recommendations would transform the U.S. approach to the crisis and give those in its grip a real chance at recovery. It’s an approach that was embraced by the surgeon general in a report in November and consistently by the Office of National Drug Control Policy under Obama.

The recommendation is a direct shot at a drug-treatment industry that still relies on strict abstinence as the only form of true recovery, rejecting any intervention by medication. The stigma associated with what’s known as medication-assisted treatment is leading to unnecessary death and suffering across the country. The commission’s recommendations are so well put, it’s worth including them in full:

Immediately establish and fund a federal incentive to enhance access to Medication-Assisted Treatment (MAT). Require that all modes of MAT are offered at every licensed MAT facility and that those decisions are based on what is best for the patient. Partner with the National Institutes of Health (NIH) and the industry to facilitate testing and development of new MAT treatments.

MAT has proven to reduce overdose deaths, retain persons in treatment, decrease use of heroin, reduce relapse, and prevent spread of infectious disease. Expansion of MAT availability for qualified individuals and for short- or long-term treatment is an essential DRAFT 5 component of treatment services. Yet approximately 10 percent of conventional drug treatment facilities in the United States provide MAT for opioid use disorder.

Individuals seeking SUD treatment, and even those currently enrolled in a treatment system, often find barriers to using MAT as a component of their treatment. Particularly for populations with opioid use disorders (OUDs) involved in the criminal justice system, there is often inadequate access to FDA-approved medications that are proven to improve outcomes as part of a full continuum of care. Multiple studies have shown that individuals receiving MAT during and after incarceration have lower mortality risk, remain in treatment longer, have fewer positive drug screens, and have lower rates of recidivism than other individuals with OUDs that do not receive MAT. The DOJ, in consultation with HHS and ONDCP, should be directed to increase the use of MAT for OUDs in these correctional settings.

In addition, the Centers for Medicare & Medicaid Services (CMS) should require all federally-qualified health centers (FQHCs) to mandate that their staff physicians, physician assistants, and nurse practitioners possess waivers to prescribe buprenorphine.

There are several barriers to the use of MAT, including a prevalent belief that use of MAT does not constitute true recovery or sobriety. The Federal Government, as a major purchaser of health care services, has a tremendous opportunity to increase the availability of MAT for individuals with OUDs. For example, across the Veterans Administration (VA) and Indian Health Services, there is a lack of providers able to prescribe/administer MAT. For Medicare patients, the Part B physician benefit does not cover methadone treatment and the Part D pharmaceutical benefit does not cover it either, as it is administered by a medical professional. CMS should send a letter to state health officials requesting that state Medicaid programs cover all FDA-approved MAT drugs for OUD.

Additionally, all FDA-approved MAT should be offered by authorized providers, not just one or two of these approved options. These decisions of which (if any) MAT to be used must be based upon what is best for the patient, not what is best for the provider. This can be mandated by the Executive Branch.

Finally, we urge you to instruct the NIH to begin to immediately work with the pharmaceutical industry in two areas; the development of additional MAT options and the development of new, non-opioid pain relievers based on research to clarify the biology of pain. The nation needs more options to treat those already addicted and can help to prevent addiction in the first place by avoiding the prescription of opioids. The NIH is best positioned, in our opinion, to lead this effort with industry partners.

But neither Trump nor Price mentioned MAT yesterday. In fact, Price attacked MAT as “substituting one opioid for another” in a listening session earlier this summer, reflecting the very ignorance the commission sought to counter, and drawing a rebuke from hundreds of public health practitioners.

Trump and his team also had few words for the multiple “poisoners of communities” in the pharmaceutical supply chain who started the flow to patients. This is seen as a primary gateway to substance abuse; Trump’s own FDA commissioner said last month, “most people who become addicted to opioids are medically addicted.” (That’s sloppy wording; plenty of patients who are dependent on pain medication are not addicted any more than dialysis patients are addicted to their treatment.)

While several states, most recently New Hampshire, have sued drug manufacturers and suppliers for enabling the crisis by downplaying the risks of addiction from the products they aggressively marketed, Price said the administration has not taken a position on the cases. “Some have analogized it to the tobacco issue and the master settlement,” Price added, citing an agreement between cigarette-makers and 46 states in 1998. “Whether there is something that’s analogous to that, I don’t know.”

In other words, for the Trump administration, the perps are on street corners but not in Big Pharma’s corporate boardrooms.

Price did vow that the administration would mount a comprehensive strategy to deal with the epidemic. He cited making the overdose-reversal medication naloxone “as present as needed and possible anywhere across the country,” boosting research on an addiction vaccine at the National Institutes of Health, and ensuring that doctors are not over-prescribing opioid painkillers. White House Counselor Kellyanne Conway highlighted better education about pain medication for medical professionals.

All of these mirror recommendations from the commission.

However, the lack of concrete policy announcements from Trump, despite widespread consensus going back to last year’s surgeon general report on what can be done, has disappointed public health experts. So has the Trump administration’s more prominent policy on opioids thus far: slashing public health budgets and attempting to gut Medicaid, which pays for the treatment of a large chunk of opioid abusers.

Asked whether he still wants to cut Medicaid given its importance in fighting the epidemic, Price said, “Nobody is interested in cutting Medicaid.” Of course, in June Price insisted that nearly $1 trillion in Medicaid reductions proposed in the Senate health care bill is not a cut.

The moment that made the most news during Trump’s much-hyped opioid briefing was, instead, an answer he gave to a question about North Korea.