Is the Queer Brigade Fighting ISIS in Syria a Force for Liberation or Alienation?

Leftist foreign fighters are drawn to Rojava in Kurdish Syria for its radical democratic politics and gender equality. But LGBTQ rights have a ways to go. 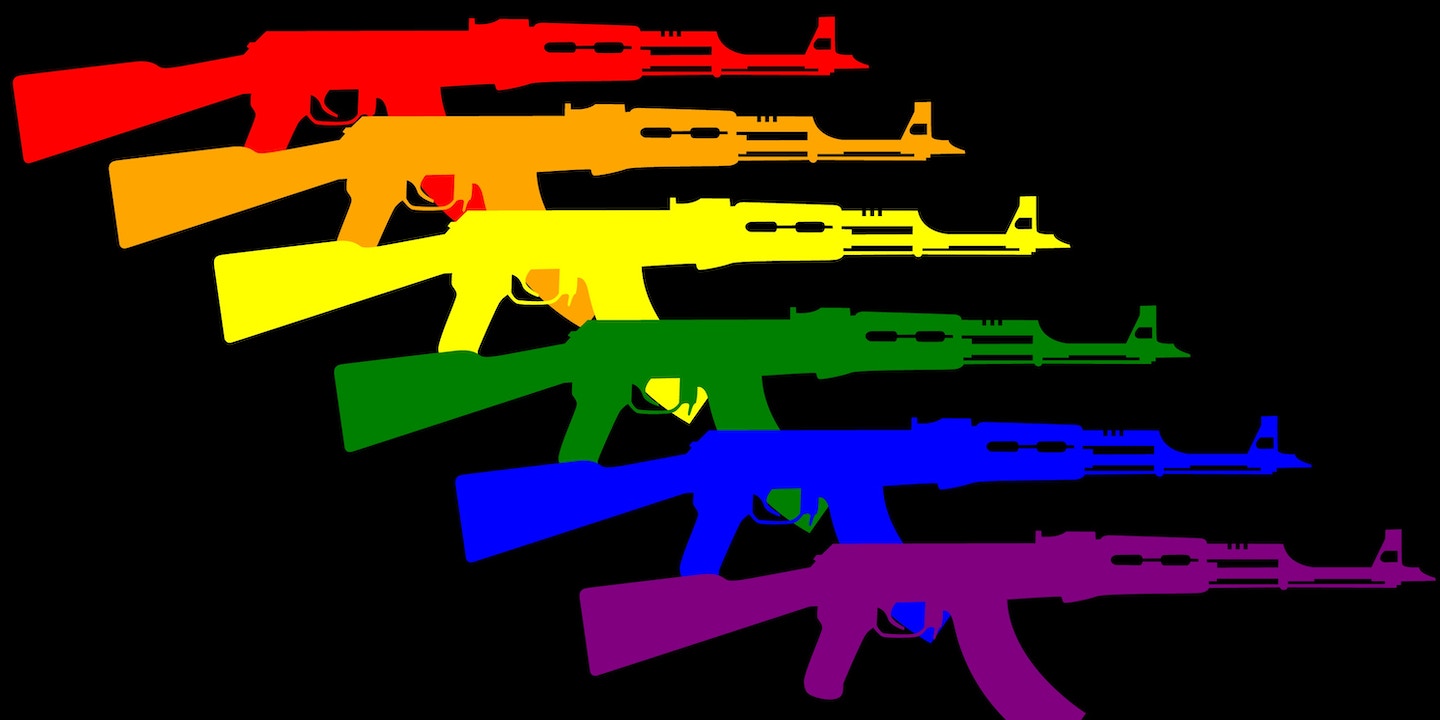 Last month, a rag-tag group of foreign fighters announced the creation of the first LGBTQ brigade fighting against the Islamic State in Syria. Their name? The Queer Insurrection and Liberation Army, or TQILA (yes, pronounced “tequila”).

“TQILA’s members have watched in horror as fascist and extremist forces around the world attacked the Queer community and murdered countless of our community members,” their statement reads, going on to say that they could not “idly watch” as ISIS threw gay men off buildings in the Middle East, or influenced the LGBTQ nightclub shooting in Florida.

“It is this necessity and desire to strengthen the gains of the women’s revolution, while advancing the queer struggle, that has motivated the Queer comrades of the IRPGF to form TQILA.”

TQILA is a small unit within the International Revolutionary People’s Guerrilla Forces — a battalion of self-identified anarchist foreign fighters who traveled to support the Kurdish People’s Protection Units (YPG) in their fight against ISIS. While some have questioned whether TQILA actually exists, the group has released several photos ostensibly from Raqqa, including one sending a message in solidarity with the Stockholm Pride Parade in Sweden. (A spokesperson for the brigade did not respond to questions from The Intercept.)

Syrian Democratic Forces (SDF) denied their affiliation with the foreign brigade, but TQILA quickly became an internet sensation. Newsweek and the Independent praised the LGBTQ battalion for their courage and the YPG for their inclusive politics. Twitter ran with it, using the news of the LGBTQ battalion to condemn ISIS and slam Donald Trump’s recent ban on transgender people serving in the U.S. military.

But while TQILA’s rainbow flags and catchy banners may have been clickbait for certain parts of left Twitter, other activists and people with experience on the ground argue that masked foreign fighters are not the way to advance the rights of LGBTQ people in the war-torn region. Rojava, a politically autonomous region in the Kurdish region of northern Syria, has attracted leftists from around the world thanks to its radical experiments in participatory democracy and commitment to women’s equality. But LGBTQ activists say there is a long way to go.

“I was pissed off when I saw these images,” said Zoza, a 28-year-old Syrian-Kurdish transgender woman who grew up in Rojava. She was resettled as a refugee in Toronto last year.

“Rojava never was, and never will be, a welcoming place for queer people,” said Zoza, who goes by one name. Technically being LGBT isn’t criminalized in Rojava, giving it a reputation as one of the most tolerant regions of the Middle East. But, as Zoza put it, “there’s no law against harassing LGBT people either.” During her time in Syria, she said she was harassed and threatened by both ISIS and Kurdish fighters alike.

“I wasn’t able to freely live as myself without facing enormous danger,” she said. Many of Zoza’s queer acquaintances in Rojava were able to move freely — so long as they remained closeted. But in her case, living at the time as an effeminate boy, keeping her identity hidden was never an option.

Many foreign fighters travel to Syria to join the so-called Rojava Revolution, a movement that began when the Syrian regime withdrew from Rojava in 2011, leaving it to the control of the Kurdish political party, PYD. The PYD went on to set up a radical system of participatory democracy and, in addition to advancing the cause for Kurdish liberation, Rojava has become known for promoting women’s rights through women-led political councils and leading conversations on minority rights. 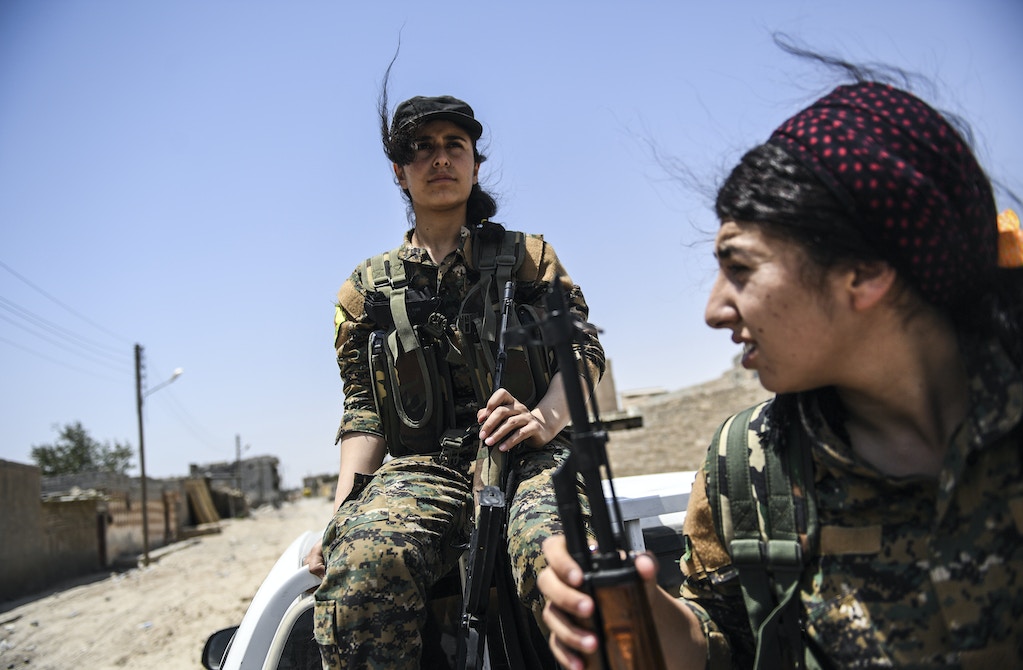 Members of the Women’s Protection Units arrive on the front line on the eastern outskirts of Raqqa on July 18, 2017, during the ongoing offensive by the Syrian Democratic Forces to retake the city from Islamic State fighters.

In addition to being a part of this experiment, the military arms of the PYD — the YPG and Women’s Protection Units (YPJ) — have been on the front lines of the war against ISIS. While many of their foreign fighters in the past were ex-military types focused on “finishing the job,” the YPG has now shifted to recruiting leftist-anarchist types — like the TQILA fighters — who more closely align with their political ideals.

While many in the Western left idealize Rojava as an anti-patriarchy, anti-capitalist socialist utopia, some visitors find themselves questioning how deep this liberation goes. As author and activist Rahila Gupta observed, while there is extensive female participation in the government and military, the majority of housework is also left to women. Gupta also noted that LGBTQ and minority rights are often lumped in with women’s rights and Kurdish liberation as Rojava’s alleged priorities, but sexual relations of any kind are frowned upon as distractions from the revolution, and often met with shaming and harassment.

Zoza argues that the new arrivals are being taken in. “None of these foreign fighters understand that Rojava and the YPG are not who they claim to be,” she said. “As a Syrian-Kurdish trans woman, why should I be fed this propaganda that it is this place that it is not?”

One of those fighters, an American who goes by the Kurdish nom du guerre Jêhat Birûsk, acknowledged in an interview conducted via Twitter that the situation is complicated.

A self-identified queer anarchist, Birûsk, like many of his fellow leftist recruits, participated in movements like Occupy Wall Street while living in the United States. However, after being surrounded by what he describes as “postmodern critical theory” in his daily political life, he was intrigued by the YPG’s militancy in fighting for the ideals of the Rojava Revolution. So he packed his bags to travel to Iraq and then Syria to study Kurdish, participate in a month of basic training, and then support the YPG offensive against ISIS in Raqqa — all in hopes of later participating in the democratic experiment.

“How could I not join?” Birûsk said. “I knew that if I really believed the things that I thought I believed, I didn’t have much of a choice.”

Still, Birûsk admitted, “There is a lot of queer invisibility here.” He isn’t openly gay within his unit — YPG fighters are required to take a vow of celibacy, which makes being out a “non-starter,” in his words — but he is fairly certain that his sexuality would be more easily accepted because he is a foreigner. A local LGBTQ-identified fighter might have a different experience, he said. So while he agreed with the radical “bash-back” language of the TQILA brigade on a personal level, he said he doesn’t feel that it is the right approach for LGBTQ inclusion in Rojava, or the Middle East, at this time.

“It isn’t to say that everyone in Syria or the Middle East or Rojava are homophobes,” he explained. But in addition to facing violence from ISIS, queer people in Syria and throughout the Middle East are routinely detained or harassed by security forces, and are often shunned by their own families. If they can, many remain closeted or lead double lives in order to survive.

In that context, he said, TQILA’s brash style could make the brigade more a force of alienation than liberation.

Birûsk still believes that LGBTQ foreign fighters could have a positive impact by showing solidarity with local LGBTQ individuals and challenging homophobia with more cultural awareness.

“So maybe we could approach these sensitivities differently,” he said. “But without having to ask for permission to exist, either.”