Trump’s Muslim ban takes on another form: making it difficult for Pakistani physicians to come to the United States and treat those most in need of help. 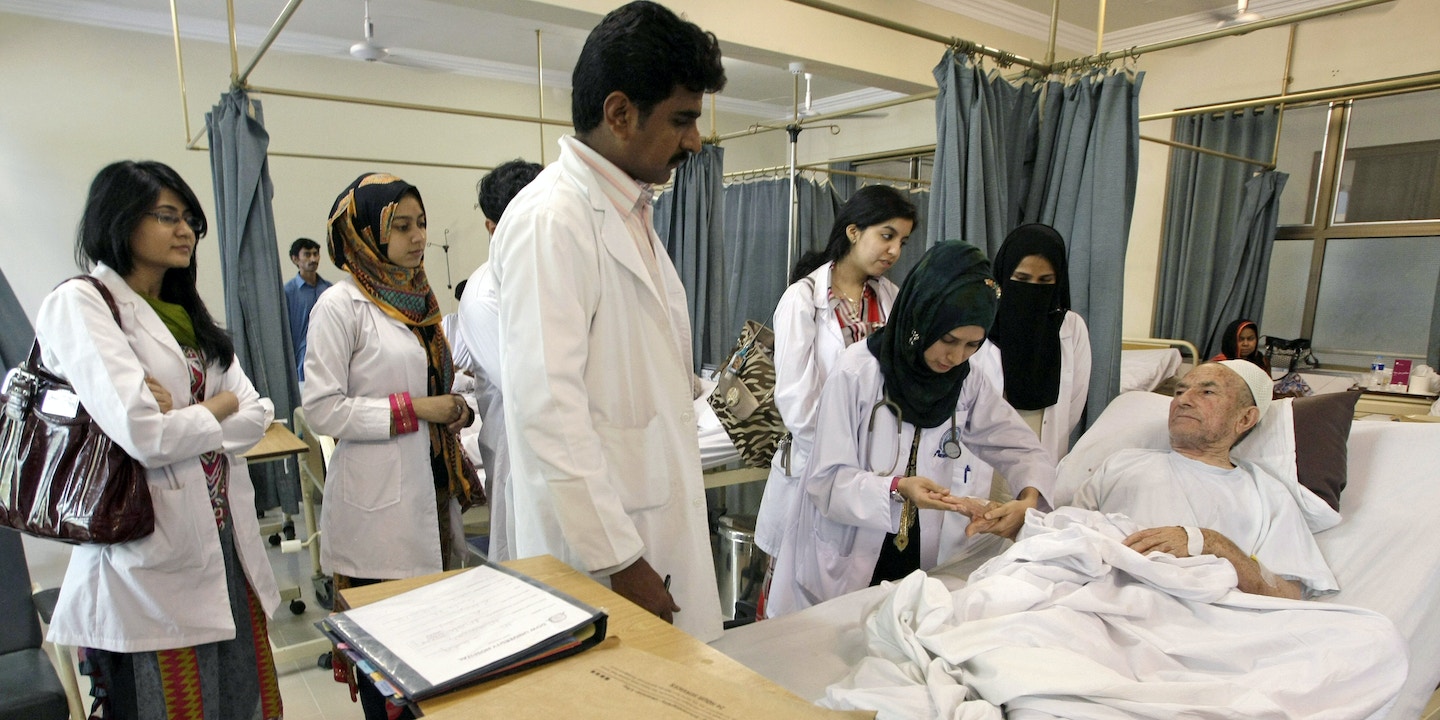 Every March, doctors across the United States and the world eagerly await “Match Day” — the day they find out what residency, internship, or fellowship program they’ve been matched with. By that point, residency candidates have completed medical school and passed a series of rigorous qualifying exams. For those who are not American — about a quarter of all doctors in the U.S. are foreign-born — there’s one additional step: securing a J-1 visa, a nonimmigrant exchange visa conditioned on an individual’s return to their home country for at least two years at the conclusion of the program.

In the weeks following the March 17 match, dozens of Pakistani physicians had their J-1 applications denied in Islamabad and Karachi, said Shahzad Iqbal, a Pakistani-American physician in New York.

Jan Pederson has spent the last 30 years of her legal career representing foreign-born physicians coming to the U.S. for residency or fellowship programs. It’s an unheralded but essential line of work, because without foreign doctors, the U.S. healthcare system would simply collapse, with the pain felt most acutely in rural areas. U.S. medical schools don’t produce anywhere near enough graduates to meet the needs of the country, particularly in places where people are reluctant to move to.

Like any legal practice, Pederson’s hasn’t always been smooth. Every so often, a client’s visa application is denied. It happens. In the years following the Sept. 11 terror attacks, doctors from countries, such as Iran and Syria, saw their applications get stuck in administrative processing until U.S. officials could affirmatively say the physicians posed no national security threat, she said.

But this spring, weeks after President Donald Trump issued a revised version of an executive order restricting immigration from six Muslim-majority countries, Pederson saw the same thing Iqbal did — what she called an “epidemic of Pakistani visa denials.”

Advocates say there is no way to separate the attempted Pakistani physician ban from the so-called Muslim ban and other Trump administration immigration policies.

“I think it’s a confluence of factors” that caused the visa denials, Pederson said. “It would be hard to escape the conclusion” that there is a correlation between the visa denials and the president’s anti-immigration rhetoric and policies.

“This year, we had about 34 J-1 refusals that were reported to us. This is kind of a historic number,” said Iqbal, who chairs the Committee on Young Physicians, which is a part of the Association of Physicians of Pakistani Descent of North America. APPNA only knows about denials that rejected applicants reported to them, so it may be just the tip of the iceberg. Many reapplied, starting from scratch, and were successful, but started their programs late.

APPNA has lobbied on behalf of Pakistani doctors hoping to train in the United States since 2003, Iqbal said. Heightened post-9/11 security measures meant that many visa applications were held up in administrative processing, but “it never happened before that there was a mass number of denials,” he said. “Before, there were security clearances, and people were placed in security clearance for six months to two years.”

For the last five years, APPNA received reports of, at most, one or two physicians whose visa applications were denied, and usually it was because of an issue with an applicant’s immigration history.

This is concerning, Iqbal said, since Pakistan is one of the top suppliers of foreign doctors to the U.S. In 2015, 12,125 doctors of Pakistani descent were practicing medicine in the U.S., second only to India’s 46,137 doctors, according to the U.S. Organization for Economic Cooperation and Development.

Of the 2,766 international medical graduates who received J-1 visas for the first time for the 2017-2018 training year, 257 were from Pakistan, according to the Educational Commission for Foreign Medical Graduates, which oversees international medical graduates in the U.S. workforce. Among the 34 doctors who reported visa denials to APPNA this year, 30 of them were ultimately granted visas after reapplying multiple times or had their applications sent into administrative processing, Iqbal said. Two doctors’ visas remain denied, and another two lost their spots in residency programs, which started on July 1 in Massachusetts and New York, and are therefore no longer eligible for visas. (Iqbal said the program directors at those hospitals gave APPNA a verbal promise that the physicians’ seats would be saved for next year, but he declined to name them out of fear of jeopardizing those agreements.)

“There have been no significant changes specific to the J-1 visa application process this year,” the State Department told The Intercept in a statement. “Every visa applicant undergoes extensive security screening.”

What happened to the Pakistani doctors is likely an indirect consequence of the White House’s immigration policies, such as increased vetting, said Matthew Shick, director of government relations and regulatory affairs at the Association of American Medical Colleges.

“[Pakistan] is not on the travel ban list, but in general there’s a lot of fear in the Pakistani community over changes that have been happening,” said Greg Siskind, a Memphis-based immigration lawyer and member of the International Medical Graduate Taskforce, an organization of lawyers who work with international medical graduates who want to work in the U.S.

This year’s batch of Pakistani physicians are completing residencies around the country, in states such as Georgia, Kentucky, Minnesota, New York, and New Jersey, Iqbal said. Many of them matched to hospitals in medically underserved communities. “The foreign graduates get into programs where Americans don’t want to go,” he said.

After completing their residencies, many international medical graduates seek a waiver of the requirement that they return home for two years under a federal program known as the Conrad 30. In exchange, they pledge to work for three years in an area designated by the federal government as having a shortage of health professionals or being medically underserved. Participation in the Conrad 30 program creates a pathway to citizenship and as a result, many foreign-born doctors launch their careers serving rural communities and economically disadvantaged populations.

Small-town America has relied on foreign-born doctors for years, but, like the rest of the country, the demand for doctors exceeds the supply. By 2025, the U.S. will have a physician shortfall of between 61,700 and 94,700 physicians, according to a 2016 AAMC report. The dearth of doctors is one reason to be concerned about the Pakistani doctors’ visa denials, Shick said. “As we face shortages, denying any physician that is accepted into a residency program is a bit shortsighted,” he said.

In denying the doctors’ visa applications, American diplomatic outposts in Pakistan cited a broad provision of the immigration code that says non-citizens are not entitled to nonimmigrant visas unless they overcome a presumption of immigrant intent, Pederson said. In other words, applicants must prove to the satisfaction of the consular officer that they are not intending to fully emigrate, a task often accomplished by showing family, employment, or financial ties to the applicant’s home country. The consular officer’s discretionary decision cannot be appealed (though they can start from scratch and reapply, as many did), but it makes little sense to Pederson that dozens of applications were denied this spring.

Both Pederson and Shick said they are not aware of a group other than Pakistani physicians that saw a significant increase in J-1 visa denials this year, although Shick said his group is still sorting through the data.

“It’s very anomalous in this situation since all of them virtually had been issued B1/B2 visas [another class of temporary, nonimmigrant visas] for lawful purposes such as taking the [United States Medical Licensing Examination], attending in-person residency interviews, and undertaking observerships,” Pederson said.

Although most of the doctors had their visas approved after reapplying, Iqbal fears what happened this year will impact Pakistani physicians’ prospects in years to come.

“It’s scary for medical graduates because it is a ripple effect,” he said. “Now, for next year, the program directors will be reluctant to take the Pakistani physicians there. They won’t get matched.”

Top photo: A Pakistani doctor examines a patient at the Dow Medical Institute for Health in Karachi, Pakistan in 2013.