If you know where to look, you can spot them along the roadsides as you drive through the hilly farmland of Lancaster County, Pennsylvania. Short wooden stakes stand exactly 50 feet apart, topped with orange tape. The markers seem benign, but for many Lancaster residents, the threat they represent is anything but: These poles mark the proposed path of the Atlantic Sunrise natural gas pipeline.

The Atlantic Sunrise project is a $3 billion expansion of natural gas giant Williams’s Transco pipeline network. Building it will require burying a 42-inch pipe under miles of Amish country, below farms and rivers, in the face of opposition from many Lancaster residents.

Many of the pipeline’s opponents are already in open rebellion. A group of nuns who own land on the proposed pipeline’s path refused to grant Williams an easement on their property. Williams threatened to use eminent domain, and now the nuns from the Adorers of the Blood of Christ have sued the Federal Energy Regulatory Commission in U.S. District Court. They argue the pipeline’s construction contradicts their deeply held religious beliefs and that using eminent domain to take their land is a violation of their First Amendment rights to freedom of religion. 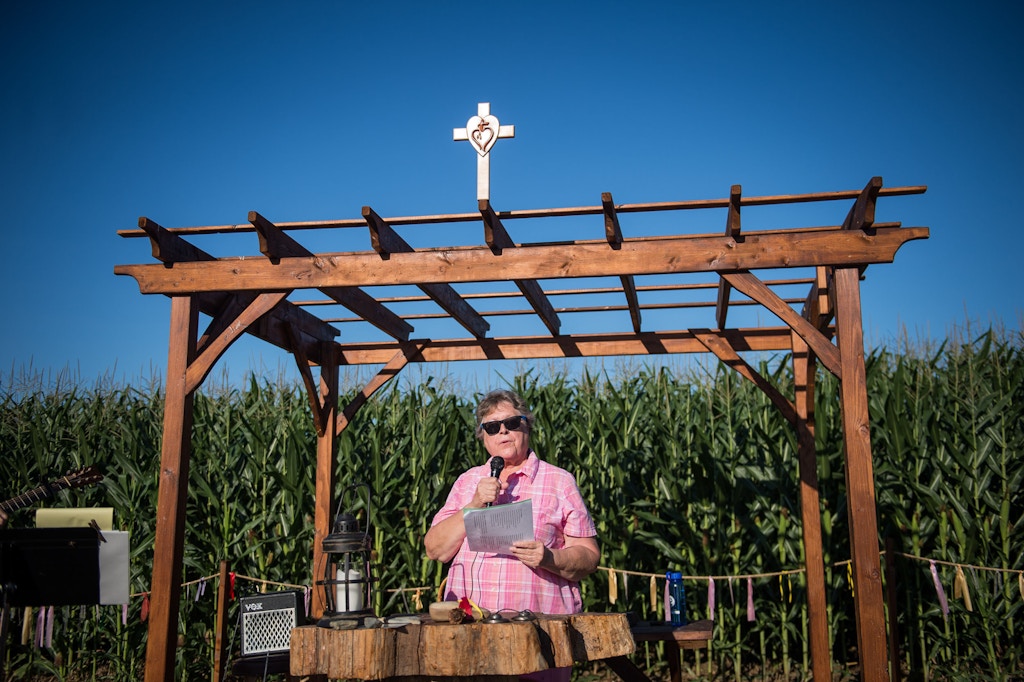 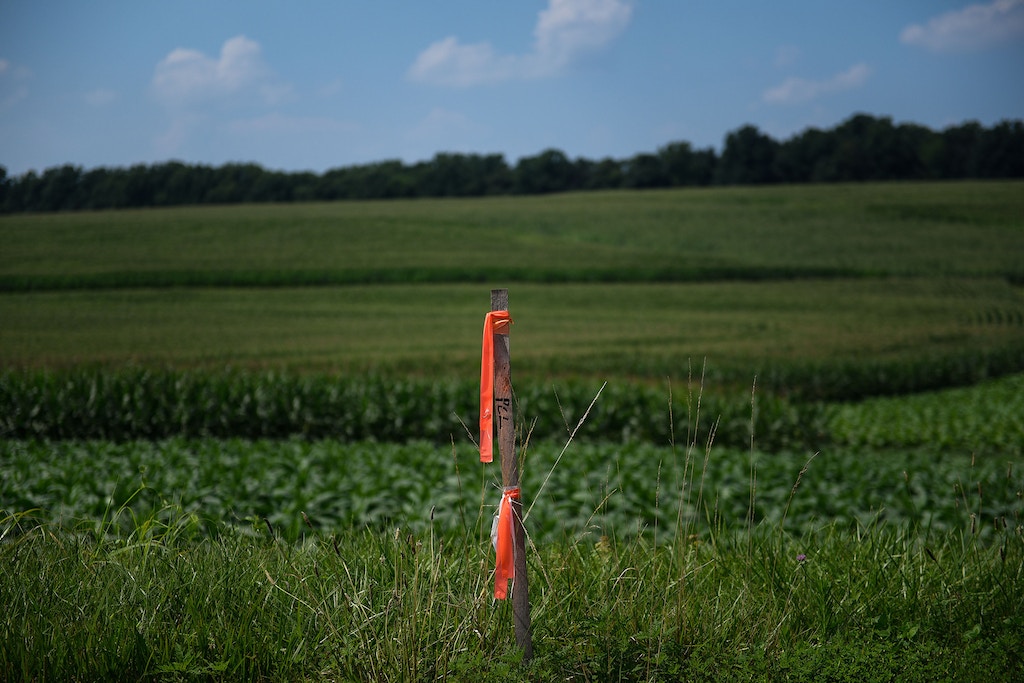 Top: Sister Bernice Klostermann reads a prayer during a service at the small chapel built in the path of the proposed Atlantic Sunrise natural gas pipeline by the Adorers of the Blood of Christ, a group of Catholic nuns that supports environmental justice, in Columbia, Pa., July 30, 2017. Bottom: A post demarcating the proposed 50-foot-wide easement for the planned Atlantic Sunrise natural gas pipeline near Buck, Pa., on July 17, 2017.

The Adorers, a small order of Catholic sisters with a commitment to social and environmental justice, first established themselves in the small farming community of Columbia, Pennsylvania, in 1925. There they founded St. Anne’s, a home for the elderly. More recently, they purchased a small forest preserve near their original ministry in Illinois. Beyond the immediate disruption to their land that the pipeline would inflict, the sisters argue that it also promotes fracking, which they consider harmful to the environment.

“Fracking ruins the ground, ruins waterways, ruins the air,” said Sister Bernice Klostermann. “There are future generations coming. We need to re-examine our values and principles.” Top: The Conestoga River flows near the site where Williams plans to extract water during the construction of the Atlantic Sunrise pipeline in Millersville, Pa., on Aug. 5, 2017. Bottom: Lancaster Against Pipelines activists look at maps showing the path of the proposed Atlantic Sunrise pipeline during a strategy planning session at a farm next to one of Williams’s planned water-extraction sites on the Conestoga River, in Millersville on Aug. 5.

Williams, for its part, says the nuns willingly chose not to participate in the Federal Energy Regulatory Commission’s review and that the cornfield in question will remain the Adorer’s property and continue to be farmable after the pipeline is installed. They also accuse the Adorers of a double standard because they use natural gas to heat some of their buildings and electricity from power plants that burn natural gas.

“We find it ironic that the Adorers would challenge the value of natural gas infrastructure in the lawsuit, while at the same time promoting the availability and use of natural gas at their St. Anne’s Retirement Community,” Williams said in a written statement.

Mindy Roye owns a trailer park across the street from the Adorers chapel and adjacent to the proposed easement. She is concerned that the drilling will contaminate her drinking water wells. In neighboring Chester County, a number of wells were contaminated during drilling to install Sunoco’s Mariner East 2 natural gas pipeline. According to Roye, she was told it would cost over $25,000 to connect to the municipal water system if her wells are damaged. She said she isn’t in total opposition to the pipeline, but feels that Williams has railroaded the local community and its concerns, especially those residents who own land adjacent to the proposed path. “Instead of coming in and just taking people’s land,” she said, “why don’t say, ‘We’ll pay for hooking you up to city water,’ and then negotiate the use of the land?”

Williams maintains that it went through a lengthy two-year review process, and more than 99 percent of affected landowners have settled with the company, while risks to the environment are minimal.

Lancaster Against Pipelines, a protest group created in 2014, finds any risk to the environment unacceptable. Earlier this year, LAP established an encampment on a plot of land that will be a major drilling site to allow the pipeline to pass under the Conestoga River. They constructed a 25-foot-tall structure directly in the pipeline right of way, which Williams considered a “safety hazard.” Williams spent millions of dollars to buy the entire property from the landowners just to force the protesters off the land.

Undeterred, LAP dispersed to a number of other properties around the area and continues to carry out civil disobedience trainings to prepare for resistance to construction efforts when they begin. 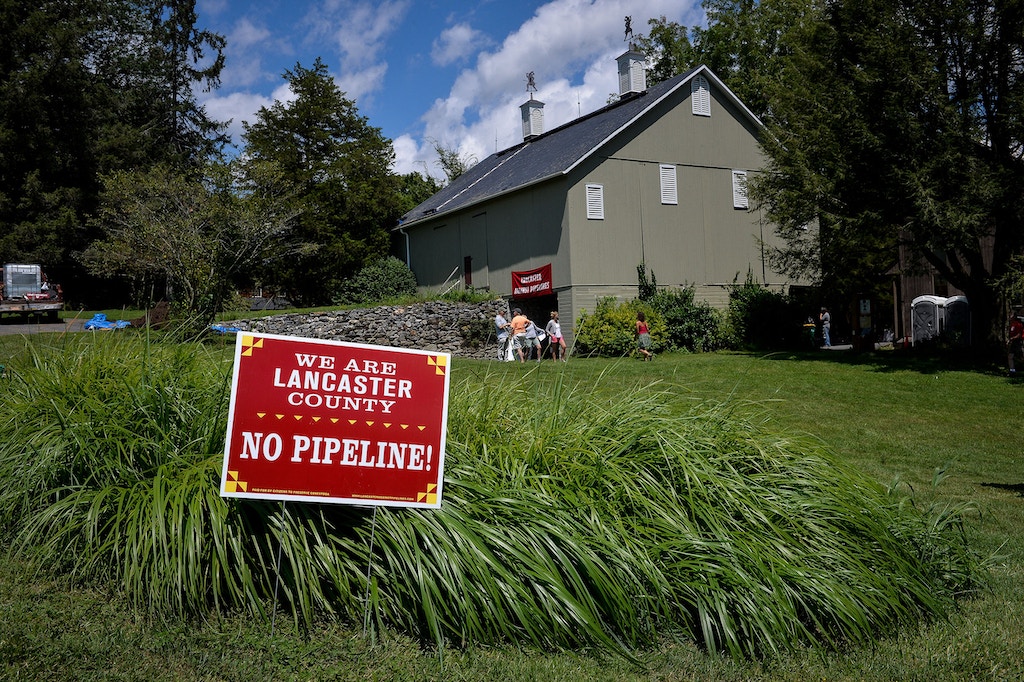 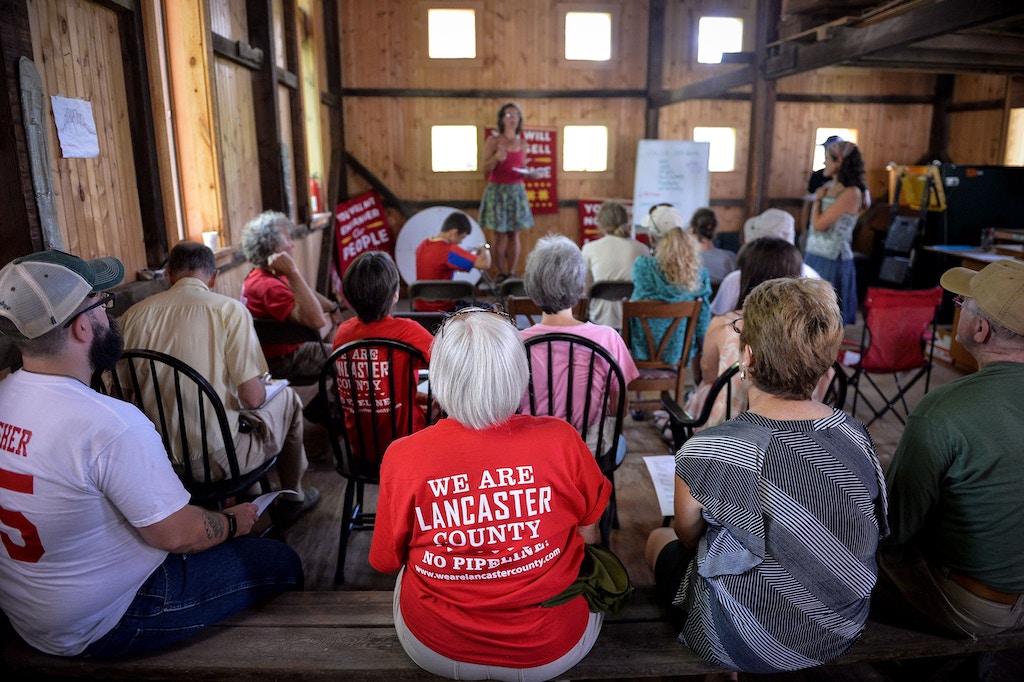 Top: A sign condemning the proposed Atlantic Sunrise pipeline at a farm next to one of Williams’s planned water-extraction sites on the Conestoga River, in Millersville, Pa., Aug. 5, 2017. Bottom: Lancaster Against Pipelines activists gather for a planning session at the farm .

“We plan on getting arrested,” said Malinda Clatterbuck, a minister and founder of Lancaster Against Pipelines. It’s not that she wants to be arrested, she said, but rather she sees no other choice.

Industry-friendly legislators in the state have introduced new bills in response to the threat of civil disobedience. Citing law enforcement spending associated with the Dakota Access Pipeline protests, Scott Martin, the state senator for much of Lancaster County, introduced a bill last week that would make Pennsylvania demonstrators liable for “public safety response costs” if they’re convicted of misdemeanors or felonies. The legislation’s definition of “demonstration” includes “vigils or religious services” that have the primary purpose of “expression of views or grievances” and “draw a crowd or onlookers.”

“The laws are unjust and the law will come out against us because we don’t have the legal right to protect the heath and safety of our communities,” Clatterbuck said. “But the industry has the right to come and exploit us and put us in danger.”

On a recent Sunday afternoon, a few dozen activists gathered for a planning session at one of these farms next to the laconic Conestoga River, from which the state granted Williams permission to draw water for use in horizontal drilling and hydrostatic testing.

The activists, who ranged in age from early 20s to mid-70s, gathered around maps showing the pipeline’s route and proposed drilling locations, trying to determine the best tactics to disrupt or block construction when it begins. Ideas ranged from locking themselves to access gates, to prayer vigils and protest marches.

“While there may be a lockdown of some sort, there’s also going to be a beautiful ceremony happening in that same space, so that way the media can’t paint the picture that we are the bad guys,” said Dylan Carney, 21, who traveled from New Hampshire to join LAP for the summer. The Adorers of the Blood of Christ, a group of Catholic nuns that supports environmental justice, built a small chapel in the path of the proposed Atlantic Sunrise natural gas pipeline on their land in Columbia, Pa., July 30, 2017.

The Adorers also built a small chapel in their field directly in the pipeline’s path. They plan to hold a prayer service there when construction begins. Although she worries what might happen to the elderly residents at St. Anne’s in her absence, Klostermann is also ready to be arrested, if necessary.

“So what if I get arrested?” she asked. “I could be put in jail, but so many others have gone to jail for doing what they believed in. So, who am I to say I couldn’t handle it? But I pray to God every day that we do win this and they don’t take this land from us.”

Top photo: Shadows approach a farm that lies in the path of the proposed Atlantic Sunrise natural gas pipeline near Buck, Pa., on July 17, 2017.