A Trump supporter, who insists the president is not racist, is a former member of a violent cult and holds confounding beliefs about a global race war. 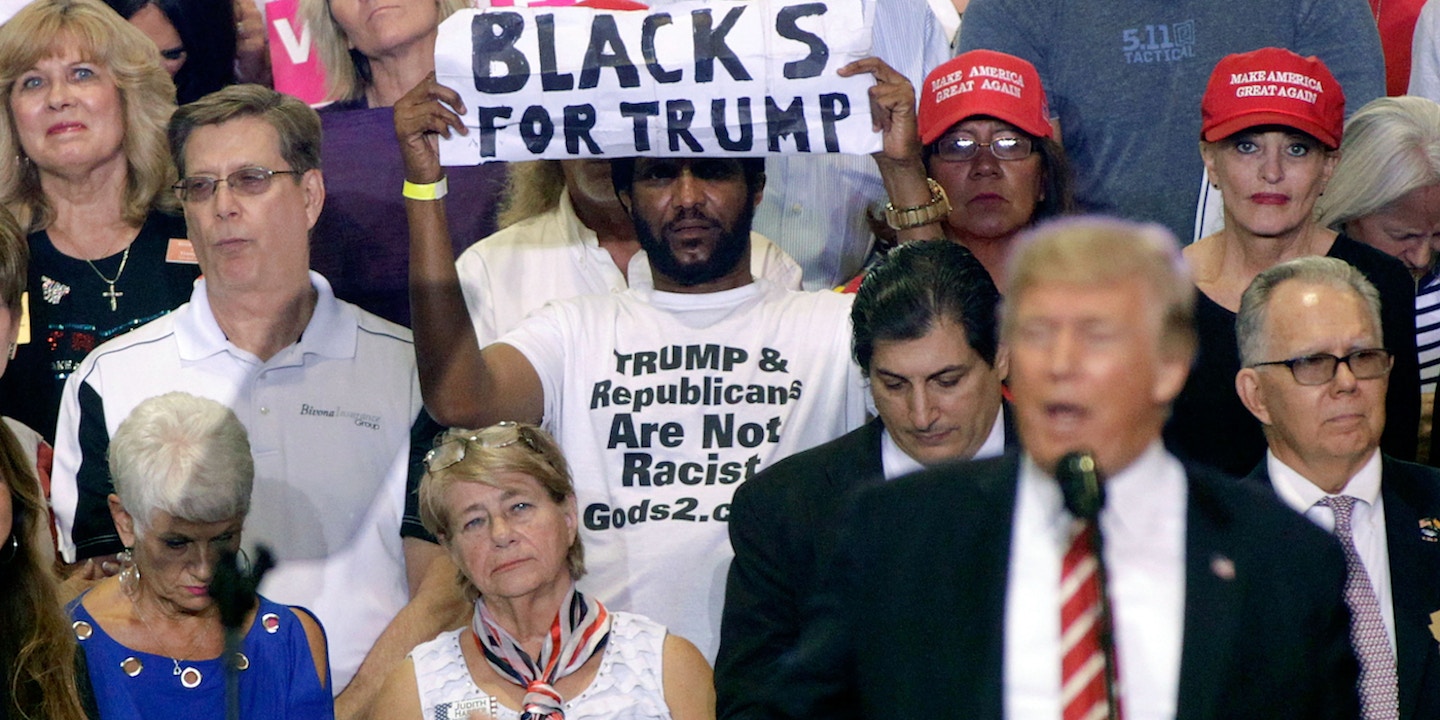 Perfectly positioned in the crowd behind Donald Trump in Phoenix, Arizona on Tuesday night, as the president falsely claimed that he had not defended white supremacists, was a man waving a “Blacks for Trump” sign and wearing a T-shirt that read: “Trump & Republicans Are Not Racist.”

The man, who was born Maurice Woodside but now goes by the name “Michael the Black Man,” was seated in the second row of the bleachers behind the podium, where he could be seen on television throughout Trump’s address.

While being broadcast live on camera, President Trump claims media cameras are being turned off https://t.co/cf0mASESyI

Although it is unclear if he traveled cross-country from his home in Miami on his own initiative, Woodside told a radio station in Chicago that he “wasn’t placed there.” He did, however, play a key role in the spectacle, roaring with approval as the president blamed the media for casting him as a racist after his remarks in defense of white supremacists who rallied in Charlottesville, Virginia last weekend.

If Trump’s staff did play a role in securing a spot for Woodside at center-stage, however, they seem to have overlooked the fact that he holds some very bizarre beliefs about race, including a theory that the Senate is controlled by a secret underground of “Cherokee Mormons.”

That idea, and a number of other confounding claims based on highly eccentric readings of scripture that point to a global race war, are developed at length in rambling, anti-Semitic sermons Woodside has posted on YouTube and Facebook and collected on the two websites displayed on his sign and T-shirt: BlacksforTrump2020.com and Gods2.com. His sign at Trump’s rally directed viewers to the former site.

While it is difficult to follow the logic of most of his rants, a Facebook post from last October, explaining his opposition to Hillary Clinton in apocalyptic terms, gives a taste of his arguments. “Semiramis mother of Nimrod was a White as Snow Canaanite who’s NickName is ISIS passed to Hagar to Nefitiri [sic] to Delilah to Jezebel to Mary Magdalene & the Illuminati has passed it to HILLARY RODHAM CLINTON,” Woodside wrote on Facebook on Oct. 27, two days after Trump praised him at a rally in Florida. Clinton, he added, is “the Great Red (White as Snow see through skin to the Red Bloody Mucle [sic]) Dragon who wants to Kill Sarah the Black Woman of America Rev.12:1-12.”

A post on Woodside’s website last year outlined what he called an international plot to spark a race war. “Arabs & East Indians have stolen America,” Woodside wrote, “& Plots to use Islam & ISIS TO KILL all Black Women of America, all White People & the Police by them causing a RACE War.” 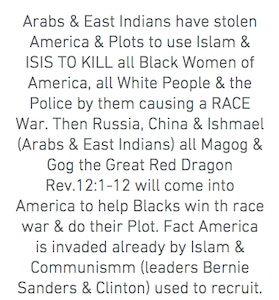 Woodside’s recent obsession seems to be with the idea that the Bible contains coded warnings of a plot by secret Cherokees, Masons, and “shape shifters” to enslave Americans and defeat Trump. “Real KKK Slave Master Revealed & is the Cherokee!” Woodside wrote in one recent post with eccentric punctuation and references to scripture. “Black & White Americans are really Hebrews, (Hos.4:6) & were in America before Cherokees. Solve America’s Debt. make all Indians pay Taxes! Trick: we’re all mixed with them, we pay taxes they don’t & they Hate us, (r.36)!”

As The Intercept and other publications reported last year, he initially reinvented himself as a Republican activist in the 1990s, after the black supremacist cult leader he had followed throughout the previous decade, Yahweh ben Yahweh, was jailed for a series of killings that included the beheading of one victim. Woodside was eventually acquitted of playing any part in those murders, despite testimony from his brother, who had also been in the cult, implicating him in two killings.

When Woodside first attracted national attention for appearing at Trump rallies in Florida last October, and became a hero to conservative activists, Trump supporters argued that campaigns were not responsible for screening attendees, and pointed to the fact that the father of Omar Mateen, who killed 49 people at the Pulse nightclub in Orlando, was spotted behind Clinton at one of her rallies.

Getting down with the Blacks for @realDonaldTrump pic.twitter.com/LOcmhf0Wsc

Woodside’s previous membership in a violent cult, however, combined with his online rants about race wars with “secret Cherokee Mormons,” raises questions not just for the White House but also the Secret Service, which allowed him to be in close proximity to the president 10 months after his troubled history was first reported in the national press.

Top Photo: A radical preacher and former member of a violent cult who goes by the name “Michael the Black Man,” stood behind President Donald Trump at a rally in Phoenix, Arizona on Tuesday.