The Politics of the DREAM Act Seem Pretty Easy, But Some Democrats Are Still Screwing It Up

If Senate Democrats were united in 2010, undocumented immigrants who came to the United States as children would already be on the path to citizenship. 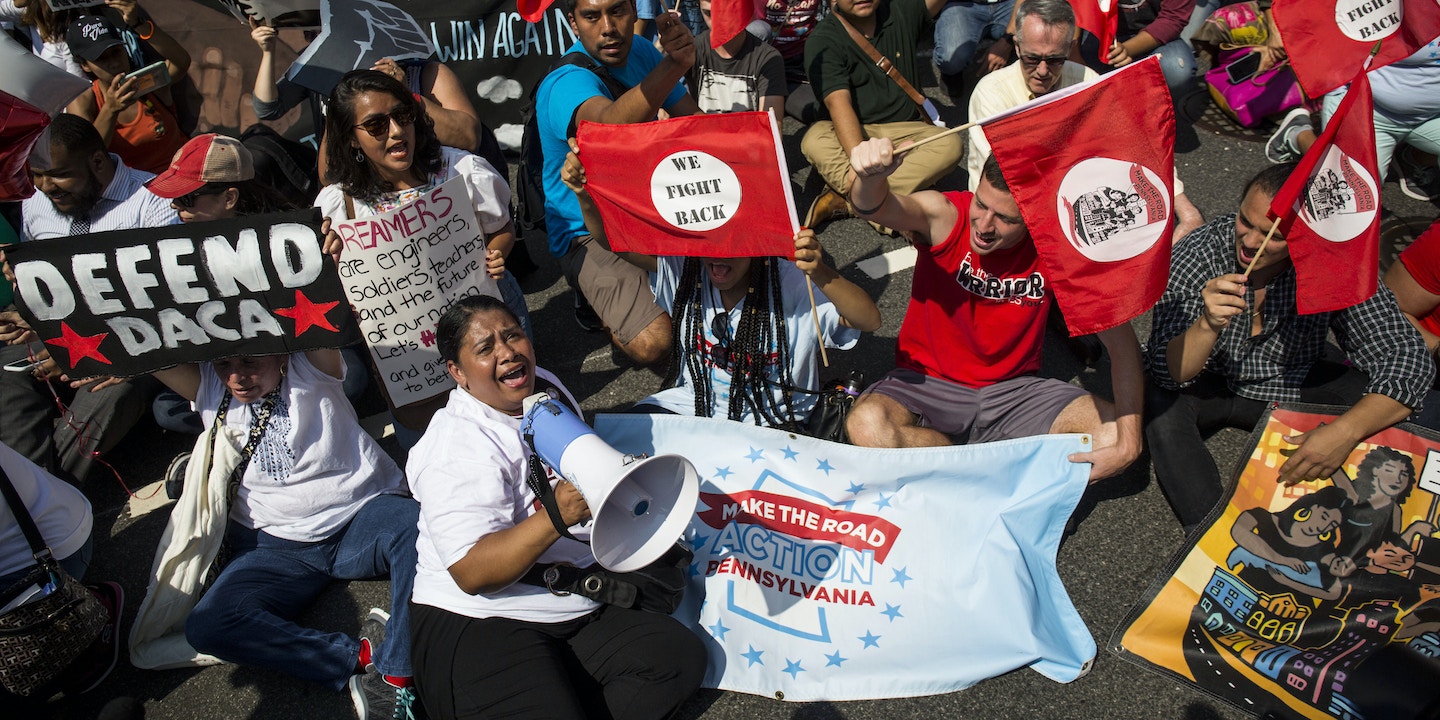 If Senate Democrats were united in 2010, undocumented immigrants who came to the United States as children would already be on the path to citizenship. A vote on the DREAM Act held after the disastrous midterm elections got three Republican votes, enough to break a filibuster at the time if Democrats held firm. But six Democratic defections — five no votes and one abstention — sunk the bill, leading then-President Barack Obama to eventually establish the Deferred Action for Childhood Arrivals program, or DACA, to protect the “Dreamers.”

Jon Tester, D-Mont., is one of two senators still in office who opposed the proposal seven years ago. Back then he faced enormous criticism from the left for calling a path to citizenship for those who had no choice in coming to the U.S. “amnesty.”

On Tuesday, Tester criticized President Donald Trump’s decision to cancel DACA six months from now. “I don’t support what the president did,” Tester told reporters. “I think it’s ill-informed, I think it rips families apart, and it’s not what this country stands for.”

But, a reporter from The Intercept asked, would Tester commit to voting for the DREAM Act, which he voted against in 2010? “I support comprehensive immigration reform,” he said.

Tester’s reaction (he said approximately the same thing in a prepared statement) is clearly well ahead of where he was in 2010. But where he lands on solving the problem — wedding relief for DACA recipients to an overall plan to “secure our borders” and “crack down on folks illegally entering our country” — is where the prospects for a reversal of the DACA reversal may break down in Congress.

Not all conservative Democrats were that cautious. In a statement, Sen. Joe Donnelly of Indiana, who voted against the DREAM Act as a House representative in 2010, said that while the country needs an immigration fix, “in the interim we should pass bipartisan legislation to give these young people, who were brought here through no fault of their own, some clarity and stability.”

North Dakota Sen. Heidi Heitkamp, another Democrat facing re-election, placed herself somewhere in the middle. She said that we should want to bring DACA recipients “out of the shadows” and “help put them on a path toward being productive and contributing members of our country and our communities, as most of them already are.” But she fell back on the need for both parties to work together on a comprehensive immigration bill which includes relief for Dreamers.

Meanwhile, Sen. Joe Manchin, D-W.Va., who missed the DREAM Act vote but said he would have voted against it, has ghosted. No statement on DACA appears on his website or social media, and his office didn’t respond to a request for comment. (He opposed the bill in 2010 because it didn’t have a requirement that a program enrollee obtain a college degree.)

Democratic leaders today demanded that the House and Senate put a standalone DREAM Act up for a vote. But they’ll need as many of their own caucus as possible to vote, and some fraction of them is retreating to call for a “comprehensive” solution instead of directly solving the problem.

The same dynamic is happening on the right, where Sen. John Cornyn, R-Texas, Mitch McConnell’s top deputy, has already said that there’s “no way” the Senate would take up a DACA bill this month, given the packed floor schedule. But he also said “there’s no way it will stand alone.” In other words, Republicans would insist on attaching something else to the bill, such as money for a wall or border security.

Similarly, Sen. Charles Grassley, R-Iowa, who chairs the Judiciary Committee, from which any immigration legislation will emerge, told reporters yesterday, “I don’t think DACA as a clean bill can get through the Congress by itself.”

That’s probably not true. Sen. Lindsey Graham, R-S.C., co-sponsor of the standalone DREAM Act with Sen. Dick Durbin, thinks the concept has 60 votes. Sen. Marco Rubio, R-Fla., added yesterday, “If you were able to have a standalone vote on a good product, [you] could pass it.”

In other words, Congress is falling into two camps: not for and against a DREAM Act, but for and against voting on a DREAM Act by itself. And calling for a comprehensive immigration solution — which Congress has failed to agree on for decades, even when the parties were far less polarized — is pretty close to being against anything getting done. It’s a cheap way to earn support and respect from a public that overwhelmingly supports DACA — 76 percent in favor of allowing beneficiaries to stay, including 69 percent of Republicans — without having to vote to keep them in the country. Sen. Jon Tester, D-Mont., speaks during a news conference to introduce the Deborah Sampson Act at the U.S. Capitol on March 21, 2017.

Tester’s answers to reporters on Tuesday, combined with his spokesperson’s repeated attempts to halt the conversation — “We have a statement! We have a statement! — suggest a politician unsure of the politics with re-election around the corner. But comprehensive immigration reform includes a pathway to citizenship not just for Dreamers, but for millions of others, so Tester is already on record supporting the dreaded “amnesty.” Despite his past vote, the notion that he would vote against a standalone DREAM Act if it came to the floor in 2017 is preposterous, so why won’t he just say so?

The Trump administration seems uninterested in a standalone DREAM Act, though putting Trump in the position to veto it would force him to align what he says with what he does. The White House plans to send “immigration policy goals” to Capitol Hill through the Domestic Policy Council, overseen by the biggest immigration hard-liner in the administration, Stephen Miller.

It is thought that the White House wants to “get something” out of protecting DACA recipients, perhaps funding for Trump’s long-desired border wall or more Border Patrol agents. However, Trump said on Twitter today that he would “revisit” the elimination of DACA if Congress failed to reach a solution.

Sen. Lamar Alexander, R-Tenn., told reporters yesterday that the president “has an opportunity to show the same kind of leadership on immigration that President Nixon showed on China. In fact, I think that President Trump might be the only president who can take the immigration issue, and help us come to a result that secures the border, creates a legal immigration system, solves the problem with these children who were brought here illegally.”

That seems extremely fanciful, to say the least, given Trump’s record of legislative achievement so far. And Trump has already called on Congress to protect the Dreamers, so it’s unclear what more the Senate needs him to do. He is not known for his attention to legislative detail. That’s the job of somebody like Alexander.

Tuesday’s DACA announcement may get held up on legal grounds; the White House did not give notice and offer the public a chance to comment before changing the rules. California Attorney General Xavier Becerra and other Democratic attorneys general have already vowed to sue. But getting a durable solution for Dreamers will require supporters to be very specific with lawmakers. If they support keeping those protected under DACA in the country, they have to be willing to pass that bill. Anything that gets caught up in thorny immigration politics is a kind of substitute for saying no.

Top photo: Demonstrators sit on Pennsylvania Avenue during a demonstration in response to the Trump administration’s announcement that it would end the Deferred Action for Childhood Arrivals (DACA) program in Washington on Sept. 5, 2017.