Tens of thousands of Haitian immigrants might have to choose between returning to an unstable country or risking deportation. 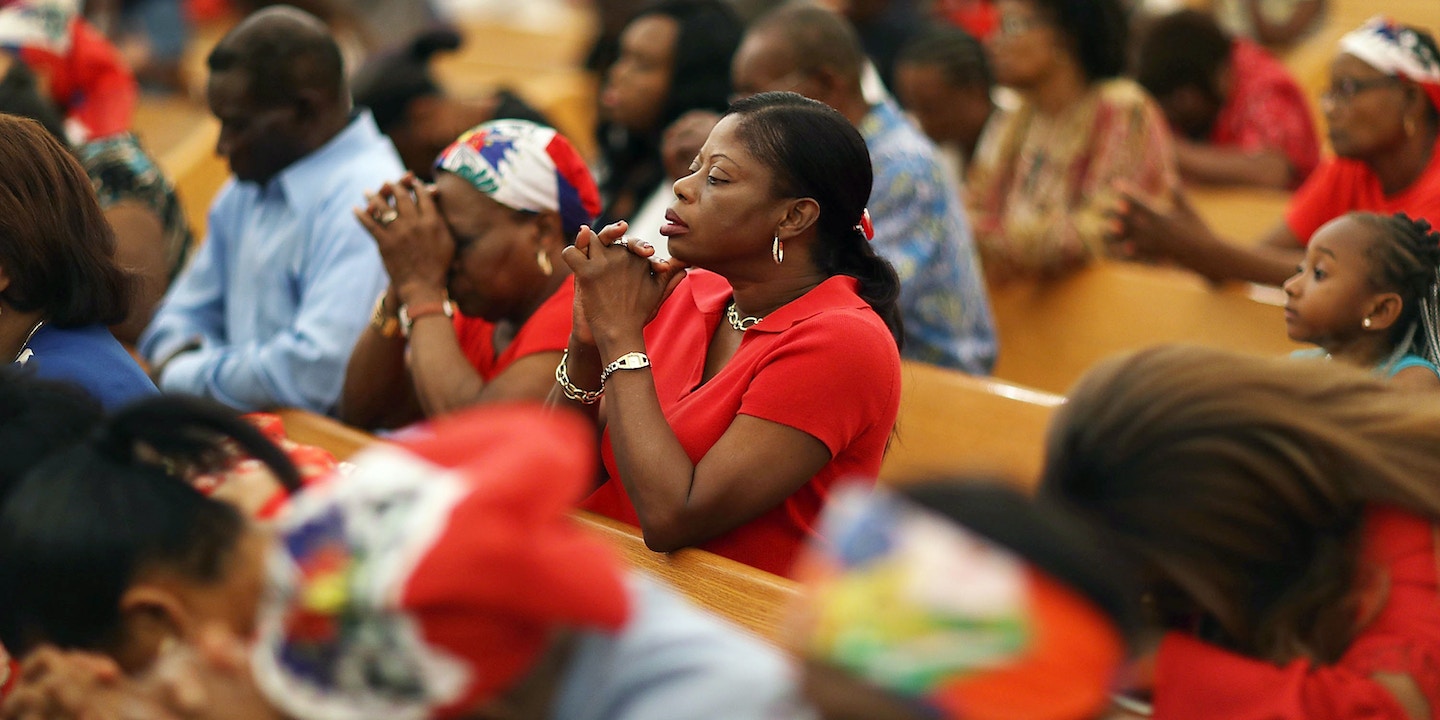 President Donald Trump courted Haitian voters in Miami’s Little Haiti neighborhood two months before the 2016 presidential election, saying he wanted to be their “greatest champion.” He had come to “listen and learn,” he told members of the largest Haitian community in the United States. Haitians, he said, deserved better than Hillary Clinton, whose Clinton Foundation has been accused of profiting from relief efforts following the 2010 earthquake. The day before the election, then-Breitbart reporter and now-special assistant to Trump Julia Hahn wrote that Haitian-Americans were in a unique position to “exact revenge” on the Clintons by delivering Florida to Trump.

But if the Department of Homeland Security upends a program currently in place to protect Haitian immigrants, the community will be one more in a long line of folks who went broke betting on Trump.

The DHS is poised to send 59,000 Haitians who benefit from a program called “temporary protected status” back to an island that has yet to recover from a series of  devastating natural disasters, including Hurricane Matthew last year, and a deadly cholera outbreak. Trump has until November to change his mind.

Haiti is one of 10 countries the DHS has designated for TPS based on conditions that “temporarily prevent the country’s nationals from returning safely, or, in certain circumstances, where the country is unable to handle the return of its nationals adequately.” For Haiti, the TPS designation stemmed from the catastrophic 2010 earthquake. El Salvador, Honduras, Nepal, Nicaragua, Somalia, Sudan, South Sudan, Syria, and Yemen, countries ravaged by violence or torn apart by natural disasters, also have active TPS designations. TPS, as its name indicates, is a temporary solution with no pathway to citizenship, but it allows nationals of those countries to live and work in the United States for as long as DHS deems their home countries unsafe to return to.

The program, which can be issued for periods between six and 18 months, is “the statutory embodiment of safe haven for those migrants who may not meet the legal definition of refugee but are nonetheless fleeing – or reluctant to return to – potentially dangerous situations,” according to a Congressional Research Service report.

There is bipartisan consensus in Florida that Haiti is, in fact, not a safe haven for its people to return to. As Haiti’s July expiration date for TPS approached, Florida’s Republican Gov. Rick Scott joined Sen. Bill Nelson, D-Fla., Sen. Marco Rubio, R-Fla., and members of South Florida’s congressional delegation in calling on the DHS to extend protection for Haitians. Then-DHS Secretary John Kelly heard their call — kind of. He extended the program for six months and told Haitians to be ready to return home come January.

The DHS is expected to announce whether the program for Haiti will be terminated or extended in November, but despite recent unrest in the country and pressure from lawmakers and immigration groups, the agency seems unlikely to budge.

“DHS’s guidance remains unchanged for Haitians with TPS,” U.S. Citizenship and Immigration Services spokesperson Sharon Scheidhauer told The Intercept in a statement. “Beneficiaries are encouraged to prepare for their return to Haiti in the event Haiti’s designation is not extended again, including requesting updated travel documents from the government of Haiti,” adding that Acting DHS Secretary Elaine Duke will make a final determination, as required by law, at least 60 days before the program’s January 22, 2018 expiration date. (The DHS is expected to make decisions on Honduras and Nicaragua, whose designations also expire in January, in November as well. There are 86,000 Honduran TPS holders and 5,000 Nicaraguans, according to USCIS.)

Rony Ponthieux, 41, is one of an estimated 32,500 Haitian TPS holders in Florida. He’s lived in the Miami area for 18 years and says he’s not ready to take his family back to the country he fled in pursuit of asylum.

“Haiti is not ready to receive 58,000 people, and it’s not only 58,000 people, it’s multiplied by two or three, because each family has more people,” said Ponthieux, adding that it will be challenging to find quality education for his 17- and 10-year-old children on the island. Women walk past a mural in the Little Haiti neighborhood on May 17, 2017 in Miami.

While Haitians are hoping the program will be extended, many are concerned about the $495 renewal fee for TPS and a work permit, said Patrice Lawrence, a national advocacy and policy coordinator at UndocuBlack Network, an advocacy and support group for black undocumented people. In the past, the program was extended for 18 months at a time, but because the DHS set a six-month expiration date on its last renewal, a re-designation would mean applicants would have to cough up that sum for the second time in one year. “Our hope is of course that [the DHS] will extend, so the only conversation we’ll be needing to have with folks is, do you have enough money to extend,” Lawrence told The Intercept.

Just last week, the DHS announced an 18-month extension of TPS for South Sudanese nationals but a termination of the program for Sudan, sending mixed signals about the future of the program as a whole. As of December 2016, there were 49 TPS beneficiaries from South Sudan and 1,039 from Sudan, according to USCIS. By law, the DHS is required to review a TPS designation at least 60 days before it expires and publish a decision on a “timely basis.” The decision on Sudan came two weeks after its September 3 due date, which created chaos and caused anxiety among immigrant groups, Lawrence told The Intercept.

“The decision to terminate TPS for Sudan based on a determination that conditions in Sudan no longer support its TPS designation is reprehensible and disconnected from the reality on the ground,” said Opal Tometi, executive director of the Black Alliance for Just Immigration and co-founder of the Black Lives Matter movement, in a statement. “While TPS is far from a permanent solution to the vast challenges facing Black immigrants from Sudan, it offers an important refuge from the ongoing conflict, drought, famine, and food insecurity in the nation.”

Jeanne Atkinson, executive director of CLINIC, an immigration organization involved in training and advocacy, described the decision as “cruel and inhumane,” adding that dangerous conditions in Sudan warrant an extension. “There is absolutely no need to send people who are living peacefully, raising their children, and contributing to the American economy and society back to a country where their lives could immediately be put at risk,” Atkinson said in a statement.

The extension for South Sudan could mean one of two things for Haiti, said Marleine Bastien, executive director of Haitian Women of Miami, a group that offers community services to South Florida’s large Haitian population and has been leading the drive to renew TPS for Haitians and Central Americans. Either the Trump administration realized the “absurdity” of its July decision to renew the program for Haitians for only six months, or the DHS is continuing “the historic discrimination” against Haitians, she told The Intercept. (In the early 1990s, the United States had a policy of returning Haitian refugees to the island nation, and in the 1970s, thousands of Haitian asylum-seekers had their work permits illegally revoked.)

“It’s going to be quasi-impossible to ask people to deport themselves after living in the country for so long and having given the contributions they’ve made,” Bastien said. “I prefer to believe that maybe [the administration] realized their mistake and that they are fixing it.”

Ponthieux, a registered nurse who works at Jackson Memorial Hospital in Miami, is hoping to obtain an employment-based visa that will allow his family to stay in the United States. He said TPS recipients are “in the same boat” as immigrants brought to the U.S. illegally as minors who were shielded from deportation under Obama’s Deferred Action for Childhood Arrivals program — which the Trump administration is now winding down.

“If we have the help of congressmen, we can change the law and work to get permanent status for TPS recipients and Dreamers —that would be the best thing to do,” Ponthieux said, adding that the Trump administration is “not easy.”

Like DACA participants, many TPS recipients may soon be left with an impossible choice: return to an unstable country – which, in many cases, has not been home for decades – or stay put and live in the shadows. Some Haitians, fearing deportation, have journeyed to Canada to seek asylum.

“When you’re faced with a crisis of such magnitude, you try to grab any lifeline,” Bastien said. “If you’re in a river and you’re drowning, any branch you will grasp.”

Top photo: Parishioners pray together during a service at the Notre Dame D’Haiti Catholic Church as they celebrate Haitian Flag Day in the Little Haiti neighborhood on May 18, 2017 in Miami. The prayer service also touched on the church’s concern about the outcome of the decision on extending temporary protected status for Haitians living in the U.S. because it would possibly mean friends and families would be sent back to Haiti.