Sen. Lindsey Graham said he’s optimistic about repealing and replacing Obamacare next year, but the votes in favor of his plan are far from certain. 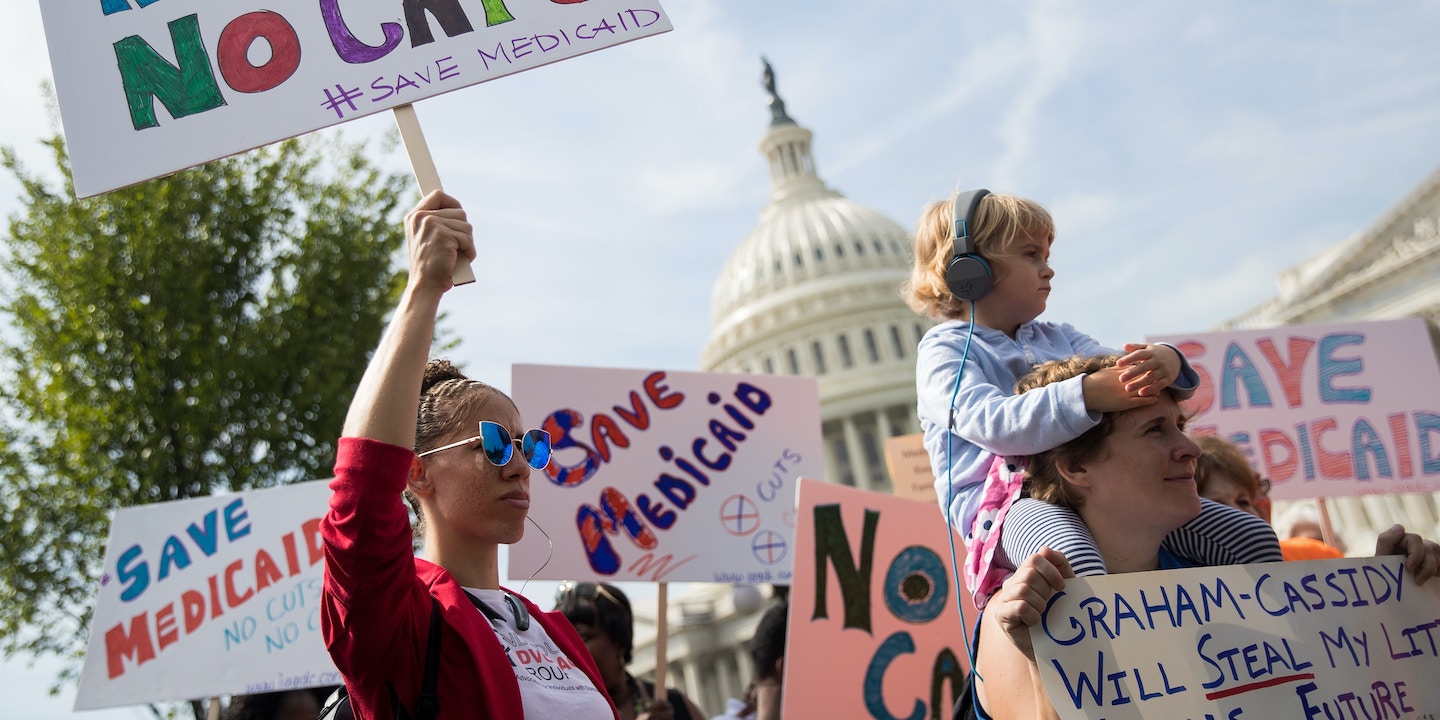 This year’s effort to repeal and replace the Affordable Care Act is dead, but Senate Republicans are vowing to take another run at it next year.

Even after Senate Republicans scrapped the vote on the Graham-Cassidy bill this week, lead sponsor Sen. Lindsey Graham, R-S.C., said he remains optimistic about the legislation eventually passing because the missing votes were “actually more about process than substance.”

“With more hearings, with regular order, we’re going to get 50 votes,” Graham said during a press conference Tuesday. “We’re going to fulfill our promise.”

Former Sen. Rick Santorum, who has for some reason or another partnered with Graham in this effort, told The Intercept on Tuesday afternoon that he is confident Sen. Lisa Murkowski, a key Republican holdout from Alaska, will come around next year if the bill goes through the normal committee process. “I know having talked to Lisa just a couple hours ago, she thinks it’s a good idea and she thinks the idea will stand up under public scrutiny, and it makes it an easier vote for everybody,” he said.

Graham and his co-conspirators previously said they would demand that tax cuts and health care reform be lumped together if they failed to make headway on health care in September. But on Tuesday, Graham changed course, saying he is now willing to let tax reform go ahead on its own because he had been unaware how complex tying the two together would be. Then, in the spring, Graham said, he will insist on a new budget resolution that allows for another crack at repeal using a 50-vote threshold — what is called budget reconciliation in the Senate.

Before Republicans spend another year plotting an ACA repeal, they may want to reflect on whether they have what it takes to get those 50 votes. Some of the key players are Murkowski, Rand Paul, John McCain, and Susan Collins. But there are a few additional wrinkles: Come November, Alabama’s junior senator will either be Republican Roy Moore or Democrat Doug Jones, and neither is sure to vote with Senate Majority Leader Mitch McConnell. And in New Jersey, Republicans are eyeing a possible senatorial conviction to potentially flip a seat, which would make the health care vote even more unpredictable.

What about Rand Paul?

Paul is the least likely to stand with the GOP’s repeal effort. The Kentucky senator has dug himself into a firm “no” vote against anything that isn’t a clear opposite of the ACA. He flipped his vote in July, but only after he was promised the bill he was voting for would go to conference before coming back to the Senate, making the vote largely meaningless in a practical sense.

On Monday, The Intercept asked Paul if there was anything anybody could do to get his vote on a repeal-and-replace bill. “I just got off the phone with the president and told him there were some good things in the bill — expanding [health savings accounts], waivers for governors, and entitlement caps,” he said.

Those are the parts of reform he likes. But he won’t vote for anything that doesn’t include major tax cuts and spending cuts — changes that would alienate Murkowski and Collins, and perhaps a few others.

Many Senate watchers also believe that Paul’s rationale for opposition — that the proposed repeal bills haven’t gone far enough — is cover for the fact that Kentucky’s implementation of the Affordable Care Act has been a roaring success, and gutting it would be devastating to the state. If that’s true, Paul will never say so out loud, not that Democrats aren’t asking him to, content to have his vote however they can get it.

What about Lisa Murkowski?

In her statement released after the bill was officially yanked from the floor, Murkowski did indeed express openness to the framework Graham and co-sponsor Sen. Bill Cassidy had constructed. “I recognize the status quo with health care in this country is unacceptable. Giving control back to the states and flexibility are ideas I can get behind,” she said. “But substance matters and the ability to validate data matters.”

It is conceivable, then, that if a future bill went through a regular process and was heavily generous to Alaska, she could get behind it. “Coming from the state that has the highest health care costs and the lowest population density, the numbers really do matter. I have been working for weeks to get true, accurate data about what this proposal would mean for Alaska,” Murkowski said.

What about John McCain?

This is where it gets macabre. McCain, a key “no” vote, is living with a brain cancer diagnosis that is nearly always fatal. The same cancer took the life of his good friend, Sen. Ted Kennedy, and almost upended the push to pass the Affordable Care Act, after Scott Brown filled his seat. Were McCain to lose his battle with cancer, Arizona’s GOP governor would appoint a Republican rubber stamp. Depending on the circumstances, some Republicans, such as McCain’s best friend Graham, may oppose rushing forward with repeal on pure human decency grounds.

What about Bob Menendez?

A 2016 U.S. Supreme Court decision makes it awfully difficult to convict a politician of corruption, but New Jersey Democrat Bob Menendez may have managed to cross even that lowered bar. He’s on trial now for gifts he took from his wealthy friend Salomon Melgen, who needed the senator’s help with with a variety of unsavory schemes. Menendez denies very little of it, but instead argues that because Melgen is his friend, there was nothing illegal about the gifts.

If a jury disagrees and convicts Menendez before Republican Gov. Chris Christie leaves office, it’ll create a political crisis. Menendez is likely to try to hold on to his seat long enough for a Democrat to be elected and seated to replace Christie. Democratic gubernatorial hopeful Phil Murphy is likely to win the November election by a wide margin, and if he takes office in January, he will be able to appoint another Democrat to take Mendendez’s seat — another “no” vote on health care repeal. But if Menendez is convicted and forced out with Christie still in office, the governor could appoint his successor instead, and the GOP would have another vote.

What about Roy Moore or Doug Jones?

McConnell suffered a lot of losses on Tuesday. He pulled the repeal vote, Sen. Bob Corker, R-Tenn., announce his retirement, and McConnell’s chosen candidate in Alabama’s Senate race, Luther Strange, lost the primary. McConnell spent millions of dollars trying to beat Moore; now, his best-case scenario is welcoming a Republican who got elected by slamming McConnell. The Kentucky senator’s worst-case scenario is Democrat Doug Jones upsetting Moore, which will mean a definite “no” vote on repeal. If Moore is elected, there’s no telling whether he’ll vote with the party to repeal or play more of a wildcard, Rand Paul-style role.

More evidence @MooreSenate would be a nightmare for @SenateMajLdr - campaign spox says he would vote no on Graham/Cassidy. Wants full repeal pic.twitter.com/FScKvmPIkw

What about Susan Collins?

The Maine senator’s health care vote is unpredictable because she has her eye on her state’s 2018 gubernatorial race. She can take a few different paths to the governor’s mansion. If she chooses to run as a Republican, she’ll have a hard time getting the support of the tea party, the pro-Trump wing of the GOP, and could lose in the primary. She could also make a bid as an independent, a not-uncommon move in Maine. The state’s other senator, former Gov. Angus King, is an independent who caucuses with Democrats.

What path Collins takes, or whether she takes one at all, could influence her vote on health care reform. But as of now, she is firmly committed to her stance that the ACA repeal needs to be done deliberately and in a bipartisan fashion. Here’s what she said to reporters on Tuesday:

Our focus should be on repairing the many flaws that are in the ACA. At this point, the ACA is interwoven in our health care system, in a way that it is very difficult to repeal it outright unless you have a very thoughtful, thorough analysis of the replacement.

And part of the problem that we have had has been a lack of hearings, debates, and careful consideration and vetting of the health care replacement bills, and in that regard I agree strongly with Senator McCain’s comments about the normal order.

Just think, in the Senate Health Committee we held four substantive hearings on relatively small issues to make sure that we got them right.

When you’re talking about reforming our health care system — which affects millions, tens of millions, hundreds of millions of Americans and also one-sixth of our economy — it’s very important that you get it right.

I’ve been leaning against the bill for some time, but this has been a challenge because the bill had been changing, including last night, a whole new bill came out, which to me epitomizes the problem. So it has been a challenge to constantly analyze each of the bills, of which there have been four separate versions including one that was put together just over the weekend.

I’ve done a lot of work. I’ve consulted with health care experts, with think tanks, with [the Congressional Research Service], and I wanted to wait until [the Congressional Budget Office] released its analysis today on the coverage piece even though it’s on the previous bill. But frankly, that’s going to be a problem on this bill as well.

I have been strongly leaning no, but I wanted to have the estimate of the coverage problem confirmed by CBO before reaching a final decision. It’s been very difficult because it’s been a moving target.

The Intercept asked Collins if, given all of her objections, there was ever a chance she could have voted for Graham-Cassidy.

“It would’ve been very difficult, because this is so complex and you pull one thread in the tapestry, and it has an effect on a whole ‘nother section in the painting that you have,” she said, pausing to criticize her own mixed metaphor. “In other words, our health care system is so complex that it is very difficult to change one part and not see a ripple effect.”

Top photo: Health care activists hold signs during a news conference in opposition to the Graham-Cassidy health care bill on Sept. 26, 2017 in Washington.