Much to the dismay of a handful of American shipping companies, the Trump administration announced that it would temporarily waive the Jones Act. 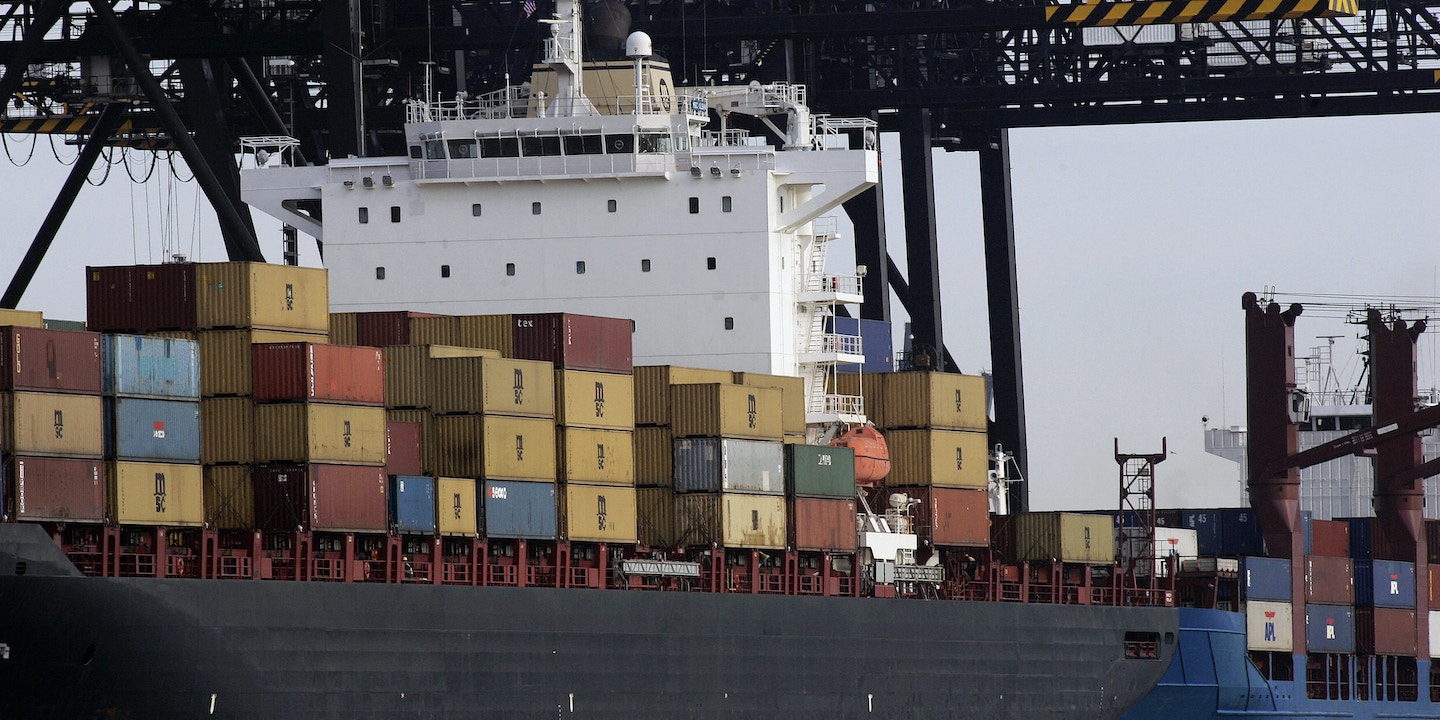 Allowing foreign ships to bring goods to hurricane-ravaged Puerto Rico would be a grave threat to national security, warned a handful of American shipping companies who have the trade routes locked down thanks to a century-old law.

They wanted to see that law left in place, thank you very much. Much to their discontent, President Donald Trump’s administration announced Thursday morning that it would temporarily waive the law, known as the Jones Act.

Puerto Rico, suffering from the combined forces of economic collapse, debt-driven austerity, and Hurricane Maria’s devastation, faces restrictions on imports from foreign registered ships under the Jones Act, a law supported by a small but powerful group of American companies that dominate U.S.-Puerto Rico shipping routes.

The Jones Act, created over 100 years ago to shore up the domestic shipbuilding industry, imposes stiff fines on foreign-built and registered ships that move cargo between U.S. ports. (Foreign ships are allowed into port if they originated from a foreign country, but not if they docked in another U.S. port first.)

Many have recently argued that the law has dragged down the Puerto Rican economy by artificially increasing costs for island residents and businesses. And there is outrage that the Trump administration denied a temporary waiver to Puerto Rico from the Jones Act in response to the hurricane — despite the fact that a similar waiver was granted for hurricane disasters in Texas and Florida.

Resistance to the waiver came as millions of Americans were without clean drinking water, facing a life-threatening situation that has already turned deadly for some.

Despite a push by lawmakers to repeal or significantly change the Jones Act in order to revitalize Puerto Rico, the shipbuilding industry pushed back.

Fair Kim, counsel of the American Maritime Congress, a nonprofit lobbying group representing the U.S. shipping industry, disputed calls for a repeal of the law, arguing that such a move could create profound national security consequences.

Kim claimed the Jones Act is fairly similar to rules that govern the trucking and airline industries, and those who argued that the act is protectionist fail to appreciate the danger of more foreign ships into U.S. ports.

“You don’t have Air Yemen flying Chicago-to-Cleveland routes on an Iraqi-flagged aircraft with standards from Yemen and pilots that are Russian,” Kim told The Intercept.

The original Jones Act, officially titled the Merchant Marine Act but known by the name of its congressional sponsor, was passed in 1920 after World War I in reaction to the destruction of U.S. merchant vessels by the German navy. The national security concerns that ushered in the law, deemed by media at the time as an “American first” shipping law, are still relevant, according to the shipping industry.

“You don’t want a foreign country to control the acquisition, design, and construction of a war ship,” Kim argued. Military cargo is currently shipped all over the world, from supplying South Korea to the wars in Iraq and Afghanistan, through U.S.-flagged merchant marine vessels. If the Jones Act is repealed over Puerto Rico concerns, Kim said there would be a depletion of not only U.S.-flagged vessels, but a brain drain of the merchant marine workforce.

“You go hot with a war in Korea, you’re going to have the lowest bidder, lowest international bidder, again, a Malaysian-owned vessel that’s chartered in the Marshall Islands, that’s flagged to Belize, with a Croatian and Pakistani crew on board, with a cargo of U.S. munitions,” Kim said. He added that his theoretical example was “hyperbole” but “that’s where we’re headed” without the Jones Act.

The act, however, only covers vessels traveling between two U.S. ports. About 8,000 foreign vessels already make over 50,000 visits to U.S. ports under current law.

Kim noted that the industry would not dispute a temporary Jones Act waiver for Puerto Rico but does not believe such a policy is necessary at this time. “If a waiver is granted, of course we’re not going to stand in the way of that,” Kim said. “Right now our position is that there is no need for a waiver. There is no need for it because there is already excess capacity for U.S. vessels into Puerto Rico.”

Industry lobbyists had raised similar claims over the last year as they had fought to maintain Jones Act rules for Puerto Rico.

“A few have taken this legislative activity as an opportunity to urge that a Jones Act exemption for Puerto Rico be included in the package,” said Michael Roberts, vice president of Crowley Maritime, during a hearing last year on reform issues for the island. “They have offered no credible proof that such a change would help Puerto Rico, and we are confident it would do more harm than good both for Puerto Rico and for the country generally.

“Such a change would put at risk the reliable, efficient service the island currently receives, as well as hundreds of private-sector jobs on the island, with no offsetting gains. It would also send a chilling message that would bring further investment in vessels built in U.S. shipyards to a standstill,” Roberts added.

Asked for comment by The Intercept, Tyler Edgar, a spokesperson for Tote Inc, a shipping conglomerate that owns Sea Star Line, pointed to a statement by the American Maritime Partnership that sharply criticizes the effort to rollback the Jones Act over the crisis in Puerto Rico. The statement claims that granting a Jones Act waiver for Puerto Rico could “overwhelm the system, creating unnecessary backlogs and causing confusion on the distribution of critical supplies throughout the island.”

Shipping industry voices contend that the main issue with Puerto Rico’s lack of resources stems from internal distribution issues and logistical problems relating to how supplies are moved from the port to where they are needed.

But critics not only point to increased costs for Puerto Rican residents from the Jones Act, but also question the virtues of the U.S. shipping industry.

A Department of Justice antitrust investigation found that between 2002 and 2008, Jones Act shipping firms Sea Star, Crowley, and Horizon conspired to fix prices on commercial cargo shipped to Puerto Rico. The investigation led to the conviction of the former president of Sea Star Line, who was was sentenced in 2013 to serve five years in prison for engaging in the conspiracy, one of the longest prison terms for an antitrust violation. In a separate case, both Sea Star Line and Horizon paid $3.4 million to settle claims arising from a whistleblower, who claimed that the firms engaged in a price-fixing scheme on government cargo between Puerto Rico and the U.S mainland.

Update: Sept. 28, 2017, 10:07 a.m.
This story was updated to reflect the Trump administration’s waiver of the Jones Act on Thursday morning.