Journalists, lawyers, and demonstrators are facing 70 years in prison each — more than the minimum sentence for murder. When Texas photojournalist Alexei Wood goes to court in Washington, D.C., on November 15, he’ll be one of the first people to face charges stemming from protests around the inauguration of President Donald Trump. Wood and five others are being charged for their alleged involvement in what prosecutors are describing as a riot on the morning of January 20, hours before Trump was sworn in at on the Capitol steps. All nine defendants face up to 70 years in prison.

The case’s outcome could set a precedent that would affect all of the over 200 remaining defendants awaiting trial for the “J20″ protests who face the same strict maximum sentence.

“The government doesn’t like this kind of activity in its city,” said Wood’s lawyer, Brett Cohen.

The U.S. Attorney’s Office for the District of Columbia did not respond to requests for comment, but information gleaned from the April 27 indictment indicates the sort of tactics the government will use against the defendants, who will be tried in staggered groups of around eight beginning November 15.

By charging everyone together with conspiracy counts, the government seems intent on making an example of the J20 protesters. “They’re prosecuting us as a group,” Wood said.

The government may attempt to force members of the same defense into a situation in which their aims conflict with one another. “Defendants have to be careful, regardless of how they feel about particular parts of the indictments, that the prosecution’s case not hurt their fellow co-defendants,” said Sam Menefee-Libey, spokesperson for the Dead City Legal Posse, a support network for J20 arrestees that provides housing, court support, and other services to assist in their navigation of the capital’s judicial system.

The conflation of the protesters as a whole with the alleged violent acts of a few in the crowd is worrying to Menefee-Libby. It would be a “radical departure” from a basic understanding of the law, Menefee-Libby said, if the government prosecutes people solely for their proximity to criminality. “Individuals can only be held responsible for their own behavior,” said Menefee-Libby, describing a fundamental tenet of the U.S. justice system.

That the government’s case does not differentiate between actors and bystanders could be an indication of future clampdowns on protest. “Even if we take the government at their word, that members of the protest had unlawful goals,” said attorney Shana Knizhnik, of the American Civil Liberties Union’s D.C. chapter, “it’s undeniable they also had lawful goals.” 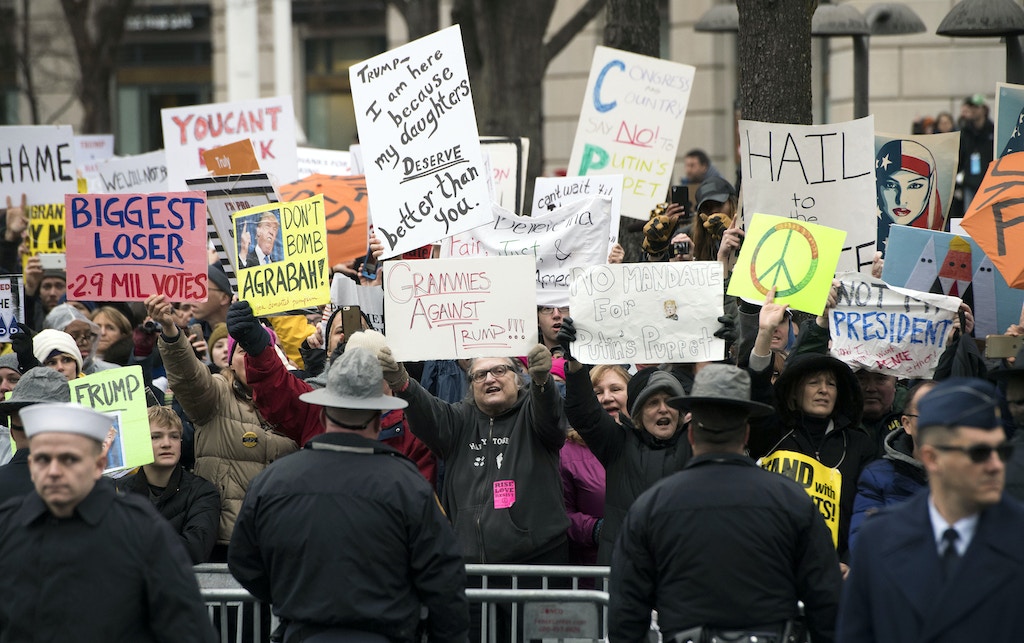 Protesters demonstrate as President Donald Trump and first lady Melania Trump walk in the inaugural parade after being sworn in at the 58th Presidential Inauguration on Jan. 20, 2017 in Washington, D.C.

The lawful aim of the January 20 protesters was to exercise their First Amendment right to express dissatisfaction with the incoming Trump administration. With Trump’s standing as the most unpopular incoming president in at least 40 years, it was unsurprising that the inauguration would be met with demonstrations.

Wood went to Washington to document that discontent, he told The Intercept. A full-time freelance photojournalist for the past three years, Wood’s work has a focus on resistance movements. He left his home in San Antonio, Texas, to travel to Washington and report on events around the inauguration. “I was there to document whatever happened,” Wood said, adding that he had no idea of any planned actions. Wood livestreamed the protests on his phone and recorded them on a separate video camera.

The situation quickly turned chaotic. Some members of the protest crowd adopted black bloc tactics, hiding their identities and taking part in minor property destruction. “There were windows breaking, chemicals in the air,” said Alex Stokes, another journalist who was arrested on the January 20, though the charges against him were later dropped. “The cops didn’t seem to have any control over the situation.”

The Metropolitan Police Department said in a statement it could not offer comment on the specifics of pending litigation, but noted that there were “individuals who chose to engage in criminal acts, destroying property and hurling projectiles, injuring at least six officers.” The police added, “As with any pending criminal or civil matter, we will continue to support and respect the formal legal process. Moreover, all instances of use of force by officers and allegations of misconduct will be fully investigated.”

On Inauguration Day, the march moved through the city “with no real coordination,” said Stokes until demonstrators arrived at the intersection of L and 12th streets. The police then used a tactic known as kettling to trap the protesters in advance of their arrest. “The cops blocked one end of the street and then followed us in from the other side,” said Stokes.

Stokes and Wood said hundreds of protesters — including journalists and legal observers — were caught in the kettle. “It was indiscriminate,” said Wood. A group of around 100 made a break for it and escaped, but the remaining group of over 230 were all arrested and locked up through the weekend. “Journalists, lawyers, the average protester: Those are the people they kettled, arrested, and charged with felony riot,” said Stokes. (Another journalist who faces charges, Aaron Cantú, has contributed to The Intercept, though he was not on assignment for the website on January 20.)

The felony charge came after 36 hours in lockup, said Wood. He added that, while detained, he heard that the government had a list of misdemeanors with which the protesters were going to be charged. While in custody, however, Wood was charged with a felony. Three months later, on April 27, a grand jury handed down a new indictment that added 13 additional counts. Police and demonstrators clash in downtown Washington after a limo was set on fire following the inauguration of President Donald Trump on Jan. 20, 2017 in Washington, D.C.

The government, according to civil rights groups, is attempting to use charges of conspiracy to riot to act as an umbrella under which it can hold the defendants responsible for any crimes allegedly committed during the protest. “Under the law of conspiracy,” the ACLU’s Knizhnik explained, “people agree to commit unlawful acts and form a group based on that agreement. And then if they commit unlawful acts in furtherance of that agreement, they can be held liable for the acts of the entire group.”

Wood and Cohen, his lawyer, have made a motion to sever Wood’s case from the other defendants because his video footage could be used in different ways during the trial. Different defendants have different priorities for their own defenses, which can present complications in court. It’s a common issue when multiple defendants are tried together, said Knizhnik: “When you’re tried at the same time, you can’t present conflicting theories.”

The government’s case relies on Wood’s video and intends to use the documentation from the footage in every trial. Wood’s recording equipment was confiscated when he was arrested; it has not been returned to him because his charges weren’t dropped. Stokes, on the other hand, had a different experience due to his charges being dropped. “They held onto the video until my case was dismissed,” said Stokes, “then they gave it back.” A worker stands while cleaning a window smashed by anti-Trump protesters on Jan. 20, 2017 in Washington, D.C.

The court will rule on Wood’s motion to be tried separately on or around November 8, Cohen told The Intercept. The government gave a single response called an omnibus opposition brief to several of the arrestees’ motions to sever their charges from the group. Wood gets a section of his own — precisely because of the video — in the government brief:

The Defendants [sic] severance arguments fails to acknowledge that the government intends to use the Wood Video, in its case-in-chief, in every trial, regardless of defendant Wood’s presence at the trial. The Wood Video is admissible against every defendant as it captures, in real time, the words and actions of participants in the “black bloc” during the riot and captures the destruction and violence during the riot. It is direct evidence of the crimes charged against every defendant.

The ACLU motioned to file an amicus brief with the court on October 17 to argue that the goals of the defendants were at least in part based on the First Amendment. The motion was denied two days later. Despite the rejection, ACLU-DC Strategic Communications Director Suzanne Ito told The Intercept, the organization will keep a watchful eye on the case as it proceeds through court.

It’s ultimately unclear what will happen to Wood and his co-defendants during their trial and in subsequent cases. “Nobody knows what to expect,” said Cohen, the lawyer. It seems clear to observers, though, that the case against Wood and the rest of the defendants — and the looming 70-year sentences — is meant to send a message. “I don’t know what kind of mental gymnastics they’re going to have to perform in the courtroom to make that seem reasonable,” said Stokes. “You could murder someone — if somebody walked into downtown D.C., pulled a gun out, and shot a cop in the head — and you could get less time than what these people are facing.” First-degree murder charges in D.C. carry a minimum sentence of 30 years.

Stokes said the case represented a drastic overreach in law enforcement’s response to the protests. “There are approximately 200 people facing 70 years, going to trial for six broken windows,” he said. “This is insane.” Stokes added that the protesters were not given an order to disperse.

The injustice of the arrest, the charges, and the case isn’t lost on Wood either. And while the government may be trying to turn the defendants against each other, he is maintaining a sense of solidarity that he plans to carry even after his own case ends. “Any fucking support I can give them,” Wood said, of the other defendants facing trial, “I will.”

Correction: October 25, 2017
An earlier version of this story said that Alex Wood faces trial on November 15 with eight codefendants. He is going to court along with five other defendants. The remaining 3 had their trials postponed because their lawyer was dismissed last week.

Top photo: A protester takes a picture while holding a sign that reads “Impeach” in downtown Washington following the inauguration of President Donald Trump on Jan. 20, 2017 in Washington, D.C.