The Unwanted: A Haunting Look at the Rohingya Who Escaped Ethnic Cleansing 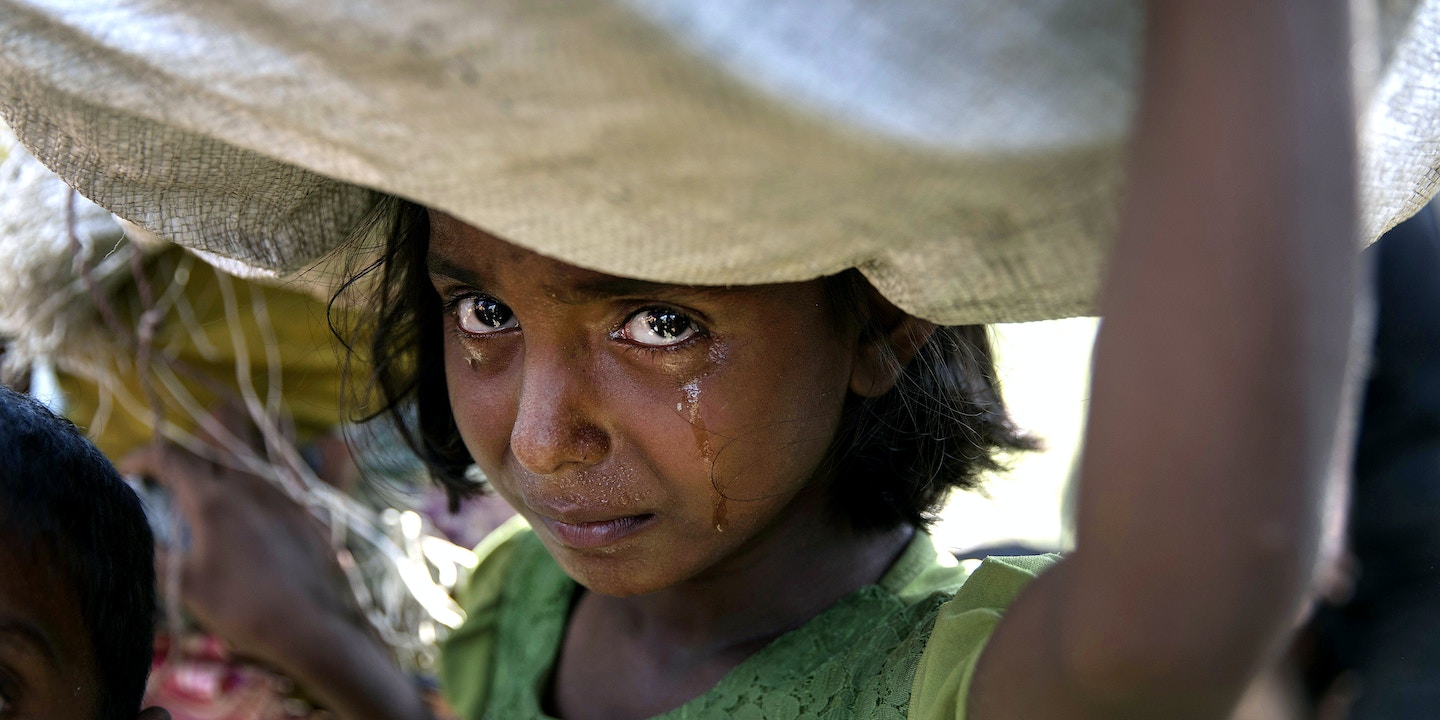 Stranded, stateless, unwanted, they are citizens of no country. Myanmar and Bangladesh toss their fate back and forth, even as Myanmar’s army makes one thing clear to every Rohingya they aren’t raping, murdering, burning, or shooting: “Get out and don’t come back.” So they flee from their villages until they reach the border of Rakhine state, their ostensible home in Myanmar.

When they can, they board boats to escape, some are so rickety they capsize, and many can’t swim across the river. Drowned children and young women wash up on the shores of Bangladesh. Sometimes an entire family is gone to the sea. You can see the nighttime devastation of families gathering their dead, washing their bodies, wrapping them in shrouds for burial, here in Paula Bronstein’s photographs.

This article includes graphic images that some readers may find disturbing. 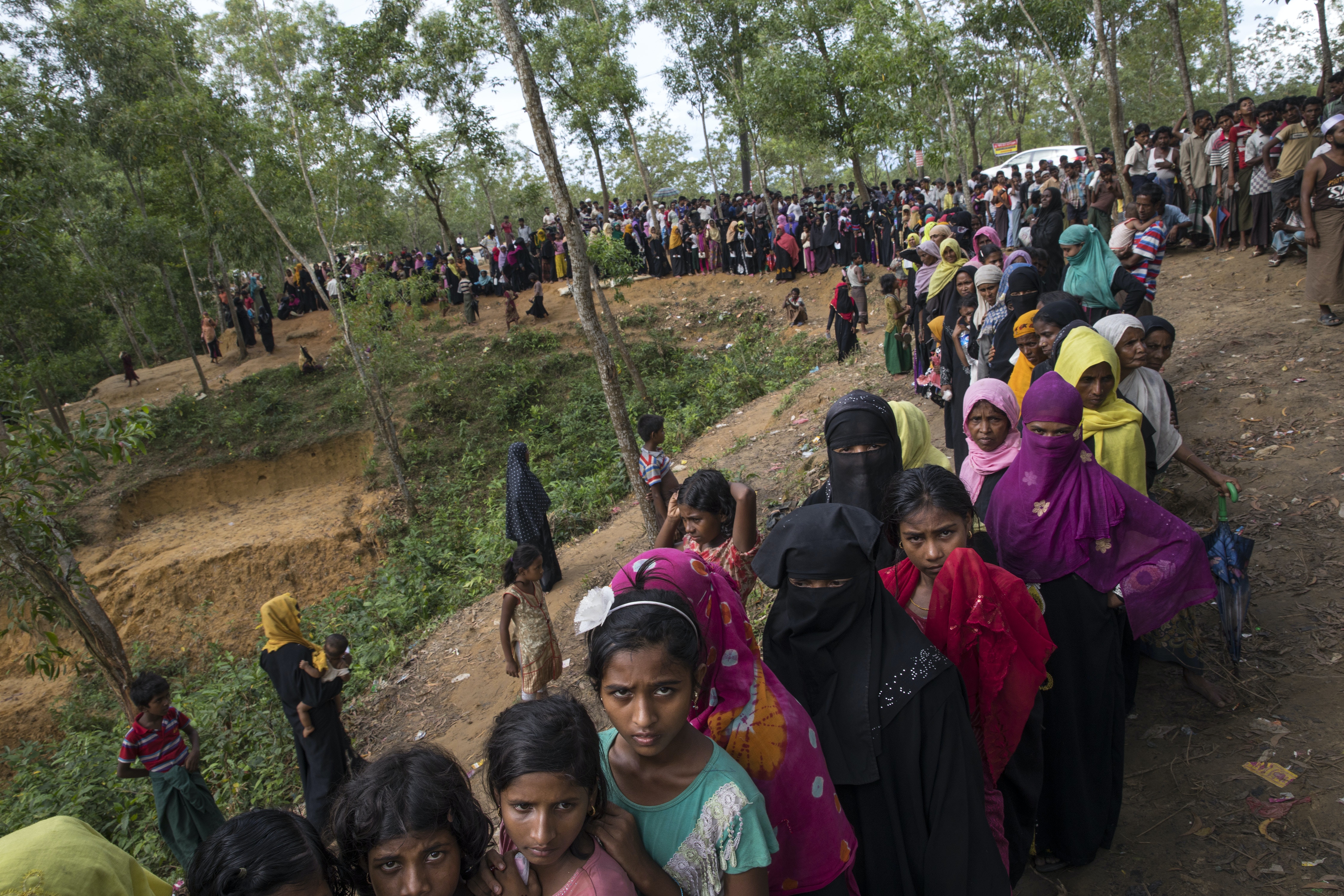 Rohingya wait in line for hours as an emergency food distribution is organized by the World Food Program and Save the Children. Rice, lentils, sugar, salt, and oil are given out, Oct. 7, Kutupalong, Cox’s Bazar, Bangladesh. 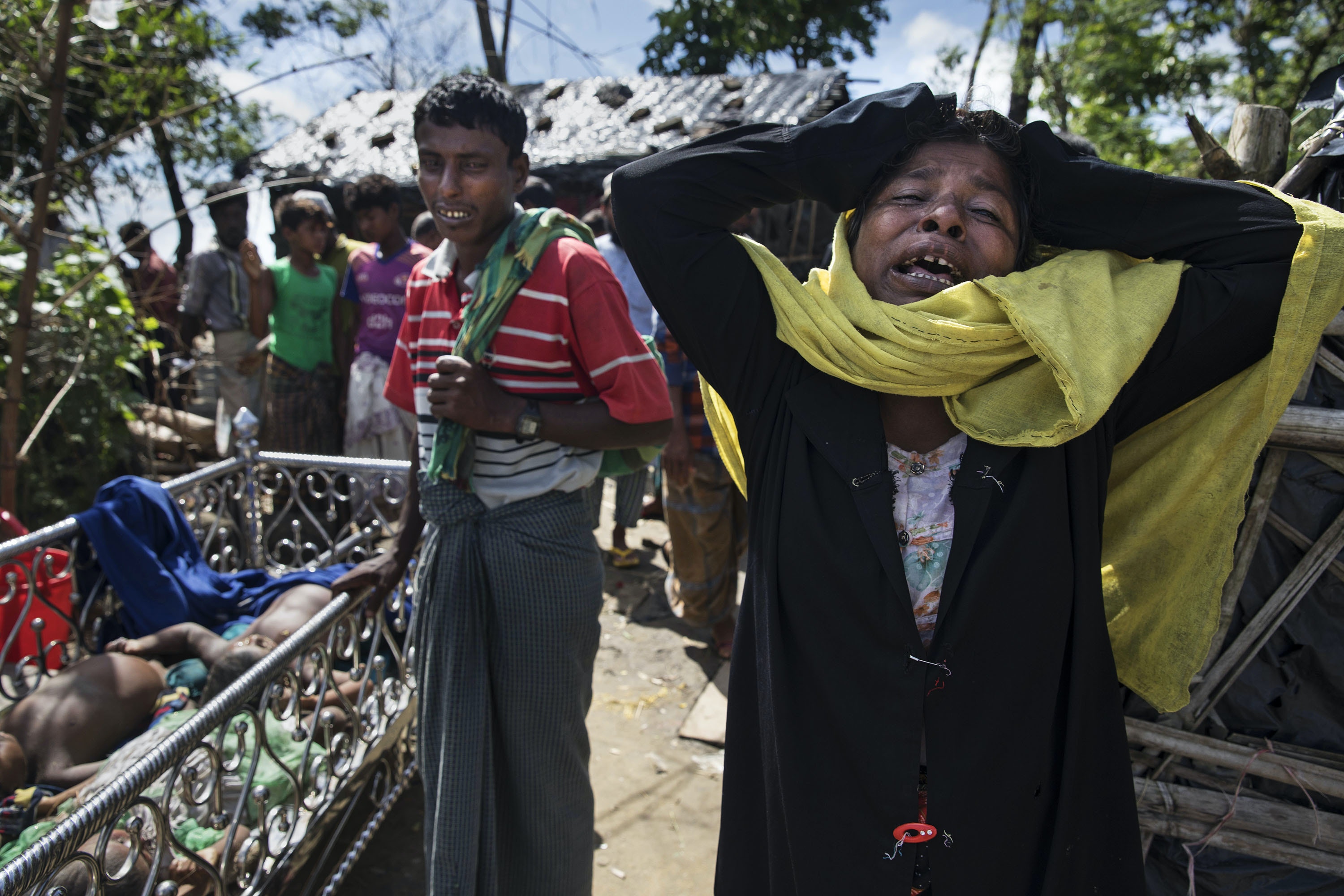 Most of the Rohingya amass in villages near Bangladesh waiting for the mysterious crossings. Photographers, fixers, aid agencies get whispers: the crossing is coming. Then suddenly, in the pre-dawn light, tens of thousands of Rohingya are on the move, wading through green, sodden, rice paddies, belongings cabbaged on the head, babies in arms, wounded on shoulders. “The faucet is turned on and then suddenly turned off,” says Bronstein, who photographed two of these monumental migrations, October 9 and October 16. Is there coordination between the Myanmar and Bangladeshi authorities? Is it a temporary solution? A permanent ethnic cleansing? Coordinated cleansing? 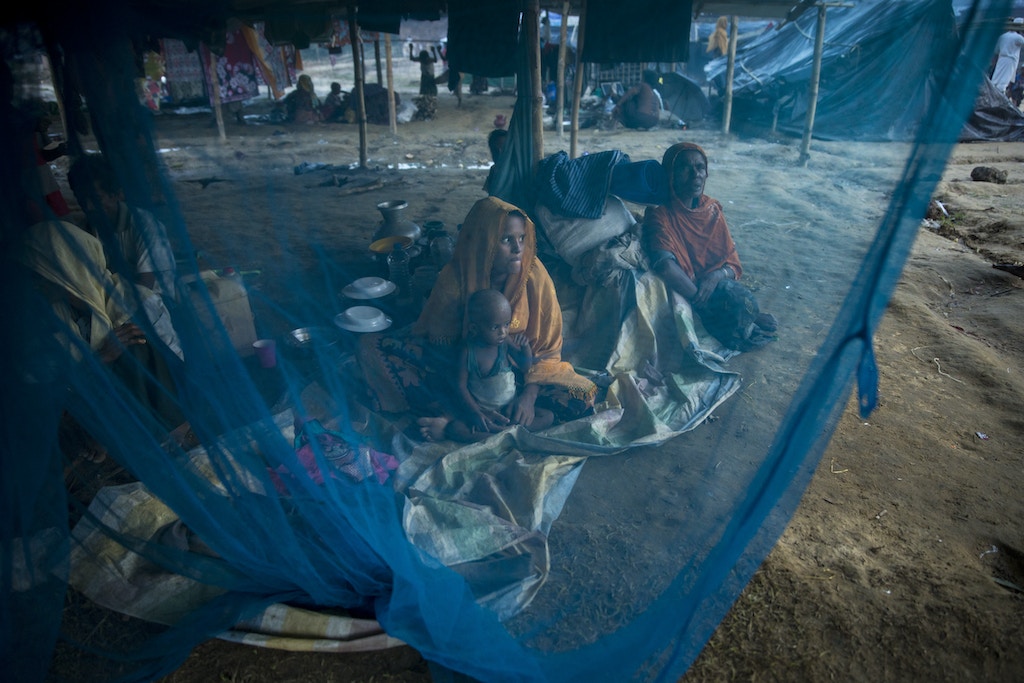 Women are seen behind a mosquito net on Sept. 29 in Kutupalong refugee camp, Bangladesh. 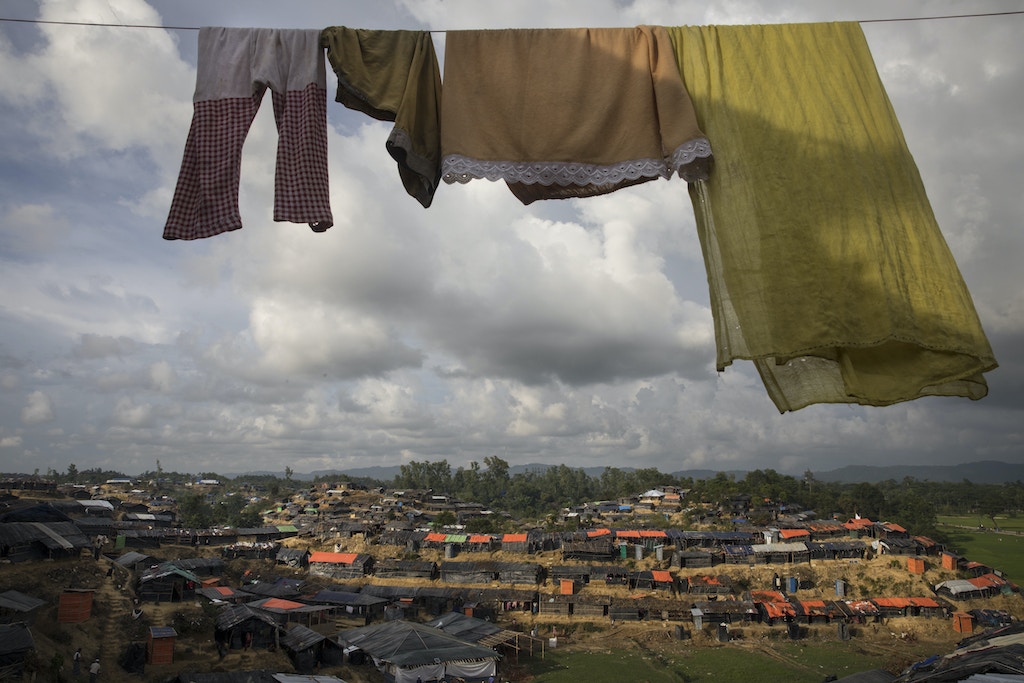 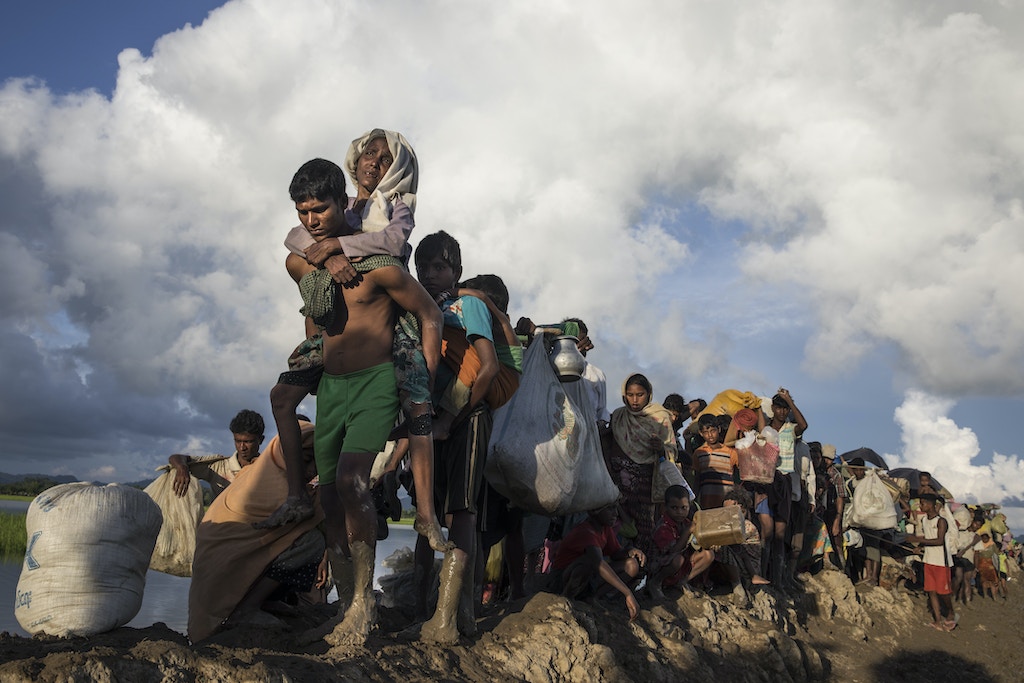 Thousands of Rohingya refugees fleeing from Myanmar walk along a muddy rice field after crossing the border in Palang Khali, Cox’s Bazar, Bangladesh.

The refugees then walk for miles inside Bangladesh. Some stop in abandoned villages, some make it to decades-old refugee camps, some are whacked with bamboo rods by the Bangladeshi border guards, ordered to stay in the fields with no idea of what’s going on, where they will end up, when it will end.

“It was outrageously inhuman. They made it to where they’d get water and biscuits from WFP [the World Food Program] and the authorities said, ‘No we’re sorry you have to go back into the field, the rice paddy.’ They were crying, especially the children, ‘These horrible Bangladeshi border guards are threatening to beat us, and we don’t know what is going on.’ They kept them for three days in muddy fields and then processed them. It was atrocious. Why they did this, I can’t get a straight answer.” 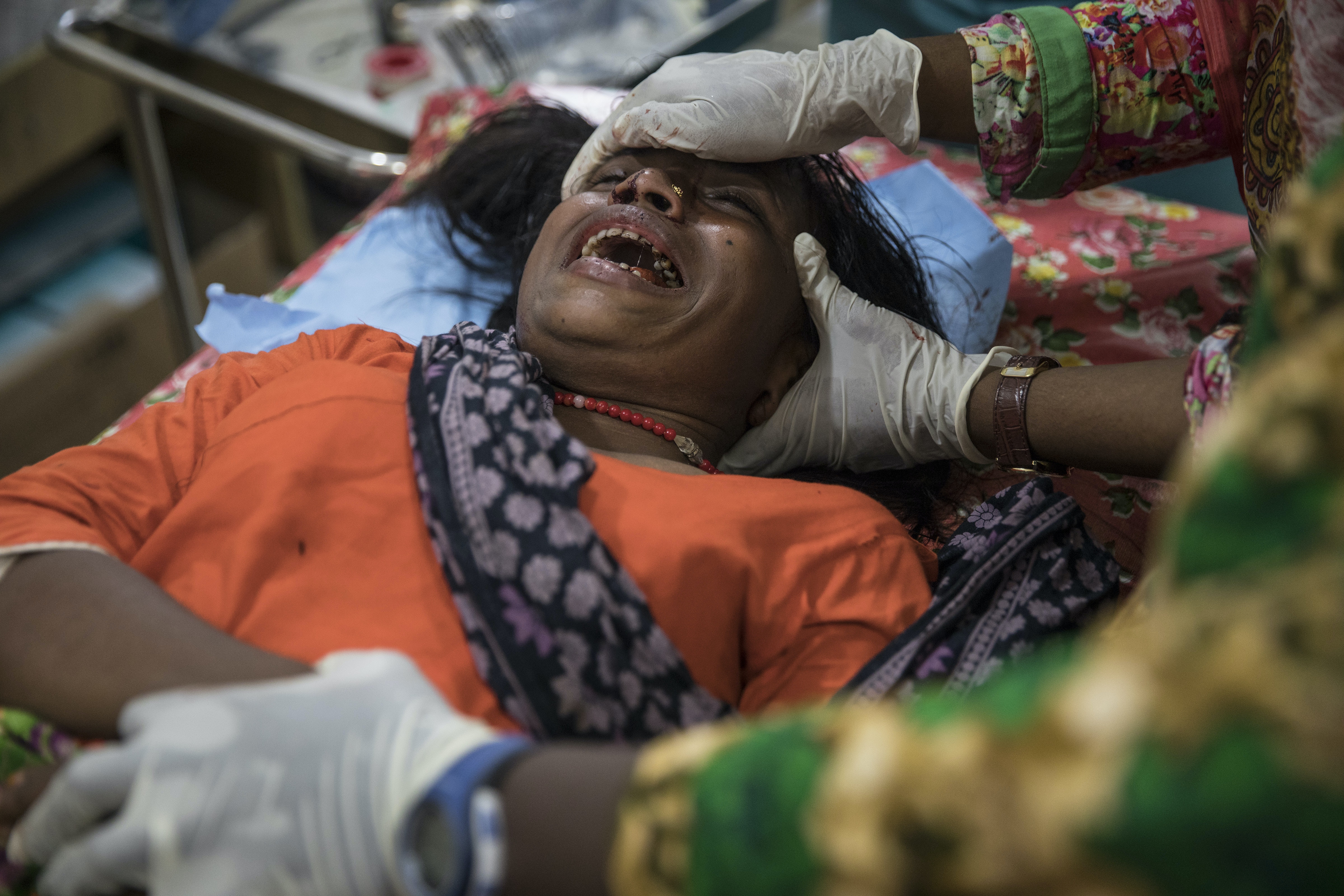 Aneta Begum, 25, is treated for a head injury by staff member Jacqueline Murekezi at a Doctors Without Borders clinic on Oct. 4, 2017 in Cox’s Bazar, Bangladesh. Doctors Without Borders has been providing comprehensive basic health care services at their Kutupalong clinic since 2009. Due to the current crisis, the clinic has expanded its inpatient capacity, dealing with approximately 2,500 outpatient treatments and around 1,000 emergency room patients per week. 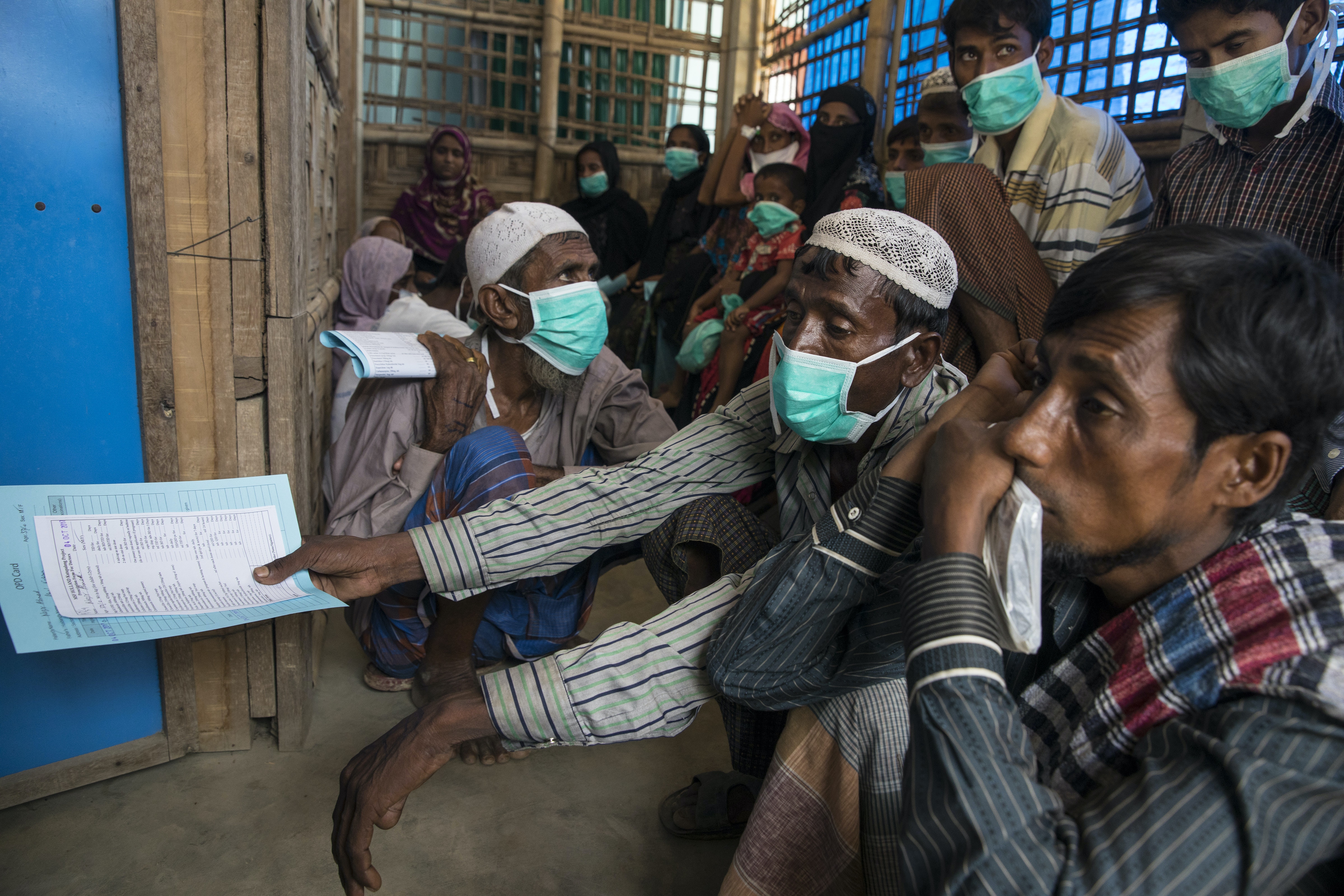 Patients wait for testing and medical treatment for tuberculosis at the Doctors Without Borders Kutupalong clinic on Oct. 4, 2017 in Cox’s Bazar, Bangladesh. It rained while they were stranded. There was nowhere to sit or sleep.

“And then the sun comes out and you get a rainbow,” Bronstein notes. “It’s beautiful, and people are in agony. Nature does funny things. There’s always beauty where people are suffering.”

Just down the road from the camps where tens of thousands of Rohingya languish, there is a beach resort where tourists take selfies, swim, and drink cocktails.

The Rohingya crisis is not new. Aid groups have provided relief in Bangladeshi camps that are decades old. The Rohingya keep coming with each new wave of violence doled out to them by the Myanmar authorities. Reports are now emerging, from clinics and those who escaped, of soldiers and Buddhist extremists slaughtering the men and dragging girls as young as 9 years old into the forest to gang rape them. Rape is one of the tools of ethnic cleansing. Burn the villages. Slaughter the men. Rape the girls. Decimate a people.

Is there any political will or authoritative moral institution that will indict anyone for war crimes? Who would bring the charges? Russia? The Chinese? They have too much at stake in Burma economically, geographically. They’ve been involved in building a new Economic Zone with an industrial park, oil and gas terminals, and a railway line all in Rakhine state, where the Rohingya reside. As for the U.S., it has far diminished influence in Asia — not to mention the world —and no credibility left with regard to human rights or internationalism. 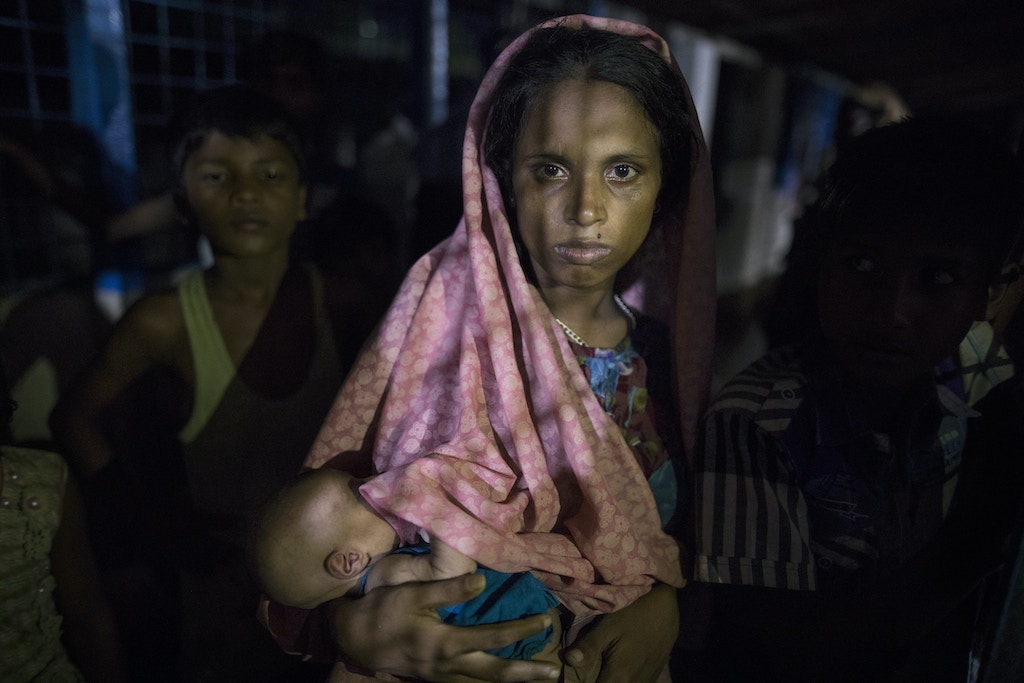 Hasina Begum, age 18, holds her newborn baby, 8 days old, born while she was walking in the forest escaping from Myanmar, Sept. 29, 2017 in Kutupalong, Bangladesh. She is now living in a makeshift shelter packed with new arrivals. 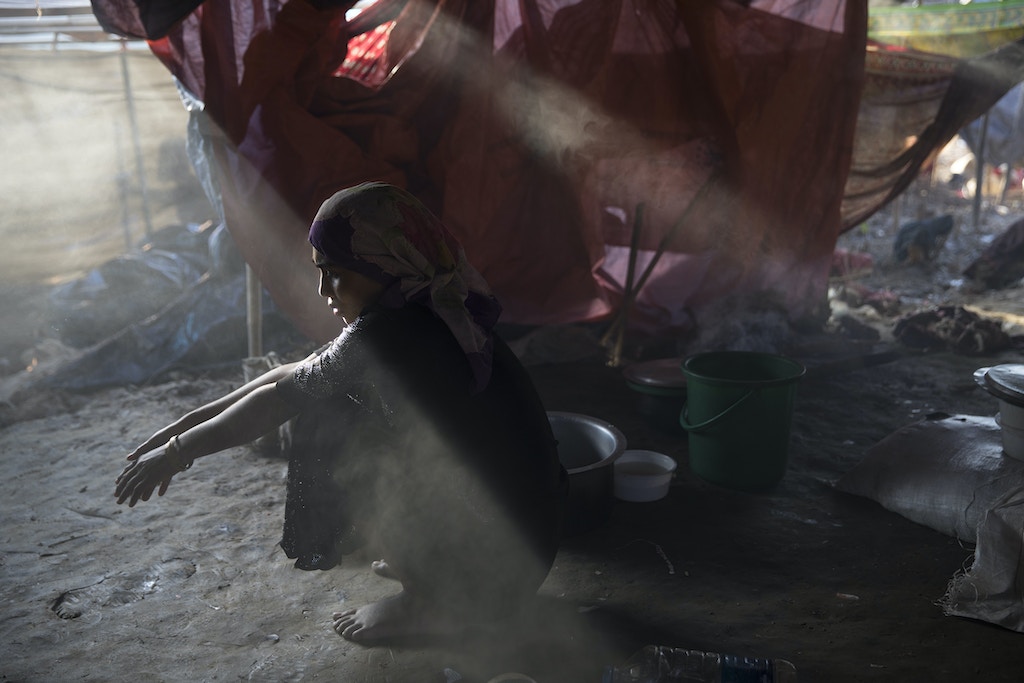 There are close to 2 million Rohingya in the world. Until recently, most lived in Myanmar for generations with their identity questioned, their history denied. Even the name Rohingya is a source of controversy. Is it an ethnic, political, or religious grouping? The best one can say is that it’s a complex identity rooted in fluctuating kingdoms, Muslim conquests, colonialism, nationalist movements, and ethnic cleansing.

Today about 4.3% of the Burmese population is Muslim. More than half are Rohingya. The 1982 citizenship law in Myanmar made it virtually impossible for Rohingya to qualify as citizens. (You had to either prove roots in Burma before 1823, when the British colonized the area, or you have to belong to one of the approved ethnic groups — which doesn’t include Rohingya). Successive Burmese governments simply call the Rohingya as Bengalis. So they have no rights to free movement, higher education, voting, or public office. They even have to get permission to marry. Since the 1970s, with each successive onslaught of violence, the Rohingya have fled to Bangladesh, where they are also given no rights and often sent back.

The ethnic cleansing of the last two months is the most severe and systematic to date. Some 600,000 people have been forced out of Rakhine state by the Myanmar army and Buddhist extremists. And so today, some 1.3 million Rohingya exist in limbo without a place on earth to call “my country.” 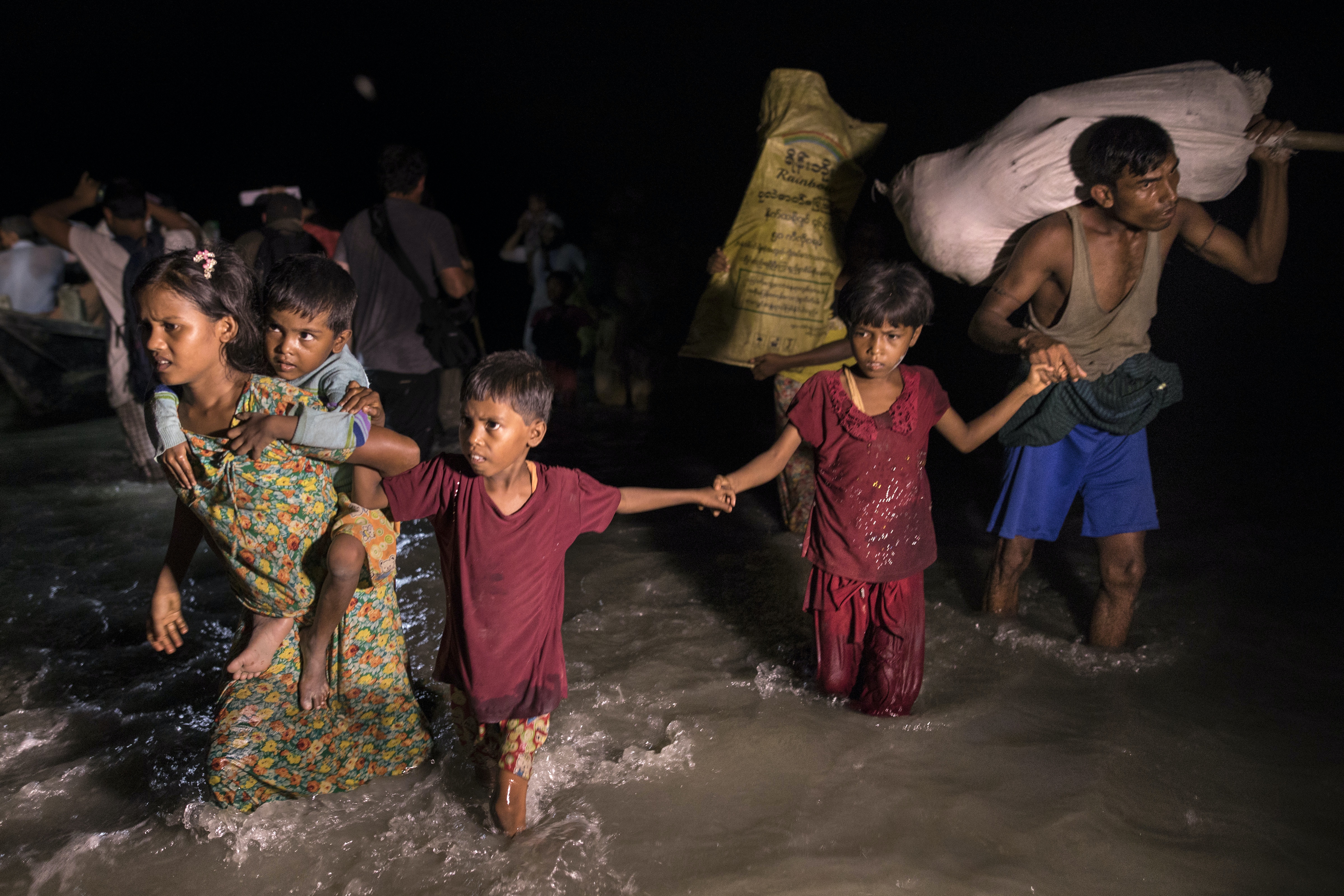 Boats full of people continue to arrive along the shores of the Naf River as Rohingya come in the safety of darkness Sept. 30, on Shah Porir Dwip Island, Cox’s Bazar, Bangladesh. 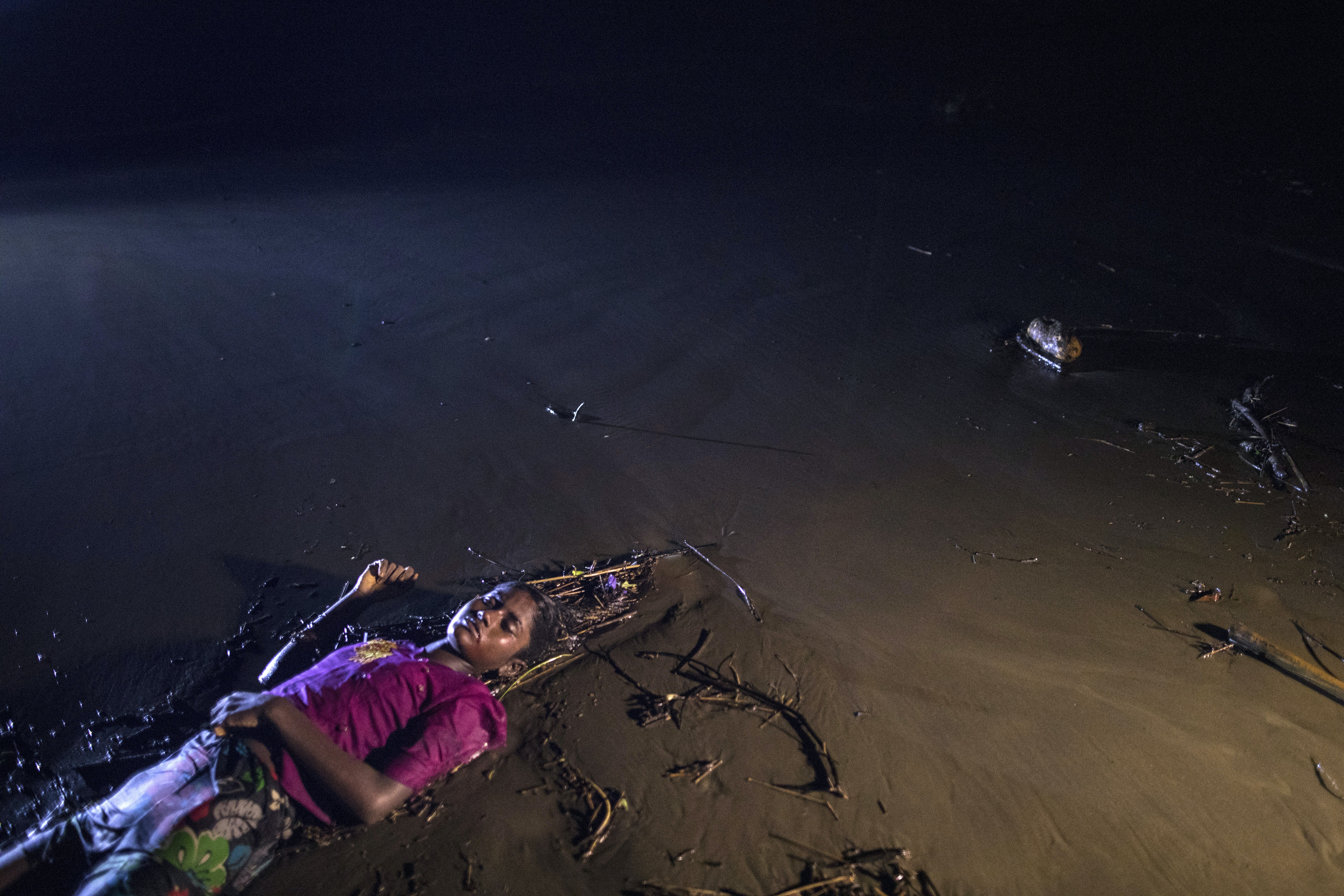 The body of a Rohingya woman lays on a beach washed up after a boat sunk in rough seas off the coast of Bangladesh carrying over 100 people Sept. 28 close to Patuwartek, Inani beach, Bangladesh. Seventeen survivors were found along with the bodies of 15 women and children. People cross a bamboo bridge over a stream as the sun sets on Oct. 13, 2017 at the Kutuplaong refugee camp, Cox’s Bazar, Bangladesh.

Text by Elizabeth Rubin and photography by Paula Bronstein. 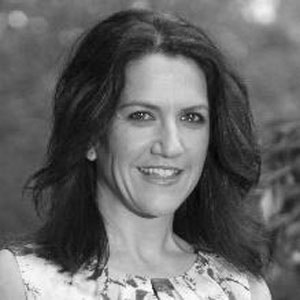