Disaster capitalism is coming to Puerto Rico’s school system, with post-Katrina New Orleans as the model. 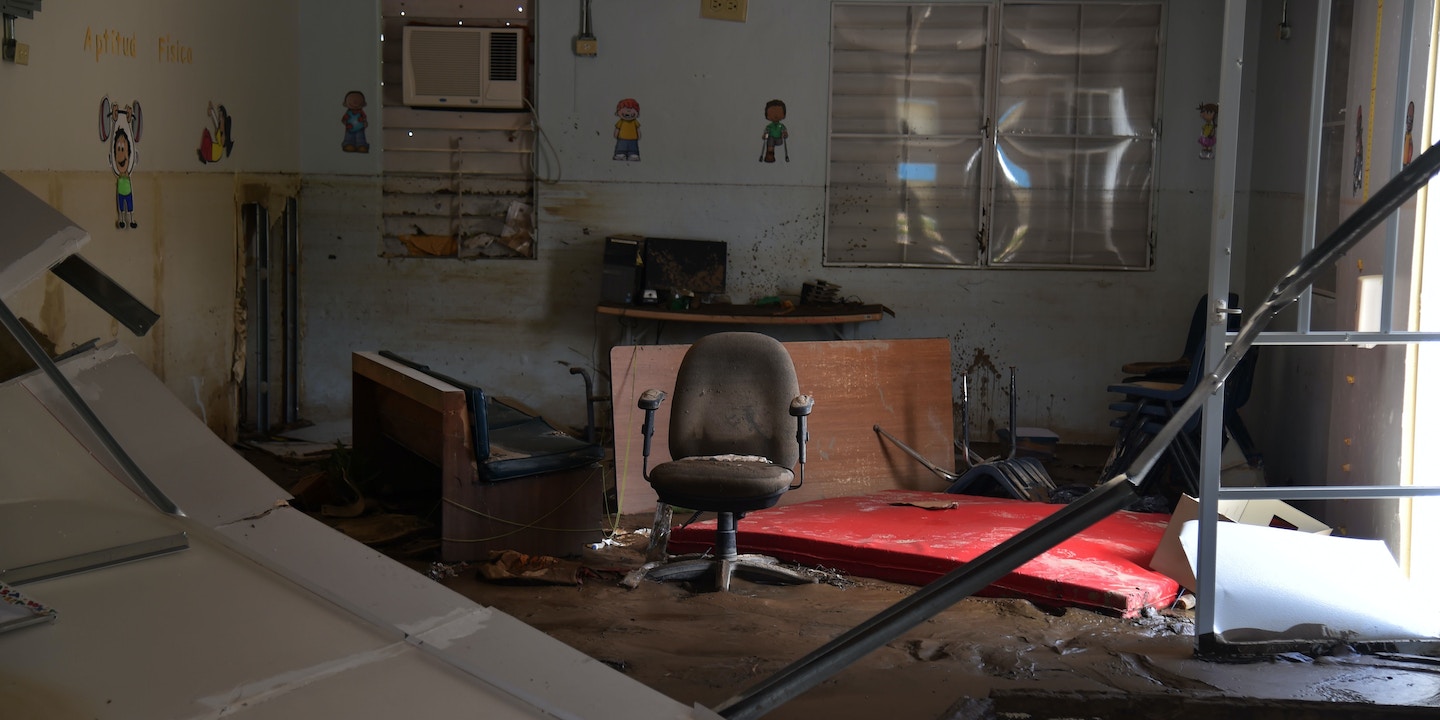 As Hurricane Maria departed Puerto Rico, leaving utter ruin in its wake, one community in Vieques picked itself out of the wreckage by focusing on getting school back open.

“The community took out of their own time and said, ‘Let’s do this, we need to repair and reopen this,’ and we started working,” Josuan Aloyo told The Intercept in Spanish. “Cleaning out the trash and debris, and trying to find people that had the proper tools.”

Aloyo, assistant director of Escuela Adrienne Serrano, said the school opened up immediately. Aloyo said they were determined to take in as many students as possible in the hopes of giving even a bit of order back to their lives.

School administrators were told they “couldn’t have students until they authorized us to open the school,” Aloyo said. “We couldn’t have classes until the firefighters certified us.”

“Ever since that moment, we didn’t listen to them. We kept receiving the students that arrived but Friday, we ran out of potable water, so we had to start turning down students,” Aloyo said. “We hope tomorrow, if we get water, we can start receiving students. Whoever shows up, we’ll receive them. If there’s no food in the cafeteria, well, we can just cook for them ourselves and make a simple breakfast and lunch.”

People in the community cleaned classrooms themselves pic.twitter.com/DULNV7V0b8

The guerrilla campaign to open schools is running headlong into a separate effort from the top, to use the storm to accomplish the long-standing goal of privatizing Puerto Rico’s public schools, using New Orleans post-Katrina as a model. Last month, Puerto Rico’s Public-Private Partnerships Authority director spoke optimistically about leveraging federal money with companies interested in privatizing public infrastructure.

Puerto Rico’s Education Secretary Julia Keleher has already called New Orleans’s school reform efforts a “point of reference” — tweeting last week that Puerto Ricans “should not underestimate the damage or the opportunity to create new, better schools.” She repeated these sentiments on Monday, saying that the aftermath of Maria provides a “real opportunity to press the reset button.”

Sharing info on Katrina as a point of reference; we should not underestimate the damage or the opportunity to create new, better schools pic.twitter.com/Fmq59W4pKF

“Of the things I need to worry about — the buildings, the poisoning from rats being around, the flooding, moving kids, transportation, sliding roads — the thing that worries me the most is that somehow I’m not going to deliver on this learning opportunity, this transformational opportunity for us to start to think fundamentally differently about what it is to be in school, and how one goes about getting an education,” Keleher told The 74, an education news site funded by charter supporters. Before her appointment in January, Keleher ran a D.C.-based management consultant firm she founded in 2009.

Jeanne Allen, founder and CEO of the Center For Education Reform, told The Intercept that after helping students in short-term emergency settings, reformers “should be thinking about how to recreate the public education system in Puerto Rico.” Allen, who was involved in the New Orleans school reform efforts, says charter operators across the country, as well as virtual education providers, should be thinking about how they can get involved in Puerto Rico’s post-Maria landscape.

Juana Colon High School flooded with water up to the roof. People in the community cleaned out the inside themselves pic.twitter.com/8YJahDhjaO

Allen says few education reform groups have yet tackled this topic directly. “We really thought there would be a much larger conversation going by now, and so far, it seems to be limited to the grasstops, not the grassroots,” she said, referring to Keleher talking with state departments of education.

For the island’s 347,000 students, their concerns are more immediate. All 1,113 schools across Puerto Rico shut down after the hurricane, and as of Monday, 598 were still closed; 200 of those don’t have water, and 43 are badly damaged. Thousands of students and teachers fled to the mainland in the storm’s aftermath, and though teachers have until January 8 to return and reclaim their jobs, nobody knows how many actually will.

Puerto Rico’s Department of Education gets to determine which schools reopen, but the process has been anything but transparent. Public school advocates fear that the Department’s refusal to open habitable schools foreshadows permanent closures and school privatization. The department has already estimated up to a fifth of schools will never reopen.

Following Hurricane Katrina in 2005, Louisiana lawmakers granted the state’s so-called Recovery School District authority to take over underperforming New Orleans public schools. More than 100 schools were converted to charters, which are publicly funded and privately managed. Today, New Orleans is the only city in the nation to have a school system comprised almost entirely of charters.


In the back of a pickup truck driving around Vieques

“I suffer for the trees” a local told me pic.twitter.com/ncZObbJBLY

Doug Harris, an economics professor at Tulane University and director of the Education Research Alliance for New Orleans, described the storm as creating “a political vacuum for a few powerful leaders to step in” and revamp the school system, which “wasn’t really a community decision.” (Harris’s research shows the city’s schools have improved over the last decade, in part by increasing school funding)

Ana María García Blanco, executive director of Instituto Nueva Escuela, a nonprofit focused on expanding Montessori schooling in Puerto Rico, is worried about how the slow return to school will impact students. She says all the talk of school privatization concerns her, and, like other advocates, she feels frustrated with what she describes as the “callousness” of school reformers.

“The school department should now be a source of relief and of acompañamiento for the community,” García Blanco told The Intercept. “We should not be talking about how we can save money in schools or restructure schools or using the money in a better way. The question is, how can we serve our children so they can go back to a normal day?”

Accessing food remains difficult, especially in the central and southeastern parts of the island where the hurricane hit hardest. García Blanco wants schools to open not only to give children the education they’re entitled to receive, but also to help serve food during the crisis. Pile of textbooks and debris outside of Escuela Superior Juana Colon in Comerío, Puerto Rico on Oct. 27, 2017.

Lulú Arroyo, an assistant to the executive director of Instituto Nueva Escuela, fears Puerto Rico’s Education Department is purposefully putting off opening of schools to justify permanent closures down the road.

The department has not clearly defined its criteria for determining whether a school is ready to open. As a result, frustrated community members and public school advocates have blasted the department for what they consider a blatant lack of transparency.

But Keleher told The Intercept that the company contracted to conduct school inspections, CSA Group, had “no explanation for why schools weren’t being turned around.” She said the company was slow going through the process and not providing the information the department needed, adding that everyone’s frustration “leaves her in the middle to explain.”

For a school to be reopened, according to the department, the U.S. Army Corps of Engineers must first inspect it. To pass inspection, a school must be cleaned, repaired, and disinfected. In many cases, this work has been done entirely by teachers and community members.

Last week, the Asociación de Maestros de Puerto Rico, the island’s American Federation of Teachers affiliate with 40,000 members, called for greater transparency over school inspections. The teachers union also demanded transparency over the terms of the contract established between the Puerto Rican government and CSA Group.

On Friday, after Asociación de Maestros de Puerto Rico raised the alarm, the government canceled its contract with CSA Group, a company that had been investigated in the past for conflicts of interest. “We are looking for more effective and faster alternatives,” said Puerto Rico’s governor, Ricardo Rosselló.

A representative from CSA Group did not return The Intercept’s request for comment.

“Now that our schools have cleaned, like the school staff and the community has helped clean the schools, the government hasn’t gone there [to inspect],” Arroyo said. “Usually an engineer comes, they do an inspection. Our suspicion is that the longer it takes to reopen the school, the more of a reason they’ll have not to open the schools, and then more people keep leaving Puerto Rico to find a school for their kids in the U.S.”

According to Arroyo, the majority of public Montessori schools still haven’t been inspected. And while the Education Department has been telling school leaders they can’t open their schools because they aren’t ready yet, many of those same schools have been used as community centers to assist Puerto Ricans displaced by the storm.

“The Department of Education is saying, ‘Oh, you can’t open your school because it’s not ready,’ but it is ready, and if it can be used as [a community center], why can’t it be used for its normal operation?” Arroyo said. “There’s no good reason for it, no real humanitarian reason. If you’re actually looking out for the students and their families , then you’d let them open the schools. … Why aren’t they doing it?”

Juan Agosto-Alicea, the former Puerto Rico secretary of treasury, told The Intercept that the Education Department’s plan is to reopen schools by “region” rather than individual school. A region could include up to 10 or 15 towns.

“Make the decision [to reopen] by school,” Agosto-Alicea argued. “If the school is ready, the director says it’s ready, then let’s go. You know why? Because these people, they may not have food on the table. And they don’t do anything during the day, we bring them here to the school, they have breakfast, they have lunch, and they are with the other kids. I think it would really help the community. Otherwise we have to wait one or two months until the whole region is ready?”

Keleher confirmed the department is opening schools by region, saying that on October 23, schools in Bayamón opened, and last week schools in Ponce did too.

Yet some schools have been operating without authorization, desperate to restore order and provide children with food and learning opportunities.

“We’re reopening the schools without permits or anything,” Arroyo said. “The department doesn’t really have a reason not to let us open if the schools are already open. …We don’t really know what’s their agenda, but our mission is for all schools to open as soon as possible.”

This story originally reported that New Orleans is now entirely dominated by charter schools. In fact, there are still a handful of traditional schools.