U.K. Foreign Secretary Boris Johnson calls the Iran deal “a great achievement,” but he just handed ammunition to hard-liners in Iran who want to scuttle it. Last month, when Trump dismissed evidence that Iran is complying with the terms of the deal and called on Congress to scuttle the agreement, Johnson called it “a great achievement of U.K. diplomacy” and pledged to work “with our American friends” to ensure that “any new measures against Iran do not disrupt, do not invalidate that Iran nuclear deal.”

Johnson’s mission has been complicated, however, by the fact that he did considerable damage to Britain’s own diplomatic relations with Iran last week, when he referred incorrectly to the case of a British citizen who has been in jail in Tehran for 19 months.

Appearing before a parliamentary oversight committee last week, Johnson was asked if he would go to the Tehran prison where Nazanin Zaghari-Ratcliffe, an Iranian-born Briton, has been detained since April 2016, at the end of a trip to introduce her baby daughter to her Iranian grandparents.

Iran’s hard-line judiciary, which refuses to recognize dual citizenship, accused Zaghari-Ratcliffe of plotting to overthrow its theocratic government through her work for a charity, the Thomson Reuters Foundation, which provides mentoring and training to journalists in the developing world. She was convicted and sentenced to five years in jail last year. The authorities have refused to permit her husband, Richard Ratcliffe, to visit her or their daughter Gabriella, who is in the custody of her grandparents.

In his reply, Johnson, whose studied air of nonchalance conceals infinite layers of carelessness, mistakenly said that Zaghari-Ratcliffe, an administrator who is not a journalist, had been in Iran on business.

“When you look at what Nazanin Zaghari-Ratcliffe was doing, it’s just, you know, she was simply teaching people journalism, as I understand it,” the foreign secretary said.

The error troubled Zaghari-Ratcliffe’s husband, Richard, and the chief executive of the Thomson Reuters Foundation, Monique Villa, who pressed the foreign secretary to admit his mistake and correct the record.

Before he could do that, however, his comment was picked up by hard-liners in Iran, who oppose rapprochement with the West and the nuclear deal, and used against the political prisoner.

On Saturday, the Iranian expatriate news site Iran Wire reported, Zaghari-Ratcliffe was taken from her prison cell to a courtroom in Tehran and confronted with new charges of “propaganda against the regime.” If found guilty, she could face many more years in jail.

One day later, an Iranian judiciary website reported Johnson’s comment as proof of the aid worker’s guilt. Under the headline, “UK Confirms Nazanin Zaghari-Ratcliffe Was Not in Iran for Holiday,” the Iranian site claimed that Johnson’s statement “shed new light on the realities about Nazanin,” showing that she “had visited the country for anything but a holiday.” 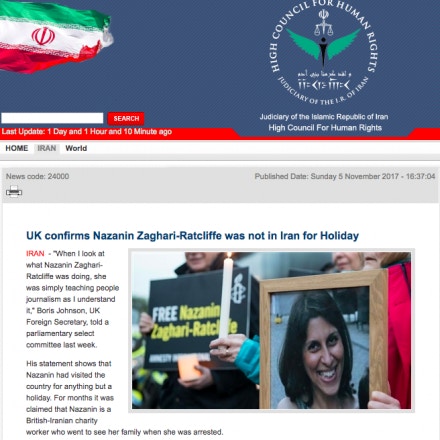 The prospect of a British citizen spending additional years in jail because of a misstatement by the nation’s top diplomat led to calls in Parliament for Johnson to be fired. “We are all bound to ask,” Emily Thornberry of the opposition Labour Party said on Tuesday, “how many more times does this need to happen?”

Thornberry went on to observe that Johnson’s error was only the latest in a series of off-the-cuff remarks that have caused difficulties or offense. During the Conservative Party conference last month, for instance, Johnson said that the Libyan city of Surt could soon rival the free-trade hub of Dubai. “The only thing they’ve got to do,” he joked, “is clear the dead bodies away.”

Oct 3: Boris Johnson on Libya, "the only thing they've got to do is clear the dead bodies away." @AnastasiaZaw video https://t.co/m05M49Rsz5

When Johnson was confronted on Tuesday in Parliament with the possible impact his comments could have on Zaghari-Ratcliffe’s sentence, he steadfastly refused to admit that he had made any error, saying only that his remarks “could have been clearer.”

“I’m sorry,” the foreign secretary added, “if any words of mine have been so taken out of context and so misconstrued as to cause any kind of anxiety for the family of Nazanin Zaghari-Ratcliffe.”

Johnson’s puzzling refusal to acknowledge his mistake ensured that questions followed him across the Atlantic to Washington on Wednesday, where he continued to dodge them.

"I am very happy to meet the family of Mr Ratcliffe."

Foreign Secretary Boris Johnson says he is willing to meet the family of a British-Iranian woman jailed in Iran, after he was criticised for his comment to MPs about the imprisonment of Nazanin Zaghari-Ratcliffe. pic.twitter.com/AouFWgpK9S

If, however, Johnson was hoping that the resignation of another member of Prime Minister Theresa May’s cabinet, foreign aid minister Priti Patel, would relieve the pressure on him, hard-line opponents of the nuclear deal in Iran had other ideas.

On Wednesday night, an Iranian state news program reported that the foreign secretary’s comments had caused an uproar in Britain only because they were “an inadvertent confession” of Zaghari-Ratcliffe’s role in a British “plot” uncovered by Iran’s Islamic Revolutionary Guard Corps.

#Iran stateTV welcomes @BorisJohnson's remarks ab Nazanin Zaghari-Ratcliffe (@FreeNazanin) as an "unintended confession of the UK gov ab the real plot” behind her trip to Iran & a “proof” of #IRGC's accusations against her.” via @NarimanGharib pic.twitter.com/ZaC1T8EVqA