Congress is debating how to legalize people brought to the U.S. as minors. Those people want a say. 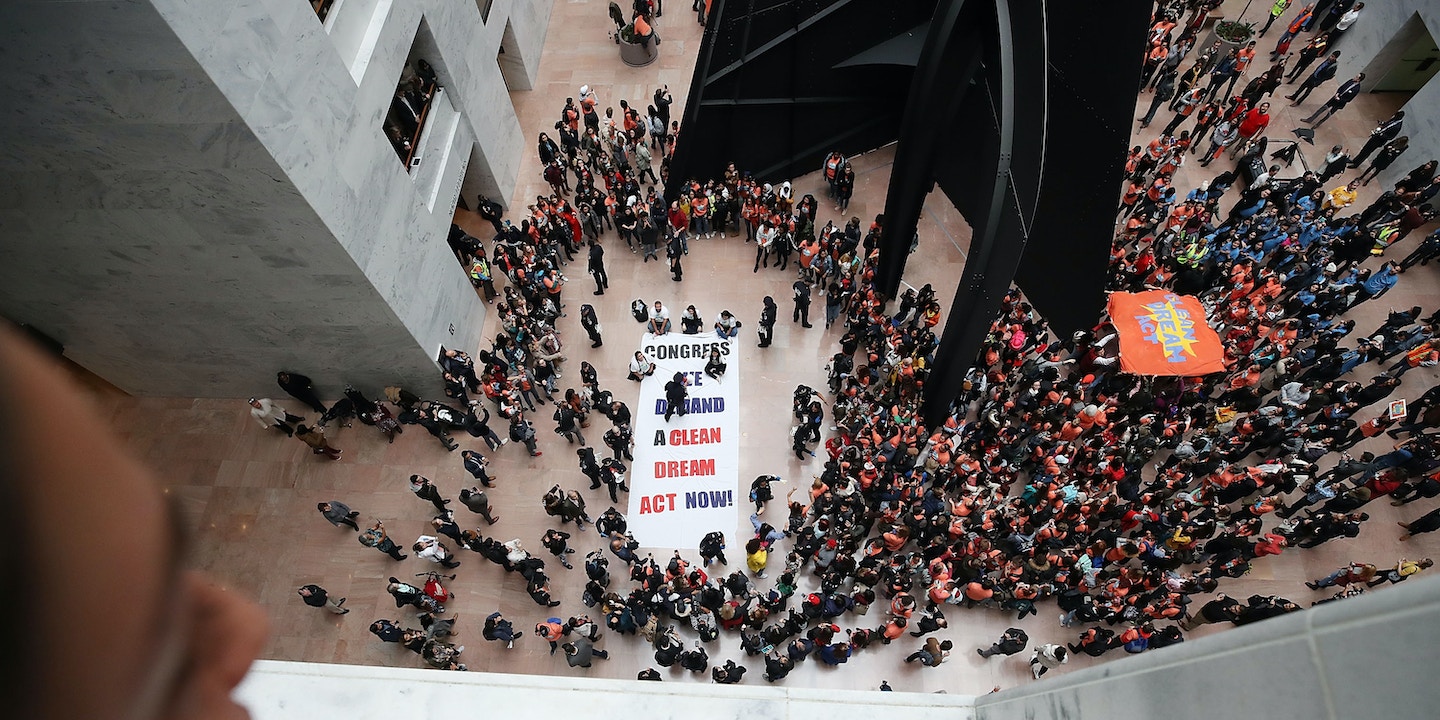 Over 1,000 Dreamers on Thursday marched to the Capitol and gathered at the Hart Senate Office Building, demanding Congress pass a clean DREAM Act by December. The demonstration in Washington was part of United We Dream’s “Here to Stay” Day of Action, which sparked staged walkouts and rallies nationwide.

Hundreds of youth walked out of their classrooms today and are packing the halls of Congress RIGHT NOW to demand the #DreamActNOW pic.twitter.com/N3Qs8FjEom

“We are here, we have 1,000 Dreamers and allies from around 20 states that were asking Republican leadership and Congress in general to provide a pathway to citizenship in the DREAM Act to all the DACA-eligible youth that were affected by the Trump administration’s decision,” protester Isaias Guerrero said. “We are sending a clear message that we want the DREAM Act passed now, a clean DREAM Act, and for it to be before December.”

Some protesters were arrested by Capitol Police during the chants in the Hart Senate building, and Ainta Zea, a student at American University in Washington, D.C., said she was “right next to people who were getting arrested.”

Defeaning in the Hart Senate office building as DREAMers take over the atrium in protest. “Like a football game,” police officer says. pic.twitter.com/Pb9WdFYpGy

“Literally all they were doing was chanting, and they had a big poster that said, ‘We demand a clean DREAM Act now.’ So it was the most petty reason to get arrested, and it shows that the police force only serves in the interest of the state and not the people. Time and time again, you keep seeing this happen, even today,” she said.

So far, 25 House Democrats are threatening to withhold votes from various budget bills if Congress fails to pass clean DREAM Act legislation that is not attached to border security or Trump’s wall.

“Both of my parents are Nicaraguan refugees, my dad came here in 1977, and my mom came here in the mid ’90s,” Zea said. “Growing up, I remember seeing these commercials about immigration, and at the time my mom still wasn’t a legal U.S. citizen. I was too young to understand, but I still felt that anxiety and that fear.”

She said she was protesting because it’s an issue that continues to affect her, the ones she loves, her family members who are undocumented today, and students she works with who are DACA or temporary protected status recipients. (TPS delays deportation if conditions at home are too inhospitable.)

“I think we need to also acknowledge, for instance, how a lot of the immigrants who are here today are here because of U.S. neo-imperialism and U.S. intervention in nations where maybe they should’ve stayed out of it, and they caused this really big dismantling,” she added.

“I wish they understood why people came here to begin with,” she said. “They need to understand that people don’t necessarily come here because it’s like, ‘Oh I really, really wanna come here.’ They come here because the conditions back home are so abhorrent that they have no other choice, and if you keep pushing and pushing a community, don’t be shocked when you see a turnout like this. And don’t try to silence us and say we can’t clap or we can’t chant. Is it really a representative democracy if you aren’t even willing to listen to its people and constituents?”

Top photo: Dreamers fill the halls and atrium during a protest inside of the Hart Senate Office Building on Nov. 9, 2017 in Washington, D.C.