BlackRock, JPMorgan, and Wells Fargo have invested in border wall construction, despite CEOs distancing themselves from Trump’s anti-immigration rhetoric. Much of the discussion on President Donald Trump’s border wall has focused on its cost and impracticality, as well as the anti-immigrant and racist rhetoric it embodies. Little attention, however, has been paid to who specifically might profit from building the structure.

Earlier this year, U.S. Customs and Border Protection chose six companies to build prototypes for the wall in both concrete and “other materials” — and last month they unveiled eight different proposals, the closest this administration has come to fulfilling its signature campaign promise. All but one of the companies that built prototypes are privately held, but a close look at Sterling Construction Company, a publicly traded company based in Texas, suggests that even investors who have distanced themselves from the president’s immigration policies are eager to cash in should the wall actually come to pass.

A report on Sterling’s Wall Street investors, published today by a coalition of advocacy groups, warns of the “growing alignment” between the financial elite and the nationalist right-wing, and argues that Trump’s policies are not just a reflection of hard-line nativist ideology, but also of the economic and financial interests of beneficiaries that have largely been able to deflect scrutiny.

“Lacking from the public narrative is that corporate billionaires stand to gain the most financially,” Nikki Fortunato Bas, executive director of Partnership for Working Families, told The Intercept. Other groups in the coalition include the Center for Popular Democracy, Make the Road New York, and New York Communities for Change.

As the report notes, Sterling’s stock value has already soared by 65 percent since the company was picked to develop a prototype for the wall at the end of August. Estimates for the wall’s cost vary widely, with some reports calculating that it will soar as high as $70 billion (plus $150 million a year in maintenance), others putting the number at $27 billion to $40 billion, and the president promising a much cheaper $12 billion. This combination of pictures shows the eight prototypes of President Donald Trump’s U.S.-Mexico border wall being built near San Diego, in the U.S., seen from across the border in Tijuana, Mexico, on Oct. 22, 2017.

This summer, the House of Representatives allocated $1.6 billion to start the wall’s construction — and Trump has promised to shut down the government to secure funding for the rest. “Believe me, if we have to close down our government, we’re building that wall,” he said in August. Last month, the House Homeland Security Committee approved a border security bill that includes $10 billion for the wall.

Despite Trump’s repeated claims, that money will come from taxpayers’ pockets, not Mexico. But whatever the final price tag, Wall Street is ready to cash in. While details on the other bidders are harder to get, scrutiny of Sterling’s shareholders reveals that investors across the political spectrum are betting on the wall.

Private equity firm BlackRock — headed by longtime Democrat donor Larry Fink — is the largest investor in Sterling, owning nearly 8 percent of its stock as of November 1. Between March and June of this year, as Sterling prepared to bid on the prototype contract, BlackRock increased its investment in the company by 195 percent. Meanwhile, JPMorgan Chase, whose CEO Jamie Dimon has spoken critically of Trump’s immigration policies, invested in Sterling for the first time over that period.

“What a coincidence,” said Ana Maria Archila, co-executive director of the Center for Popular Democracy. “If you look at the investments in this particular company, you see how there is a very clear, intentional positioning to benefit from the building of the wall and by extension, from the policies that criminalize and punish immigrant families and cause tremendous amounts of suffering.”

Some of Sterling’s largest investors have made no secret of their ideological alignment with Trump. Two of the firm’s five largest stakeholders are investment firms: Dimensional Fund Advisors LP, whose co-founder Rex Sinquefield is an activist donor to conservative causes and an outspoken opponent of the income tax, and Renaissance Technologies, headed by Robert Mercer, who was instrumental to Trump’s election and whose other investments include the millions of dollars he has poured into Breitbart News. (Mercer has recently announced he is stepping down from his firm and selling his Breitbart shares to his daughters, citing “personal reasons” for his decision and writing that while he has “great respect” for Breitbart chair Steve Bannon, their political decisions “do not always align.”)

Mercer and Sinquefield’s investments, at least, are consistent with their politics.

But investors in Sterling — and Trump’s immigration policies — also include some who have sought to publicly distance themselves from the president and his anti-immigrant positions.

Fink, BlackRock’s chair and CEO, had staked high hopes on a Hillary 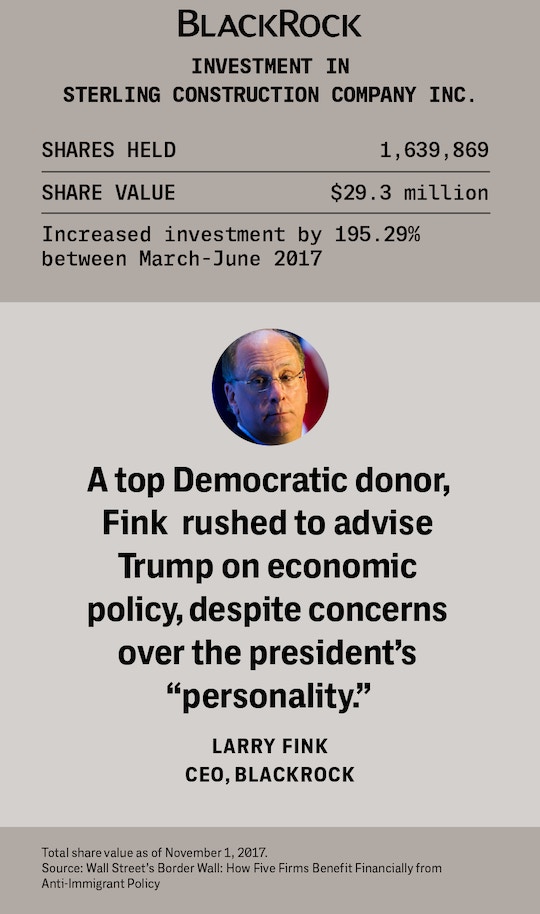 Clinton victory. Since the election, Fink has sent mixed messages about his views of Trump, saying that the president’s economic policies represented a “bucket list of things we’d like to see done” — but adding, “You can’t take personality out of the debate.”

Despite reservations he might have had about Trump’s “personality,” Fink was one of several executives who rushed to advise him on economic policy by joining the president’s Strategic and Policy Forum.

In August, Trump abruptly disbanded the forum and a parallel Manufacturing Jobs Initiative after several members of the latter resigned in protest of his response to the racist violence in Charlottesville, Virginia. Fink was late to criticize Trump over his remarks and did not publicly declare his intention to resign from the advisory group until the president announced its dissolution.

Neither did Dimon, JPMorgan’s CEO and another longtime Democrat donor who had joined Trump’s economic forum.

Dimon has been publicly critical of Trump’s immigration policies and opposed his decision to end the Deferred Action for Childhood Arrivals program, which puts 800,000 young people brought to the U.S. as children in limbo and at risk of deportation. (Trump and GOP leaders have indicated they would make funding the wall a condition of extending protections for Dreamers.)

“America is and always has been a country of immigrants,” Dimon said in response to Trump’s DACA decision. “And, when people come here to learn, work hard, and give back to their communities, we should allow them to stay in the United States.”

In an April letter to shareholders, Dimon also listed “anti-trade and anti-immigration positions” as a liability for banks. “We have always supported proper immigration — it is a vital part of the strength of America,” he wrote, adding that he found the number of skilled immigrants forced to leave the country “alarming.”  “We are forcing great talent overseas by not allowing these young people to build their dreams here.”

While he never mentioned the wall in the letter, Dimon called Mexico “a long-standing peaceful neighbor” and noted that “there are now more Mexicans going back to Mexico than coming into the United States.”

Still, Dimon was careful not to go too hard on the president. His letter to investors never mentioned Trump and at a May meeting with shareholders, he chose diplomacy over a firm rejection.

Most tellingly, as Dimon sought to portray himself as a moderate on immigration, JPMorgan went from owning zero to 145,200 shares in Sterling — nearly 1 percent of the company.

Tim Sloan, president and CEO of Wells Fargo, was also critical of Trump ending DACA, joining tech executives who wrote to the president urging him to protect Dreamers. “Dreamers are vital to the future of our companies and our economy,” said the letter, which Sloan signed along with more than 800 industry leaders.

BlackRock, JPMorgan, and Wells Fargo did not respond to The Intercept’s requests for comment.

“People like Jamie Dimon and others have been tepid in their rebuttal of Trump’s anti-immigrant policies,” she said. “And they have been tepid because they stand to benefit.”

“We think it’s important to smoke them out,” she added. “We can’t allow them to go unnoticed when they are propping up and legitimizing a white nationalist president.”

The border wall remains largely unpopular with the public.

“[It] is really the only thing that the Trump administration has been pushing concretely in terms of infrastructure,” said Bas.

In fact, what’s also getting a boost from Trump’s anti-immigrant policies is the already sprawling private prison industry, with giant prison companies like CoreCivic and GEO Group seeing their value soar amid the continued expansion of immigration detention.

BlackRock, Renaissance Technologies, Dimensional, JPMorgan, and Wells Fargo all own stock in either CoreCivic or GEO Group. In May, Dimon promised investors he would “look into” JPMorgan’s involvement with private prisons, but since then the bank has increased its stock in both companies.

Jonathan Cortés, a member of Make the Road New York, spent more than two months in a CoreCivic detention center where he spent a week without air conditioning in the Arizona summer and where detainees were denied medical care.

“It’s so sad to me that the same companies that are financing private immigration detention centers, like the one where I was held in Arizona in terrible conditions, are also putting their money toward Trump’s racist wall project,” he said. “It seems to me that these companies and their CEOs just don’t have a heart — and that, instead of caring about our communities, they prefer to benefit from an anti-immigrant agenda.”

Top photo: People pass border wall prototypes as they stand near the border with Tijuana, Mexico, on Oct. 19, 2017, in San Diego.