“Three Billboards Outside Ebbing, Missouri” Is the Dark Comedy for the Age of Criminal Justice Reform 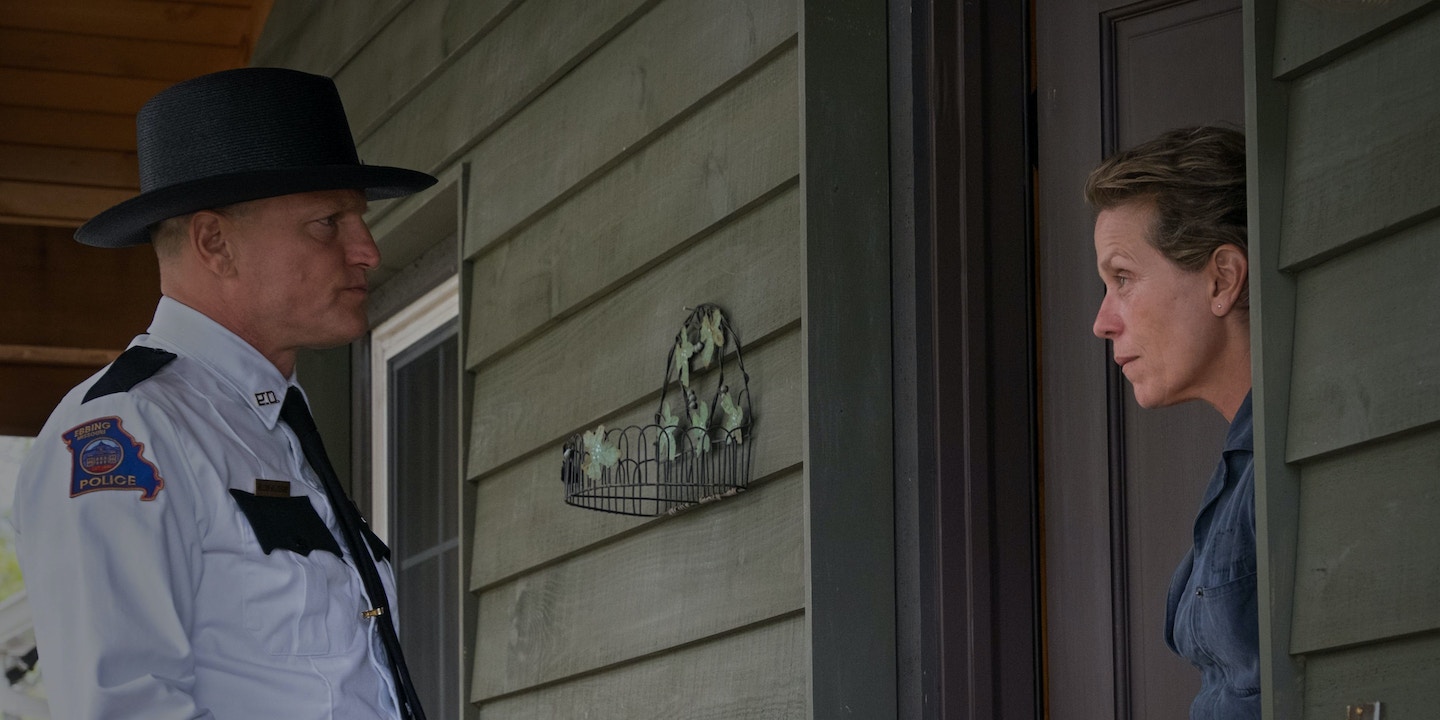 “It seems to me the police department is too busy torturin’ black folks to solve actual crime.”

That’s the explanation Mildred Hayes — whose daughter, Angela, was brutally raped, murdered, and set on fire — offers to a local TV reporter for why she plastered three billboards with questions about local police’s failure to catch her daughter’s killer. “Raped While Dying,” “And Still No Arrests?” and “How Come, Chief Willoughby?” the billboards read.

The implication is that police frequently abuse the rights of innocent black people but are unable — or unwilling —  to put together the resources to solve crime in the fictional town of Ebbing, Missouri.

Hayes, played by the astute Frances McDormand, is the protagonist of writer-director Martin McDonagh’s latest film “Three Billboards Outside Ebbing, Missouri,” which debuted earlier this month.

Like McDonagh’s last feature films — “In Bruges” and “Seven Psychopaths” — “Billboards” is a dark comedy that focuses on big moral questions, but this time, the film is tied to a debate currently raging across the country, from local municipalities to the federal government: What’s wrong with America’s criminal justice system? And what sort of balance should that system strike between victims’ rights and those of the accused?

For Hayes, the problem is that her daughter’s killer is still on the loose, while the police in her rural Midwestern town are too inept and too racist to properly focus on catching the culprit. But the townsfolk don’t take well to Hayes’s campaign, launching an informal movement akin to “Blue Lives Matter” — the pro-police movement launched in response to Black Lives Matter’s calls for racial justice and equality — to complain about Hayes and, in some cases, to intimidate the grieving mother into backing down.

After all, the target of her campaign, Police Chief William Willoughby, played by Woody Harrelson, is hardly unsympathetic. He’s a well-regarded member of the community, a proud husband, and a father of two young children. Unlike some of his subordinates, he has no history of brutal police practices or racism, and as far as the town of Ebbing is concerned, he has made every effort to apprehend the Angela Hayes’s rapist and murderer.

The clash between Willoughby and Hayes is representative of some of the moral questions at the heart of the debate on criminal justice reform. On the one hand, the viewer wants Hayes to catch her daughter’s killer: Criminal accountability is a bedrock of a just society. But on the other hand, Hayes is so intent on her individual pursuit of justice that she is willing to sacrifice the liberties of innocent bystanders. She tells Willoughby that the ideal solution would be to subject every male in the country to a DNA test, and to kill the person whose DNA is a match for that found on her daughter.

The exchange between the two is typical of McDonagh’s dark comedic writing, but it’s also emblematic of the discourse around criminal justice in the United States over the past three decades.

One of the drivers of “tough on crime” policy since the 1970s has been the belief that there is a zero-sum game between justice for victims and the civil rights of suspects and convicted criminals.

While former President Bill Clinton presided over the passage of the infamous 1994 crime bill, he also pushed unsuccessfully for a constitutional victims’ rights amendment that mirrored what many states already had on the books. Under this amendment, victims of crime would have a federal constitutional right to be notified of and attend certain court proceedings, and to make statements that could influence decisions on release, plea bargains, sentencing, and bail.

University of Toronto law professor Markus Dirk Dubber explored this dynamic in his 2006 book, “Victims in the War on Crime: The Use and Abuse of Victims’ Rights.”

“The war on crime has sought the extermination of crime in all its myriad forms and manifestations. In pursuit of its ambitious incapacitative mission, the crime war dramatically expanded and refined the state’s web of criminal norms, and at the same time, made the consequences of their violation more severe,” he wrote. “The victims’ rights movement provided a convenient cover for this mass incapacitation campaign. The state transformed its constituents into a community of potential victims who identified with the sympathetic sufferers of criminal violence.”

When Clinton signed the crime bill into law, he explicitly thanked the “representatives of the victims groups … for being here and making this day possible.” He pointed out that minors were both the most common victims and perpetrators of violent crime, and cited the cases of Meghan Sposato, who lost her mother in a shooting, and Polly Klaas, a 12-year-old who was murdered by a repeat offender and became the inspiration for California’s infamous “three strikes” law.

While the victims’ rights movement was used to support America’s turn toward harsh criminal justice policy in the ’80s and ’90s, it was by no means the only driving factor. When then-Arkansas Gov. Clinton denied clemency to Ricky Ray Rector  — an intellectually disabled African-American man — on the eve of a presidential primary election, his actions were widely read as an appeal to racist instincts. Similar racial politics were in play when George H.W. Bush’s presidential campaign utilized the infamous Willie Horton case against Bush’s Democratic opponent, Michael Dukakis.

And while punitive concerns play a role in the victims’ rights movement, so do worries about the system’s failure to properly address restitution and deliver justice. The movement has in fact played an important role in criminal justice reform.

In “Billboards,” McDonagh sends the message that we as a society can sympathize with a victim without endorsing the rage of vengeance.

In the film, Hayes goes on the warpath against the local community — in one scene, she assaults some high school students who object to her billboards and in another, she drills a hole into the thumb of a dentist who sticks up for Willoughby  — and it’s clear that defining justice as an expression of rage, even by the most sympathetic victims, is hardly humane. As Mildred’s ex-husband tells her in the movie, “All this anger, man, it only begets greater anger.”

Like is typical of McDonagh’s films, the characters in “Billboards” exhibit plenty of villainous behavior — racism, police violence, domestic abuse, vulgarity — but they’re far-from one-dimensional. Even the people who appear to have no redeeming qualities end up taking a surprise moral turn. While the movie explores a number of flaws in the criminal justice system — from laws that make marijuana possession offenses a felony to the difficulties in prosecuting an abusive police officer — it also depicts rank-and-file police officers who are just as eager for a more just system as their critics are.

One example is a character named Dixon, a brutal cop played by Sam Rockwell, who is rumored to have racist tendencies, quick to draw his baton, and generally hostile to liberal critiques of the criminal justice system.

But like the characters in “In Bruges” and “Seven Psychopaths” — films where contract killers and other social deviants search for redemption — Dixon is a complex character who demonstrates  that few people can truly be defined by their worst actions. Through Dixon, McDonagh illustrates the left-liberal view that crime is at least partially socially inculcated: Just as criminals can be bred by poverty and violent upbringing, so too can abusive police officers — after all, they’re all human beings.

“Billboards” emphasizes the fact that there is no easy, black-and-white path toward justice, and people are just as complicated as the social policy we build around them. In a number of American cities, such as Baltimore, most homicide cases never result in an arrest. There are likely countless Mildred Hayeses in that city, waiting for the police to give them closure. But the grieving of these victims could easily be used to justify massive expansions of surveillance, policing, interrogation, and detention that would cut at some of America’s most treasured civil liberties and rights — as happened in the 1990s.

As the debate surrounding criminal justice reform continues, those on both sides of the issue will benefit from keeping the lessons of “Billboards” in mind.

Correction: Dec. 4, 2017, 1:26 p.m.
An earlier version of this piece misidentified a character in the movie as Angela Hayes’s ex-husband. He was, in fact, previously married to Mildred Hayes.