In Atlanta, police moved in to crack down on good Samaritans feeding the homeless, citing a county ordinance that requires a permit for food distribution. Every Sunday, like clockwork, activists Adele Maclean and Marlon Kautz distribute food to the homeless at a public park in Atlanta. But when they went out to deliver food the Sunday before Thanksgiving, taking part in a longtime American holiday season tradition, local police ticketed them for violating a county ordinance that requires a food distribution permit.

Atlanta is in Georgia’s Fulton County, which has long had a policy on the books that requires organizations that distribute food to obtain a permit before doing so. Local authorities have in the past turned a blind eye, according to groups that feed the homeless in different parts of the city. Last week, however, that changed.

Atlanta police officers told charitable individuals that they can no longer feed the homeless without applying for and receiving a permit. Georgia State Police also distributed a flyer, produced by Atlanta’s Department of Public Safety, about the enforcement of a county ordinance that requires permits for the “operation of a food service establishment.” According to the flyer, enforcement is necessary for sanitary reasons and because “many people become dependent on these activities, leading them to stay on the streets instead of seeking the help and support they truly need.” 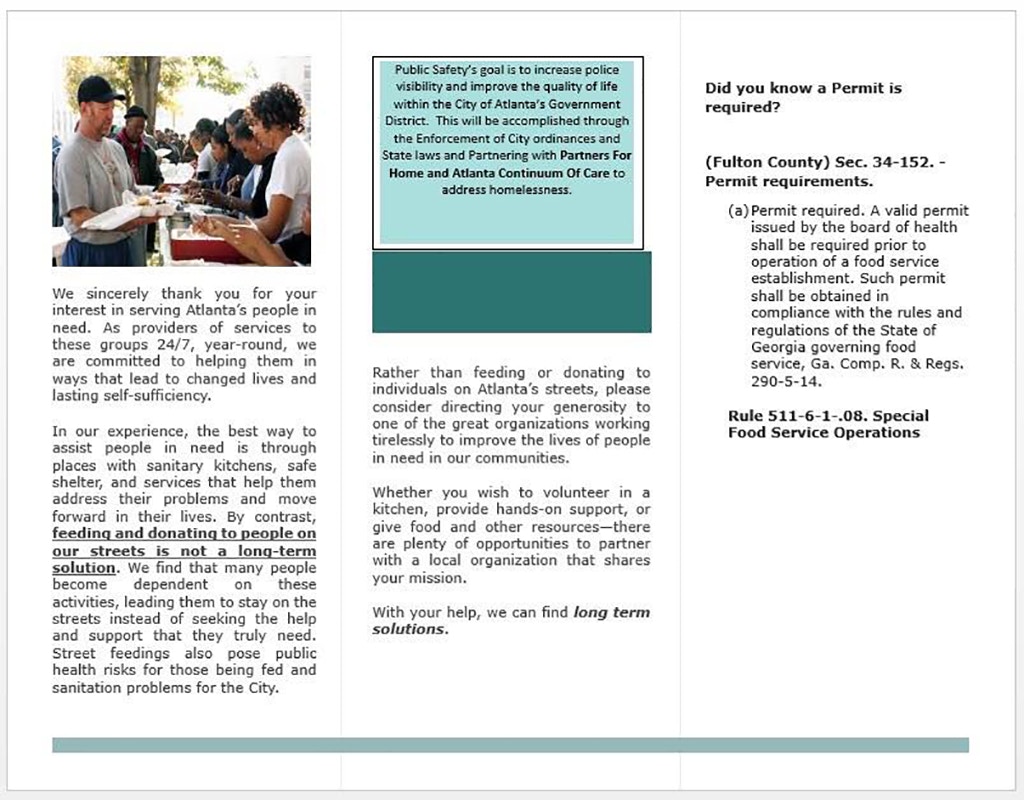 Maclean and Kautz, who are activists with a group called Food Not Bombs, are due in court next month on the charge of violating the county ordinance. Maclean provided a copy of her ticket to The Intercept, which we have redacted to conceal her home address: Kautz described the situation to Atlanta’s Channel 2, which was filming when police issued the citations. “I mean, outrageous, right? Of all the things to be punished for, giving free food to people who are hungry?” he said.

Atlanta Indymedia was present when police officers told other Food Not Bombs volunteers that police will start to enforce the county’s rules on food distribution, and captured the exchange on camera.

Some of those participating in food shares responded to the city’s warnings by relocating. “We have two 30-foot trailers full of stuff and we’re ready. We’re going to go to one spot and if we get run off, we’ll go somewhere else and if they run us off, we’ll go somewhere else until we hand everything out,” Frankie Holbrook, who runs street ministries and feeds the homeless, told Fox 5.

Having once been homeless himself, Marshall Rancifer, the founder and outreach director of the Justice for All Coalition, has spent 17 years working with Atlanta’s homeless. He told The Intercept that resources to feed the homeless are especially limited over the weekend, when shelters are packed, making street feeding often the easiest way to get food to the population.

On November 11, after he finished distributing food at Hurt Park, he saw Georgia State Police officers stop others from doing the same, he said.

“I stepped forward and told them they couldn’t stop people from feeding people in the park. That was people’s God-given right to take care of each other,” Rancifer said, recounting his conversation with the officers. He said they didn’t ticket him but gave him a warning.

One of the agencies charged with enforcement is Georgia State University’s campus police. In an email to The Intercept, GSU Police Chief Joe Spillane explained his office’s coordination with the Atlanta Police Department and gave reasons for the decision to enforce the rule:

We do coordinate efforts with APD when it comes to large gatherings and permitting issues. Our stepped up enforcement has to do with an increase in the amount of and large numbers that congregate waiting for food.  (several hundred people). Fights, trash, urinating and [defecating] in the park, etc.  We have to clean the park four times a day Saturday and Sunday as these groups give food away in containers and leave without taking their trash with them,  the containers and trash litter the park and surrounding streets after each feeding. We also have concerns over the safety of the food being served as there are health regulations that apply to serving food in public places (or anywhere for that matter).

Rancifer disagrees with the city’s explanation for the sudden enforcement, saying that litter is not a major problem. “Some people who come out and feed don’t clean up behind themselves, but the majority of those do clean up after themselves,” he said.

Atlanta has a long history of punitively cracking down on those without shelter. In 2012, the city passed an aggressive anti-panhandling law that makes soliciting for money in certain areas a crime punishable by community service or jail. Keisha Lance Bottoms, one of the two contenders in Atlanta’s mayoral runoff, supported the bill. “This is not a heartless piece of legislation,” she said. Like others on the city council, she pointed to services the city maintains for the homeless as an alternative.

In 1996, when Atlanta hosted the Olympics, Fulton County offered the city’s homeless population one-way bus tickets to anywhere in the country, conditioned on signing a statement promising not to return.

But the Food Not Bombs activists said the threat of a civil citation won’t stop them. MacLean said the group plans to serve meals outside the courthouse on the day of her hearing. “There is gonna be a meal serving outside the courthouse on that same day. So I’m due in the court at 8 a.m. on the 14th, and we will be outside with a table with coffee and breakfast,” she told The Intercept.

Correction: Nov. 29, 2017, 3:01 p.m.
An earlier version of this story incorrectly attributed a quote to Adele Maclean instead of Marlon Kautz, based on a misattribution made by Atlanta’s Channel 2, the original source.

Top photo: A person walks into the the Peachtree-Pine homeless shelter, in Atlanta on Aug. 7, 2017.