Twitter’s retraction of its explanation for allowing President Donald Trump to openly incite hatred and violence toward Muslims makes no sense. On Wednesday morning, without any commentary whatsoever, Donald Trump retweeted three videos originally uploaded by Jayda Fransen of Britain First, an ultranationalist, far-right hate group known for its fiercely anti-Muslim rhetoric. Twitter, which at least pretends to have rules against blatant incitement against racial and religious groups, at first gave Trump a pass on the grounds that his retweets “ensure people have an opportunity to see every side of an issue” and represent “a legitimate public interest.” Today, the company is taking that defense back, and replacing it with nothing. 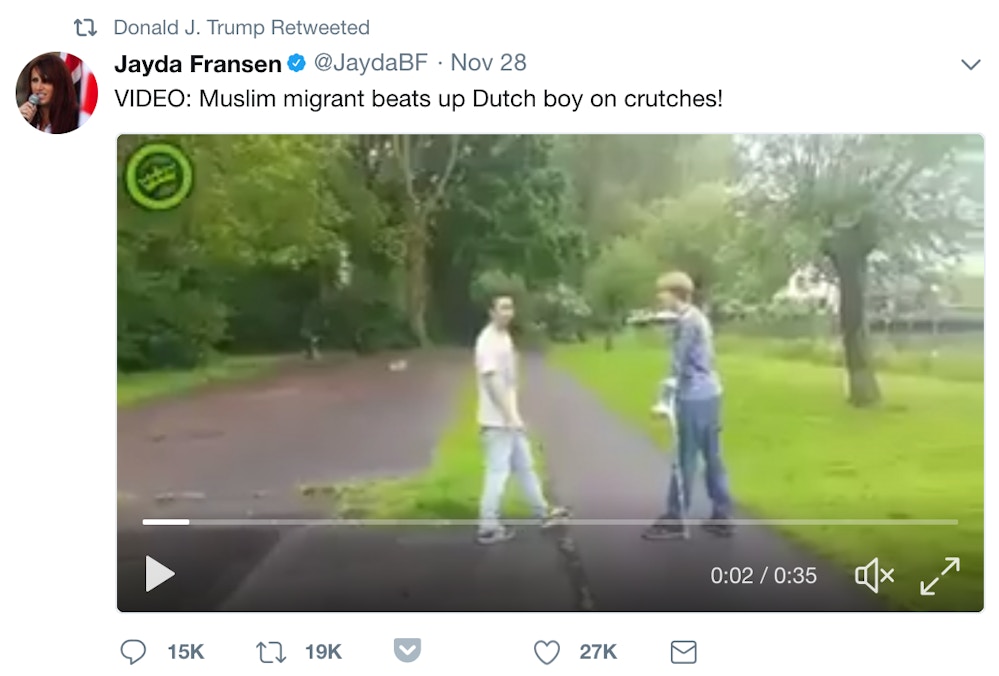 The three tweets are par for the course from any hate group — contextless clips with titles like “Muslim Destroys a Statue of Virgin Mary!” and “Muslim migrant beats up Dutch boy on crutches!” that are increasingly used to stoke ethnic fear in countries with immigrant populations like the U.K.’s. One would be hard pressed to come up with any other takeaway from the retweets beyond the suggestion that Muslims are dangerous and to be feared, content that clearly runs afoul of Twitter’s “hateful conduct” policy: At first, Twitter told The Intercept that Trump’s promotion of content that would normally violate the “hateful conduct” rule was exempted because “we believe there is a legitimate public interest in its availability.” Today, that was retracted, in a series of tweets that did nothing but confuse everyone who read them:

To clarify: these videos are not being kept up because they are newsworthy or for public interest. Rather, these videos are permitted on Twitter based on our current media policy. https://t.co/RqEQy3skgc

Yet the “media policy” does nothing to address why content that violates Twitter’s terms of service would be permitted for any reason. Twitter CEO Jack Dorsey’s addition to the thread only provided further muddling and boilerplate:

We mistakenly pointed to the wrong reason we didn’t take action on the videos from earlier this week. We’re still looking critically at all of our current policies, and appreciate all the feedback. See our safety calendar for our plans and ship dates. https://t.co/yGytH3eskM

It’s fair to say at this point that with the (bizarre, inadequate) rationale from earlier this week retracted, and no actual rationale (flawed or otherwise) offered in its place, Twitter simply does not have a reason for allowing Donald Trump to openly incite hate — and potentially violence, according to the Department of State — contrary to the service’s stated policies.

Repeated requests for clarification sent to Dorsey were not returned, and a Twitter spokesperson declined to explain anything at all on the record, adding only, “We don’t have anything to add to our Tweets today and Jack’s follow-on Tweet after, but thanks for checking.” The spokesperson also requested that I cease directing questions about Twitter to Dorsey, the company’s CEO. A call to the Twitter spokesperson’s work number was answered with a voicemail message asking that reporters not leave voicemails.

Top photo: The Twitter Inc. account of U.S. President Donald Trump, @POTUS, is seen on an Apple Inc. iPhone arranged for a photograph in Washington on Jan. 27, 2017.