For the First Time in Three Decades, the “Death Penalty Capital of America” Goes Without an Execution

Harris County, Texas, has the dubious distinction of having sent more people to death row than any jurisdiction in the nation. 2017 marked a notable shift. Harris County Sheriff’s Deputy Darren Goforth was filling the tank of his cruiser at a gas station outside Houston, Texas, when he was ambushed and shot repeatedly in the back of the head by a man named Shannon Miles. Miles was quickly apprehended and charged with Goforth’s murder; there was little doubt that prosecutors would seek the death penalty.

It was exactly the kind of crime that in the not-too-distant past would have been a slam-dunk death case in Harris County, which has the dubious distinction of having sent more people to death row than any jurisdiction in the nation and, aside from the state of Texas as a whole, is responsible for the greatest number of executions.

Still, there were problems with the case: Miles had a history of mental illness and had to be hospitalized in order to ensure his competency to stand trial. While such issues haven’t traditionally stopped the state from seeking — or securing — a death sentence in any number of troubling cases, in September, at the urging of Goforth’s widow, prosecutors agreed that the death penalty should be taken off the table and Miles should be sentenced to life without parole.

The outcome of a case like Miles’s points toward a deeper understanding of the issues that plague capital punishment and suggests a “reflection on the fact that there are no crimes and no defendants that are automatic symbols of death anymore,” Kristin Houlé, executive director of the Texas Coalition to Abolish the Death Penalty, told The Intercept.

Indeed, 2017 marked the third year in a row that Harris County did not send any new defendants to death row. Even more dramatic, it was the first year in more than three decades that no one from the county was executed. Texas added just four new names to its death row roster in 2017, down from a peak of 48 new sentences in 1999; and the state executed seven individuals, down from a high of 40 put to death in 2000, according to a new report by the TCADP.

The lack of new death sentences or executions out of Harris County is also notable in its reflection of the change in attitudes about capital punishment across the United States, says Robert Dunham, executive director of the Death Penalty Information Center. “It’s symbolic because Harris County has executed more people than any other county. And it is emblematic in that the long-term trend we’re seeing is away from the death penalty.”

In its year-end report, the Death Penalty Information Center projected that by month’s end, a total of just 39 new death sentences will have been imposed in 2017 — down from a stunning 315-sentence total in 1996. Similarly, there were a total of 23 executions carried out, down from a high of 98 in 1999. There are currently 2,817 people in the U.S. living under a death sentence. Activists hold signs with the names of people executed in the United States since 1977 during an anti-death penalty protest in front of the U.S. Supreme Court on Jan. 17, 2017, in Washington, D.C.

In October, Gallup found that just 55 percent of Americans said they favored capital punishment, the lowest level of support since 1972 — the year the landmark case known as Furman v. Georgia was argued before the U.S. Supreme Court. In Furman, lawyers for death row inmates argued that the death penalty violated the Eighth Amendment ban on cruel and unusual punishment. The court ultimately found that the way the death penalty was administered at the time was racist and arbitrary and concluded that it should be banned. In 1976, the court’s ruling in Gregg v. Georgia allowed for the resumption of capital punishment based on the notion that it would be less arbitrary and capricious if reserved only for those who commit the most heinous of crimes.

Forty-five years later, with national sentiment turning against the death penalty, the high court could again be poised to consider its legality. Pending before the court is a case that asks the justices to consider whether the promise that capital punishment would be imposed in a responsible manner, narrowed to capture only the worst of the worst, has been kept. Lawyers representing Abel Daniel Hidalgo in Arizona say the state — and the nation — has not restricted the use of capital punishment to such situations. Neal Katyal, the former Obama administration solicitor general who is representing Hidalgo, argues that instead of narrowing eligibility, Arizona has so grossly expanded it as to expose “virtually every” person charged with murder to the possibility of the death penalty, which violates constitutional protections.

Today, Dunham says, the “social factors” at play “mirror the conditions that were present when the U.S. Supreme Court struck down the death penalty” in 1972. “I think there is little question that the Furman court, if it were reviewing the death penalty today, would reach the same conclusion. And the Gregg court would reach that same conclusion, because several of the justices from the Gregg court who upheld the death sentence at that time came to change their minds.” The only difference now, he says, “is the current composition of the court.” Mark Clements, right, who was imprisoned for 28 years before being exonerated, wipes sweat from his brow while advocating for the commutation of Jeff Wood’s death sentence outside the office building of Gov. Gregg Abbott on Aug. 18, 2016, in Austin, Texas.

The death penalty might be on the decline, but the system is still plagued by racism, dismal lawyering, overzealous prosecutions, sloppy or nonexistent judicial review, and the specter of actual innocence — factors that should animate the Supreme Court’s decision on whether to review the system again.

In Texas, for example, 70 percent of those sentenced to death over the last five years have been people of color, according to the TCADP report. Similarly, in Riverside County, California — dubbed the “buckle of a new Death Belt” — every defendant sentenced to death over the past two years has been a person of color, DPIC reports; in the five years before that, it was 76 percent. In Arkansas, where officials raced to execute eight people this year in an effort to use their stock of lethal injection drugs before it expired, there were four stays of execution. “Can you guess the race of those who got stays?” asks Dunham. Three out of four were white; three out of the four who were executed were black.

Four men were exonerated from death row this year, bringing the number of death row exonerees across the country to 160. Their cases highlight the flaws in the system, from insufficient evidence and prosecutorial misconduct to the high incidence of defendants with mental illness and intellectual disability. Meanwhile, according to DPIC, more than 90 percent of those who were executed in 2017 showed significant evidence of mental illness, intellectual disability, a history of severe trauma, or actual innocence — a circumstance that underscores the arbitrariness of application and outcome that once helped to condemn the capital punishment system.

Further highlighting the problem is the fact that location — not the nature of the crime — remains the best predictor of who will face a death sentence. A 2013 DPIC report demonstrated that the majority of death sentences at the time had arisen out of just 2 percent of the nation’s counties. In 2017, the skewing of the system by so-called outlier counties continued: Maricopa County, Arizona — where the Hidalgo case pending before the Supreme Court originated — accounted for three new death sentences, while Clark County, Nevada, added four; Riverside County handed down five new death sentences. All three jurisdictions have long been on the list of outliers. “Three counties, which represent fewer than one-tenth of 1 percent of the counties in the United States, accounted for 31 percent of all new death sentences,” Dunham said. 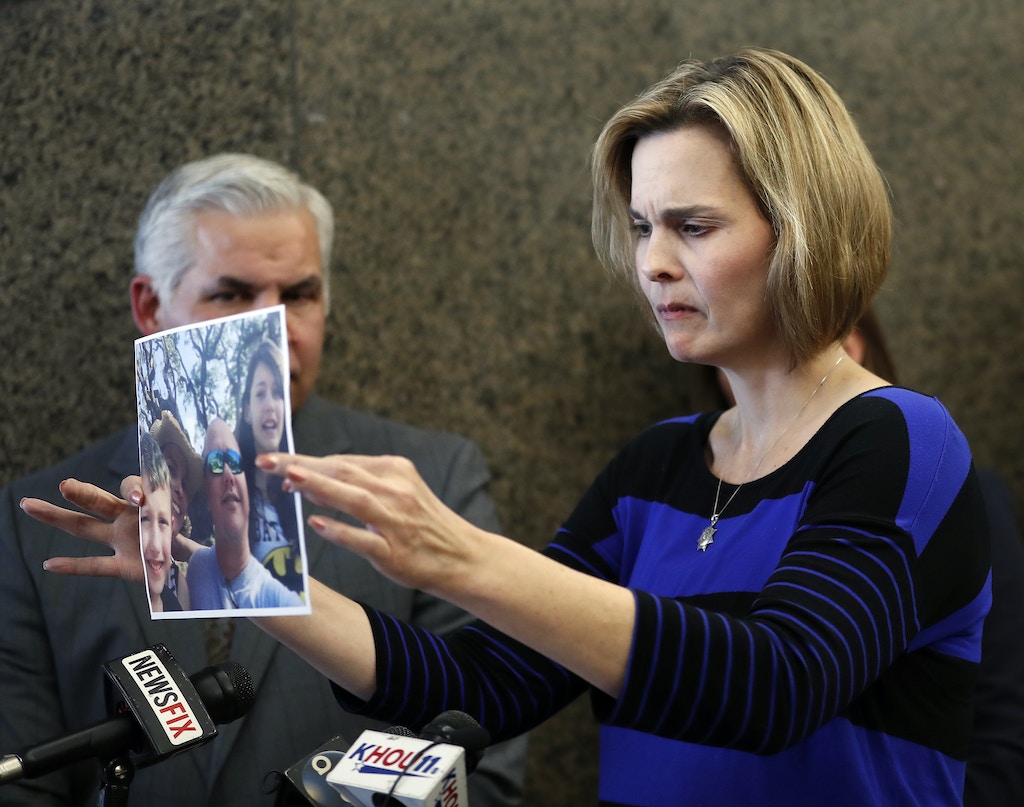 Kathleen Goforth, the widow of Darren Goforth, holds up a photo of her late husband as she speaks to the media after Shannon Miles pleaded guilty at the Harris County Civil Courthouse, Sept. 13, 2017, in Houston.

Kathleen Goforth, whose husband, Deputy Darren Goforth, was killed at the Harris County gas station back in 2015, made a compelling case to prosecutors earlier this year when she said she did not want her husband’s killer, Shannon Miles, to face the death penalty: She didn’t want her family to have to go through the protracted trauma associated with capital punishment. At a press conference, Goforth showed reporters a family photo. “Mine and Darren’s two children have been spared. They will not have the backdrop of their lives, for the next 10 to 25 years, being court dates, trials, and appeals,” she said. “They won’t have that inflicted on them and that is merciful. It’s compassionate, and it’s the right thing to do.”

Goforth’s thinking may well reflect larger changes in the way victims, juries, judges, and an increasing number of prosecutors consider the death penalty, both Houlé and Dunham say. “There is still a long way to go,” said Houlé, “but I think we’re on the right track.”

Harris County District Attorney Kim Ogg, elected to her position last year as a reform-minded prosecutor, seems to embody much of the thinking that influenced the continued demise of the death penalty in 2017. “This has been an important year in terms of death penalty litigation,” Ogg told the Houston Chronicle this fall. “I view it as a positive thing. I don’t think that being the death penalty capital of America is a selling point for Harris County.”