Katharine Graham could stand up to Richard Nixon. But 46 years later we know that her family newspaper could not stand up to capitalism. 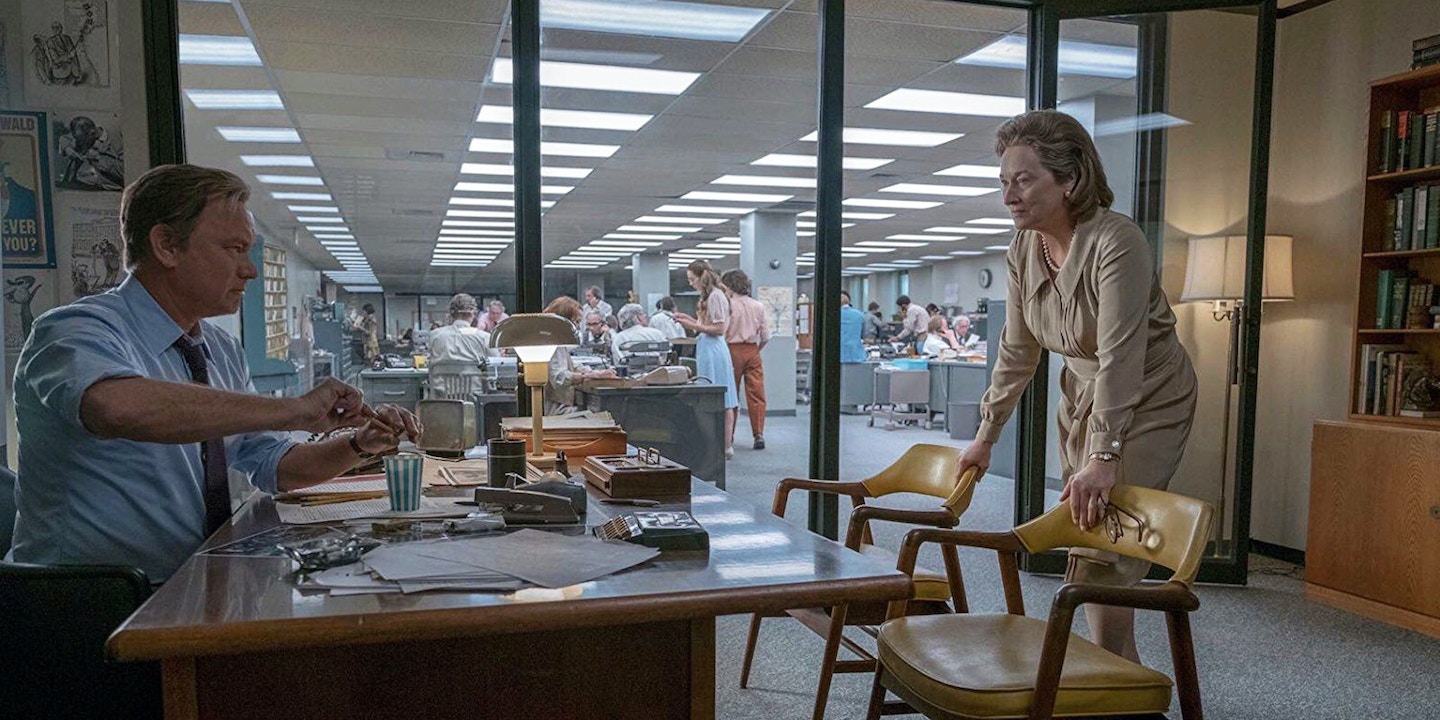 The music in “The Post,” a new Steven Spielberg film opening Friday about the Washington Post’s publication of the Pentagon Papers in 1971, is exquisitely bombastic. It instructs you exactly how to feel at every moment as the Post’s executive editor Ben Bradlee (played by Tom Hanks) pushes to get a copy of the papers – a top secret Defense Department study of decades of U.S. involvement in Vietnam – and then persuades the Post’s owner Katharine Graham (Meryl Streep) to publish them in the face of extreme legal peril. It’s like the score to a Star Wars movie.

Then at the end when the credits roll, you’ll understand why: It’s by John Williams.

And as you walk out, punchy with the thrill of good triumphing over evil, you may realize “The Post” is like a Star Wars movie in several key ways – specifically “Return of the Jedi.”

Now that we know how the story continues in “The Force Awakens” and “The Last Jedi,” it’s obvious that the victory at the end of “Return of the Jedi” was an illusion. Our lionhearted heroes do not live the rest of their lives basking in the joy of their moral perfection, but screw everything up and turn out to be dangerously flawed. What seemed like the final conquest of iniquity turns out to have been a skirmish in a different, bleaker war.

Exactly the same is true for “The Post.” Yes, Graham’s willingness to run stories based on the Pentagon Papers — in the face of a court injunction against the New York Times for first publishing excerpts days before – was courageous. Most importantly, the eventual Supreme Court ruling in New York Times Co. v. United States was a critical landmark in establishing that the First Amendment means what it says. Spielberg’s enormous bag of trickery can feel manipulative when he uses it to turn your emotions up to 11 about something imaginary and meaningless. But you actually should feel it deeply when Post editorial writer Meg Greenfield (Carrie Coon) is called with the decision and conveys it bit by bit to the rest of the newsroom.

But 46 years later we know the rest of the story about the Washington Post, Graham and Bradlee. And in retrospect everything about what happened then looks different.

The sneakiest thing about “The Post” is its inclusion of what almost always gets left out of movies about the media: money. (The script is co-written by Liz Hannah and Josh Singer. Singer also co-wrote “Spotlight.”) Throughout the film Graham is largely focused not on what’s in the newspaper, but that the Washington Post Company is selling public stock for the first time — just as the Post obtains the Pentagon Papers.

She therefore spends less time huddling with editors, and more with the lawyers and bankers running the IPO. A large part of her concern about publishing the Pentagon Papers is a clause in the company’s contract that would allow buyers to void the sale if some kind of catastrophic event happens within a week. She frets as she’s informed that institutional investors don’t like the fact that the Post, unlike some other papers, isn’t a monopoly. And felons can’t own broadcast licenses, so if the Post is convicted under the Espionage Act it will lose its profitable TV stations.

Graham finally forges ahead, informing a plethora of white financial men that she believes that “quality and profitability go hand in hand.”

The problem is that we now know that just isn’t true. High-quality, high-impact journalism that holds powerful institutions accountable isn’t just not profitable, it’s anti-profit. Good journalism is expensive. It takes forever. It scares off advertisers. The powerful fight back, and can inflict enormous additional legal costs even if they don’t win. And if they win they can drive you out of business.

Graham wasn’t crazy to believe what she did: “The Post” occurs in the brief moment in the 1970s when it seemed like these rules had been changed. But in retrospect we can see this was an odd historical anomaly, not the beginning of a new normal. The Post and other outlets were floating on a wave of advertising money from businesses that had no other way to reach a gigantic new middle class. As soon as that middle class deteriorated, and corporations had other technological options to reach consumers with cash to spend, the profitability of American journalism collapsed – first slowly and then very very fast.

The Post held on longer than many of its peers, which have expired across the U.S. as though there were some kind of a bubonic plague targeting newspapers. But the Post’s financial success, while it lasted, had less to do with any kind of “quality” than that it eventually did establish a monopoly, in America’s richest metro area.

Warren Buffett was an early, crucial investor in the Washington Post Company. As described in a 2000 New Yorker article, the paper appealed to him because of his investment philosophy, which is to avoid competitive capitalism whenever possible. “The key to investing is not assessing how much an industry is going to affect society,” Buffett explained in a speech. “The products or services that have wide, sustainable moats around them are the ones that deliver rewards to investors.”

The moat around the Post was deep in 1971. But it finally dried up. Following years of huge losses, Katharine Graham’s son Donald was forced to sell the paper in 2013 to one of the few people who definitely had the resources to keep it alive: Amazon’s Jeff Bezos, now the world’s richest man.

Post-Pentagon Papers and post-Watergate it also became clear Graham and Bradlee were not white knights of journalism. In a 1988 speech at the CIA, Graham portrayed herself as a responsible member of the U.S. establishment who could be trusted to dole out just the right amount of information to unwashed Americans. “We live in a dirty and dangerous world,” Graham said. “There are some things the general public does not need to know, and shouldn’t. I believe democracy flourishes when the government can take legitimate steps to keep its secrets and when the press can decide whether to print what it knows.”

And while “The Post” portrays Graham and Bradlee as agreeing that the days have to end when they both censored the news to protect their powerful friends, they didn’t. Robert Parry, a reporter who worked at Newsweek in the 1980s (then owned by the Washington Post Company) has written that he was “told that my story about the CIA funneling anti-Sandinista money through Nicaragua’s Catholic Church had been watered down because the story needed to be run past Mrs. Graham, and Henry Kissinger was her house guest that weekend.”

Then there’s Bradlee. One story left out of “The Post” is that the company’s IPO led him to resign from its board because the salaries of board members were now going to become public. Bradlee didn’t want his reporters to know how much he was making. Then he was evasive when his employees asked how much his Post stock was worth.

Bradlee also did not cover himself in glory as the disastrous problems with establishment journalism were revealed by the march to war with Iraq. Bradlee publicly proclaimed that he was “embarrassed” by the 2004 apologies by both the Post and the New York Times. Why? Because “I don’t think they really have a hell of a lot to hang their head about.” If you didn’t like their Iraq coverage, he informed us, “you’ve got to lump that.”

But those were personal issues. The overwhelming problems for journalism are structural, not individual. So go see “The Post” – it’s incredibly well-made, it’s dramatic, and it’s surprisingly accurate. Just remember that Katharine Graham could stand up to the government, but in the end her paper could not stand up to the Force of capitalism.