A Leftist Economist Steps Aside As the Debate Shifts His Way 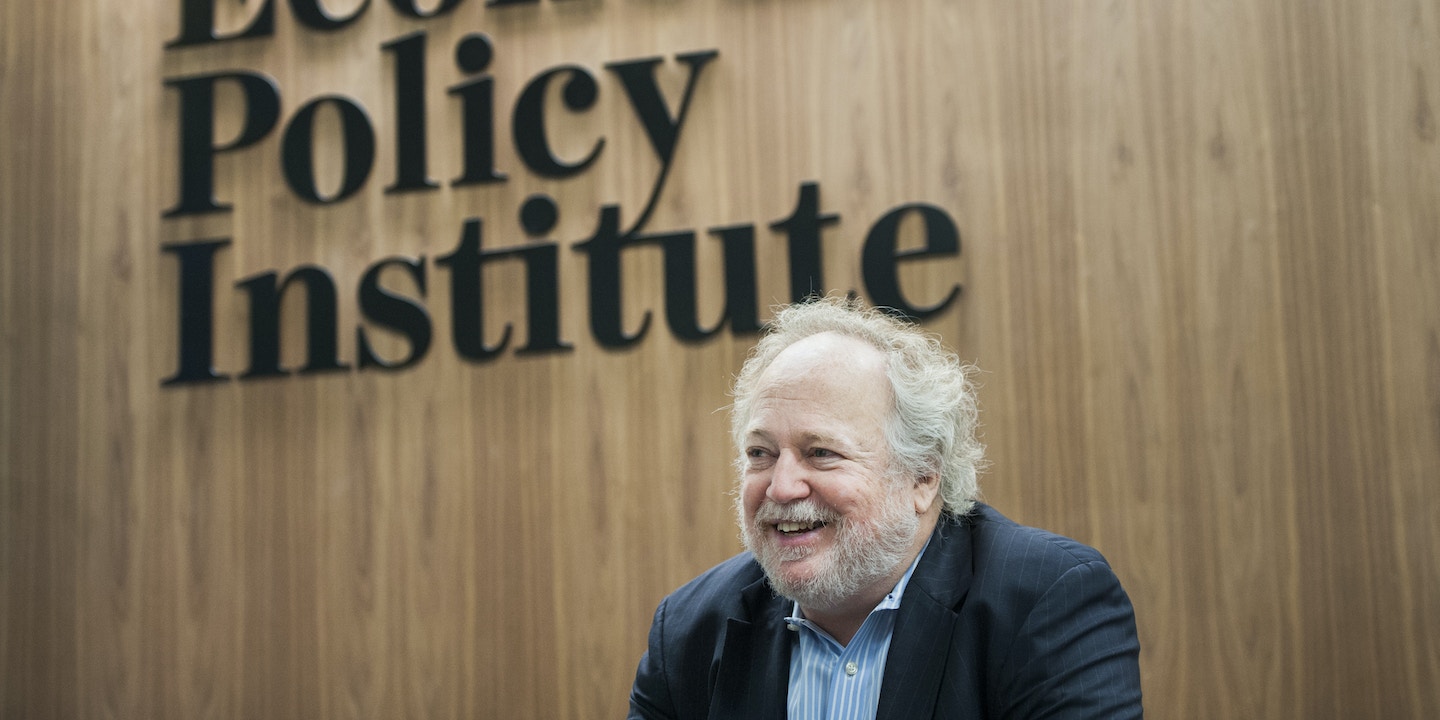 When Lawrence Mishel came to Washington during the height of the Reagan revolution, the options for a young leftist economist looking to make a difference were nearly non-existent.

“The liberal position was represented by the Brookings Institution,” Mishel told The Intercept, “which at the time was very free trade uber alles, hostile to industrial policy, not interested in workers and unions. The debate was between Brookings on the left, and [the American Enterprise Institute] and the Heritage Foundation on the right.”

And then there was the Economic Policy Institute, a new think tank designed to fill the ideological gap and shift America’s economic debate to the left. In 1987, Mishel joined EPI as a research director, later becoming vice president and eventually president in 2002. As his thirtieth year at EPI winds down, Mishel gets to see the Democratic Party finally move closer to the positions the think tank has always had. Now, he is stepping aside.

“The hallmark has been to center that an economy is only working if it’s working for the benefit of the vast majority,” Mishel said. “We hammered that every day.”

Mishel, who will stay on as a senior economist, hands off EPI this week to new leader Thea Lee, who came over from the labor union AFL-CIO. Both Lee and her new vice president, John Schmitt, got their start as economists at EPI, along with such stars of the progressive economic firmament as Dean Baker, Heather Boushey, and Jared Bernstein. The roster of alumni shows how Mishel and EPI built a home for the left to navigate Washington amid Blue Dogs, New Democrats, and Third Way centrists, ultimately outlasting them all.

From the beginning, EPI elevated the daily struggle of those on the economy’s margins.

EPI was a joint project of the labor movement and a half-dozen prominent liberal economists, including Jeff Faux, who became the organization’s first president and set its direction. Faux committed EPI to serious research — to this day the organization has more Ph.D. economists on staff than its counterparts on the center or left. But his ambition went beyond filling a shelf with white papers; he wanted EPI to wedge its way into the national conversation, to capture the attention of policymakers. “When I started as research director and suggested a project, Jeff would ask, ‘What is the headline?’” Mishel recalled.

From the beginning, EPI elevated the daily struggle of those on the economy’s margins. Starting in 1988, Mishel and colleagues produced a biennial report, The State of Working America, with comprehensive data on wages, incomes, jobs, and wealth. The reports found a discordant trend in the economy: wage stagnation amid increasing productivity. Prior to the late 1970s, these two measures followed one another: as workers produced more goods, they made more money. When that changed, others made excuses for this bifurcation while EPI insisted that conscious policy choices shortchanged workers and funneled the gains to the very top, as evidenced by rising CEO compensation and the erosion of living wages. In other words, EPI argued, natural forces didn’t lead workers to their plight — those in power pushed them there.

If these themes of rising income inequality sound familiar today, they were practically a foreign concept at the outset. In 1994, Mishel and Jared Bernstein created a now-famous chart showing the split between productivity and the median hourly wage. The researchers briefed Robert Rubin, then director of President Bill Clinton’s National Economic Council. Rubin’s proposal for increasing wages was reducing the deficit. He explained to Mishel and Bernstein how this would reduce interest rates and boost productivity, and that wages would naturally follow. Then the economists showed Rubin the chart. “We pulled out the chart. It showed that wages and productivity were not aligned,” Mishel recalled. “Rubin looked at it and said, ‘I didn’t know that.’” While conservatives and even some Clintonites are still trying to debunk Mishel’s chart — Larry Summers most recently took a run at it – the disconnect between pay and productivity has now congealed into conventional wisdom. Centrist think tanks like the Hamilton Project now run day-long conferences on wage stagnation, featuring Mishel. Hillary Clinton used the chart prominently in her presidential campaign, and even Donald Trump highlighted poor wage growth; while 2016 didn’t necessarily represent a grand debate about the best solutions to boost worker pay, nobody really refuted the core issue.

You could attribute that shift to the fallout from the desperation of the Great Recession, the radicalism of Occupy Wall Street, Bernie Sanders’s campaign success, or even the improbable popularity of a 696-page French-translated treatise about inequality and the ownership class by Thomas Piketty. But Mishel and EPI inhabited that space for decades before the center-left caught up. Mishel’s often-lonely voice constantly stressed the need to improve living standards for the typical worker, in plain English rather than with jargon or frippery. “I do think our work has been necessary to validate the lived experience of working class that has been denied by the establishment,” Mishel said, “The economy is not broken, it’s just not working for everyone. The vast majority doesn’t do well if labor incomes don’t do well.”

This advocacy to redistribute power downward swims against a flood of corporate lobbyists and campaign donations, competing for policymakers’ attention. Occasionally it reaches the target. Mishel believes the 2009 stimulus helped dig the United States out of the recession, but that another large round was necessary. He split with other center-left think tanks as they followed President Barack Obama with his too-soon pivot to deficit reduction. Throughout the recession, Mishel and EPI consistently demonstrated that more government interventions, like direct public hiring, could improve people’s lives. “I’m proud of that,” he said.

As Mishel steps aside, he believes America needs a broad set of policies to rebuild worker power.

Much of EPI’s work under Mishel served to reject pernicious myths about the economy, hardened into perceived wisdom by self-interested forces. EPI’s research found that social and economic disadvantage, not failing teachers or schools, depressed student achievement. It refuted that high school graduation rates were collapsing, an alternative fact used to push vouchers or charter schools. It proved that automation played little role in inequality. It laughed off the idea that CEOs were paid nearly 300 times more than the average worker based on a competitive race for talent.

In 1988, Mishel’s research on U.S. manufacturing output revealed a significant decline, even as the Bureau of Economic Analysis showed no change in the industrial base. The work prompted the Commerce Department, under Reagan, to revise its measurements of manufacturing output. Today the hollowing out of U.S. factory jobs is an old story.

The Trump era represents a dark age for labor economists, given the recent assault on worker protections. The dubious claim that lowering corporate taxes will translate into rising wages is at odds with Mishel’s life’s work. “We’re putting more money into corporate coffers when at this moment they’re filled with cash, earning nearly the highest after-tax profits in 70 years,” Mishel said. “This violates the history of four decades. We’ve consistently lowered taxes on capital income and the rich. Trump says we live in economic carnage, and we’re doing more of it!”

As Mishel steps aside, he believes America needs a broad set of policies to rebuild worker power, things like raising the minimum wage to $15 an hour, empowering union organizing, ending worker misclassification in the “gig economy” to deny benefits and overtime pay, preventing arbitration agreements that limit worker options in a dispute, and banning non-compete clauses that stop workers from moving to similarly situated employers. These moves to strengthen worker bargaining power, collectively and individually, cut a path to robust wage growth for the 99 percent. “It will take bold proposals,” Mishel said. “If not, we won’t have a vibrant middle class, or a democracy.”

Mishel’s mission in 30 years at EPI was not only to identify the economy’s problems, but to demonstrate how to fix it. And he consistently brought complex insights down to a level of popular understanding, striving to reach the ordinary worker rather than the academy. The way he talked about the economy mirrored who he fought for. A garrulous man with a shock of white hair, Mishel cherishes that EPI has become a fixture in Washington, and that the poles of the economic debate have finally trended in his direction.

“I’m EPI 2.0, Jeff Faux was 1.0,” Mishel said. “I think version 3.0 is going to be great. It’s terrific that the organization remains vibrant and evolving.”

Top photo: Larry Mishel, president of the Economic Policy Institute, is interviewed in his Washington office on May 31, 2017.