“I haven’t really even heard a negative word,” says Keith Noreika of Wall Street’s review of his tenure regulating banks for the Trump administration. 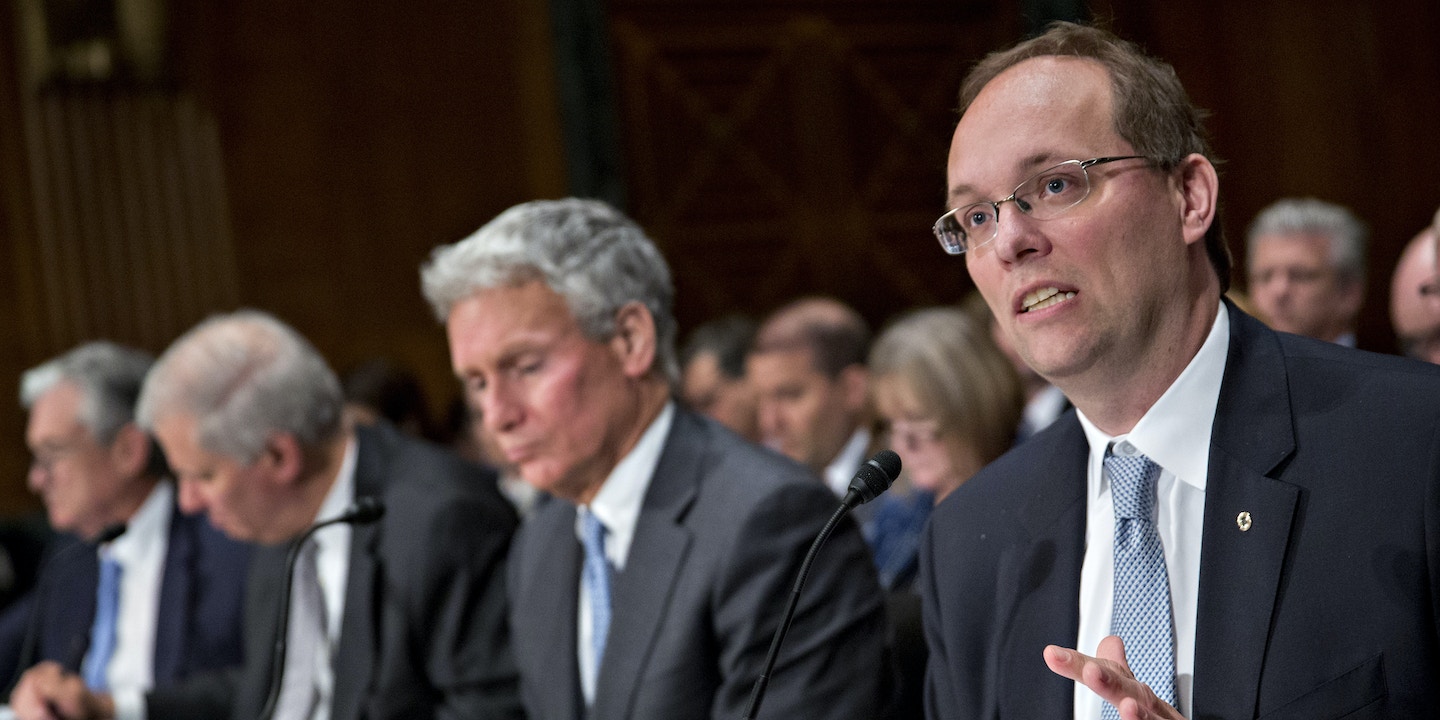 Keith Noreika, the former corporate lawyer thrust into the role of acting comptroller of the currency last year, has returned to his corporate law firm, where he’ll consult large domestic and international banks on precisely the issues handled by the agency he recently led.

Simpson Thacher & Bartlett, where Noreika worked before joining the Trump administration, announced the hire yesterday. Noreika, who will again become a partner at the firm, has previously advised Wells Fargo, JPMorgan Chase, Bank of America, TD Ameritrade, and U.S. Bancorp. According to the Wall Street Journal, he will occupy the same office at Simpson Thacher.

Last May, Noreika was tapped as acting head of the Office of the Comptroller of the Currency, which regulates national banks, replacing Barack Obama’s OCC chief Thomas Curry. He served as a “special government employee,” a designation allowing him to evade formal gift and payment statutes that prohibit outside sources of income and restrict outside employment, as well as certain conflict of interest burdens. Noreika never signed the Trump-era “ethics pledge,” which prohibits executive branch officials from working on matters involving their former clients for two years, or communicating with colleagues about their activities for one year after they’ve left the government.

Typically, special government employees serve on advisory committees rather than run federal agencies. In this case, the Treasury Department made Noreika a “first deputy” comptroller and then slid him immediately into the top slot.

Noreika was unusually active for a temp. At OCC, he fought initiatives of his fellow regulators, like the now-defunct Consumer Financial Protection Bureau rule on arbitration (Noreika served Wells Fargo previously in an arbitration case). He changed guidelines under the Community Reinvestment Act designed to ensure lending in low-income and minority communities: Big banks will now face fewer examinations and reduced penalties for shortchanging such neighborhoods.

He allowed big banks to once again offer short-term, high-cost loans, responding to a separate CFPB rule on payday lending. He wore a “Make America Great Again” cap around the office.

Noreika served well beyond the 130-day limit on special government employees, drawing angry missives from Senate Democrats. But he continued on until November, when his Senate-confirmed replacement, former OneWest Bank CEO Joseph Otting, was sworn in.

Now back at Simpson Thacher, Noreika will “advise a wide range of domestic and international financial institutions on regulatory issues relating to mergers and acquisitions, minority investments, capital issuances, structuring and compliance activities and litigation matters, particularly in the area of federal preemption,” according to the press release.

These are all responsibilities of the OCC, which handles bank mergers, minority investments through the Community Reinvestment Act, enforcement of banks with national charters, and federal preemption of state banking laws. In other words, for Noreika the pitstop in the government was a kind of political intelligence-gathering scheme, coupled with unbeatable networking.

For Noreika, the pitstop in the government was a kind of political intelligence-gathering scheme, coupled with unbeatable networking.

“The press release from BigLaw’s Simpson Thacher represents how Trump’s D.C. is post-shame — they’re saying the quiet, highly corrupt part out loud,” said Jeff Hauser, executive director of the Revolving Door Project and a leading Noreika critic. “Noreika’s business model will be, as watchdogs feared when he dipped into government, selling financial institutions an insider’s take on government’s enforcement capabilities and priorities.”

For example, Simpson Thacher’s head of its financial institutions practice, Lee Meyerson, said in a statement that Noreika’s “knowledge and insights will assist our clients in managing complex regulatory issues … including FinTech.” In fact, as OCC chief, Noreika advanced a proposal to give FinTech — financial technology firms like online lenders — national bank charters, above the objections of state regulators.

Noreika told the Wall Street Journal that he would voluntarily comply with ethics laws that would prevent him from doing business specifically with the OCC for a year. But these are not formal restrictions, and they can easily be circumvented by having Noreika consult with bank clients privately, imparting his insider knowledge of how bank examiners operate.

Like all OCC employees, Noreika is barred from representing clients before the government on matters in which he specifically participated as a federal employee. But most of the issues Noreika worked on were general in nature — he recused himself from specific issues involving his former clients — so the rules would not prevent him from representing a bank on a specific case.

Banks were very happy with Noreika’s performance as OCC chair, he informed the Wall Street Journal. “I haven’t really even heard a negative word.”