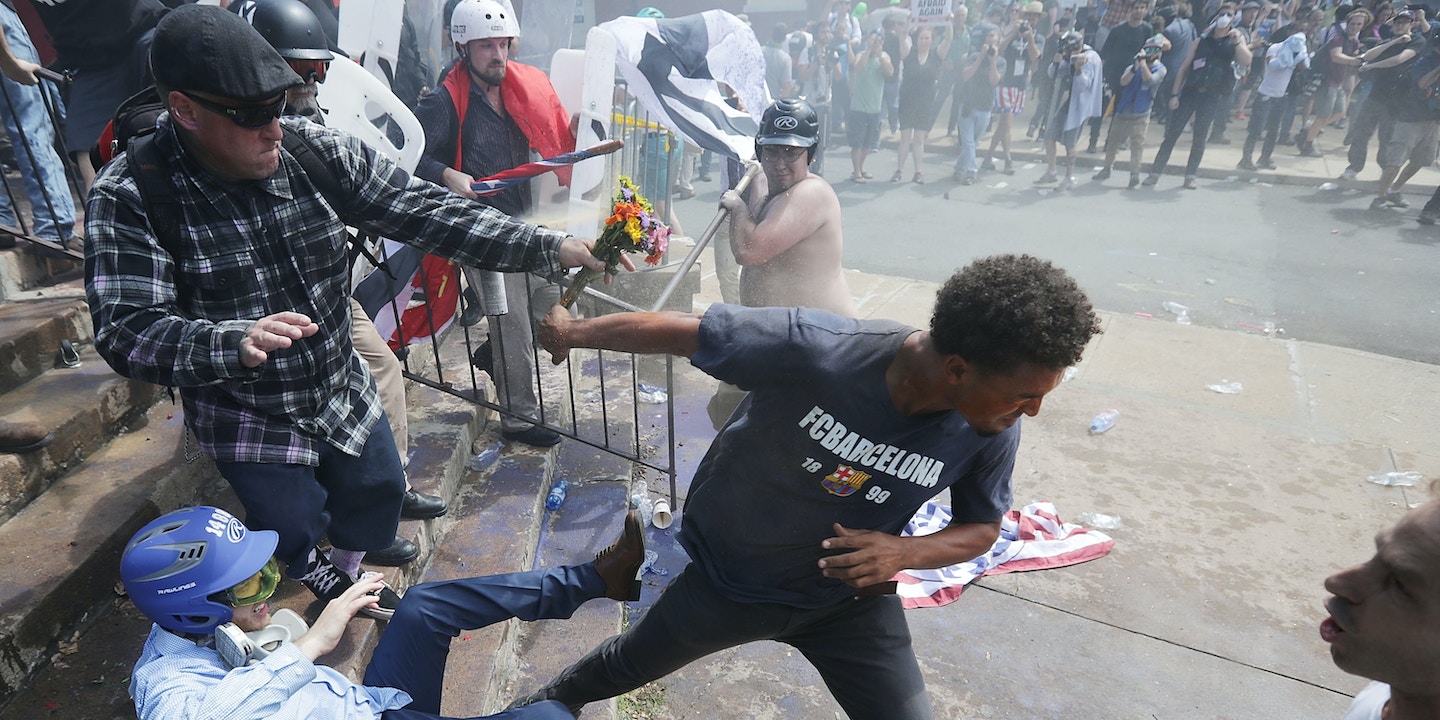 If a reader were to judge from popular media accounts, the biggest threat to university life and public discourse would be obvious: the left-wing students on campus fighting various forms of bigotry and other injustices. From liberal broadsheets to Breitbart.com, commentators have taken up a strawman debate — largely shaped by the far right — about campus free speech. Tactics like “no-platforming” and physically confronting neo-Nazis have come under the liberal microscope; the ethics questioned, the proponents decried as the real fascistic force on campus.

As Adam Johnson, a contributing analyst for Fairness and Accuracy in Reporting, told me, a November study he conducted found that the “New York Times has dedicated 21 columns and articles to the subject of conservatives’ free speech on campus, while only three covered the silencing of college liberals or leftists.”

But recently released reports from a pair of prominent nonprofit organizations tell a different story, focusing on the danger we should be addressing: the increased targeting of student spaces by neo-Nazis and white supremacists, and the violence these ideologies entail.

More than 100 people have been killed or injured since 2014 by perpetrators believed to be influenced by the racism and misogyny that defines the so-called alt-right.

The Anti-Defamation League reported that incidents of white supremacist propaganda on U.S. campuses more than tripled in 2017. Groups doubling down on campus propagandizing include explicit neo-Nazis like the Florida-based Atomwaffen Division, as well as associations like Identity Evropa, known for couching its unabashed racist message in thinly veiled panegyrics to protecting Western culture and posters bearing Michelangelo’s David.

“The ‘alt-right’ is a movement of mostly young white males,” Carla Hill, senior researcher for the Anti-Defamation League’s Center on Extremism, told me. “They realize that for any movement to truly grow, they must reach young minds, and this segment of the white supremacist movement has been focused on doing that.”

The potential gravity of this surge was then underlined by a report from the Southern Poverty Law Center, titled simply, “The Alt-Right Is Killing People.” More than 100 people have been killed or injured since 2014 by perpetrators believed to be influenced by the racism and misogyny that defines the so-called alt-right, the center found. More than 60 people were killed or injured in “alt-right” violence last year alone.

The reports draw no direct link between the rise in white supremacist propaganda and the spike in white supremacist murders. But together, they make clear that the threat of “alt-right” influence on young people, above all young white men, is anything but academic: Racist ideology is never free of violence, and neither is it in the case of the cosplaying, Nazi-adjacent trolls of the “alt-right.”

The Anti-Defamation League reported separately in November that white supremacists and other far-right extremists were responsible for 59 percent of all extremist-related fatalities in the U.S. in 2017, up from 20 percent in 2016. While it’s too soon for much dispositive social science on the link, it’s difficult to consider all this data outside of the Trump era in American politics.

Over a year ago, there was no shortage of coverage predicting this sort of uptick in racist violence. The possibility of it occupied the liberal commentariat as Donald Trump’s presidency loomed as an unlikely aberration. Opinion pages in late 2016 ran dozens of pieces wondering whether a Trump regime would be a truly fascist one, warning of emboldened white supremacy and neo-Nazism.

The predictions have, to an extent, come to fruition: As the Anti-Defamation League and Southern Poverty Law Center reports shows, the American far right is sucking up more and more oxygen and exacting an increasingly deadly toll on the country. Trump, for his part, has veered dangerously close to condoning the far right’s violence; at the very least, he has sought to diffuse blame for it.

Liberal publications once obsessed with the threat of fascism have devoted more energy to decrying the students and staff organizing to expunge hate from their midst.

Even as bigotry and racist violence have dug into their footholds over the course of the last year, many of the same liberal publications once seemingly obsessed with the threat of fascism have devoted more energy to decrying the students and staff organizing to expunge hate from their midst.

At New York Magazine, for example, centrist ideologue Jonathan Chait decried the “repressive methods and slogans” of leftists chanting, “Shut it down!” New York Times neoconservative Bari Weiss tweeted in horror that it was “amazing to watch leftists turn free speech into a right-wing issue.” In a New York Times op-ed, the president of the University of Oregon, Michael H. Schill, said the campus “crusade” against fascism was “misguided.”

After the right-wing “Unite the Right” rally in Charlottesville, Virginia, descended into violence, including the killing of a protester by a far-right rally-goer, Trump came under heavy criticism for blaming “both sides.” Yet the mainstream media has too frequently adopted an almost identical stance when it comes to the balance of coverage between left-wing and right-wing demonstrators. In the month following the rally, America’s six top broadsheet newspapers ran 28 opinion pieces condemning anti-fascist action, according to FAIR, but only 27 condemning neo-Nazis, white supremacists, and Trump’s failure to disavow them.

The Anti-Defamation League’s November report evidences the flaws in this “two sides” position. The group found the far right was responsible for 71 percent of domestic extremist killings in 2017, but only 3 percent of killings were attributed to “left-wing extremism” — and even reaching this figure meant the Anti-Defamation League lumped together “anarchists and black nationalists.”

“Alt right” and neo-Nazi organizers — where there is significant overlap — make no secret of the rhetorical Trojan horse they use to infiltrate campus discourse. When white supremacist groups like the white nationalists of the National Policy Institute, along with Identity Evropa, began targeting college campuses in the spring of 2016, they were explicit in their cooption of the liberal lexicon of “safe spaces” and free speech protections.

“Here it is, the birth of the free speech movement,” pronounced far-right group Red Ice in May 2016, at a small rally at the University of Berkeley, California. It was a potent combination: a cynical adoption of traditional liberal and leftist speech mixed with a genuine desire to be able spread ideologies of hate in public without interference. Liberal centrists swallowed it whole.

Wittingly or not, it was a devilish sleight of hand: neo-fascists relying on American liberalism’s unmatched fetishization of protected speech in order to claim that the real fascists are in fact the ones who would see them silenced.

Debates about whether to give a platform to far-right speakers, and which ones, are about ethics and tactics. These issues have been addressed at length — including by me — and we don’t need to go over it all again. Suffice to say that the anti-authoritarian antifa groups criticized for violating the First Amendment rights of white supremacists are not in the habit of asking for government or institutional suppression of anything, let alone speech.

White supremacy has never stood at odds with the American status quo.

The decision to counter hate speech with confrontational protest is not a constitutional violation, even if certain tactics cross the line into illegality. And for the most part, anti-fascist strategy is to draw large protests crowds in order shut down far-right gatherings, using numbers to reduce the likelihood of violence.

All this comes amid a very real threat to progressive students and faculty on campus — to their lives, yes, but also their livelihoods, and even, dare we say it, their ability to speak out. When faculty members have come under attack and lose positions for their support of the international boycott against Israel, when events on the issue have been canceled, and Israel lobbyists push for banning boycott activity on campus, no cottage industry of media outrage emerges to crow about pro-Palestinian groups’ free speech.

The Anti-Defamation League, for its part, is a longtime foe of the Palestinian rights movement, boycotts of Israel, and antifa actions. But even with this history, the group is issuing dire warnings about the immediate dangers of the modern far right — something much of the media has still failed to capture with the necessary gravity.

To be generous, the media focus on the free speech canard could reflect the reasonable assumption that readers already know emboldened white supremacy is bad. To be less generous — and more realistic — liberal and centrist media institutions don’t care as much about white supremacy as they claim to. White supremacy has never stood at odds with the American status quo. Its rise on college campuses is a disgrace, but in itself is not a disruption.

Top photo: White nationalists, neo-Nazis, and members of the “alt-right” clash with counterprotesters as they attempt to guard the entrance to Emancipation Park during the “Unite the Right” rally Aug. 12, 2017 in Charlottesville, Va.