Banned from the U.S. Due to Terrorist Threats, Yemenis Are Themselves the Victims of Attacks

Khaldoon Gahleeb was assassinated by ISIS in November. He had been waiting for a visa to join his family in the U.S. when Trump banned immigration from Yemen. Khaldoon Gahleeb was sitting on the curb outside his home in Yemen on a quiet morning last November, when two extremists drove up on a motorbike and shot him twice in the back of the head.

Khaldoon, a 37-year-old government prison security guard, had been looking down at his phone, waiting for his salary. He’d just complained to his older brother, Mamoon, that he didn’t have any money to buy khat, Yemen’s popular narcotic. Mamoon went inside their family home to get some cash to lend his brother.

When Mamoon returned, Khaldoon was lying on the curb, bleeding from the back of his head. It was an image that the local branch of the Islamic State, who claimed responsibility for the attack, would spread on their own media channels, later published by Yemeni news outlets. 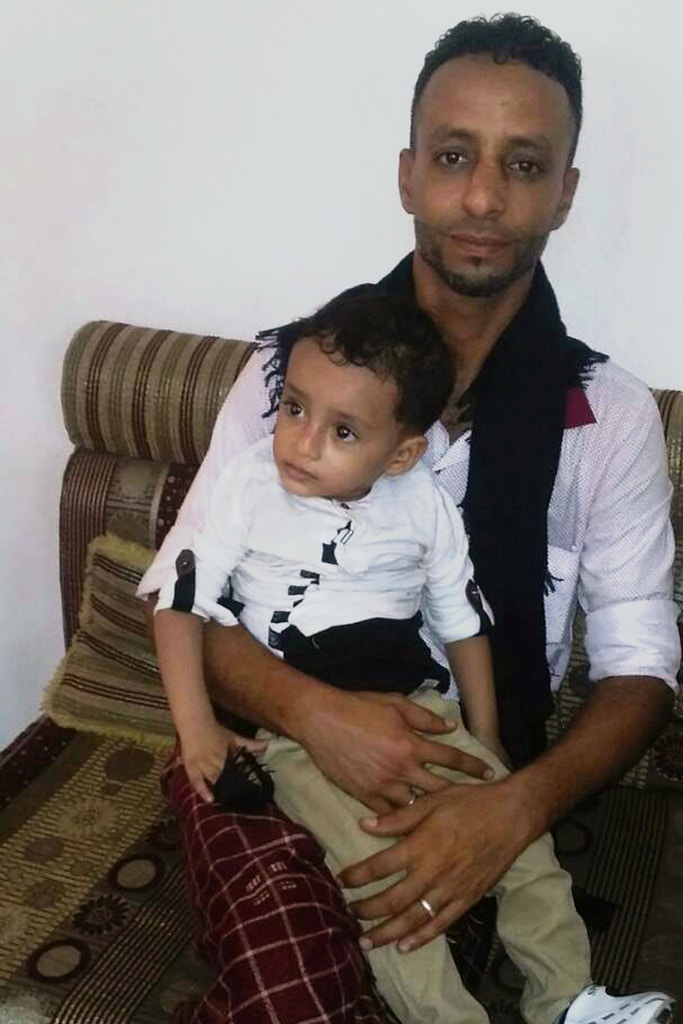 Mamoon rushed Khaldoon to the hospital, but it was too late: The doctors declared his younger brother dead.

In New York City, more than 7,000 miles from the southern Yemeni port city of Aden, the brothers’ father Mohamed Gahleeb couldn’t believe the news. The 73-year-old U.S. citizen had immigrated in 2008, a decade after one of his daughters married a Yemeni-American and moved to Michigan.

Mohamed Gahleeb applied for Khaldoon to join him in 2009. Mohamed has five other children in Yemen, but he chose Khaldoon because his middle son was the one most in need of work. Mohamed also didn’t want to push his luck: He knew how difficult and long of a process it could be to bring even one family member to the United States.

“I was waiting and waiting for him for years, until the day they killed him,” Mohamed said.

Sitting in the kitchen of his basement apartment deep in Brooklyn, Mohamed showed a picture on his phone of Khaldoon holding his toddler son. The elder Gahleeb choked on tears as he kissed the screen and murmured: “My son. It’s not easy for me to talk about. It hurts me too much.”

Visas for married children of U.S. citizens can take more than a decade to process. After Mohamed Gahleeb submitted a DNA test, conducted two immigration interviews, and waited for eight years, President Donald Trump declared his travel ban in January 2017. It barred citizens from seven Muslim-majority countries, including Yemen. The Supreme Court allowed a third version of the ban to go into effect in December, stopping all Yemeni immigrant visas.

The travel ban has left families like the Gahleebs trapped in a war that has killed thousands and created a humanitarian crisis starving millions. Conflict erupted between the Iranian-backed Houthi rebels and the Yemeni government, supported by a Saudi-led and U.S.-armed coalition, in early 2015.

Extremist groups filled the ensuing power vacuum. Al Qaeda in the Arabian Peninsula, active in Yemen since 2009, strengthened, while ISIS, currently waning in Iraq and Syria, seized the chance to move into the region and recruit in 2015. These terror threats were the justification for Trump’s travel ban, but the policy has left Yemenis with liberal views and government affiliations vulnerable to extremists.

“Part of the reason we are not being allowed in the United States is the fact that they say we are connected with terrorists, and here we are getting killed by terrorists,” said Zaid Nagi, community activist and vice president of the Yemeni American Merchants Association in New York City.

Even Yemenis who might qualify to be resettled as refugees face stiff odds. In Trump’s first executive order on immigration allowed to go into effect in June 2017, he banned all refugee admissions for 120 days. When that expired in October, he put into place a 90-day review for 11 countries deemed high risk, including Yemen. Although that leaves open the possibility of refugee admissions, a Reuters investigation in December reported that even when the ban was lifted, refugee admissions plummeted. According to United States Citizenship and Immigration Services, only 16 Yemenis were resettled as refugees in fiscal year 2015, 26 in 2016, 21 in 2017, and none yet in this fiscal year. 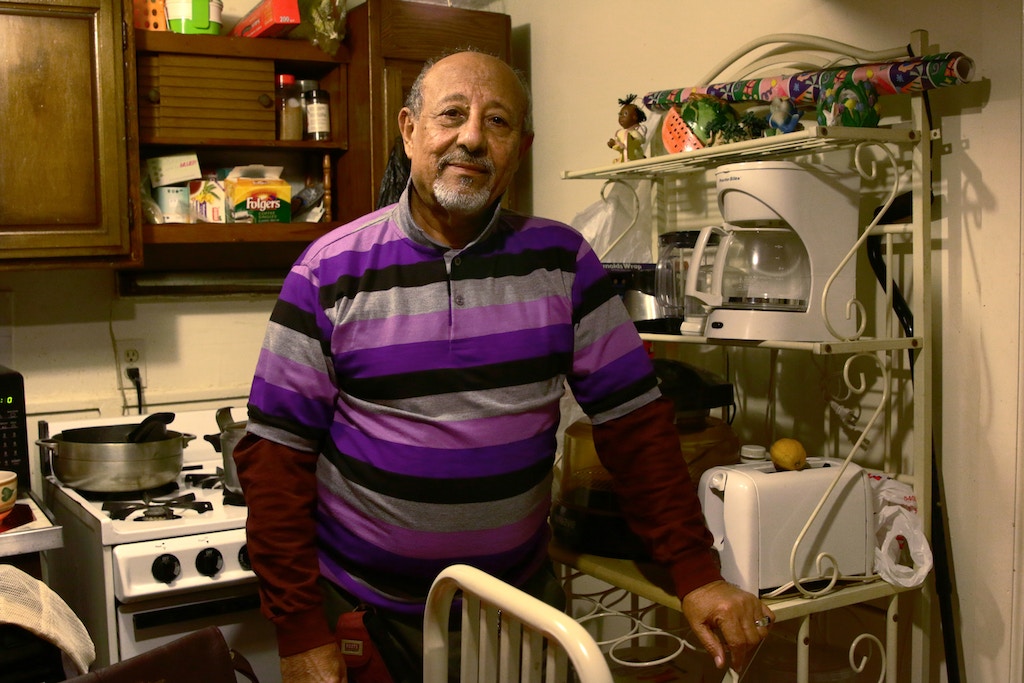 Mohamed Gahleeb at home in Brooklyn.

Mohamed Gahleeb said Yemenis have lived under terrorism for nearly a decade.

“The terror people are everywhere,” he said. “They like to make people fear, they want to kill. Those are people who think themselves that they are Muslims. But God doesn’t say kill your people.”

“We don’t know what they want,” Mohamed added. He also doesn’t know why they targeted his son.

Khaldoon Gahleeb’s death followed a slew of attacks against civilians and pro-government security forces in Aden in November 2017. The local branch of ISIS claimed responsibility for at least two suicide bombings and two assassinations, including Khaldoon’s, although the motivation was unclear.

Elisabeth Kendall, a senior research fellow at Oxford University who monitors extremists in Yemen, said assassinations flagged as terrorist attacks could actually be motivated by political rivalry or criminal activity. In the tumult of war, it’s hard to tell.

The complicated story epitomizes Yemen’s spiraling crisis, where factions constantly shift allegiances. When the war was about to break out in late 2014, Khaldoon joined government forces fighting against the rebel Houthis and former Yemeni President Ali Abdullah Saleh.

The Gahleebs are also staunch supporters of South Yemen, which was an independent country until unification in 1990. Mohamed Gahleeb, who welcomes U.S. and Saudi support for the war against the Houthis, dreams of an independent South Yemen again one day. He celebrated when southern separatist soldiers, backed by the United Arab Emirates, attempted what the prime minister called a “coup” against Aden’s government in January 2018. Fighting in the city is still ongoing.

In this chaos, extremist groups have thrived. Gerald Feierstein, U.S. ambassador to Yemen from 2010 to 2013, explained that the government breakdown undermined counterterrorism aims.

Post-9/11 U.S. foreign policy in Yemen has targeted alleged terrorists with air attacks and ground raids. Drone strikes since 2002 have killed at least 1,000 militants and more than 100 civilians in Yemen, watchdog groups estimate. 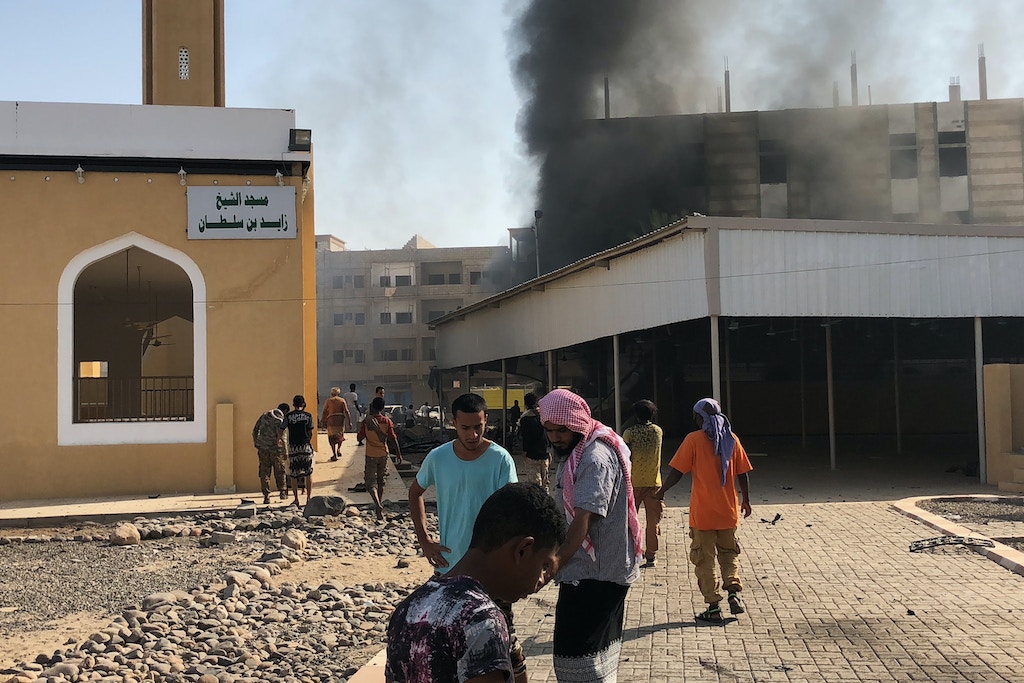 Yemenis gather at the scene of an explosion near a security post in the southern port city of Aden on November 14, 2017.

Under Trump, counterterrorism attacks have surged. A widely criticized raid a week after he took office ended in the deaths of one Navy SEAL and at least 16 Yemeni civilians. Drone strikes tripled from 2016 to 2017. In January 2018, U.S. forces conducted 10 airstrikes targeting AQAP and ISIS.

There is evidence that strikes may have been effective in weakening these groups, according to Kendall, who monitors extremist social media and news reports.

“Right now, both groups are under so much pressure,” Kendall told The Intercept.

She has tracked AQAP commanders killed by drones replaced by increasingly younger men and both groups changing tactics. According to her research, AQAP has shifted its target from the Houthis to the UAE-backed military, because of the threat it posed to the extremist group. ISIS moved from civilian suicide bombings to battling Houthis – except for the spike of violence in November that killed Khaldoon.

But more than 15 years after the first U.S. airstrike in Yemen, extremists continue to evolve, and experts like Kendall and Feierstein are quick to point out that counterterrorism attacks fail to address the root causes of extremism, fueled by political instability and the current humanitarian crisis.

“If you’re going to achieve a longer-term success and going to actually eliminate the operational environment for these groups,” said Feierstein, “you have to be engaged in other things like institutional capacity-building, developing law and order, providing services and convincing people that their interests are best served by supporting the government and cooperating to achieve them.”

Until that is possible, Yemeni extremists are still active – and lethal. Mohamed Gahleeb said he now fears for the safety of his five children still in Yemen.

“I can’t let them stay there because they are wanted, maybe like their brother,” he said. “As they killed him, maybe they want to kill the others. I am afraid for the whole family.”

Mohamed wants to bring Khaldoon’s wife and son to the United States, but until the Supreme Court addresses the travel ban, they remain trapped between terrorism and war.

Top photo: Yemenis inspect the site of a suicide bombing that targeted the finance ministry building of the Saudi-backed Yemeni government in the country’s second city of Aden on Nov. 29, 2017.