It would be a special irony if Special Counsel Robert Mueller took down Jared Kushner over his financial solicitations with Qatar. 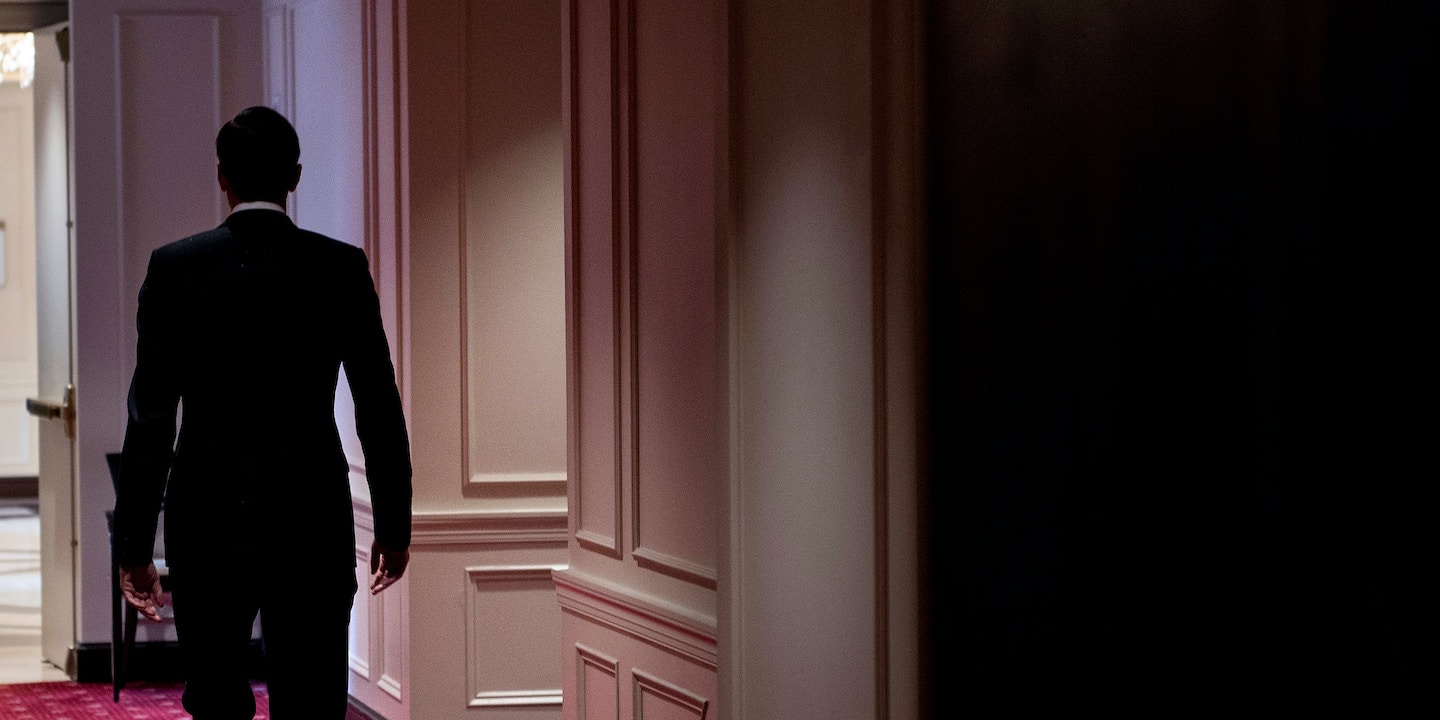 Special Counsel Robert Mueller is probing senior White House aide Jared Kushner’s attempts to secure financing for a distressed Manhattan property after the 2016 election, including pitches made to investment firms from China and Qatar, several news outlets reported this week.

The attempt by Jared Kushner’s father Charles to secure funding from Qatar before and after Donald Trump’s election — up until the spring of 2017 — was first reported in July by The Intercept and later confirmed publicly by a Kushner Companies spokesperson.

The property that is now tied up in Mueller’s probe, as well as linked to a diplomatic crisis in the Middle East, sits at 666 Fifth Ave., and was bought by Kushner at the height of the housing bubble for what was even then considered an inflated price of $1.8 billion.

The building is now severely underwater and if Kushner can’t find refinancing sometime in 2018, the property risks blowing a hole in the family balance sheet. Kushner has worked doggedly to fend off that reckoning, talking with prospective investors around the globe.

As The Intercept reported last July, Charles Kushner solicited funds from Qatar’s former Prime Minister Sheikh Hamad bin Jassim, known as HBJ, who now runs the investment firm Al Mirqab Capital. The Qatari businessman pledged to provide Charles Kushner, then heading Kushner Companies in Jared’s place, with $500 million in capital provided Kushner was able to raise the rest of the multibillion-dollar refinancing elsewhere. Charles Kushner reportedly turned to China’s Anbang Insurance Group for an additional $400 million, but the holding company pulled out of the deal in March 2017 following conflict of interest claims. Left in the lurch, we now know that Jared Kushner just weeks later devised a plan with Saudi Arabia to form a coalition with the United Arab Emirates, Egypt, and Bahrain to jump Qatar, an unexpected move given the Qatari emir had joined Trump in Riyadh just weeks before the blockade started, where no issues were raised with Qatar about any of its policies or relationships.

Trump publicly took credit for the diplomatic attack on Qatar, and when Secretary of State Rex Tillerson tried to walk it back, Trump doubled down, issuing an additional aggressive statement that Tillerson would later say he suspected was the work of Kushner and his regional ally, Yousef al-Otaiba, the UAE ambassador to the United States.

CNN reported that the special counsel has not requested documents or records related to the hunt for cash for 666 Fifth Ave., a claim repeated to The Intercept by a source at Kushner Companies. Abbe Lowell, an attorney for Kushner, dismissed the CNN report. “Another anonymous source with questionable motives now contradicts the facts — in all of Mr Kushner’s extensive cooperation with all inquiries, there has not been a single question asked nor document sought on the 666 building or Kushner Co deals. Nor would there be any reason to question these regular business transactions,” Lowell said in a statement.

But that could hardly be evidence that Mueller is not taking action, given he would be unlikely to telegraph his pivot toward the company’s activities in the open. As indicated by last week’s indictment of 13 Russian nationals accused of sowing information warfare to help get Trump elected shows, the special counsel is carrying out his investigation discreetly and is making surprise moves. Mueller could obtain a substantial body of records without Kushner’s immediate knowledge by sealed subpoena and search warrants for stored electronic communications. Mueller could also invite Kushner’s father or other involved Kushner Company officials to testify before these secret grand jury proceedings. This was a prospect that former Trump aide Steve Bannon commented on in “Fire and Fury” by Michael Wolff. In it, Bannon is quoted, with the ellipses:

“Charlie Kushner,” said Bannon, smacking his head again in additional disbelief. “He’s going crazy because they’re going to get down deep in his shit about how he’s financed everything … all the shit coming out of Israel … and all these guys coming out of Eastern Europe … all these Russian guys … and guys in Kazakhstan. … And he’s frozen on 666 [Fifth Ave.]. … [If] it goes under next year, the whole thing’s cross-collateralized … he’s wiped, he’s gone, he’s done, it’s over. … Toast.”

Kushner’s hand in Middle Eastern affairs hasn’t worked out well for the United States or for the countries that took on Qatar by severing diplomatic ties in June. Saudi Arabia and its allies relied on a website hack and a smear campaign about Qatar’s warming relationship to regional foe Iran to justify the escalation. The Washington Post reported that the hack had been carried out at the direction of the United Arab Emirates, citing U.S. intelligence officials. Isolated by its neighbors, Qatar turned to Iran and Turkey to survive a monthslong air, land, and sea blockade. The kingdom’s claim that Qatar was fomenting extremism was roundly mocked in Washington. Now, the United States — ironically, the very country that enabled the fracas — appears to be re-aligning itself with the isolated Gulf nation. Just weeks ago, Trump praised Qatar for fighting terror, while Tillerson and Defense Secretary James Mattis kicked off the inaugural United States-Qatar Strategic Dialogue.

Bannon, the “alt-right” nationalist and one of the prime anti-Qatar agitators, is no longer in the White House. Bannon reportedly declined to provide evidence to the House Intelligence Committee that is investigating Russian election interference, so as not to interfere with his ongoing testimony in Mueller’s criminal probe. Bannon reportedly met Mueller and FBI agents several times last week. It is widely known that Bannon had a particular hatred of “Javanka,” the portmanteau for Jared Kushner and Trump’s daughter Ivanka Trump. If Bannon has any information that would incriminate Kushner’s or Trump’s families, some of whom he described as “treasonous” in “Fire and Fury,” there’s little reason to think he’d sit on it.

That could plainly be of worry for Trump, but Kushner too. Given the failure of the siege against Qatar and the bizarre moves by its Gulf Arab protagonists — including Saudi’s hostage taking of Lebanon’s prime minister — well-placed sources said Trump has largely sidelined his son-in-law, who conducted most of his disastrous diplomacy in secret with Saudi Arabia’s Crown Prince Mohammed bin Salman.

Wolff’s recent tell-all disclosed that it was Trump’s innermost circle, including Bannon and Kushner, who devised the early summer 2017 foreign policy coup in the Arab Gulf to “change the conversation” away from Mueller’s probe into alleged collusion between the Trump campaign and Russia. Since last June, MBS has brutally kneecapped internal opposition to consolidate power, while encouraging the prolonged travel and trade isolation of Qatar.

Not all is falling apart for Kushner, however. White House Chief of Staff John Kelly recently sent a memo signaling that anybody working in the building without a permanent security clearance needed to get one soon or move on. But that, he has since clarified, doesn’t apply to Kushner.

“I will not comment on anybody’s specific security clearance situation or go beyond the memo released last week,” Kelly said in a statement first reported by The Intercept. “As I told Jared days ago, I have full confidence in his ability to continue performing his duties in his foreign policy portfolio including overseeing our Israeli-Palestinian peace effort and serving as an integral part of our relationship with Mexico. Everyone in the White House is grateful for these valuable contributions to furthering the President’s agenda. There is no truth to any suggestion otherwise.”

Top photo: Senior Advisor Jared Kushner walks to a meeting with Qatar’s Emir Tamim bin Hamad al-Thani and US President Donald Trump at the Palace Hotel on September 19, 2017 in New York City, on the sidelines of the United Nations General Assembly.