“Comparing athletes to prisoners is contemptible.” 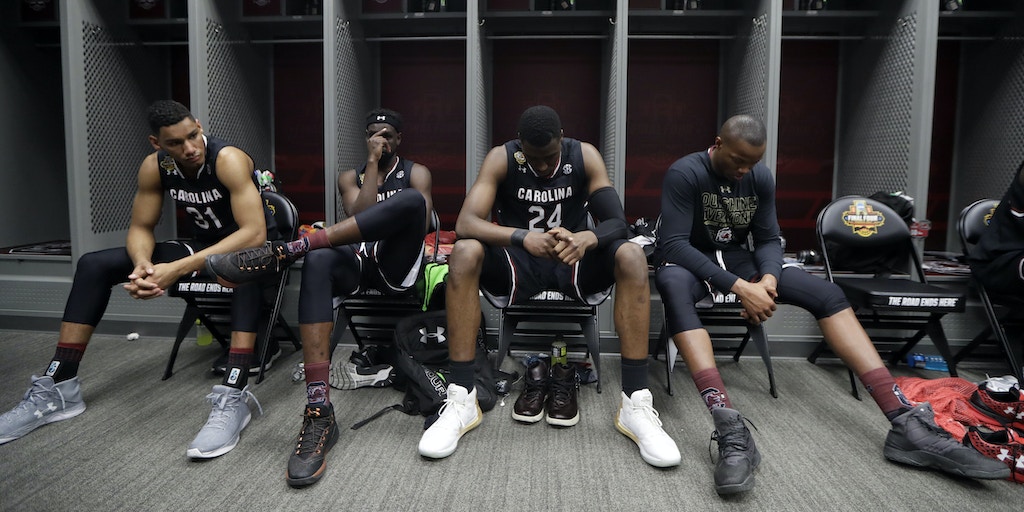 South Carolina players sit in the locker room after the semifinals of the Final Four NCAA college basketball tournament against Gonzaga, Saturday, April 1, 2017, in Glendale, Arizona.

In the United States, college athletes — particularly those who compete at some of the largest football and basketball programs — generate not millions but billions of dollars for universities, brands, and television networks. In 2015, the top programs made a combined $9.1 billion. The NCAA, for its part, just signed an $8.8 billion-dollar deal with CBS to air March Madness, the college basketball championship tournament.

College sports is a business – a very lucrative business.

That very obvious dynamic undergirds a lawsuit filed by former NCAA athlete Lawrence “Poppy” Livers asserting that scholarship students who play sports are employees and deserve pay. The Livers case argues that student-athletes who get scholarships should at least be paid as work-study students for the time they put in.

What the NCAA did in response to the lawsuit is as vile as anything going on in sports right now.

What the NCAA did in response to the lawsuit is as vile as anything going on in sports right now. I had to see it for myself before I believed it. At the root of its legal argument, the NCAA is relying on one particular case for why NCAA athletes should not be paid. That case is Vanskike v. Peters.

Only there’s an important detail: Daniel Vanskike was a prisoner at Stateville Correctional Center in Joliet, Illinois, and Howard Peters was the director of the Illinois State Department of Corrections. In 1992, Vanskike and his attorneys argued that as a prisoner, he should be paid a federal minimum wage for his work. The court, in its decision, cited the 13th Amendment and rejected the claim.

The 13th Amendment is commonly hailed as the law that finally ended slavery in America. But the amendment has an important carve-out: It kept involuntary service legal for those who have been convicted of a crime. “Neither slavery nor involuntary servitude, except as a punishment for crime whereof the party shall have been duly convicted, shall exist within the United States, or any place subject to their jurisdiction,” the amendment says. It’s that phrase — “except as a punishment for crime” — that allows American prisons to force inmates to do whatever work they want or need them to do.

The use of the case stems from several other law cases alleging unpaid labor; two of them are previous lawsuits against the NCAA in which the case was cited as precedent, and the NCAA won.

In their response to the NCAA’s motion to dismiss, Livers’s lawyers are arguing that the precedent was mistaken for applying the 13th Amendment exception for unpaid prison labor in a case dealing with non-prisoners.

“Defense Counsel’s insistence that Vanskike be applied here is not only legally frivolous, but also deeply offensive to all Scholarship Athletes – and particularly to African-Americans,” Livers’s rebuttal to the NCAA’s motion says. “Comparing athletes to prisoners is contemptible.”

“Comparing athletes to prisoners is contemptible.”

The NCAA is showing an incorrigible nerve to use this case, Vanskike v. Peters, as one of its justifications for not paying student-athletes. The Vanskike case has been cited in the 3rd Circuit Court of Appeals 14 times before, but in each of those 14 cases, there were prisoners arguing that they should be paid a fair wage for their work.

Yet the NCAA wants to rely on this case and call on the 13th Amendment. The body that runs college sports wants to use a justification for the slave labor of convicted criminals to justify its outrageous greed.

This is not just bad optics. It gets to the heart of what the multibillion-dollar enterprise that is the NCAA thinks not just of its athletes, but of its core business model. It is, in essence, admitting that student-athletes are working as slave laborers and, as such, do not deserve fair compensation.

Bigotry has a way of revealing itself. And that is exactly what the NCAA — by leaning on the case of a prisoner demanding that he be paid as its justification for denying their athletes a wage of any kind — has done here. It has revealed itself to us.