When he calls for teachers to be armed, and the federal law that bans guns from schools to be repealed, Trump is singing from the NRA hymnbook. 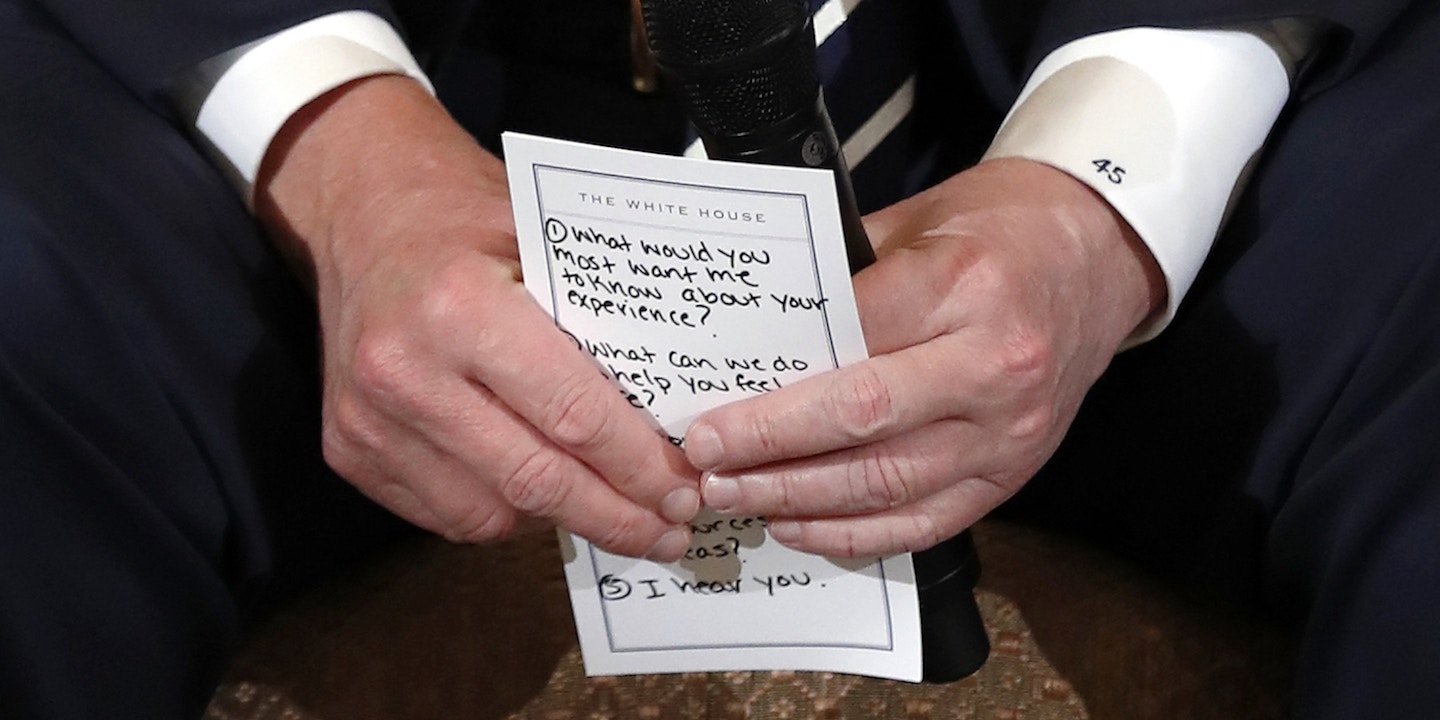 For a second straight day, President Donald Trump suggested that school shootings, like the one at Marjory Stoneman Douglas High School in Parkland, Florida, last week that claimed 17 lives, could be prevented by repealing the federal law banning guns at the nation’s schools.

At the White House now, President Trump said schools should not be gun-free zones -- but the opposite. "You come into our schools. You're going to be dead. It's going to be fast."

Speaking at the White House on Thursday, Trump ignored pleas from the Parkland survivors for a ban on assault rifles. Instead, he called for the repeal of legislation that created gun-free zones around primary and secondary schools in the 1990s to allow teachers to carry concealed weapons into classrooms. If up to 40 percent of each school’s faculty was armed, Trump said, shooting sprees could be deterred or at least quickly contained.

Today, it was my great honor to host a School Safety Roundtable at the @WhiteHouse with State and local leaders, law enforcement officers, and education officials.

There is nothing more important than protecting our children. They deserve to be safe, and we will deliver! pic.twitter.com/WhC2AxgWXO

Trump reiterated his call to arm teachers just hours after he scolded the news media for reporting, accurately, that he had made the same suggestion on Wednesday, during a meeting with survivors of the Parkland attack and other school shootings.

In his somewhat meandering remarks to the students and parents on Wednesday, Trump claimed that the federal law banning guns in schools — introduced in 1990 by a Democratic senator, Joe Biden, and signed by a Republican president, George H.W. Bush — had only served to encourage attacks. “A gun-free zone to a maniac — because they’re all cowards — a gun-free zone is, ‘Let’s go in and let’s attack, because bullets aren’t coming back at us,'” Trump said.

The most effective deterrent to such attacks, the president argued on Wednesday, would be to encourage at least “20 percent of your teaching force” to be armed and ready to engage in a firefight with any school shooter. (By Thursday, he inflated that figure, suggesting that it might be necessary to arm 40 percent of teachers.)

Trump also appeared to suggest that former soldiers might be drafted in to bolster security at schools by patrolling the halls as armed volunteers. “You’d have a lot people that’d be armed, they’d be ready, they’re professionals,” the president said. “They may be Marines that left the Marines, left the Army, left the Air Force. And they’re very adept at doing that. You’d have a lot of them, and they’d be spread evenly throughout the school.”

(It is unclear why, but Trump seemed to be convinced that about 20 percent of the nation’s teachers are already “adept” at firing guns. It seems possible that he misheard or misremembered the statistic that about 20,000 veterans have become teachers since 1993. Given that there are about 3.6 million teachers in K-12 schools in the United States, however, that means that less than 1 percent of them actually have military training.)

Trump’s idea to send in the ex-Marines, like his plan to repeal gun-free zones around schools, was first floated by the National Rifle Association. Speaking in the aftermath of the massacre at Sandy Hook Elementary School in Newtown, Connecticut, in 2012, the NRA’s executive vice president and CEO Wayne LaPierre said that politicians were to blame for passing laws for gun-free school zones. “They issue press releases bragging about them, they post signs advertising them,” LaPierre said. “And in doing so, they tell every insane killer in America that schools are the safest place to inflict maximum mayhem with minimum risk.”

By Thursday afternoon, Trump was telling people drafted in to listen to his spitballing on the subject that gun-free zones were an inducement, like free ice cream, to prospective school attackers.

TRUMP ON GUNS: President @realDonaldTrump says gun-free zones are "like going in for ice cream" for killers and the president believes volunteer teachers who are well-trained with firearms should carry concealed guns in schools. Thoughts? https://t.co/ZoxJLVJ85s @POTUS pic.twitter.com/iStdBDNo43

The claim that gun-free zones encourage shooting sprees is not supported by any evidence, however. “Among the 62 mass shootings over the last 30 years that we studied,” Mother Jones reported in 2013, “not a single case includes evidence that the killer chose to target a place because it banned guns.”

“To the contrary,” the magazine noted, “in many of the cases there was clearly another motive for the choice of location. For example, 20 were workplace shootings, most of which involved perpetrators who felt wronged by employers and colleagues. … Or consider the 12 school shootings we documented, in which all but one of the killers had personal ties to the school they struck.”

A separate analysis, carried out by researchers at Everytown for Gun Safety, looked at 156 mass shootings that took place between January 2009 and December 2016, finding that only 10 percent of the incidents took place in gun-free zones. “The vast majority of incidents — 63 percent — took place entirely in private homes,” the researchers reported.

In his post-Newtown remarks in 2012, LaPierre had suggested that NRA members should be deputized to patrol the nation’s schools. “The National Rifle Association knows there are millions of qualified and active, retired police, active, reserve, and retired military, security professionals, certified firefighters, rescue personnel,” LaPierre said, “an extraordinary corps of patriotic, trained, qualified citizens to join with local school officials and police in devising a protection plan for every single school.”

Four months after the massacre at Newtown, an NRA task force backed away from the idea of having armed volunteers patrol schools but recommended that at least one member of each school’s faculty or administration carry a gun.

During a speech at the Conservative Political Action Conference on Thursday, LaPierre reiterated his criticism of gun-free zones at schools and called for schools to be “hardened” with armed security.

LaPierre’s comments were quickly condemned by gun control advocates, but echoed by the president.

"Every day, young children are being dropped off at schools that are wide open, soft targets for anyone hellbent on murder. Schools must be the most hardened targets," @NRA's Wayne LaPierre at CPAC.

Gun manufacturers would profit immensely from militarizing our schools.

Trump has been singing from the NRA’s hymnbook on school shootings for some time. During his campaign for the Republican presidential nomination, Trump repeatedly promised to eliminate gun-free zones around schools — even ones that did not exist.

Speaking in the aftermath of a 2015 massacre at Umpqua Community College in Roseburg, Oregon, where a gunman had killed nine people, Trump mistakenly claimed the campus “was a gun-free zone.”

In fact, the federal law banning guns from K-12 schools has never applied to colleges, and Oregon state law allows students with permits to carry guns on college campuses. Still, Trump claimed, “If you had a couple of the teachers or somebody with guns in that room, you would’ve been a hell of a lot better off.”

Later in the campaign, Trump also falsely suggested that the legal ban applied to military bases. “You know what a gun free-zone is to a sicko?” Trump asked at a rally in New Hampshire on January 7, 2016. “That’s bait.”

In an interview with the Outdoor Channel two weeks later, Trump reiterated that promise. “Gun-free zones are like holding up candy to a baby,” he told the editor of Petersen’s Hunting magazine, Mike Schoby. “You say you have a school, and it’s gun free. The criminals are out there saying, ‘This is incredible. This is perfect. There’s no guns in there.'”

“The whole concept of gun free is a basic disaster,” Trump said, “and we’re going to do something to end it.”

Strangely, when his general-election opponent Hillary Clinton condemned Trump in 2016 for having promised to eliminate gun-free zones and suggesting that teachers should be armed, he claimed on Twitter that the charge was false.

Crooked Hillary said that I want guns brought into the school classroom. Wrong!

The next day, however, Trump appeared on Fox and Friends to both deny that he wanted armed teachers and to clearly call for teachers to be armed.

Updated: Friday, Feb. 23, 6:30 a.m. This post was updated to add video of Donald Trump comparing gun-free zones around schools to offering a treat, like ice cream, to potential school shooters.