The messaging handouts made clear where the party wants candidates to stand on health care reform: preferably nowhere, but not with single-payer advocates. For Democrats in Washington, the question of how to talk to voters about health care is a vexing one.

In the wake of the election, the Democratic Congressional Campaign Committee, which works to elect Democrats to the U.S. House, commissioned a survey and analysis from Greenberg Quinlan Rosner Research and GBA Strategies to help think through health care messaging.

In April, the firm’s veteran pollster Stan Greenberg briefed House Democrats on the findings with a presentation at the offices of the Democratic National Committee.

The messaging handouts, obtained by The Intercept, made clear where the party wants its candidates to stand when it comes to health care reform: preferably nowhere, but certainly not with single-payer advocates.

The polling memorandum, produced by GBA Strategies and Greenberg’s firm, was composed by surveying 52 so-called battleground districts, half of which are currently held by Democrats and half by Republicans.

The question that Greenberg put before Democrats to make the case against single-payer, though, is a highly unusual one (emphasis in original): “If you could change one thing about your healthcare or health insurance, what would it be?”

The question was not about what kind of system the voter would prefer, but a surprising 12 percent still said they wanted their own insurance to be single-payer. Still, it’s unclear what this means in the context of the question, beyond suggesting that at least 12 percent of voters are so passionate about single-payer that they offered it as a non sequitur answer.

Take a survey: Should the Democratic Party embrace single-payer?

The plurality answered precisely as one would expect them to: They want their health insurance — premiums, deductibles, and drug costs — to be cheaper. High health insurance price is the leading complaint about former President Barack Obama’s health care law, though the high cost was a deliberate political decision by Democrats in 2009, who argued that the public’s alleged concerns about the deficit meant that public subsidies for insurance should be curtailed.

The irony, of course, is that single-payer advocates point to reams of evidence that their proposal would do all of the things voters told the pollsters they want — make health care more affordable and decrease premiums, deductibles and drug prices. It would also make the industry easier to understand. Adding these three categories together pulls in 61 percent of the population, which is also intuitive: People in general prefer a health care system that costs them less money over one that costs them more.

Mike Bocian, a principal at GBA Strategies, defended the polling method in a statement to The Intercept.

“The polling did not frame single-payer negatively. The poll did not use the word ‘socialized’ at any point. I think what you might be referring to is the chart on page three, which represents the answers to an open-ended question that asked, ‘If you could change one thing about your healthcare or health insurance, what would it be?’ As you can see, the dominant response (44 percent) was to reduce the cost of health care or prescription drugs,” he wrote in an email. “12 percent responded [with] make it single-payer, make it universal, make it socialized, make it more like Canada, or something to that effect. When we do an open-ended question, we often group the responses into like categories so that we can quantify the results.”

The memo goes on to suggest a course of action for House Democrats based on the polling — supporting tax breaks to reduce the cost of health care and allowing Medicare to negotiate drug prices (which Democrats barred in 2009 in order to win Big Pharma’s support for the Affordable Care Act):

An accompanying memo produced by Greenberg follows up with additional talking points for members of Congress to use back in their districts. It suggests focusing on criticizing Republican health care plans; “only if asked,” Democrats should focus on drug price negotiation, tax breaks for health care, and audits of insurance companies in order to reduce administrative costs. Single-payer does, however, pop up a number of times in the document, under the banner “LIKELY REPUBLICAN LINES OF ATTACK.” Members of Congress were given two pages worth of Republican and conservative attacks against Vermont Independent Sen. Bernie Sanders’ single-payer plan without being offered any sort of defense against those attacks. 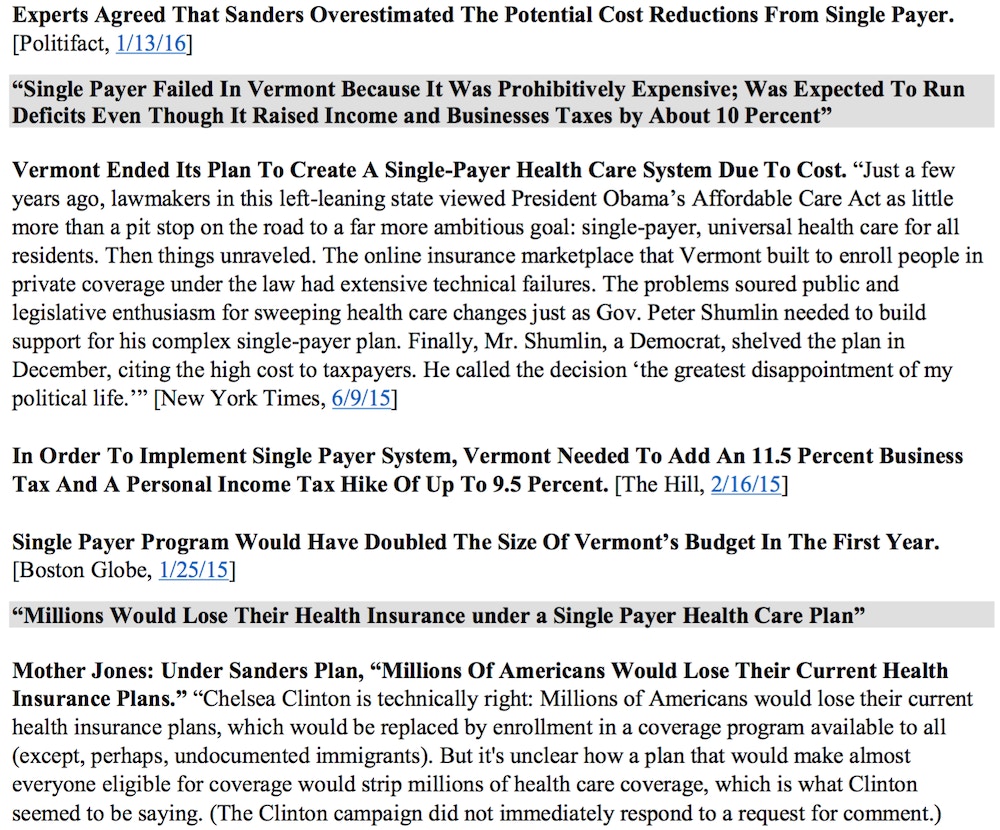 The memo cautions Democrats: “The American people overwhelmingly want Congress to improve the Affordable Care Act, not repeal it or replace it with something radically different. We need to offer reasonable solutions to improve the law instead of a massive overhaul.”

Greenberg is the spouse of Connecticut Democratic Rep. Rosa Delauro. She is not one of the 121 House Democrats who back the single-payer legislation before Congress, and one of only 11 members of the Congressional Progressive Caucus who did not sign the bill.

In a comment to The Intercept, Greenberg noted that Alan Quinlan, a partner at his firm, led the work on the poll. On the firm’s website, Quinlan lists Blue Cross Blue Shield of Michigan as one of his former clients.