As most 2020 contenders skipped the D.C. conference of pro-Israel lobby AIPAC, Kamala Harris attended an off-the-record meeting there. 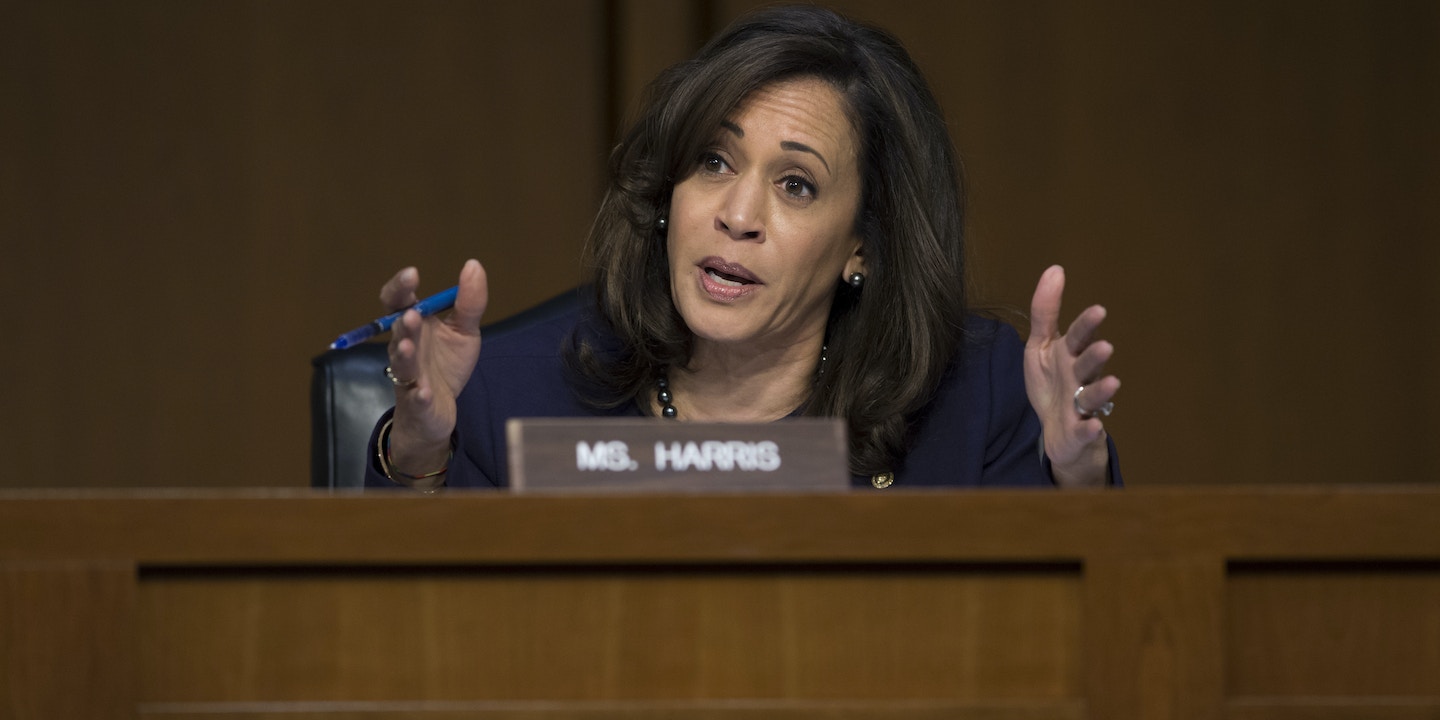 California Democratic Sen. Kamala Harris gave an off-the-record speech at the annual conference of the American Israel Public Affairs Committee, or AIPAC, on Monday. Her speech, which emphasized the need for a strong relationship between the United States and Israel, came amid a gradual leftward shift on Israel among some members of the Democratic Party.

Democratic lawmakers are increasingly sympathetic to the plight of Palestinians; while not anti-Israel, more and more rank-and-file party members believe the U.S. should be more mindful of Israeli human rights violations. AIPAC is a powerful, pro-Israel lobbying force and has made opposition to former President Barack Obama’s Iran deal a key priority. It is also currently supporting legislation to make some support for the Palestinian-led Boycott, Divestment, and Sanctions movement — which seeks to hold Israel accountable for violations of international law — a felony.

Harris, widely considered a 2020 presidential contender, spoke at a Monday session called “A Conversation with Senator Kamala Harris,” which was not listed on the conference’s program or website. Its occurrence was revealed in social media posts by conference attendees Avraham Spraragen, a Cornell University student, and Elan Karoll, the IlliniPAC co-president.

Had the unique privilege of hearing from @KamalaHarris (D-CA), progressive hero and a personal source of inspiration, at #AIPAC2018. As a proud member of the Democratic Party, I appreciate @AIPAC's commitment to bipartisanship. pic.twitter.com/P5Oj2gyDfW

Amazing: @KamalaHarris at @AIPAC: "As a child, I never sold Girl Scout cookies, I went around with a @JNFUSA box collecting funds to plant trees in #Israel." ????

In an email to The Intercept, AIPAC Director of Communications Beth Robbins said she had no recording of Harris’s remarks. “Sen. Harris spoke in an off-the-record session,” she said. An AIPAC official later told The Intercept that the event with Harris was a breakout session for students, and that those sessions are typically off the record.

Tyrone Gayle, Harris’s press secretary, did not provide a transcript of the senator’s remarks but said that the California senator emphasized the need for U.S.-Israel ties. “Senator Harris addressed a group of students at this year’s AIPAC policy conference and participated in a student-led discussion on leadership and public service, the need for a strong U.S.-Israel partnership, and her visit to Israel last year,” he said.

Other potential Democratic presidential contenders have taken a left turn on the Israeli-Palestinian conflict. Sens. Bernie Sanders, I-Vt., and Elizabeth Warren, D-Mass. were part of a group of 10 Democratic caucus lawmakers who sent a letter last November to Israeli Prime Minister Benjamin Netanyahu demanding that he halt the impending demolition of part of a Palestinian village. A group of House Democrats have gone further, sponsoring legislation that would prohibit any U.S. military aid that Israel uses to abuse or detain children in military courts.

The letter to Netanyahu was organized by Sen. Dianne Feinstein, California’s senior senator.

Harris has taken a number of steps to ingratiate herself with the pro-Israel community. Last year, she gave a public address to AIPAC attendees, in which she repeated familiar mantras in support of the current U.S.-Israeli relationship. “Let me be clear about what I believe. I stand with Israel because of our shared values which are so fundamental to the founding of both our nations. I believe the bonds between the United States and Israel are unbreakable, and we can never let anyone drive a wedge between us,” she said. “And I believe Israel should never be a partisan issue, and as long as I’m a United States senator, I will do everything in my power to ensure broad and bipartisan support for Israel’s security and right to self-defense.”

Her national security adviser, Halie Soifer, has long been an advocate for Israel. She was the Obama campaign’s Jewish outreach liaison in Florida in 2008. “[Obama] has never wavered when it comes to Israel’s defense,” Soifer said to a group of elderly voters during that campaign. She previously worked for other notably pro-Israel members of Congress — such as former Florida Democratic Rep. Robert Wexler and Delaware Sen. Chris Coons — and advised former U.N. Ambassador Samantha Power on Israeli-Palestinian issues.

Sanders’s top foreign policy adviser, Matt Duss, is notable for being a dissenting voice on this issue. A former president of the Foundation for Middle East Peace, he testified before the Democratic Party’s platform committee in 2016. In that testimony, he called on the Democratic Party to embrace an end to the Israeli blockade of Gaza, recognize Israeli settlements as an obstacle to peace, and adopt a generally more “even-handed” approach to the conflict.

In November, about a week before the 10 senators sent the Feinstein-led letter to Netanyahu, Harris was in Israel and met with the Israeli prime minister, who shared a photograph from the meeting on Twitter. U.S. lawmakers have a long history of visiting Israel, the largest recipient of U.S. military aid.

Today I met with Senator @KamalaHarris of California. We discussed the potential for deepening cooperation in water management, agriculture, cyber security, and more. I expressed my deep appreciation for America's commitment to Israel's security. ???? pic.twitter.com/L5qdcgwWG0

Netanyahu’s tweet provoked some consternation from progressives on Twitter, who lambasted the senator for her relationship with Netanyahu. A few days later, Harris briefly met with Palestinians studying at Jerusalem’s Al-Quds University. These students relayed stories of how the occupation inhibits their freedom of movement and prevents them from reaching their potential. Harris shared an article about that meeting on her Twitter timeline:

Before Thanksgiving, I visited with students at Al-Quds University on a trip to Israel. Visiting with these students was one of the many highlights of my trip. https://t.co/W1Tjwhxb7R

Unlike some of her counterparts in the Senate, she has not publicly made any demands of Israel or Netanyahu regarding the human rights of Palestinians.

Sens. Kirsten Gillibrand of New York and Cory Booker of New Jersey — who are also stridently pro-Israel Democrats and potential 2020 contenders who did not sign onto the Feinstein letter — did not make any publicly scheduled appearances at the AIPAC conference, despite attending in the past. An AIPAC official said neither senator was scheduled to speak, but that conference attendees met with them at their Capitol Hill offices on Tuesday. (On Twitter, a conference attendee said he spotted Booker.)

Prior to the event, The Intercept asked their offices if they would be attending but received no reply. Sanders’s office did offer a short response when asked if he would attend. “No,” Press Secretary Josh Miller-Lewis replied in a one-word email.